Originally designed in 1871 by the storied firm of Peabody and Stearns, the Ames-Webster Mansion stands, dignified and resolute as a time-honored sentinel, at the corner of Dartmouth Street and Commonwealth Avenue in Boston’s historic Back Bay neighborhood. In its early years, the residence passed through the hands of some of the city’s most influential industrial magnates and cultural benefactors, including Frederick Lothrop Ames, whose fascination with European art and fine craftsmanship resulted in the merging of artistry and architecture in his family’s urban home. 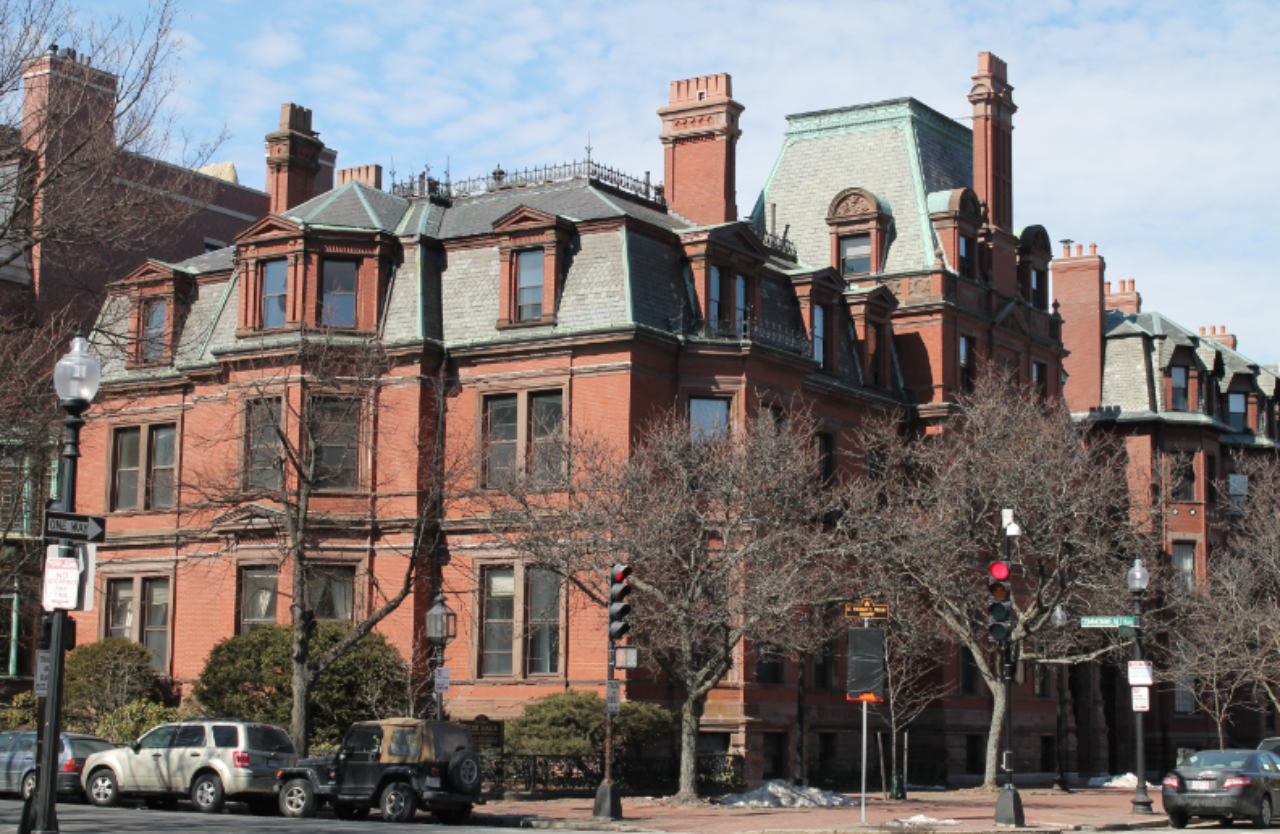 View of the Ames-Webster Mansion as seen from Commonwealth Avenue

ICAA Board of Directors member Kahlil Hamady first suggested the possibility of turning the renovation and restoration into an ICAA educational program in 2013 subsequent to his firm being offered the project by the mansion’s recent buyer. Because the renovation relies upon the participation and expertise of many specialized craftsmen, it presented the opportunity to offer lectures on a variety of aspects of restoration by those actively involved in the process.

In coordination with the Education Department, Kahlil and his colleague Leslie-jon Vickory welcomed 32 classical enthusiasts to the mansion last Friday, March 7. Traveling from as far as California to attend the course, participants instantly found themselves enveloped in 26,000 square feet of old-world grandeur. Among the residence’s 50 rooms can be found 28 fireplaces, numerous hidden passageways concealed behind ornately shelved walls, a music room complete with orchestral balcony, and an ambience fit for the world’s most intriguing game of Clue. 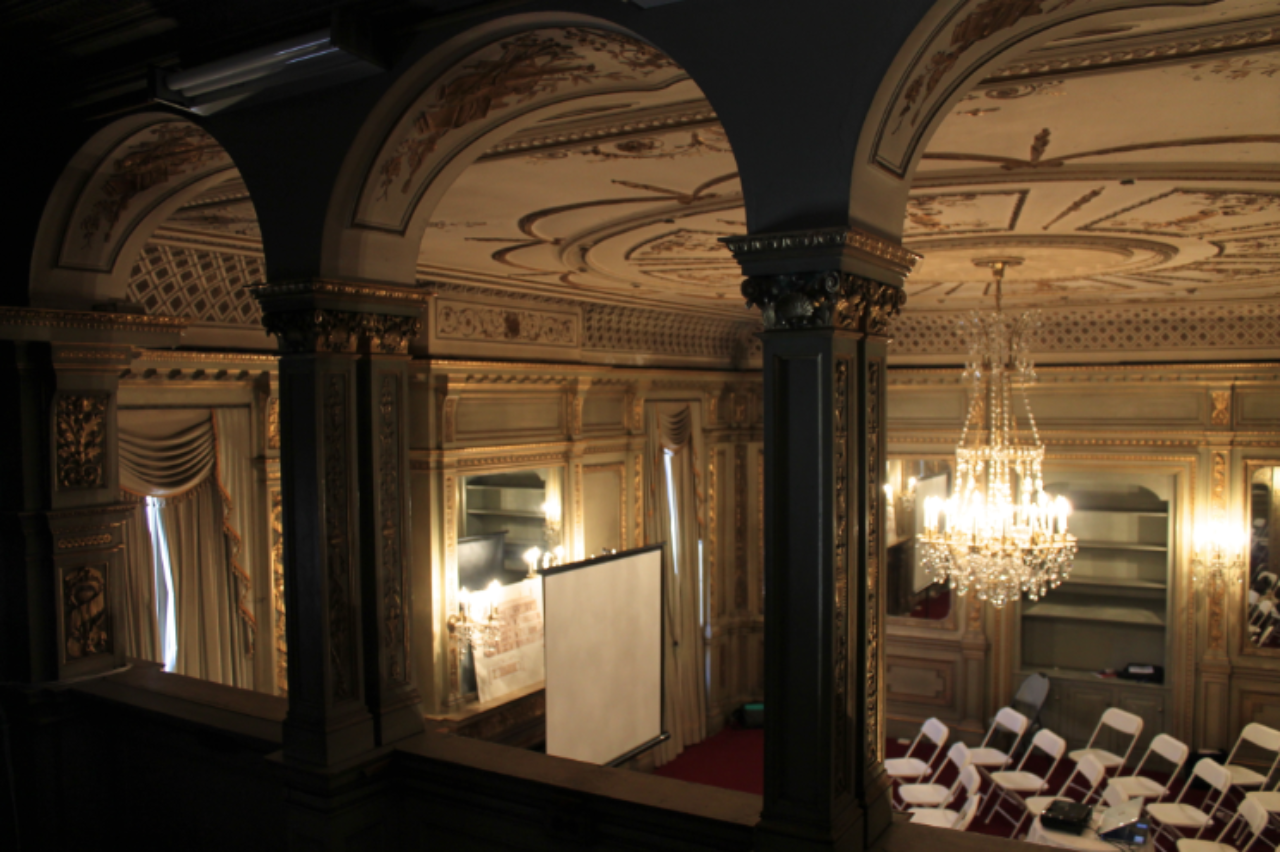 As seen from the orchestral balcony, the mansion’s music room served as the primary forum for course lectures and discussions.

Kahlil welcomed students with a poetic introduction to the building’s history and significance to the city, the relevance of which was further expanded by the presence of Frederick Ames’ grandson, whose father spent his childhood in the mansion. At the time of its construction, the building’s significance as a veritable jewel box of artistic and architectural mastery was supplemented by the dedication of its owners to the cultural development of the city as a whole. Ames, a Harvard graduate who would become owner and director of the Union Pacific Railroad and an original shareholder in General Electric, was, during his lifetime, one of the city’s most philanthropically inclined residents. A central figure in the the establishment the now world-famous Museum of Fine Arts Boston, he aimed to make the fine arts accessible to all and secure Boston’s reputation as a bastion of American refinement and learning, a reputation that persists to the present day.

In addition to Leslie and Kahlil (both of Hamady Architects), the first day of the course brought Mark Jackson, Designer and Project Coordinator for Hamady Architects; Andrea Gilmore, Director of Building Conservation Associates, Inc.; Gianfranco Pocobene, Head of Conservation at the Isabella Stewart Gardner Museum; and Roberto Rosa, Restorer and Principal of Serpentino Stained Glass before students to present the various processes, methods, and considerations central to the restoration process. 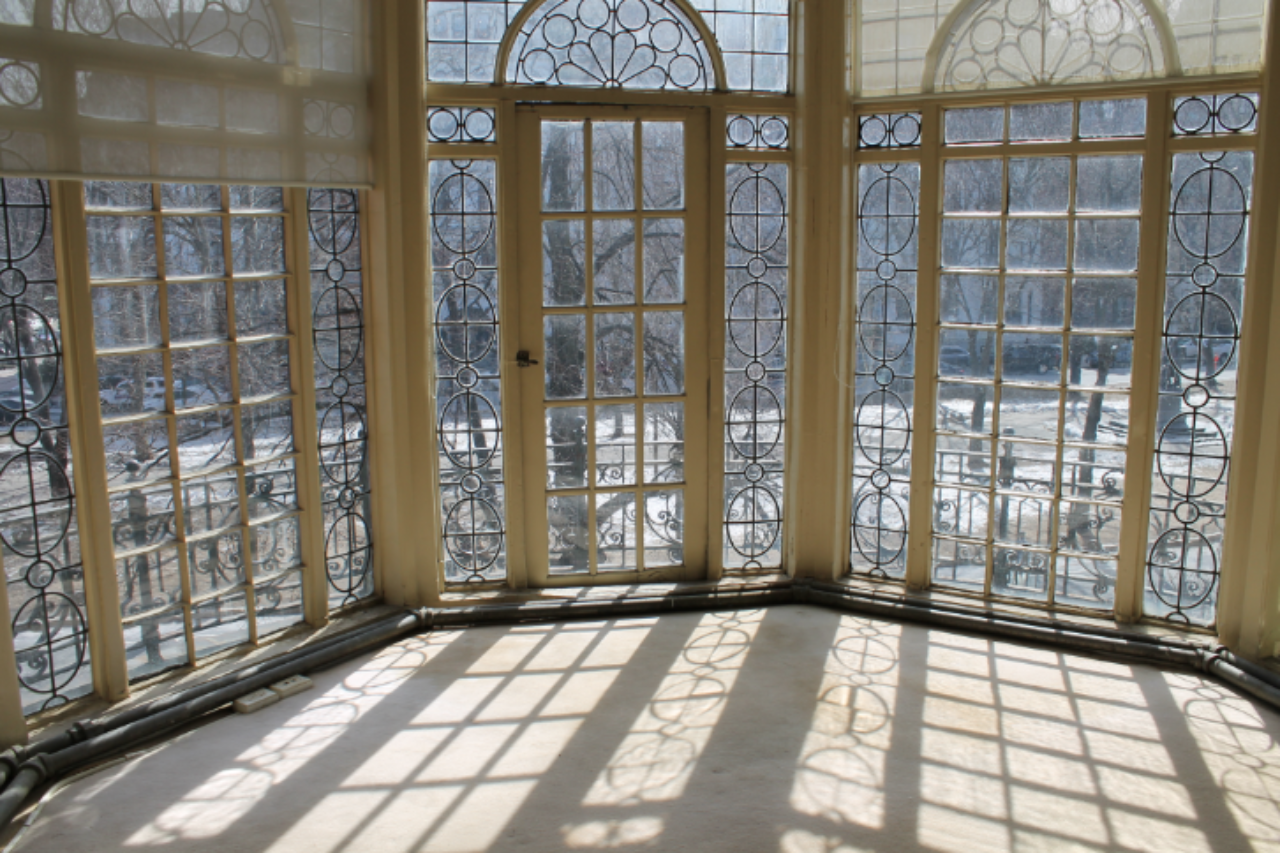 Originally crowned with a glass-domed roof, the mansion’s Commonwealth Avenue-facing conservatory is part of the section of the house that was used as corporate office space beginning in 1971.

Subsequent to Friday’s morning presentations, guests were treated to a highly anticipated tour of the property, including upstairs spaces that, for over thirty years, had been used as corporate offices – the presence of which likely saved the house from the fate of residential gutting. Highlights of the tour included an upstairs conservatory room whose ornately latticed windows cast an ever-shifting sunlit grid upon the floor; a basement that offered insight into life in the 19th Century, complete with a coal-fired washing machine, wine cellar, and a winter pantry the size of a “spacious” Manhattan apartment; and a crowning artistic achievement resulting from a timeless collaboration – the mansion’s sprawling LaFarge skylight supported by Benjamin-Constant’s delicate-yet-enduring rendering of Justinian’s council and, below that, a spirited Venetian procession. 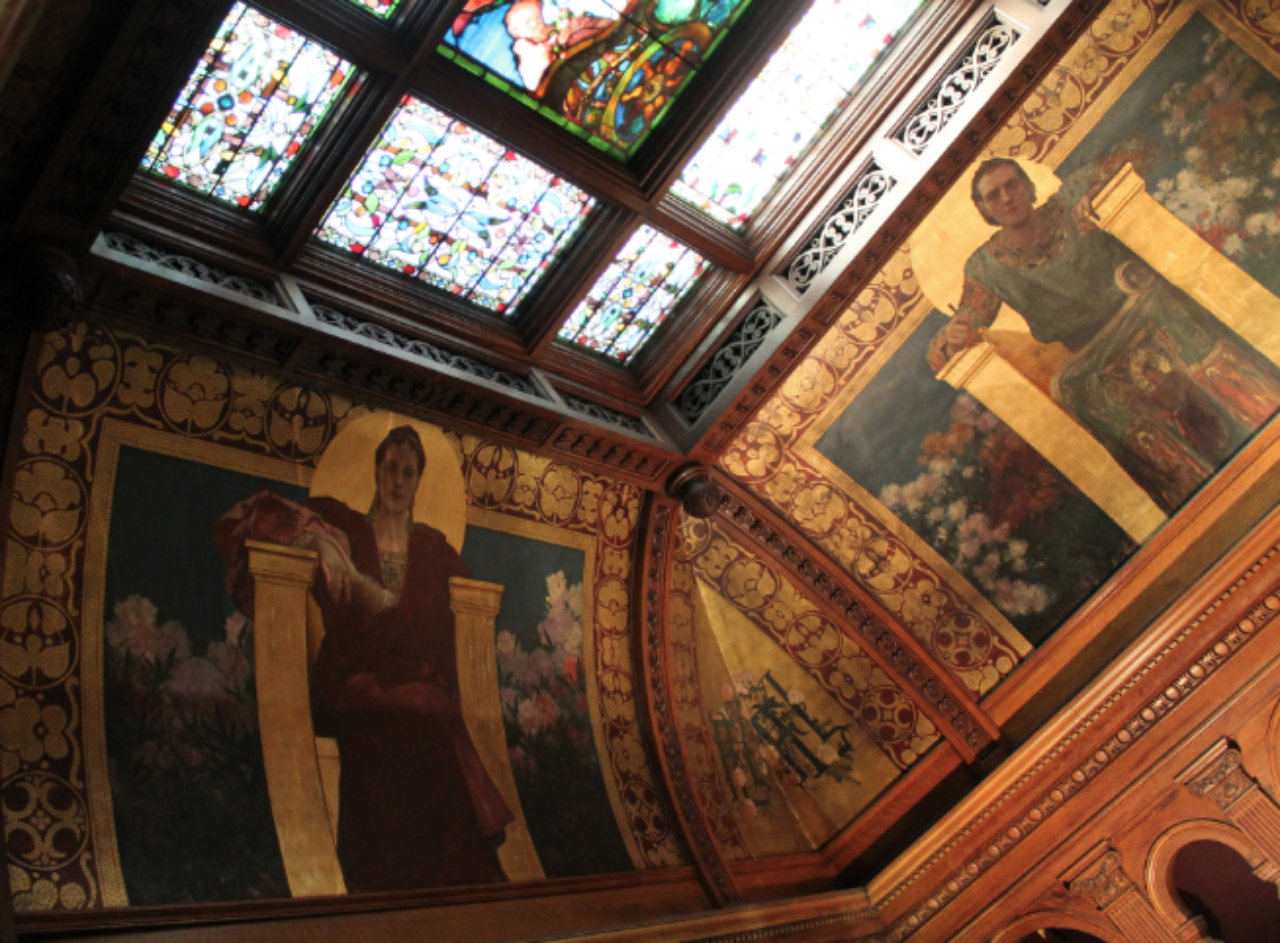 Perhaps the artistic crown jewel of the house, the LaFarge skylight and Benjamin-Constant mural of Justinian’s council is suspended above the main stairwell and is viewable at close-range from the third floor balcony.

LaFarge, a poor businessman who would die with ten dollars to his name and sizeable debt against it, began his artistic journey as a painter and muralist and only ventured into the realm of stained glass at the request of an insistent patron. Often outshined in legacy by the financially prosperous Louis Comfort Tiffany, LaFarge’s glassworks are considered by many in the industry to be of more masterful quality due to their nuanced leading techniques and exhaustive layering. Even in the smallest of window sections, LaFarge and his craftsmen often pieced as many as five individual pieces of distinctly colored glass atop one another to add complexity, depth, and richness of color  - a process which undoubtedly took much time and indicated a man who derived much joy from attention to detail.

His techniques, evident in the skylight, provide similar joy to Rosa, whose impending restoration of the Ames-Webster glass represents the continuation of a lifetime of work restoring Tiffany and LaFarge works. Gianfranco Pocobene echoed this respect for 19th and 20th Century craftsmen during his discussion of mural restoration and the work of Benjamin-Constant. Having spearheaded the time-consuming restoration of the John Singer Sargent murals at the Boston Public Library, Pocobene’s intimate knowledge of restoration techniques are the result of hundreds of hours of cleaning, touch-up, and preservation efforts. It is this knowledge that will ease the restoration of the mansion’s Benjamin-Constant murals, which remain in relatively good condition given their age and exposure to environmental conditions like humidity and fluctuating temperatures. 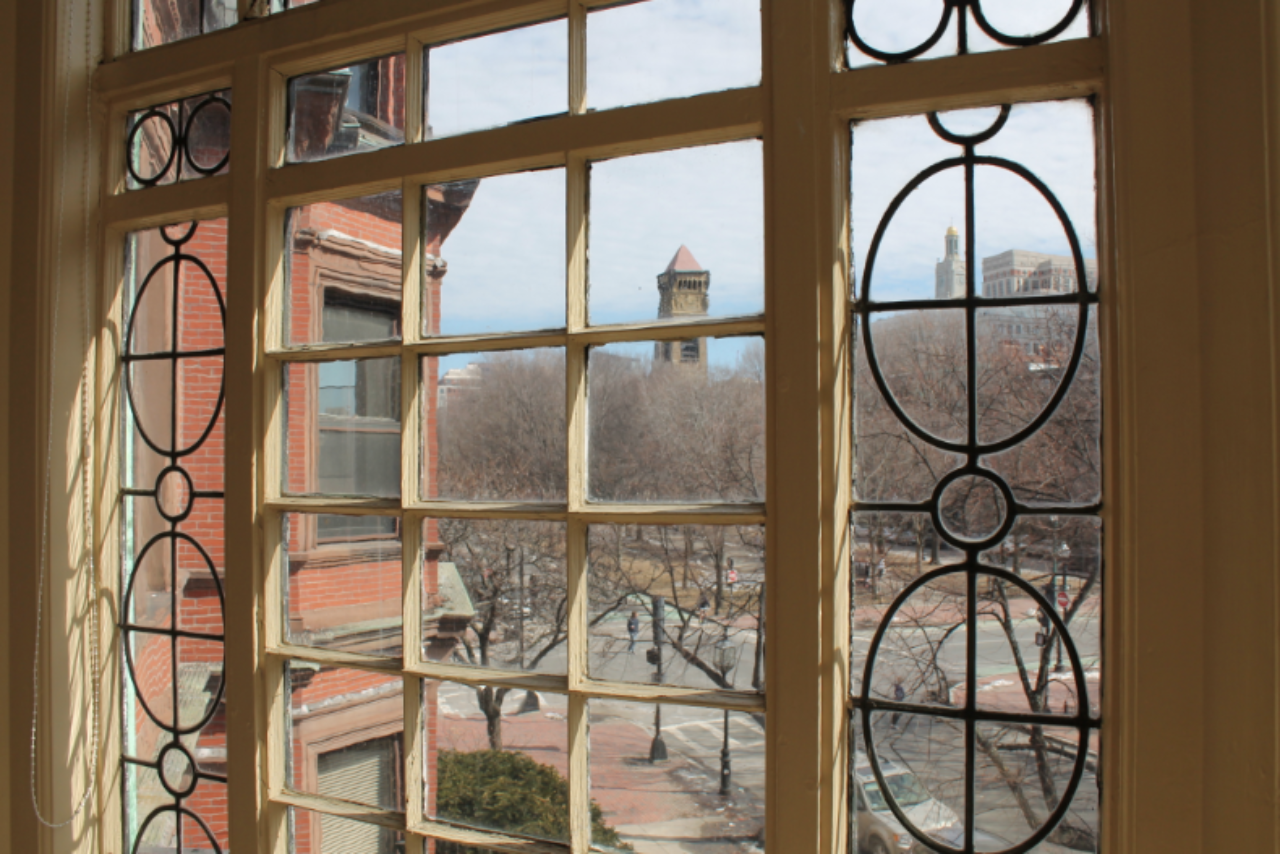 Southward view from an upstairs window

Having the benefit of a day of historical background and a crash-course in the specifics of a large-scale restoration effort, course participants arrived on Saturday eager to try their hand at rendering some of the house’s many inspiring spaces and striking decorative details. And render they did, in ink, pencil, and watercolor, creating a beautiful and personal body of work unmatched in breadth. With the intent of including some of the sketches in a future monograph of the restoration, Kahlil and Leslie-jon scanned all of the students’ works after offering technical guidance and feedback throughout the day. 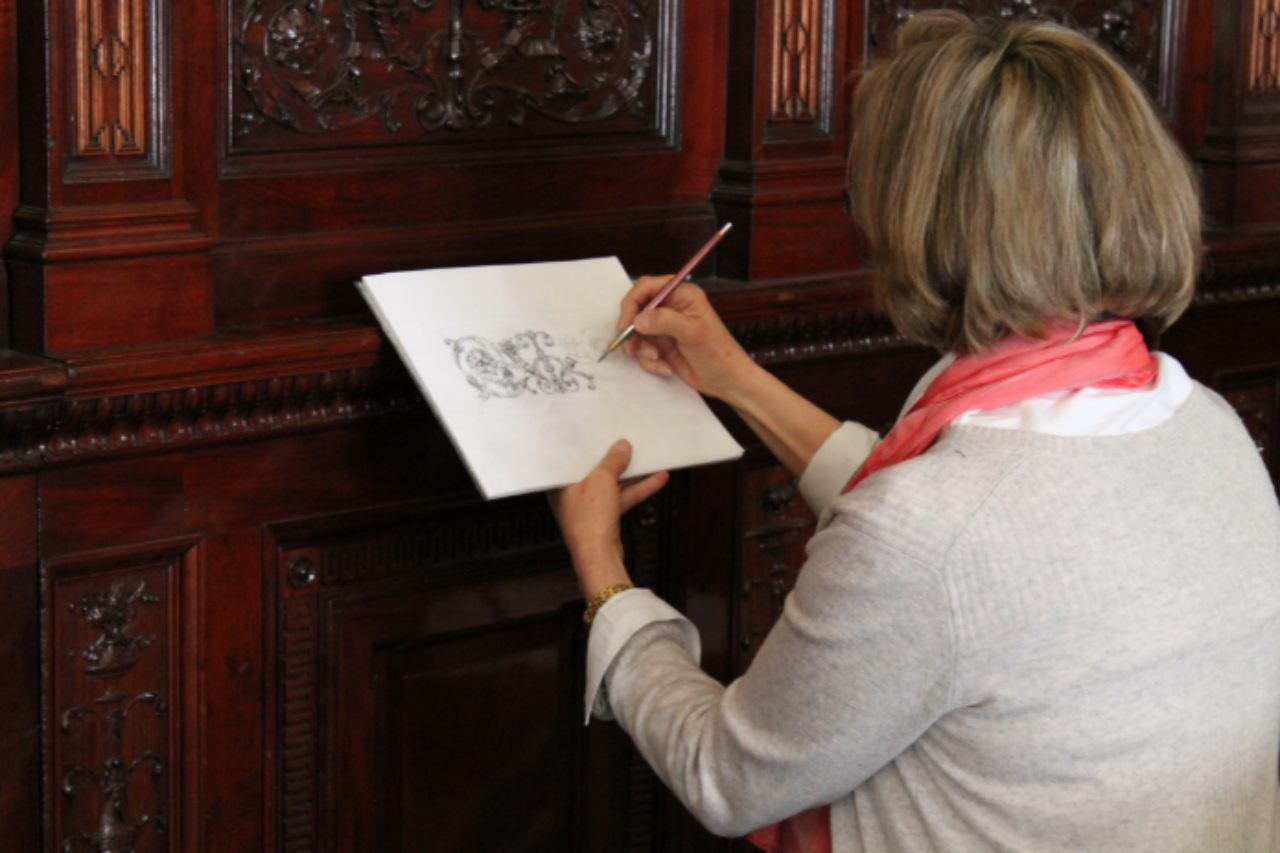 The course concluded on Saturday evening with a generous reception hosted by the New England Chapter of the ICAA and spearheaded by Chapter President John Margolis. Members of the Chapter toured the mansion prior to admiring student sketches and learning more about the restoration. 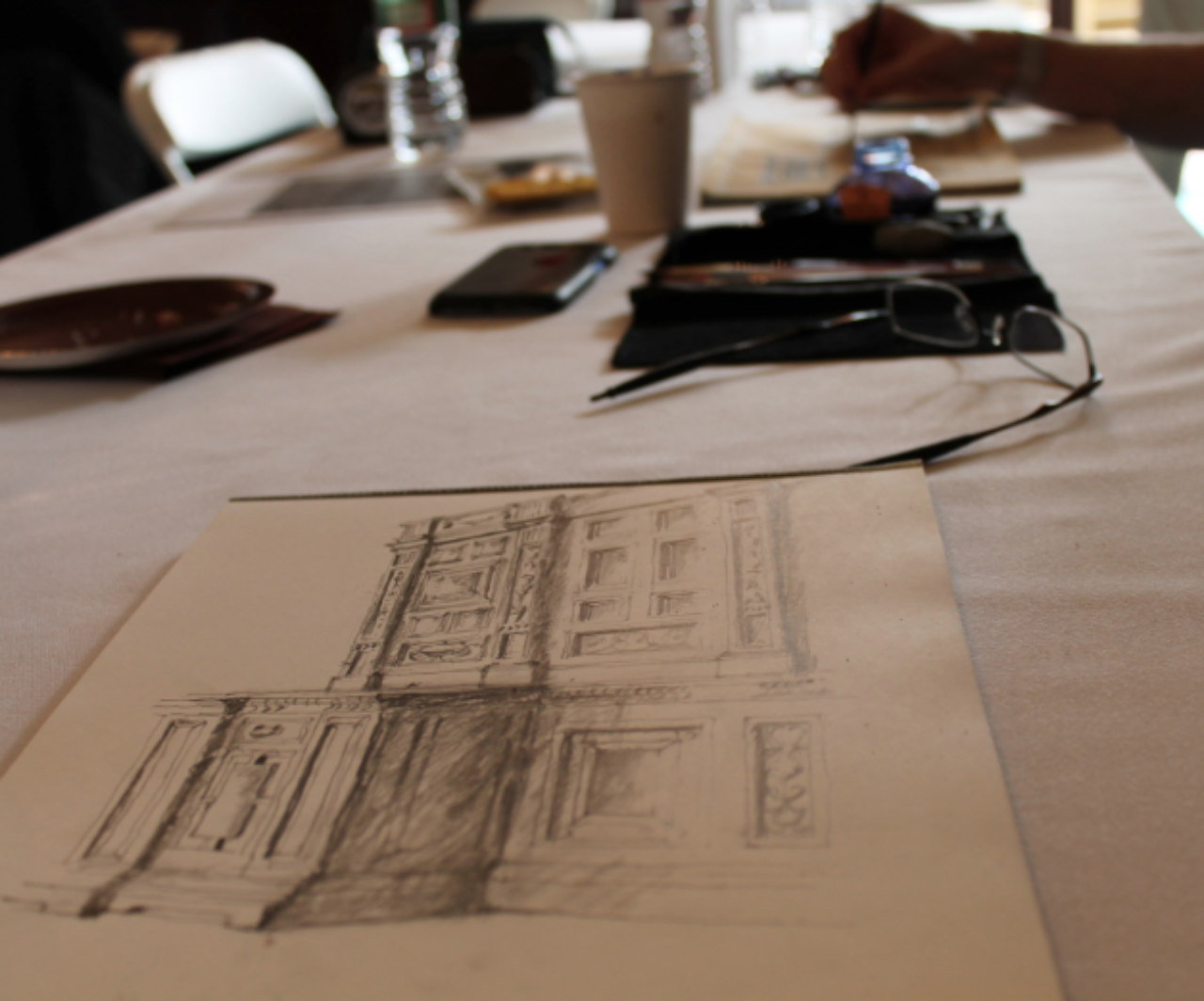 Filled with content elaborate and poignant enough to provide substance for a weeklong course, the weekend was a smashing success and sets a marvelous tone for future national education initiatives in partnership with member firms. The Education Department looks forward to many more such collaborations in the future, and would like to thank the staff of Hamady Architects, Andrea Gilmore, Gianfranco Pocobene, Roberto Rosa, Ariana McSweeney, Hugh Geiger, Frederick Ames, John Margolis, and the New England Chapter of the ICAA. Special thanks must be given to Kahlil Hamady and Leslie-jon Vickory whose hard work, generosity, and thoughtfulness transformed a course into an unforgettable forum for architectural appreciation and a celebration of the arts and those who devote their lives to them.