Follow the ICAA daily from June 5th through June 11th as we study the architecture, urbanism and landscapes of Rome through observational drawing and watercolor. The tour is led by Alexander Creswell, acclaimed watercolorist; Ben Bolgar, Senior Director at the Prince’s Foundation – London; and Selena Anders, Professor at the University of Notre Dame. Daily blog posts are provided courtesy of tour participants. 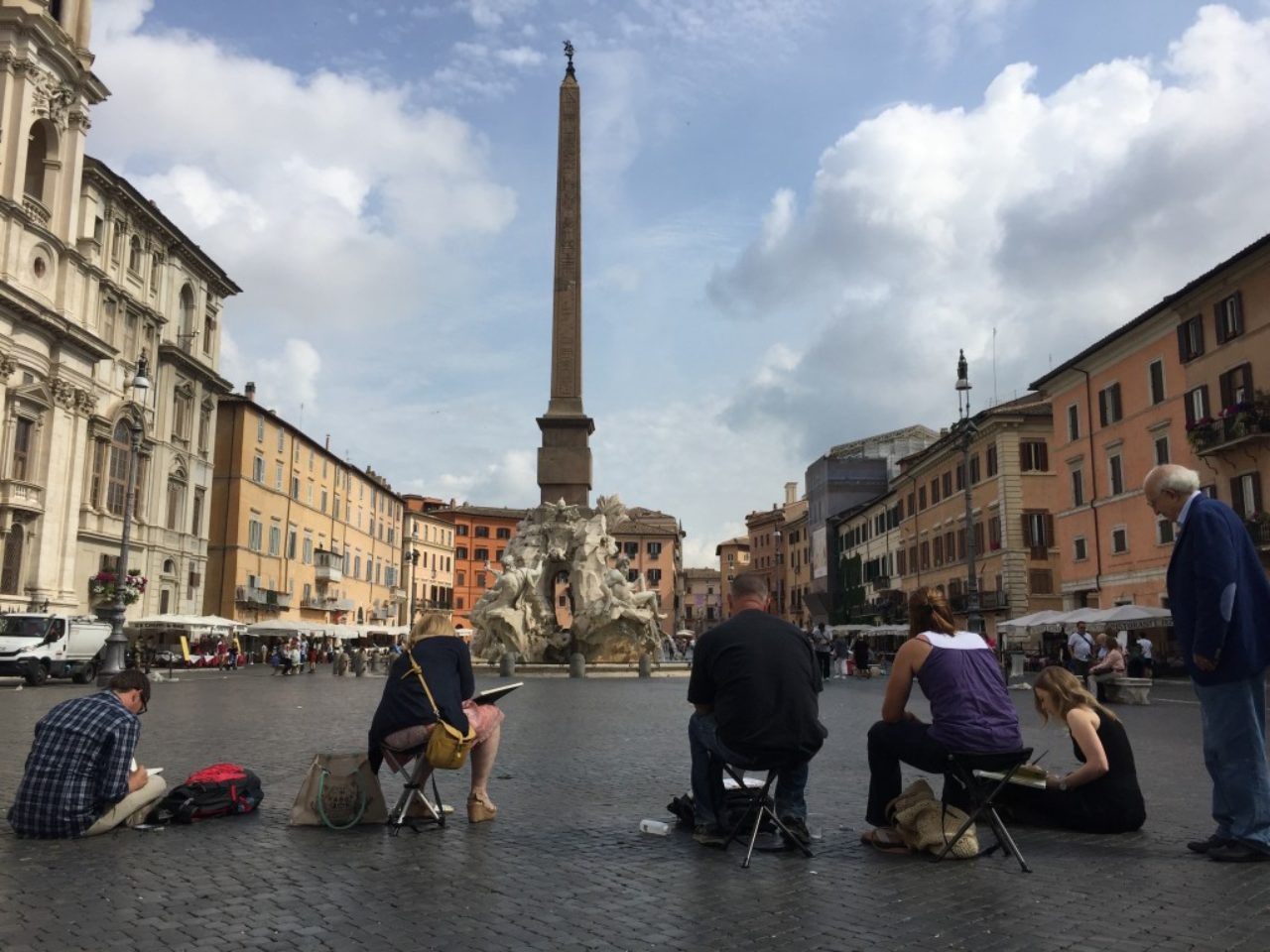 June 11th, by Rebecca Levitan: Our last day in Rome began with a return to Piazza Navona, our first sketching location. While some members of the program had risen early to sketch the piazza in depth, others arrived later to work on a series of quick sketches in pencil, pen or watercolor. For all the participants, the return to Piazza Navona was a great way to reflect on all that we had achieved in the past week. However, Alexander Caldwell was not yet content with the group resting on their laurels and had a full day planned. 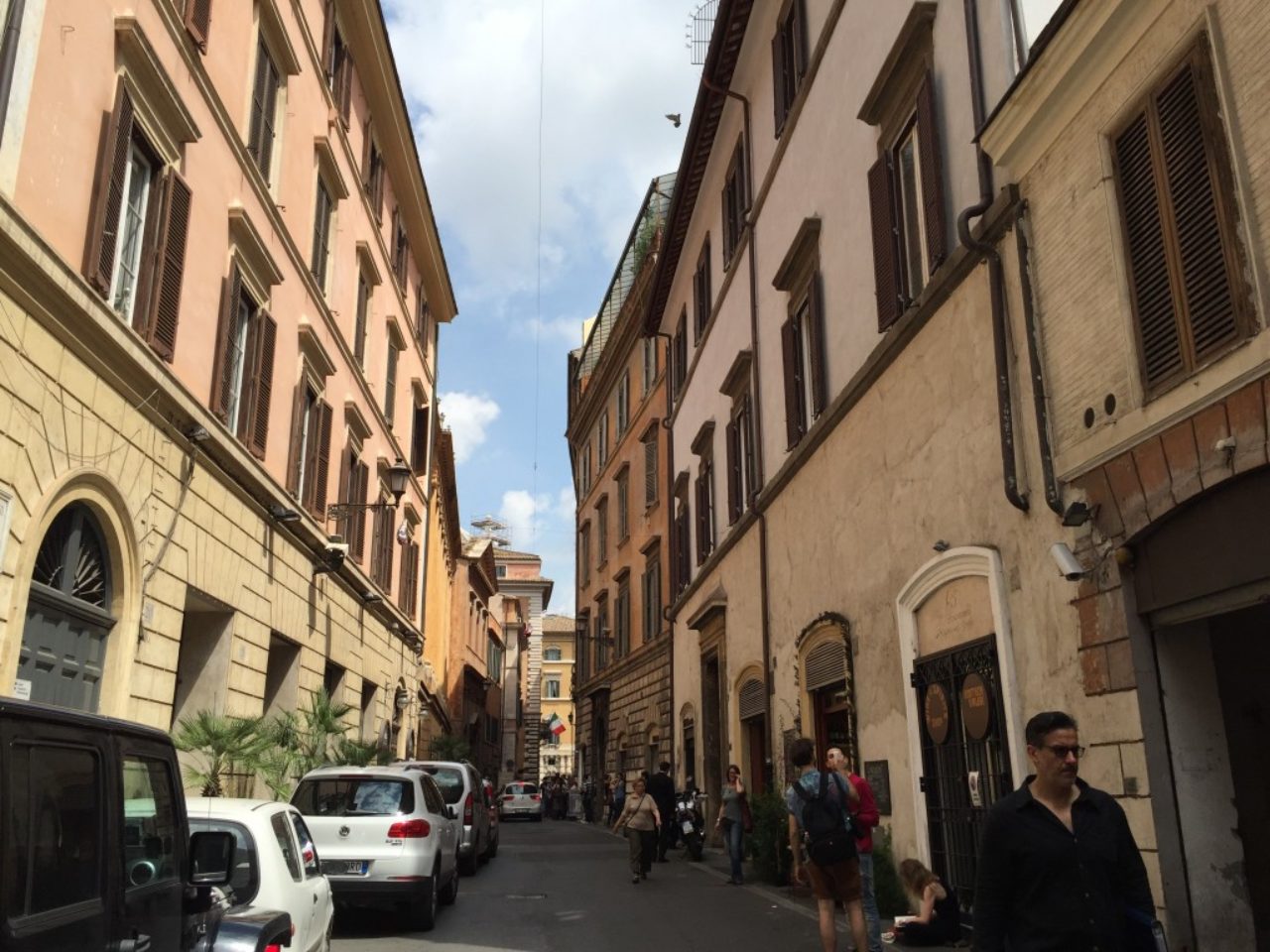 For our next activity, the group was asked to complete the very challenging exercise of drawing while walking.  The exercise called for an intense acceleration of our methods of careful observation and meticulous study, and we produced very quick sketches while moving. It was very interesting to see which details of the urban landscape the class members chose to depict along their route. The walk terminated at the church of Sant’Ivo alla Sapienza, a few streets away from Piazza Navona. Designed by Carlo Borromini, the church (specifically its intricate lantern) was the subject of our next series of watercolors. 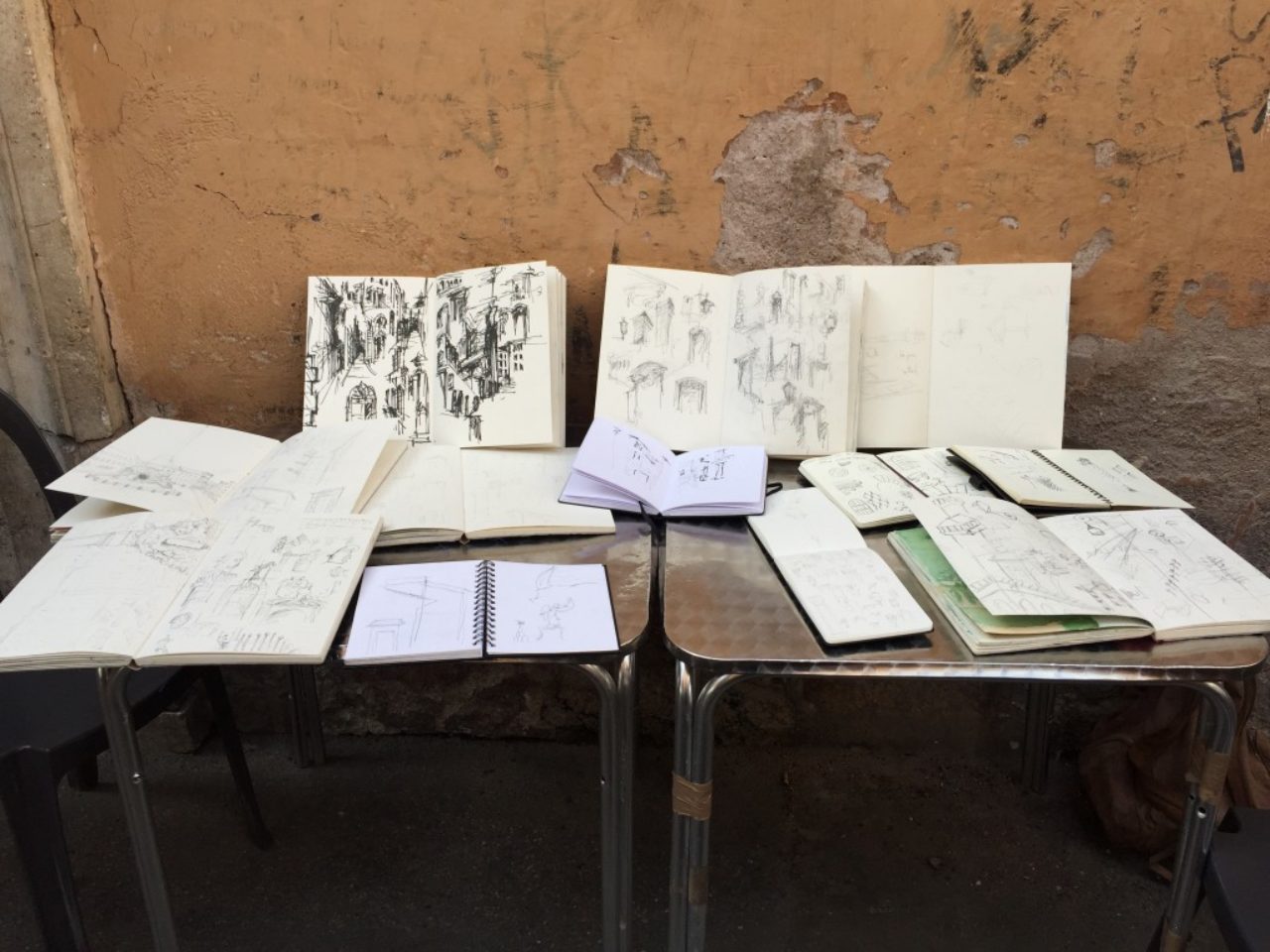 After lunch, the group visited the church, Sant’Ignazio, and this time ventured inside to work on watercolor representations of its immensely elaborate Baroque interior. After finishing this final assignment, all class members reconvened for a group critique and assessment of the notebooks. This was certainly a highlight of the class—it gave us all the opportunity to gauge our own progress and admire the work of others. Our day ended with a beautiful dinner at a restaurant in Rome’s historical Jewish Ghetto, where we tasted a renowned signature dish of fried artichokes and enjoyed our final moments together. 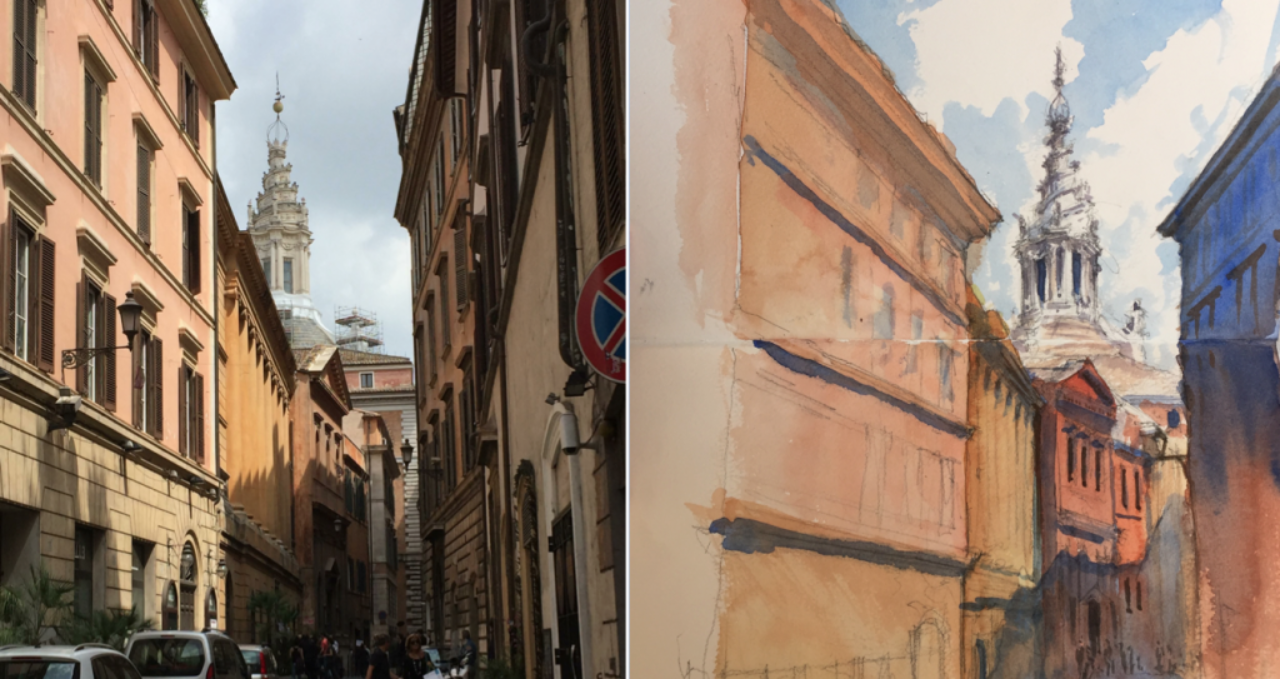 The lantern of Sant’Ivo alla Sapienza (photo and student watercolor) 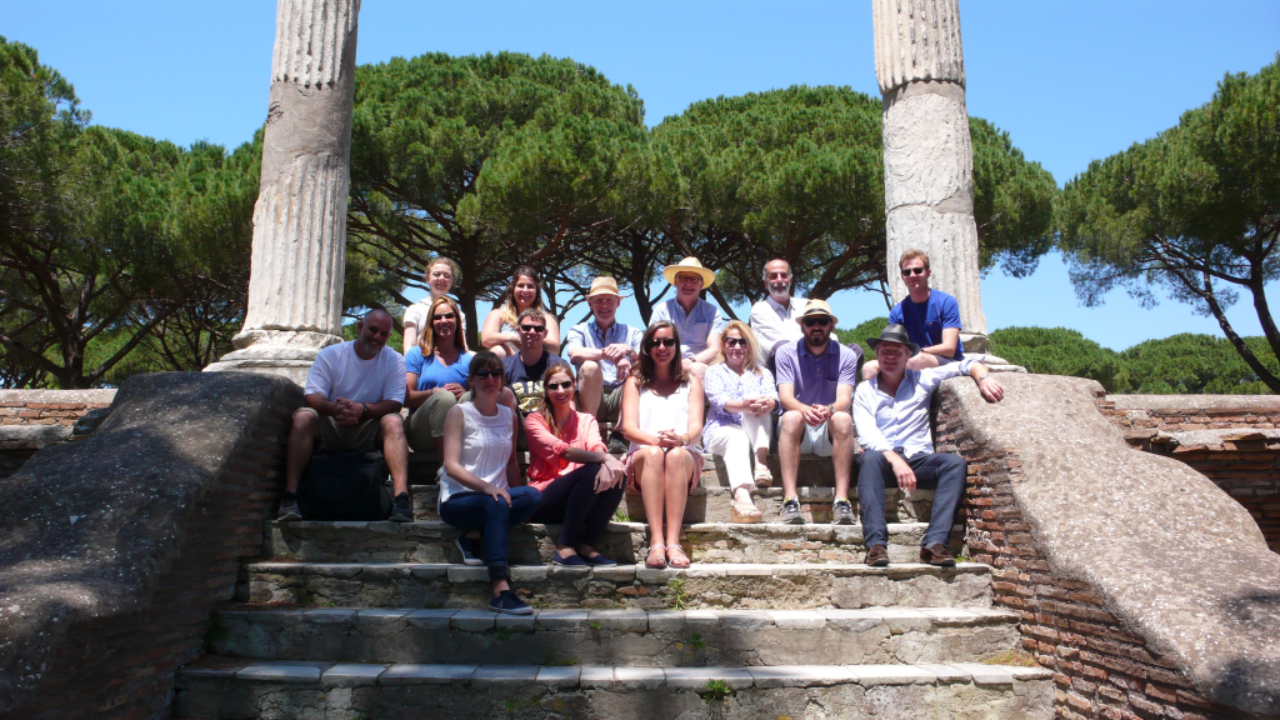 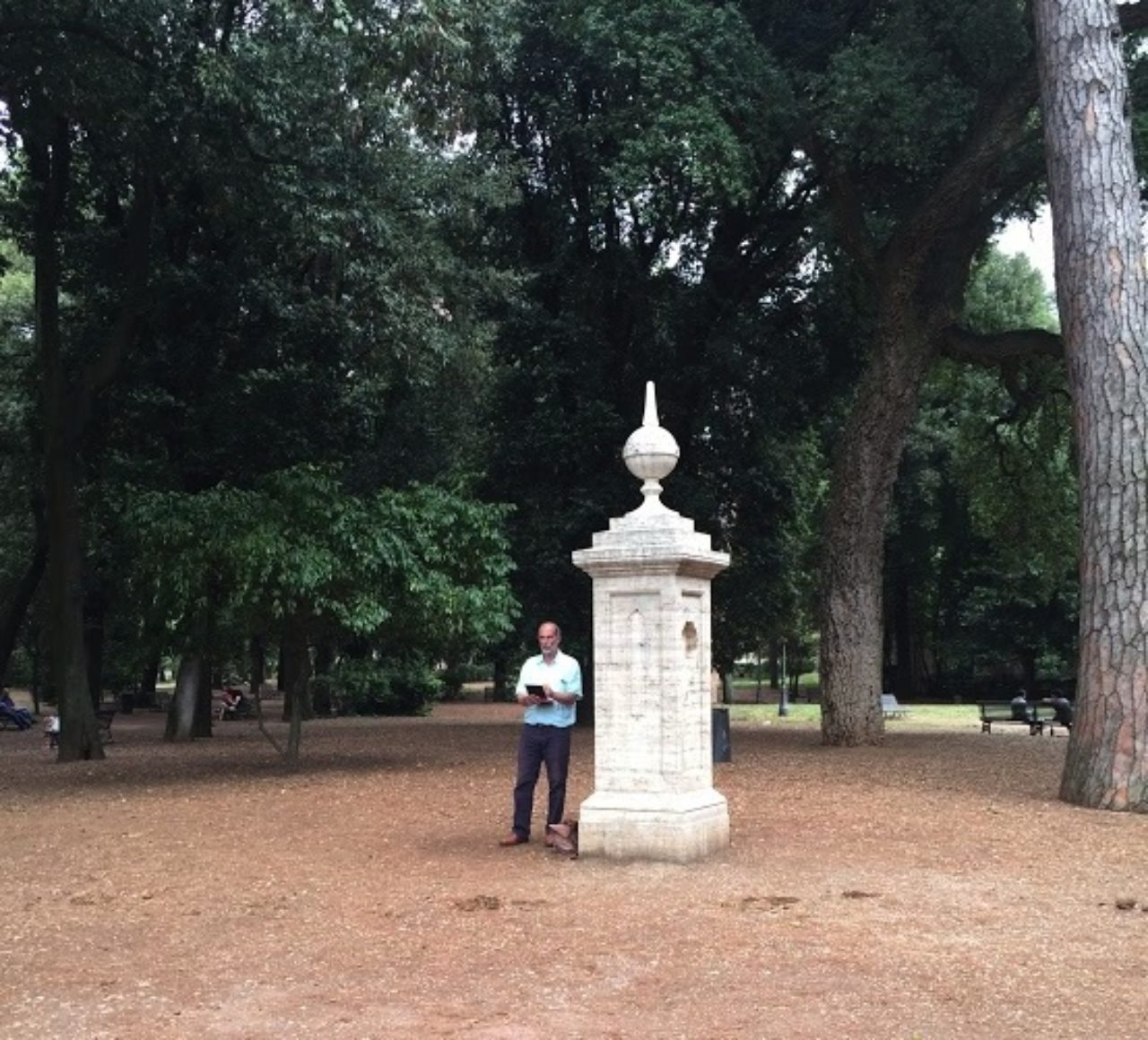 June 10th, by Fay Edwards: After a busy day spent negotiating rainy weather and public transport, Friday was a lovely change of pace. We began by walking towards Villa Borghese through the Piazza di Spagna and along Via del Babuino. Today’s lecturer, Selena Anders, helped set the scene by taking us by the old urban residence of the Borghese family. Big enough to constitute an urban block, the building is now home to various international agencies. 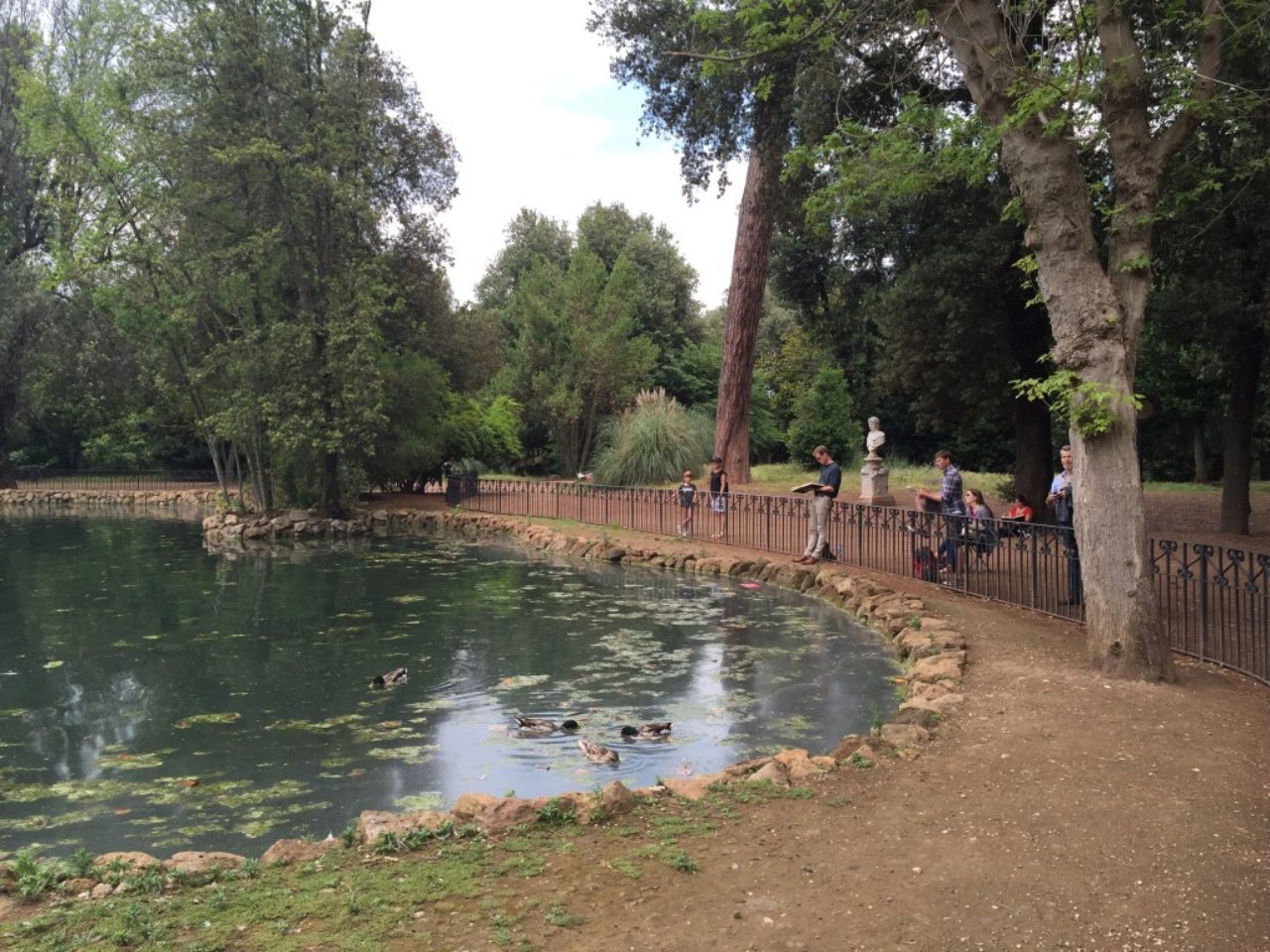 Before ascending the hill to the Villa Borghese, Selena gave us a brief history of Piazza del Popolo. The Piazza del Popolo, or people's square, was redesigned in the neoclassical style by architect Guiseppe Valadier between 1811 and 1822. This Piazza is significant not only for its design, but also for its location. It is the starting point of the Via Flaminia, a road of ancient Roman origin that leads to Northern Europe, and the hinge by which three import roads intersect - Via del Babuino, Via del Corso, and Via di Ripetta. 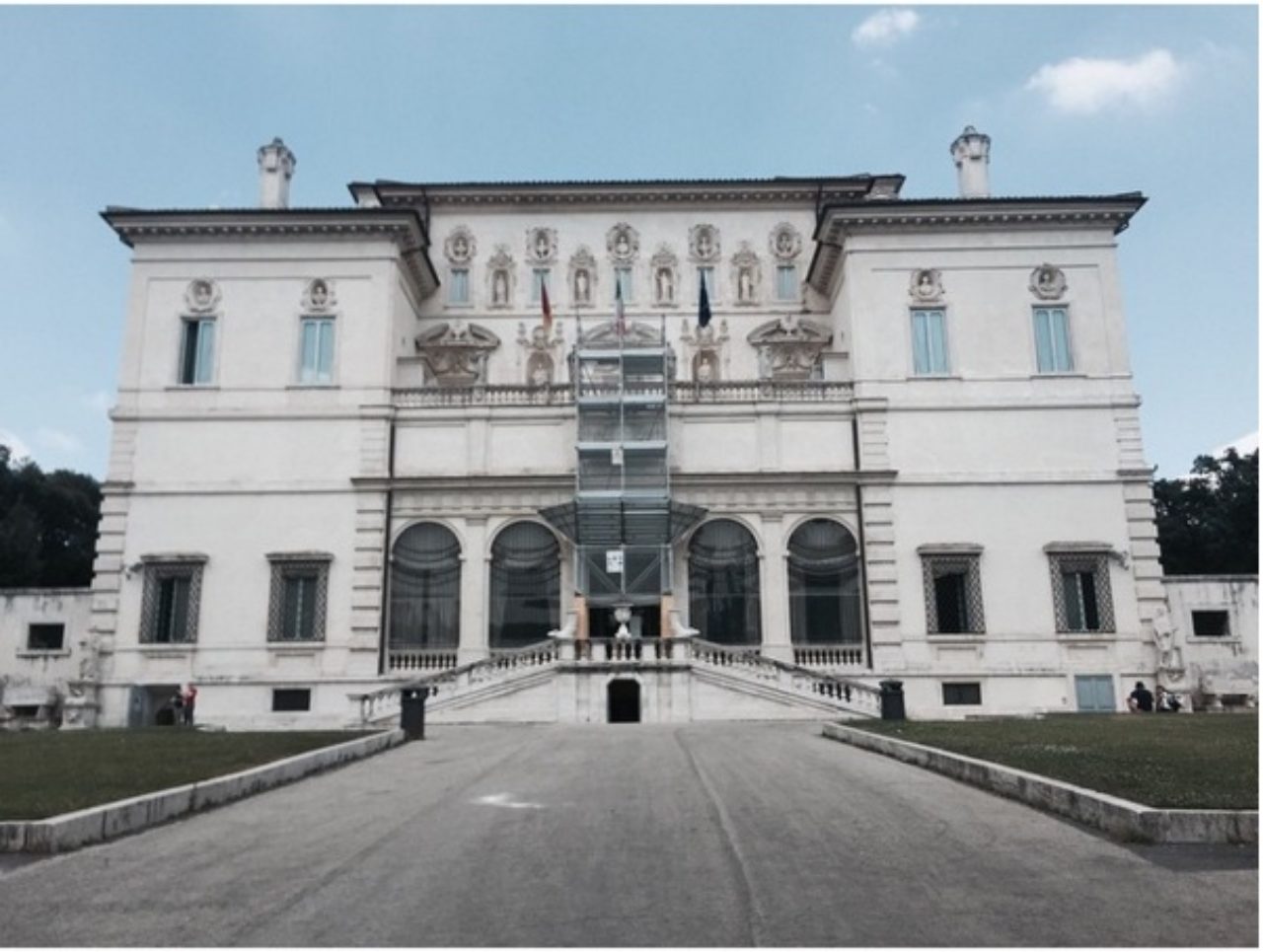 Leaving this urban space behind, we climbed up to Villa Borghese and made our way through the beautiful park towards Galleria Borghese. As the clouds played tricks with the facade of the building, we sketched and painted as many of the buildings details as we could before breaking for a delicious lunch hosted by the ICAA. 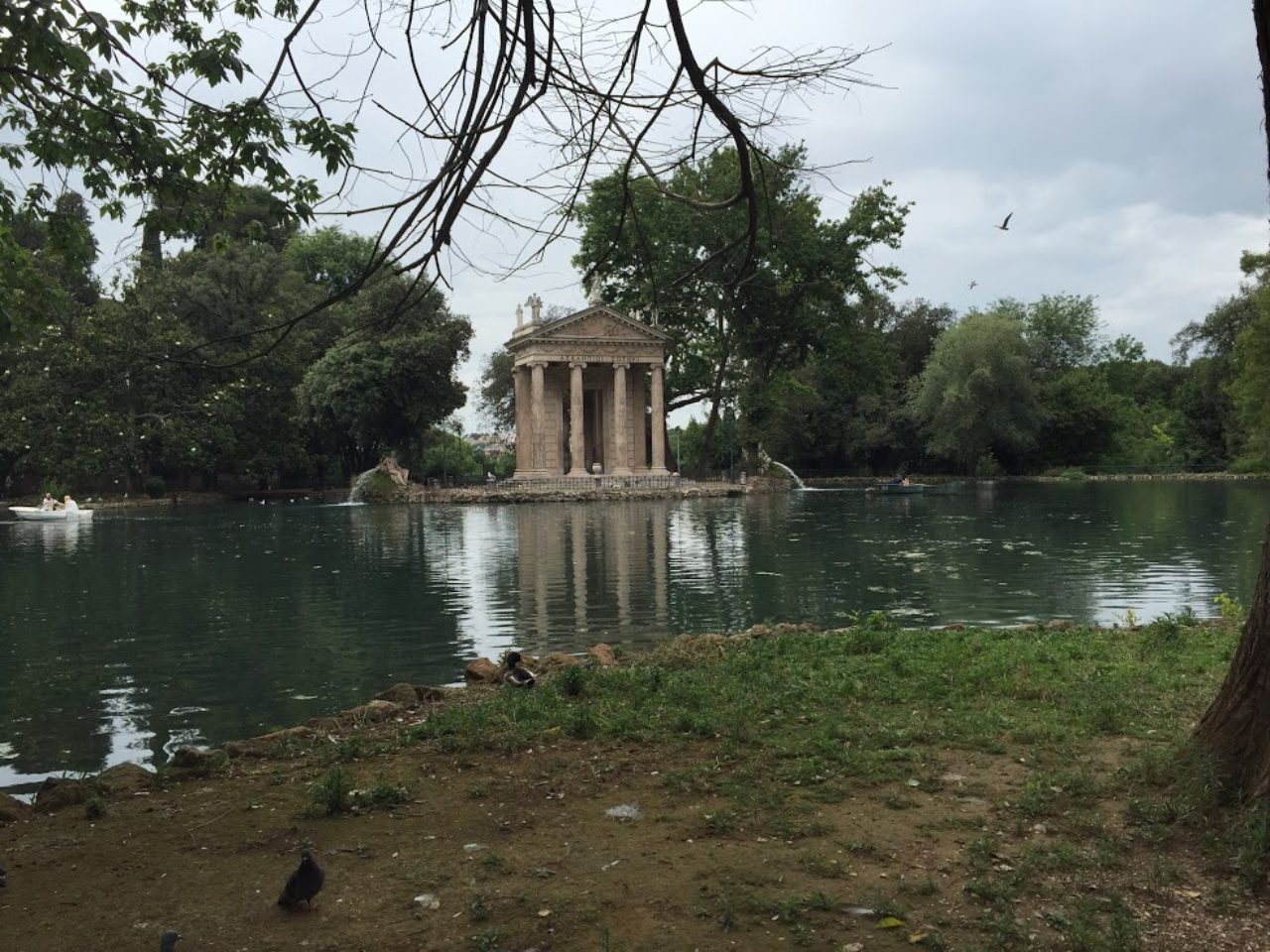 The Temple of Aesculapius

Following lunch, we made our way to the Temple of Aesculapius. Set behind a lake, this scene challenged us to consider how to capture water and reflections in our sketches and paintings. To conclude the day, Alexander Creswell led us to the lookout 'Passeggiata del Pincio' for an incredible vista of Rome as the sun started to set. We spent the rest of the afternoon trying to draw out the most important details from this very complex scene...to varying degrees of success! 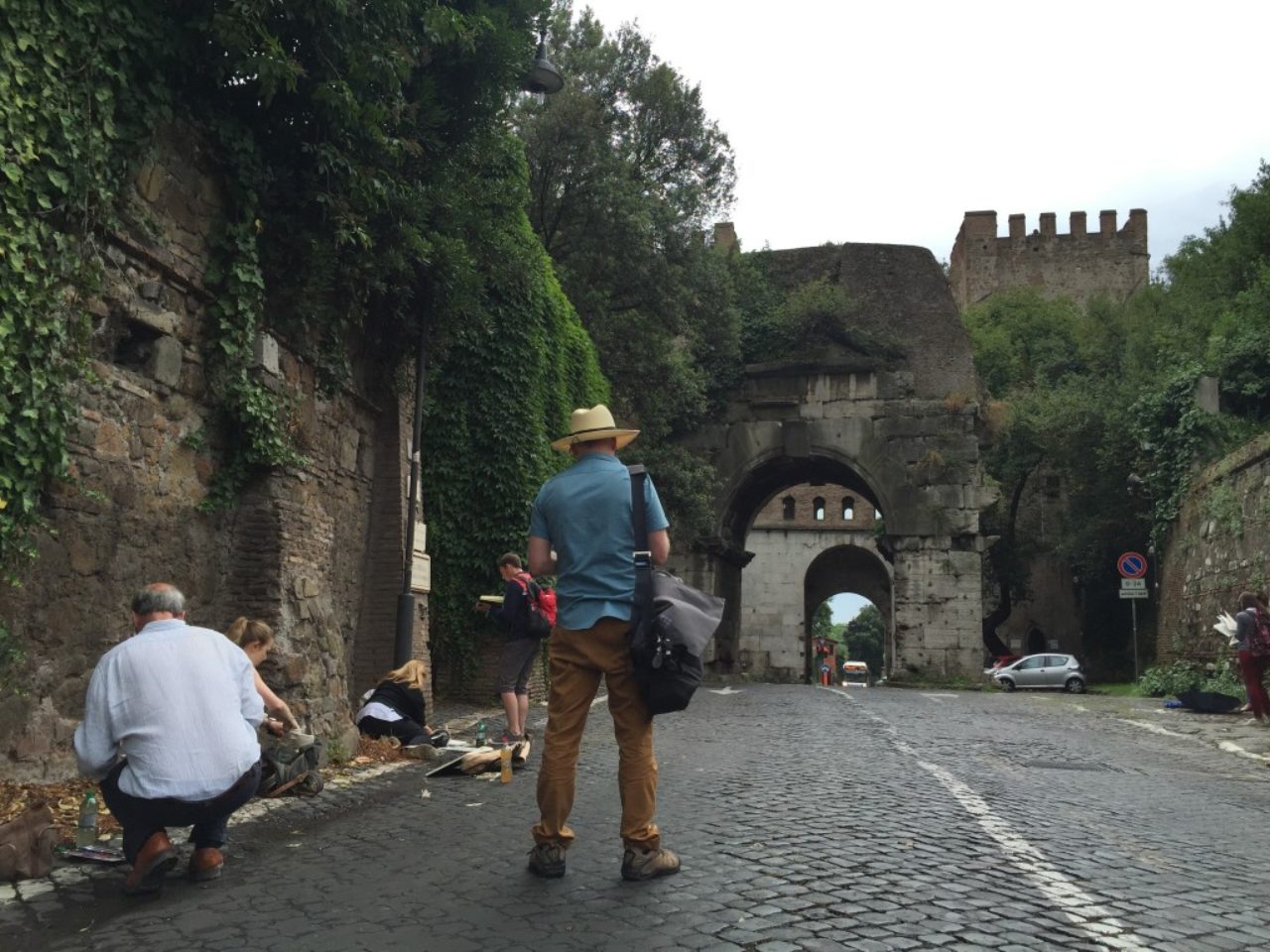 June 9th, by Raphaela Papaléo Farias: The group visited the area of the Appia Antica, one of the limits of the ancient walls of Rome, as well as the Museo delle Mura, located beyond the “Porta S. Sebastiano” of the Aurelian Walls. We enjoyed learning about the depths formed by the arch lines, which contour the museum's design. We studied the proportions of the depth in large-scale and the lights and shadows offered by the site. We made a quick, but accurate, sketch of the Arch of Drusus, which is an old arch from the Antoninianus aqueduct, located in front of the Museum. 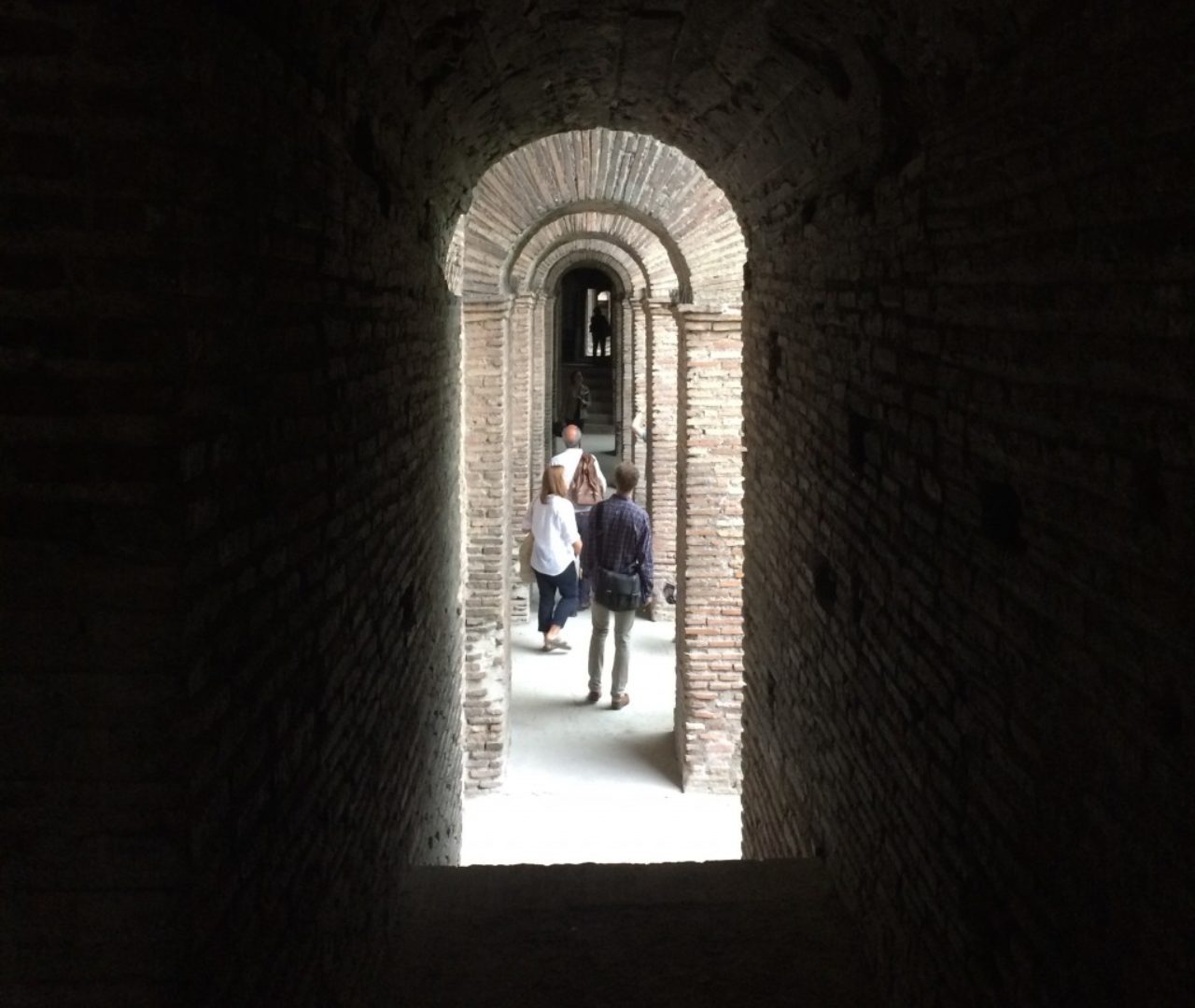 Students walk beneath the arches of the Aurelian Walls

Finally, we settled in front of the Mausoleum of Cecilia Metella, built in the time of Augustus, where we could contemplate the natural landscape in relation to the architecture. The shading technique we used with graphite and watercolor made it a challenge to achieve a balanced representation of the design and the landscape on a sheet of paper. 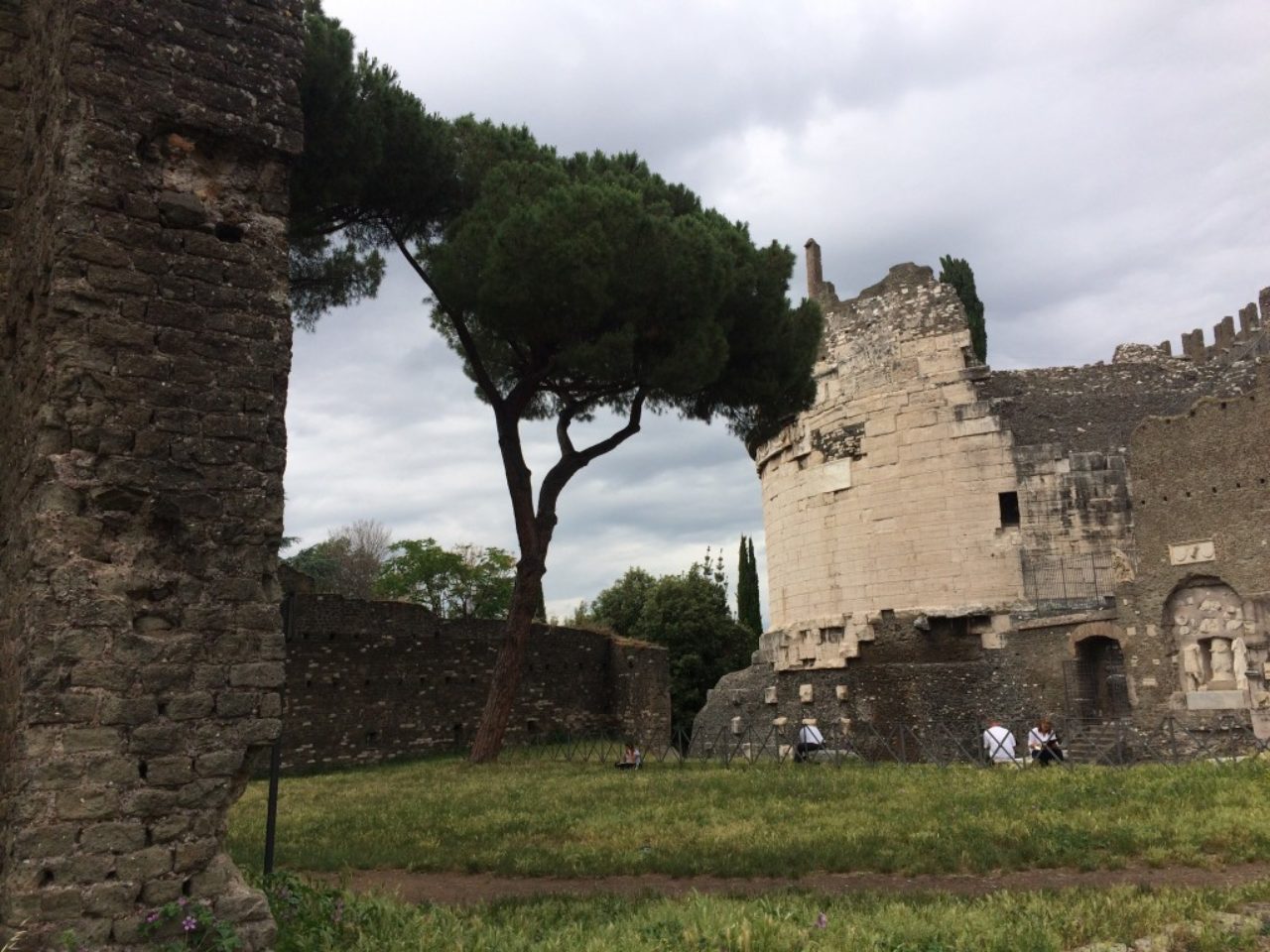 The Mausoleum of Cecilia Metella 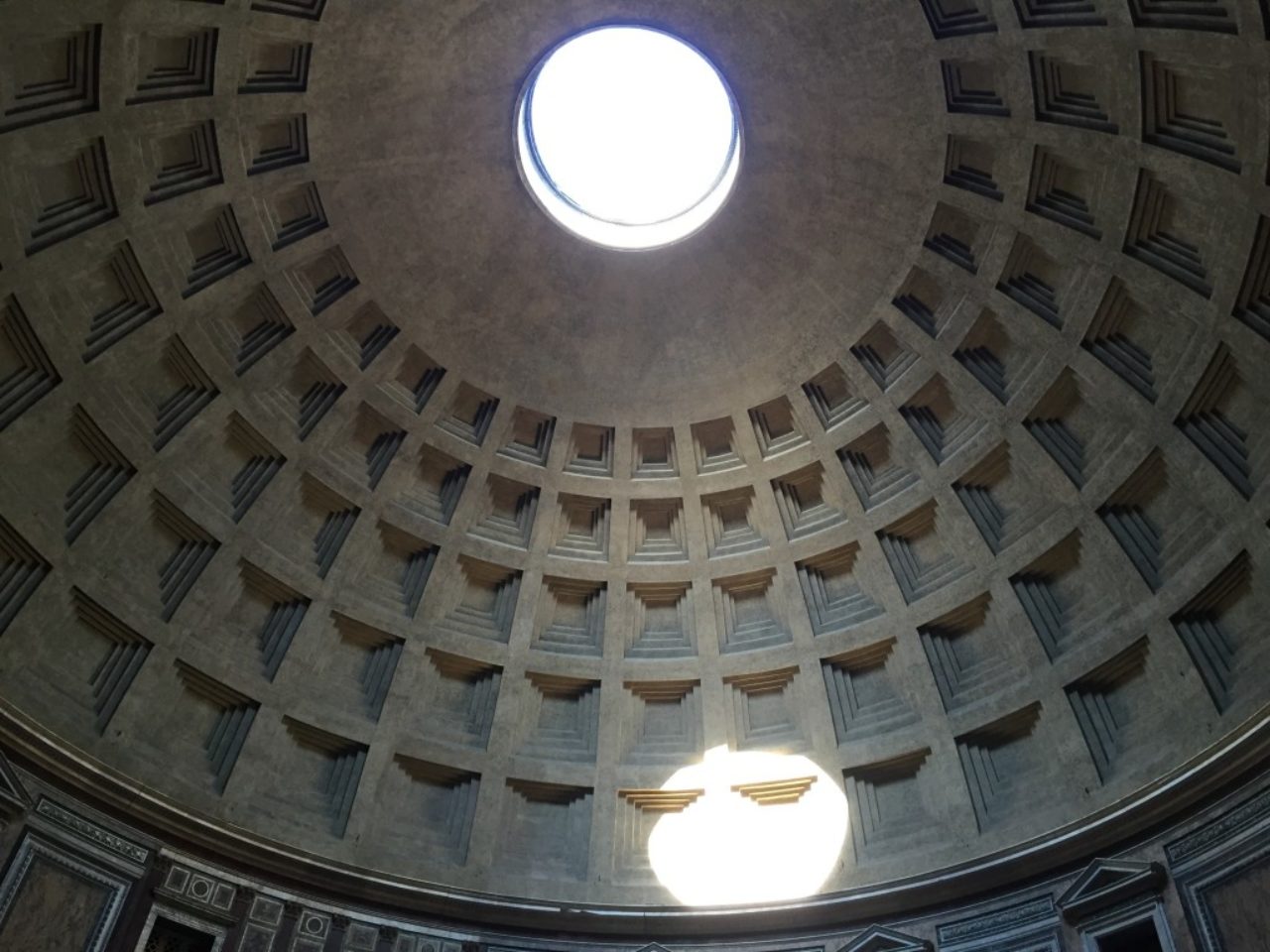 June 8th, by Fay Edwards: As the memory of the ancient city of Ostia Antica settled like the dust on it's cobblestone roads, we found ourselves under the huge dome of the Pantheon. Looking up into this vast space, Alexander Creswell, our watercolor instructor, encouraged us to imagine the body of air and light that it encompassed. Rather than methodically drawing in each detail, Alex drew our attention to the shadows that played amongst them. From a quick sketch we moved to a simple watercolor that attempted to highlight the space between the physical details. 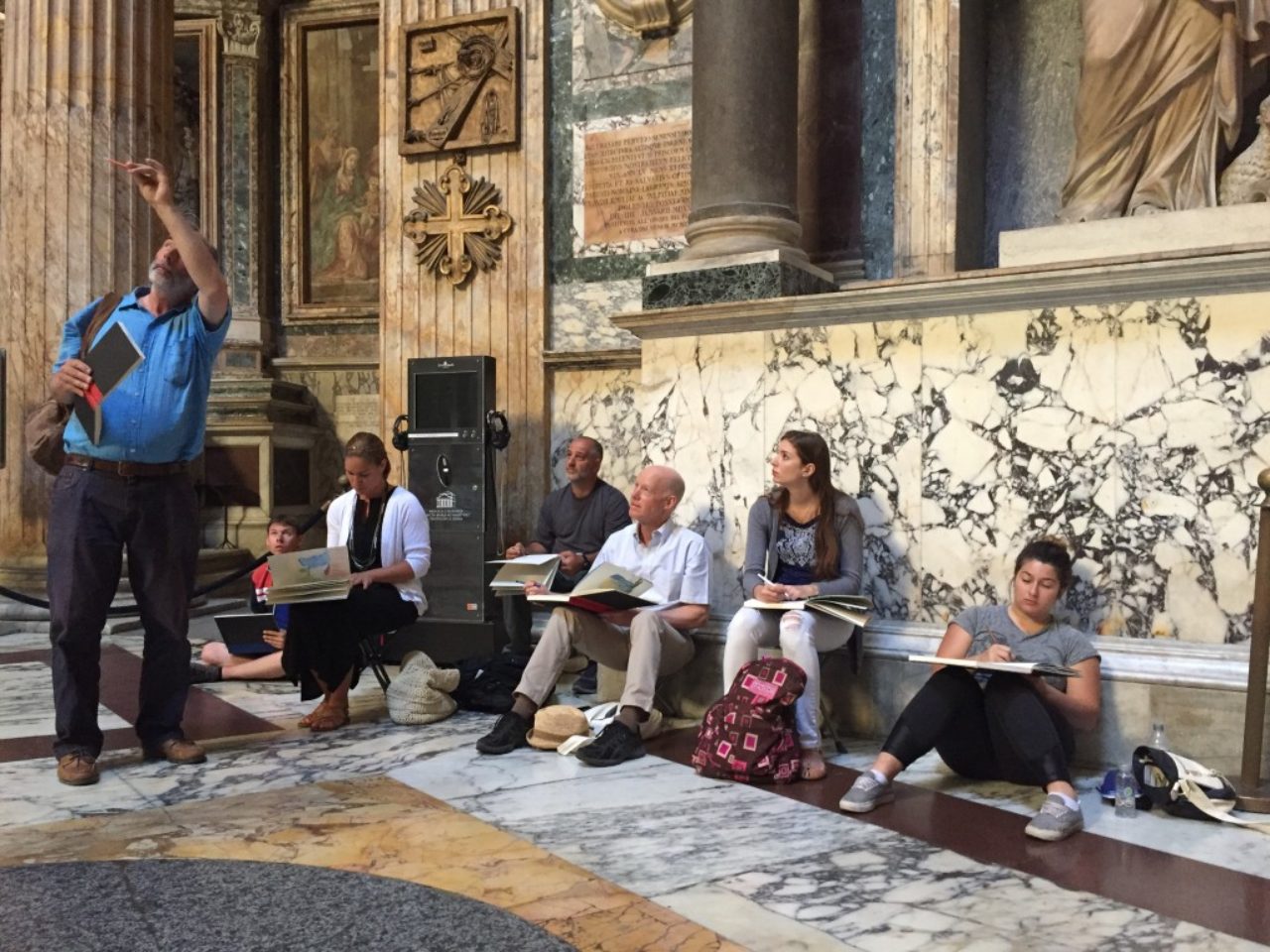 A quick sketch of Bernini's Elephant and Obelisk, more affectionately called the Little Elephant or il pulcin in Italian, at Piazza della Minerva was a light-hearted break, which allowed us to draw and paint the curves and quirks of this comical figure. Again, the objective of the study was to show the way light helped to define the shape of the subject.

A quick walk through the Roman ghetto, formerly an enclosure for Rome’s Jewish population, led us to a collection of temples in the Forum Boarium. The Forum Boarium is home to the oldest surviving marble temple in Rome, the Temple of Hercules.  As the light of the day gently faded, we all found a little spot to apply the lessons of the day to these impressive monuments. 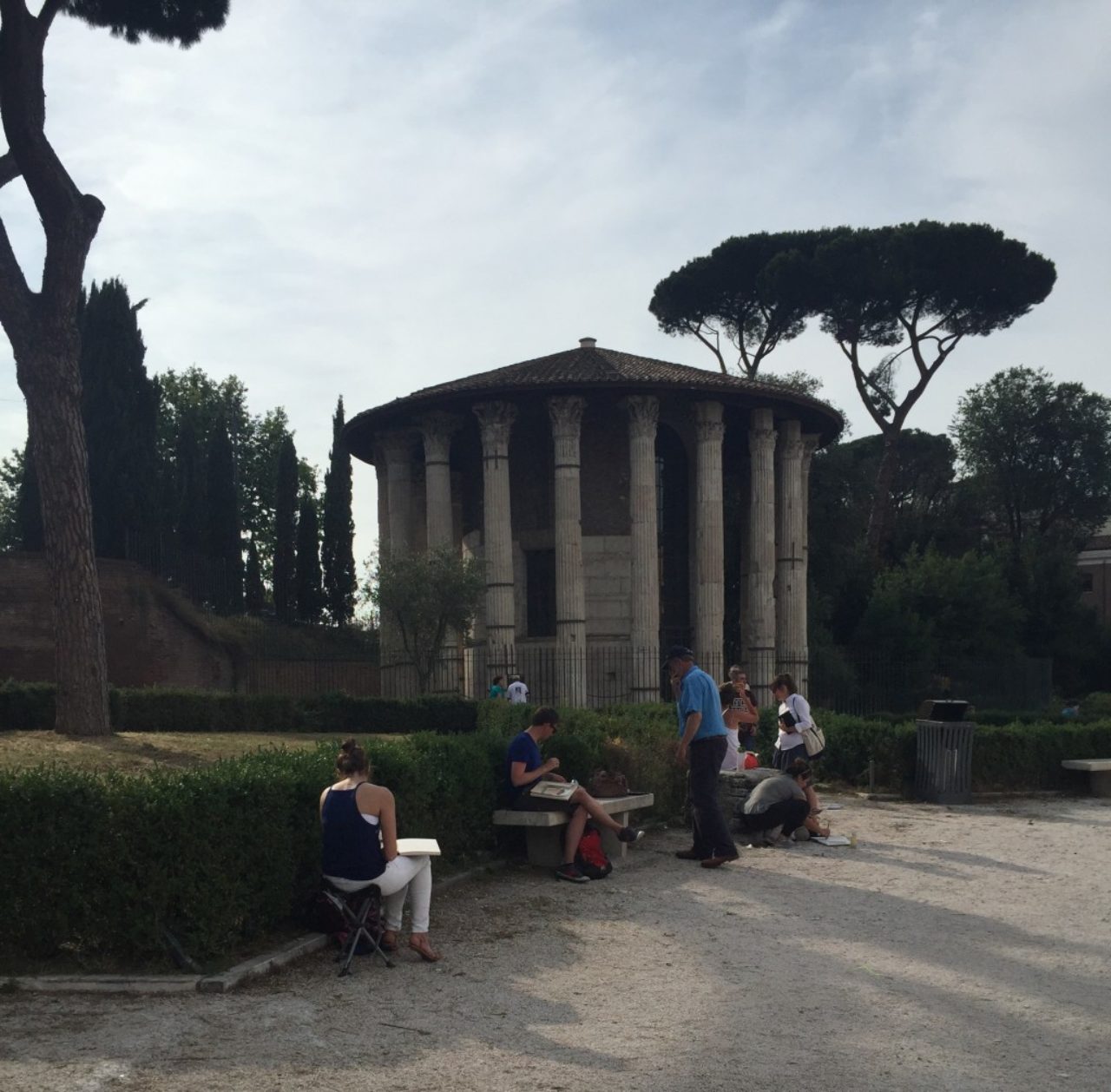 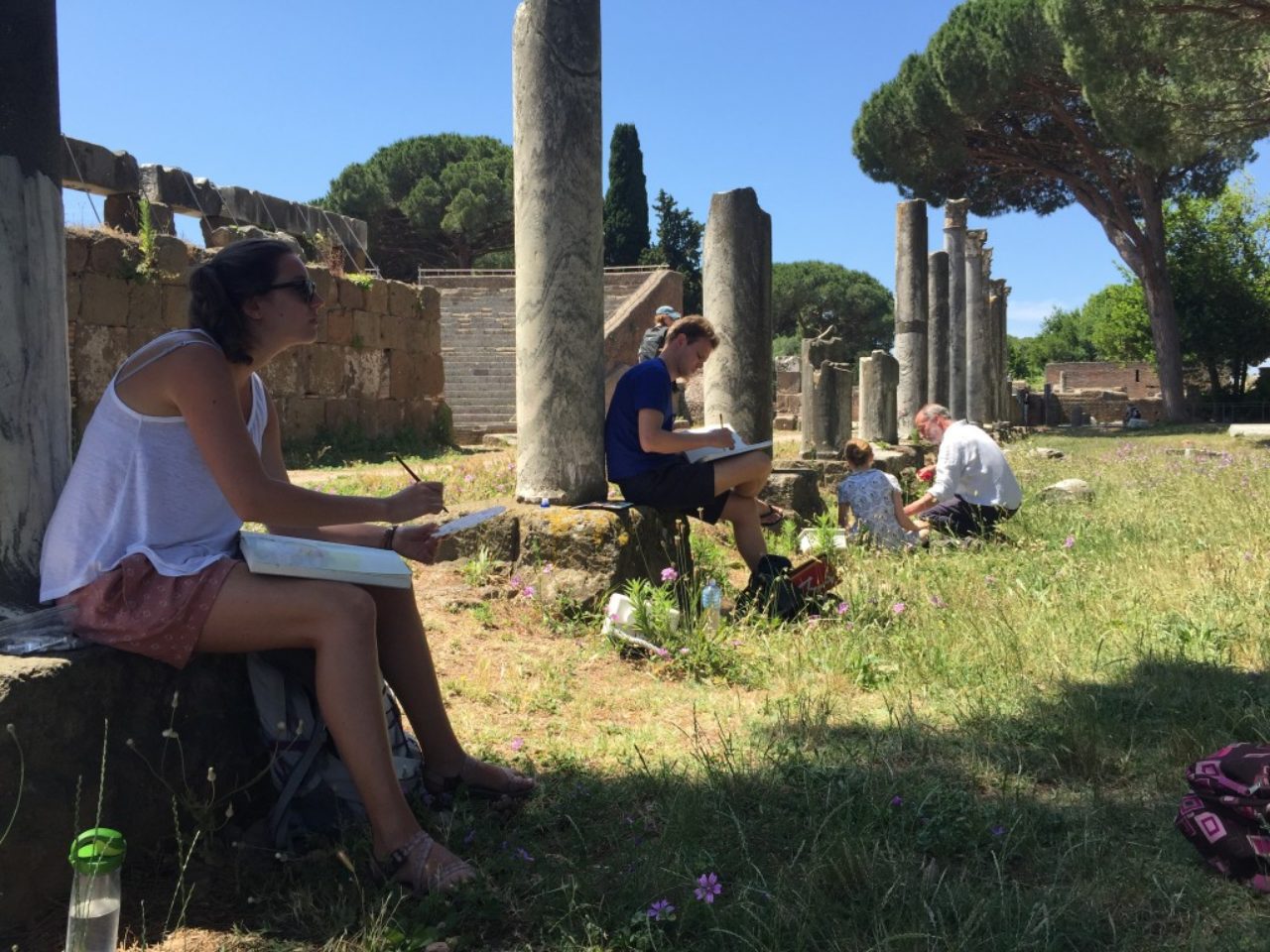 June 7th, by Winston Grant-Preece: Today was all about ancient Roman civilization and, in particular, a Roman settlement called Ostia Antica. Ostia Antica, which served as a harbor city for ancient Rome, features extremely well-established residential structures: the periodic flooding of the River Tiber deposited silt on the city, helping to preserve it. 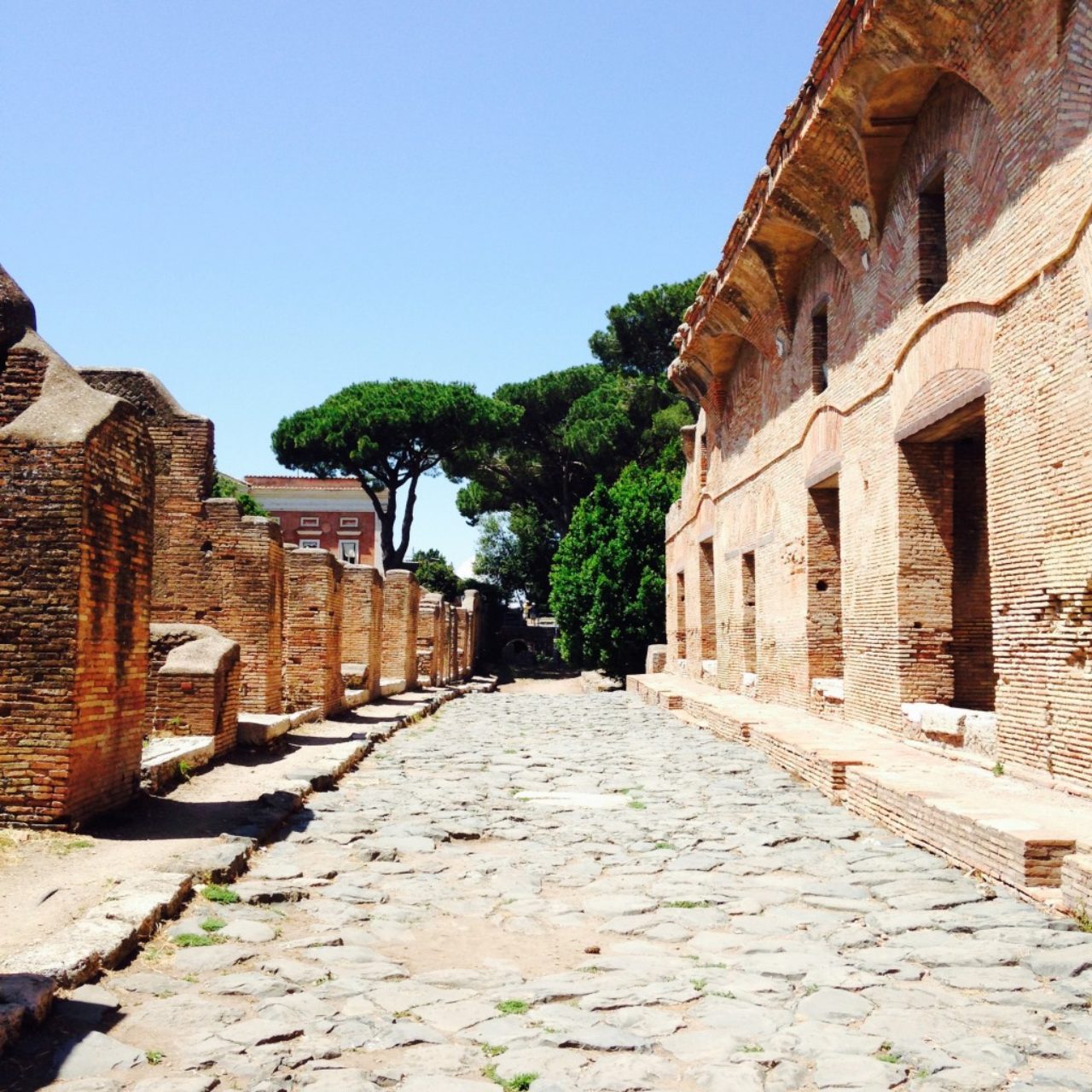 The city itself contains extraordinary mosaics and impressive Roman structures which, because of their relatively good condition, show us just how urbane the Romans were. The Romans were able to create this dense urban area by consolidating residential and retail functions and creating a complex of insulae, buildings often comprised of retail space on the ground floor and apartments above. 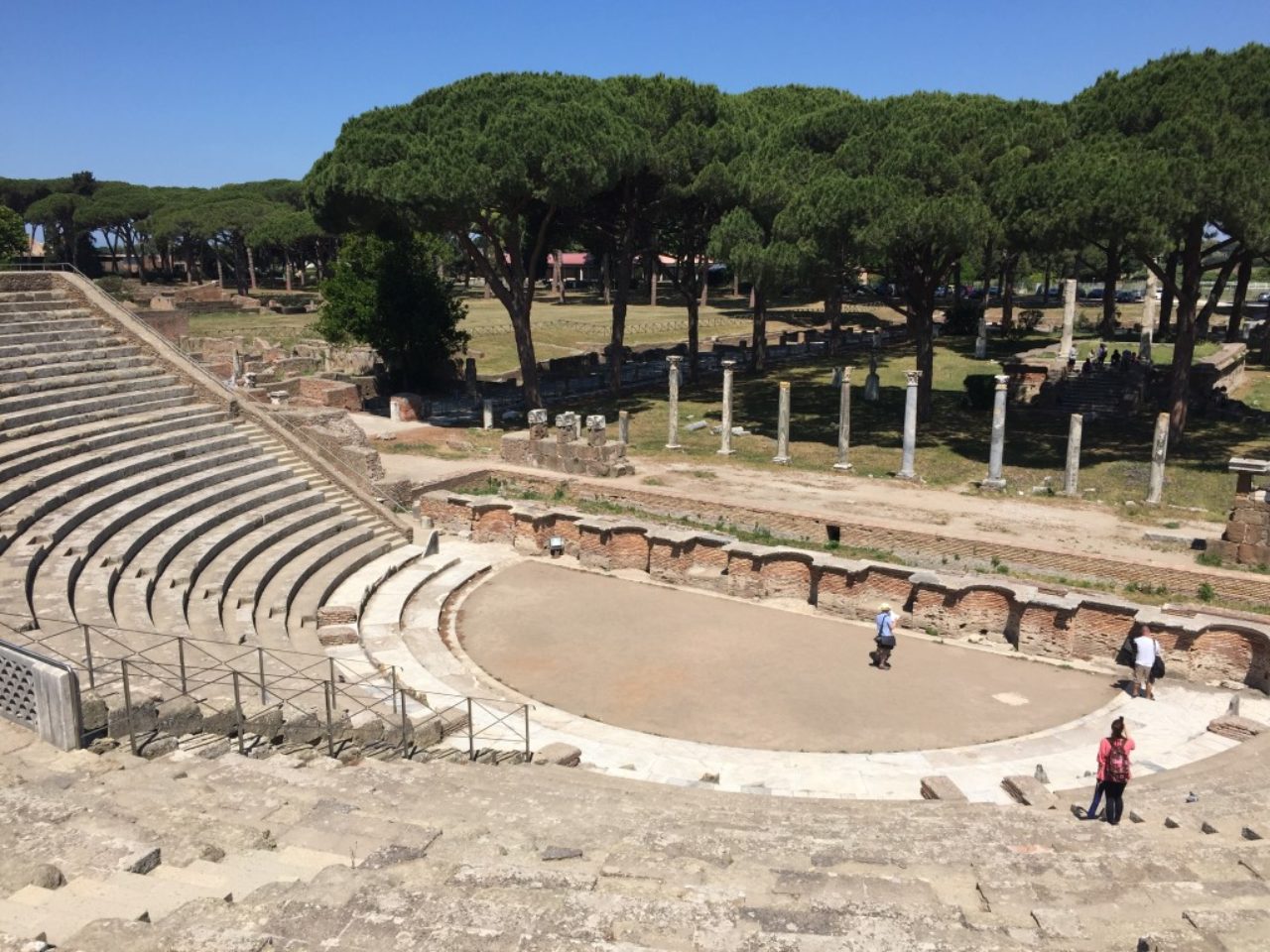 Inside the ancient theatre of Ostia Antica

Under the guidance of Alexander Creswell and Ben Bolgar, we produced a set of three watercolor drawings of Ostia Antica. We began by painting a ruined temple, then moved on to paint a street scene, and finally rendered more detailed views of the ruins. The goal with these watercolors was to focus on light and shadow and the warm reds and browns of the ancient stonework. While this exercise proved challenging due to the rustic, broken, and fragmented nature of the ruins, it was ultimately a truly valuable experience. 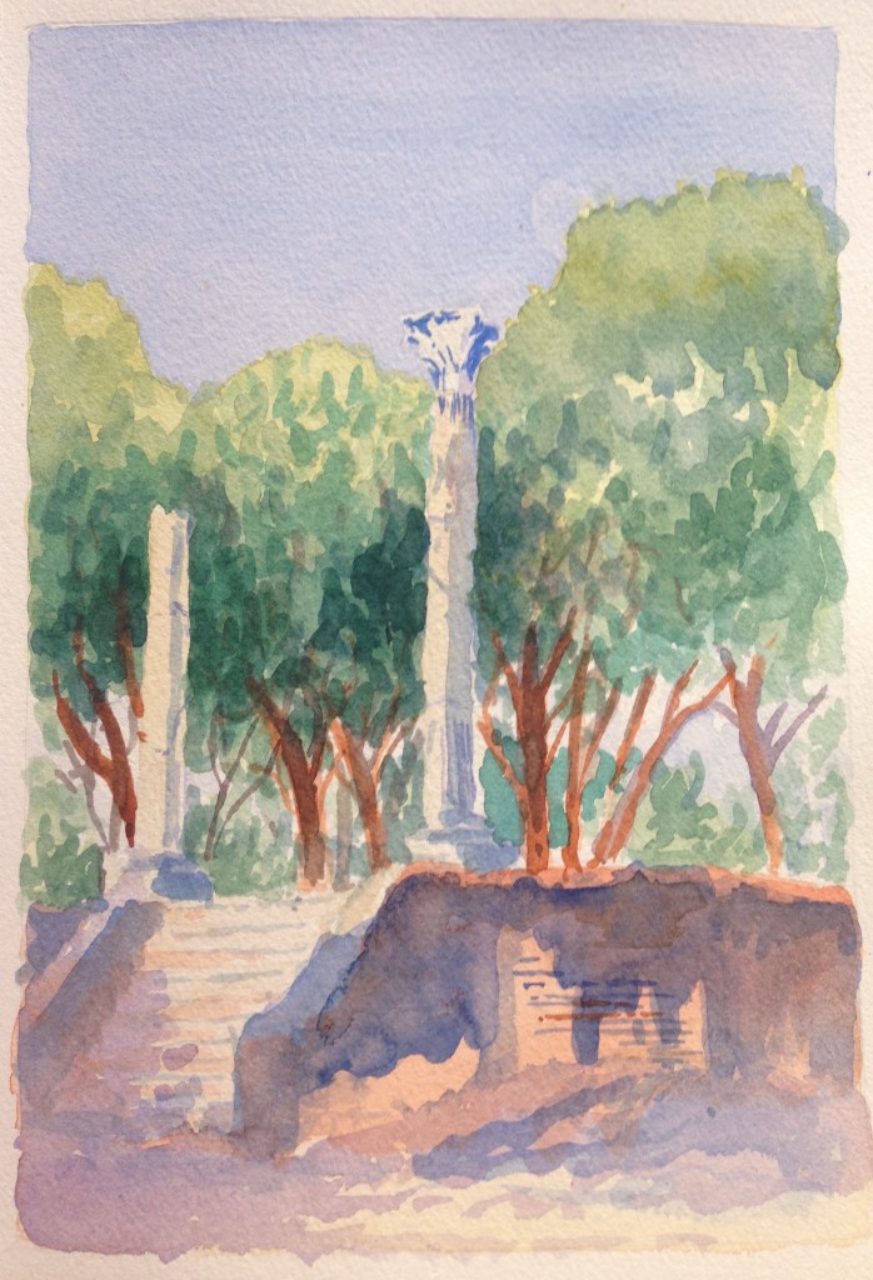 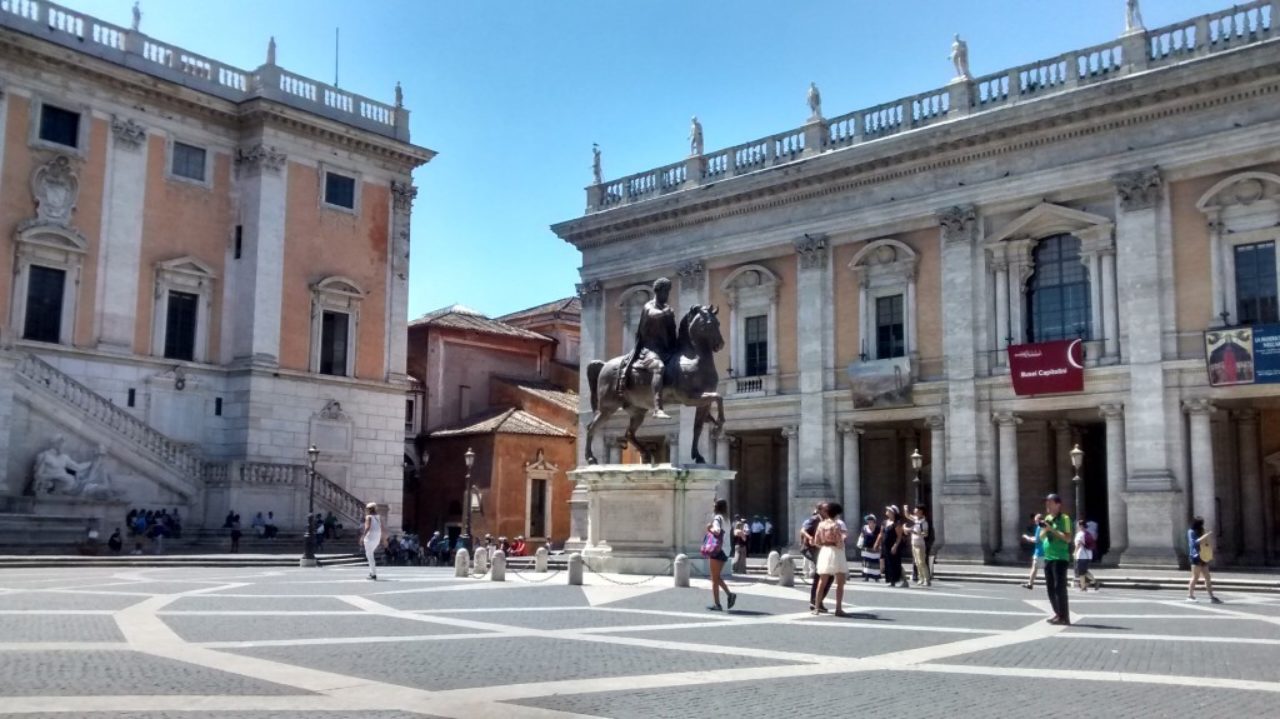 June 6th, by Rebecca Levitan: After a weekend of sketching in pencil, the group had its first introduction to watercolor on Monday with Alexander Creswell. The adjustment was a welcome one for those eager to begin painting. 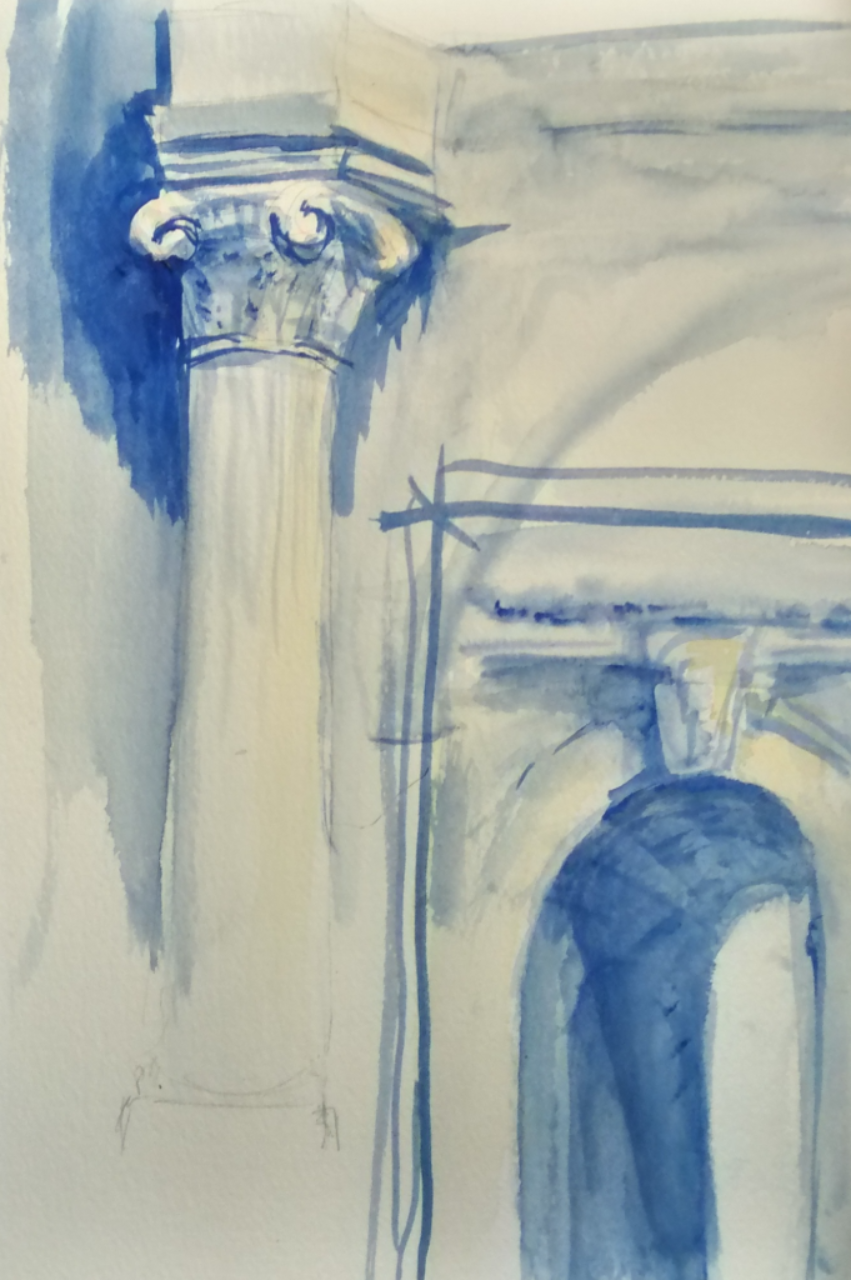 The day began with a stroll to the Piazza del Campidoglio, on one of Rome’s famous seven hills and the location of a complex of buildings and sculpture designed by Michelangelo near the end of his career. Ben Bolgar and Selena Anders walked the group through the important aspects of the Piazza’s mythological and Renaissance history. The irregular shape of the piazza, and the monumental equestrian sculpture of Marcus Aurelius provided welcome challenges for the artists.

After a lunch break in the historic area of Monti, the group headed below modern street level into the Roman Forum. Braving intense sun, Selena led the group through some of the Forum’s most famous monuments. The group then settled near the triumphal Arch of Septimius Severus. Built in the early third century AD, the tripartite arch was erected by the Roman emperor Septimius Severus to celebrate his military victories over the Parthians, an event memorialized in some of the sculpture that adorns the monument.

The arch is a favorite subject for watercolor artist Alexander Creswell and was thus a fitting place for him to introduce the group to some of his techniques, such as the representation of shadow, as well as direct and reflected light. The group began by attempting single or two-tone watercolor sketches of aspects of the monument. Some moved on to more elaborate watercolors in other parts of the Forum. 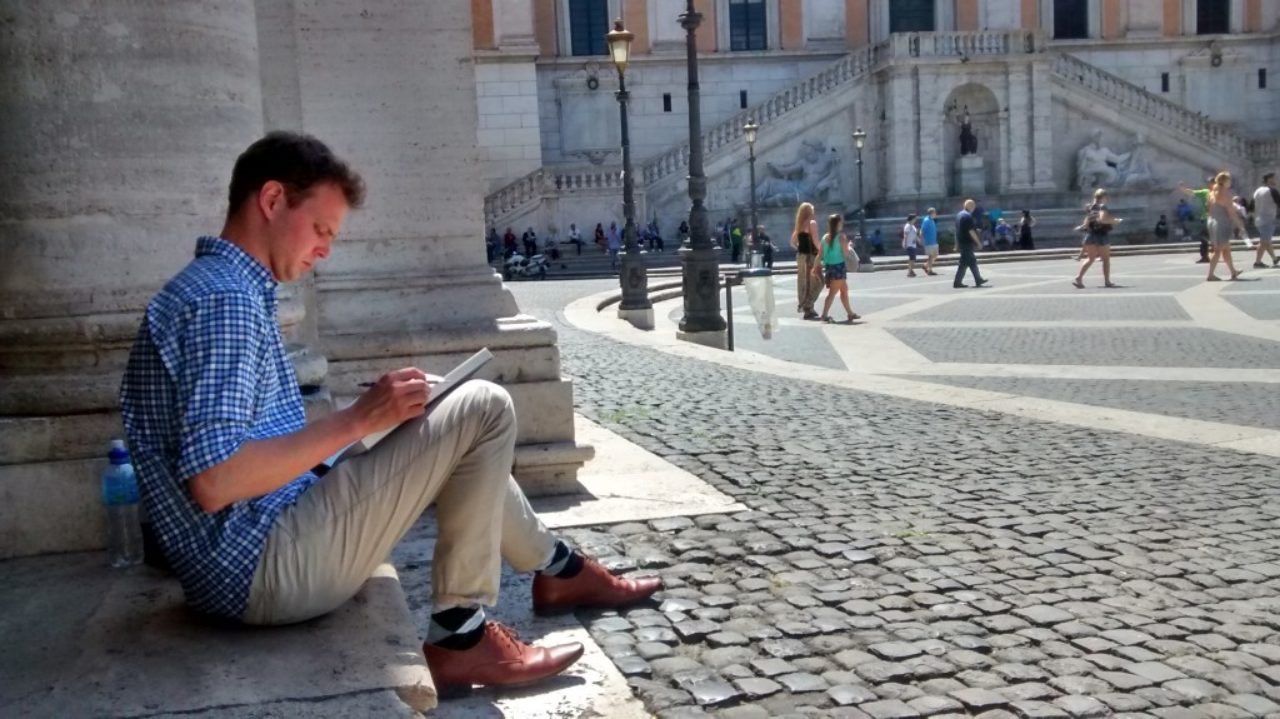 A student sketching in the Piazza del Campidoglio

To end the day, the group reconvened at the Hotel Santa Chiara for a presentation by Alexander Creswell about his own process and some of his series of massive watercolors, which include Italian landscapes, as well as documentary watercolors of interiors, and even capriccios (fanciful hybrids) of several sites or modifications of world landmarks. It was a fascinating end to the introduction to watercolor, which illustrated how far the medium can be pushed, both in scale and technical achievement. 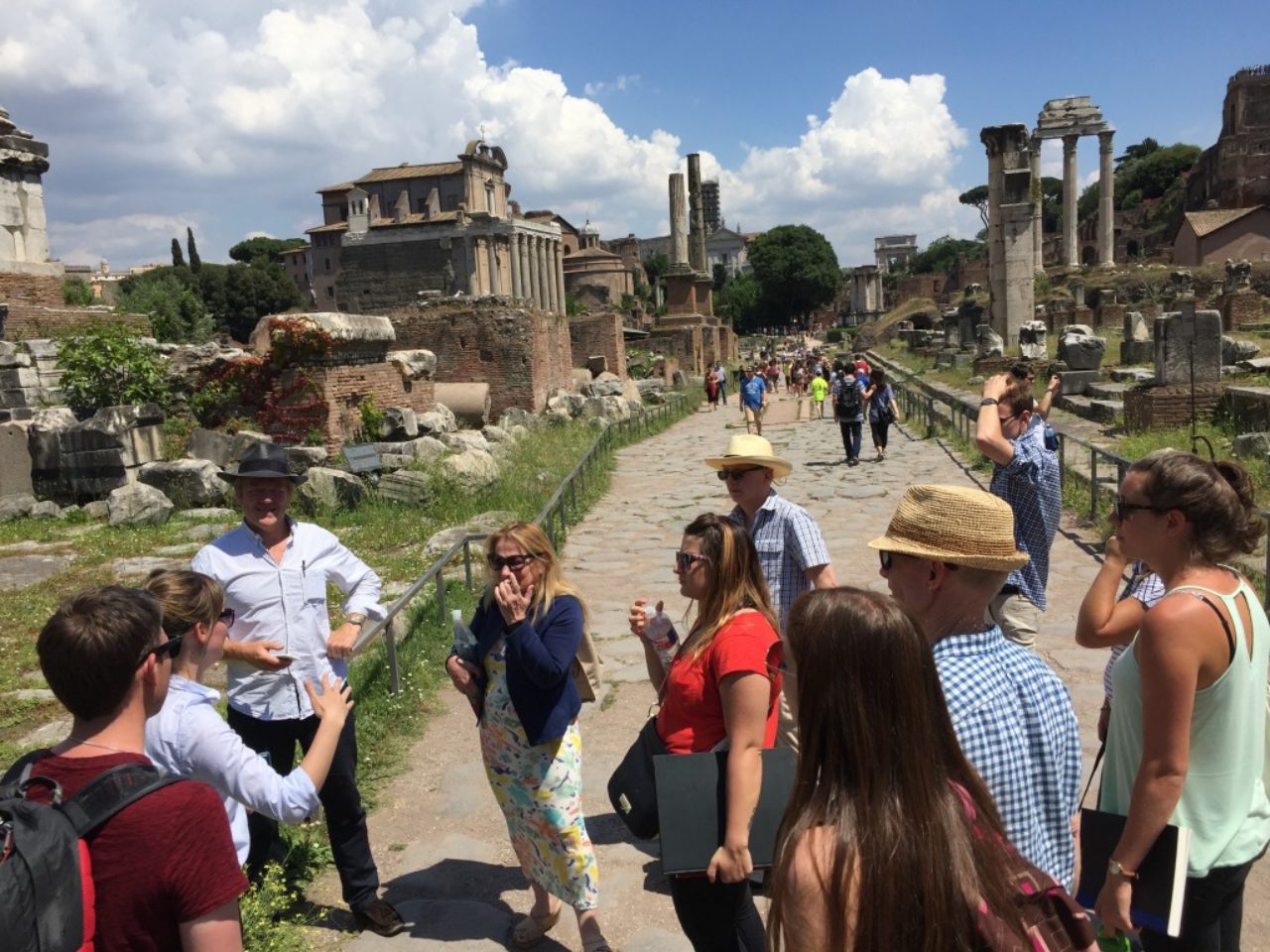 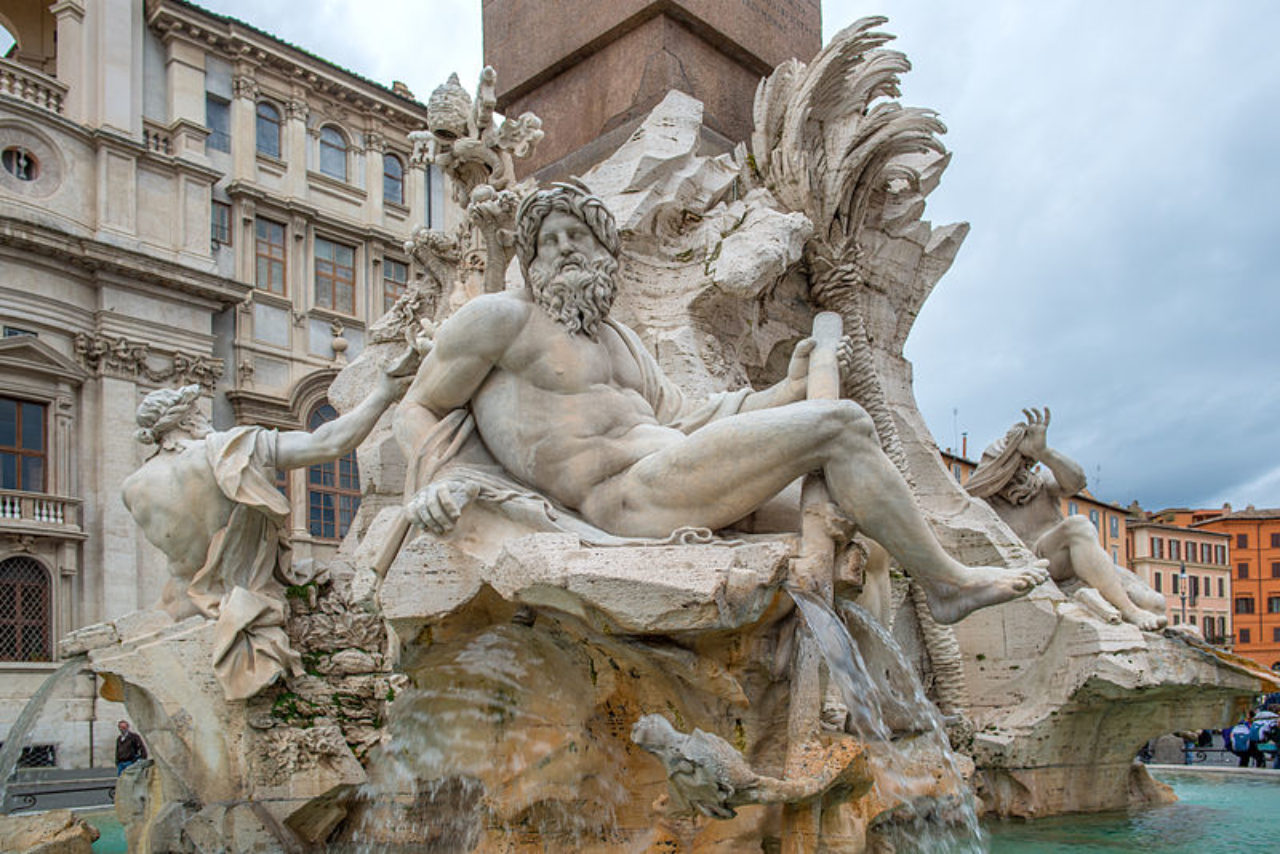 June 5th, by Eric Stalhiem: The first full day of the ICAA’s 2016 Rome Drawing Tour began at 9:00 am at Piazza Navona, where we focused on Bernini’s Fountain of the Four Rivers. Each participant did a series of two to three 15 to 20 minute vignettes focused on a specific figure within the fountain sculpture. Beginning with the figure of the Nile – its head shrouded and adjacent a palm tree – I then moved on to the Tiber, then the Ganges, and finally, the Danube River. 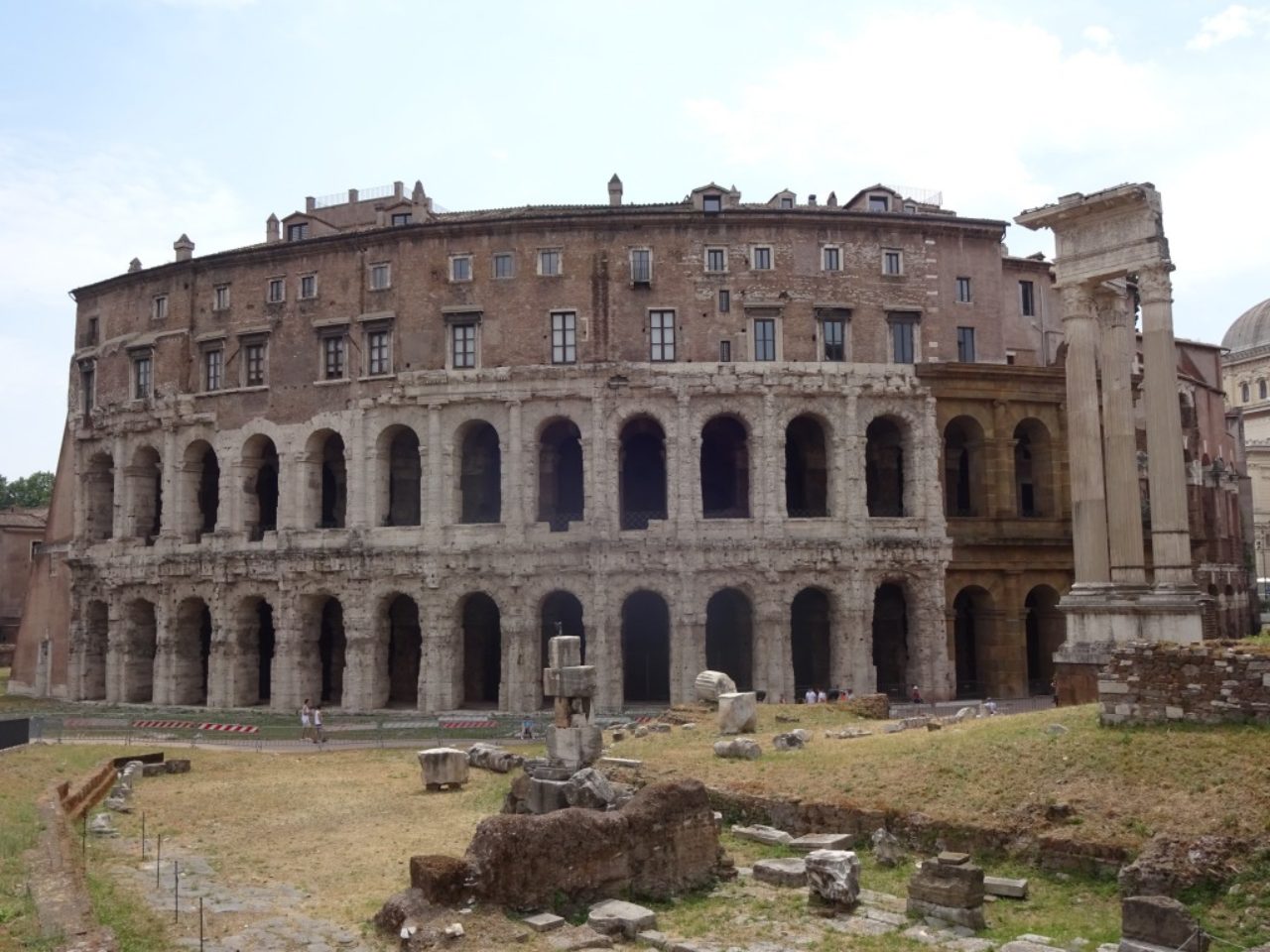 After drawing for two hours, we adjourned for a lunch break and reconvened at Santa Maria della Pace. Here, we focused on one-point perspectives in the Bramante cloister attached to the church of Santa Maria della Pace. We culminated the first day at the Theater of Marcellus complex, where we were given the freedom to draw the structure in as many drawings, forms, and presentations as we wished. I chose an architectural approach, representing the building in elevation, section and plan. 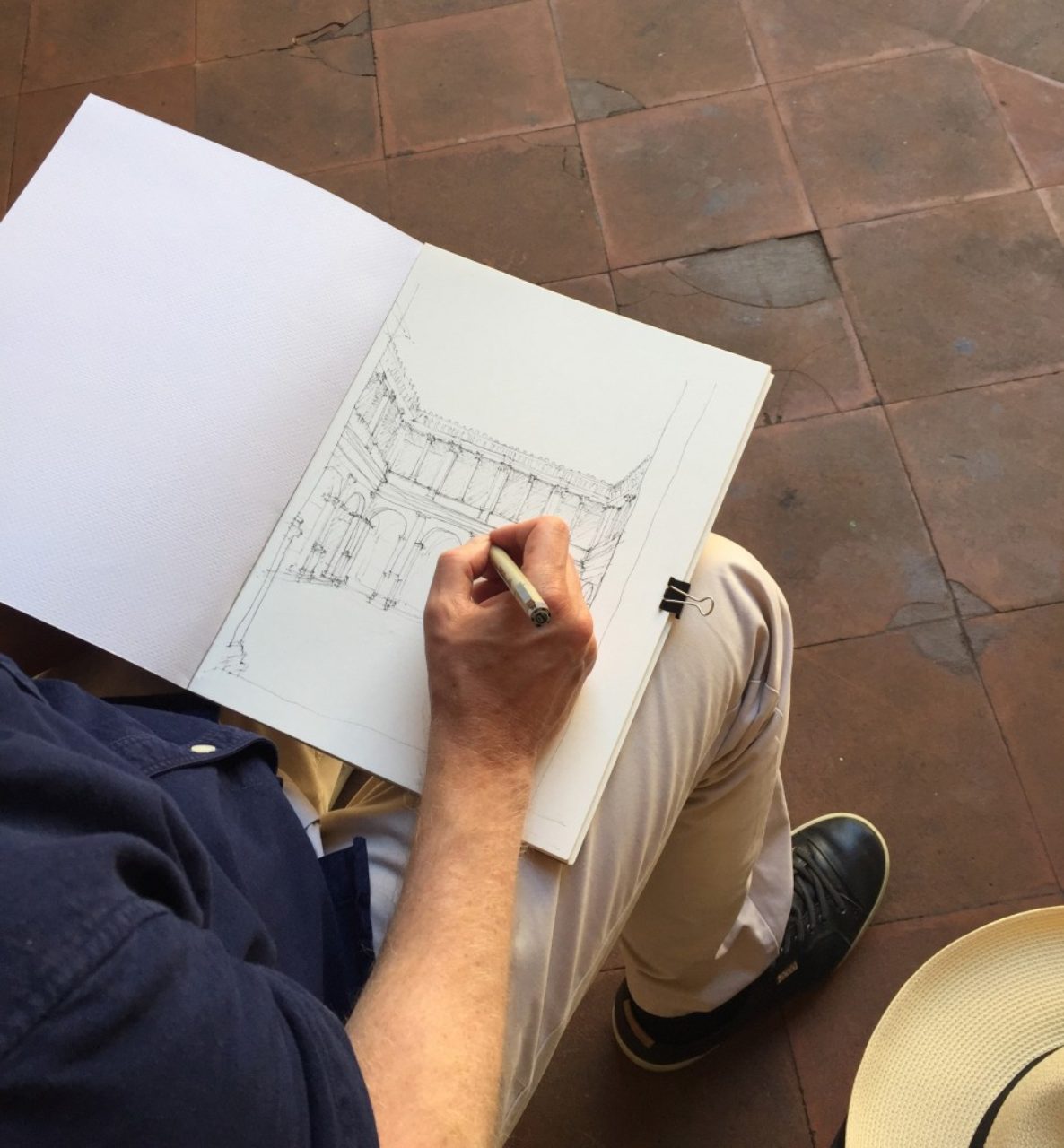 Student drawing the Cloister of Bramante