Each year, the ICAA National Office holds the Summer Studio in Classical Architecture, a four-week immersive program that introduces a cohort of university-level students to the core tenets of classical design. Students divide their time between the design studio and New York City itself, using the city as a 'living laboratory' for measured and analytical drawing; the relationship of the city's architecture to principles of urbanism; and more. Alongside these studies, students have the opportunity to meet emerging professional mentors and instructors, as well as visit classical design firms based in New York.

Follow along with the cohort of the 2022 Summer Studio, taking place from June 13th through July 9th, as students describe this year's experience in their own words.

You can read articles for other weeks of the program here: Week One | Week Two | Week Three

Following a longer weekend due to the Fourth of July holiday, the students returned to the studio with a focus on completing the design for their final projects. After two full days of work on the design and pencil renderings, the students took a brief break for an office visit to Ferguson & Shamamian Architects to learn more about how the firm operates and see examples of contemporary classical architecture projects.

The following morning, students were led by Michael Mesko, ICAA Chair of Education, on a guided tour of some of the collections at the Metropolitan Museum of Art. In addition to looking at the architecture of the Met Fifth Avenue building itself, the group studied examples of traditional architecture from around the world--including the Temple of Dendur, the Patti Cadby Birch Court (based on Moroccan late medieval design), the Astor Court (modeled on Ming Dynasty architecture of the seventeenth century), and more--to examine their connections with, as well as differences from, the precedents the group had looked at throughout the Summer Studio.

After the tour, the students returned to the studio to finalize their drawings and work on a new exercise: a rendered study of their final elevation, building from their introduction to architectural rendering in wash the previous week. The Summer Studio ended with a final breakfast and review of students' work by lead instructors from throughout the program.

"After three weeks of drawing the classical orders, observing and analyzing historical precedents, and studying the interconnected components of classical architecture, we put our new knowledge into practice," said Sarah Tyner, who just finished her senior year studying architecture at Georgia Tech. "During our concluding week of the Summer Studio, we finalized and executed drawings for a classical entrance-pavilion to Prospect Park.

Prior to completing these four weeks, I had limited experience studying classical architecture and no experience designing classically. The assignment to design a classical pavilion was an effective challenge which furthered our familiarity of the classical language. It required us to determine which precedents we enjoyed, and then use our American Vignola and ICAA Primer to draft our own designs.

Learning to design classically offered me a different education than I received during undergrad. It is a rational, methodological, and precise language. Each design decision typically has a prescribed implication, which I began to understand the more I worked through my own design on paper.

It was satisfying to piece together my design on paper and admire the end result. Taking the time to hand-draft deepened my appreciation for classical architects and their attention to detail, precision, and craft. Altogether, these four weeks influenced my strength as an observer, learner, and designer of the built environment." 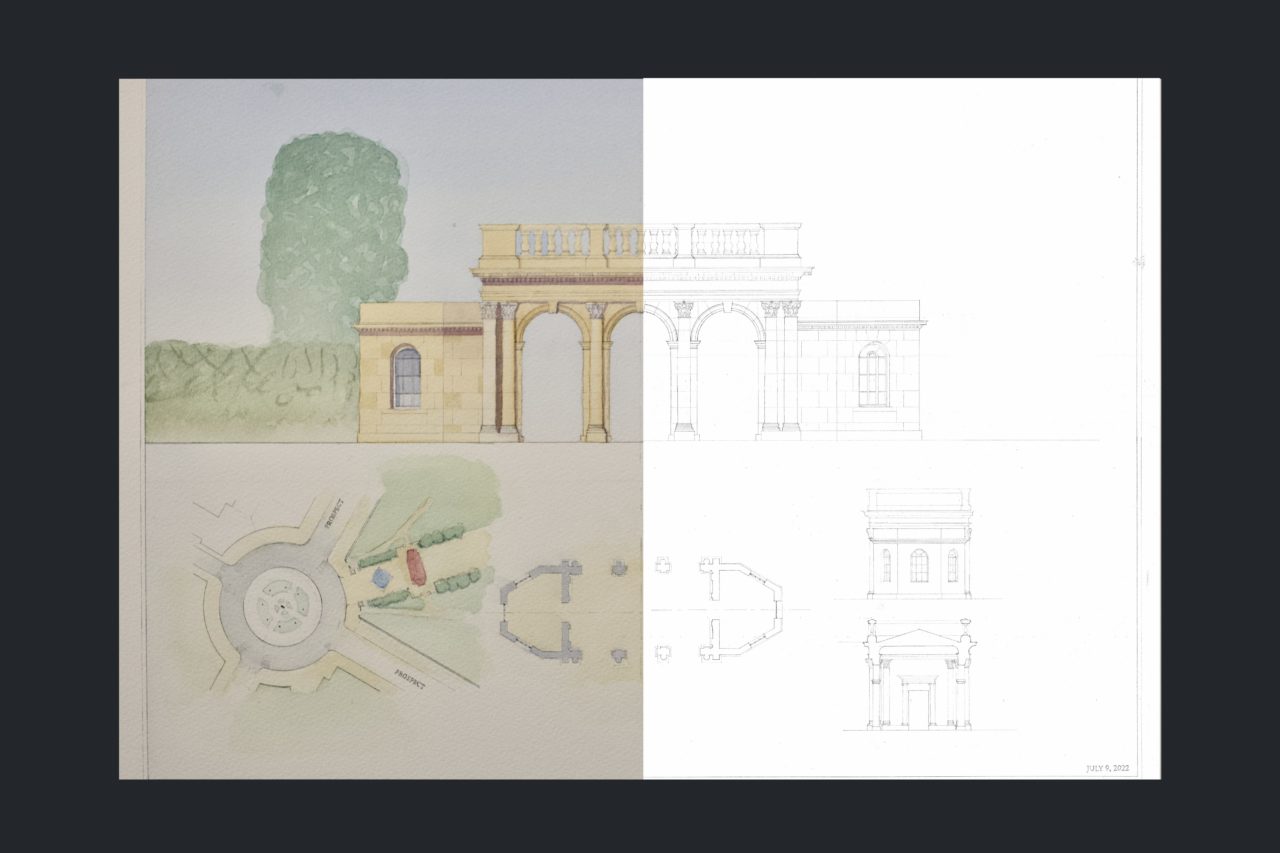 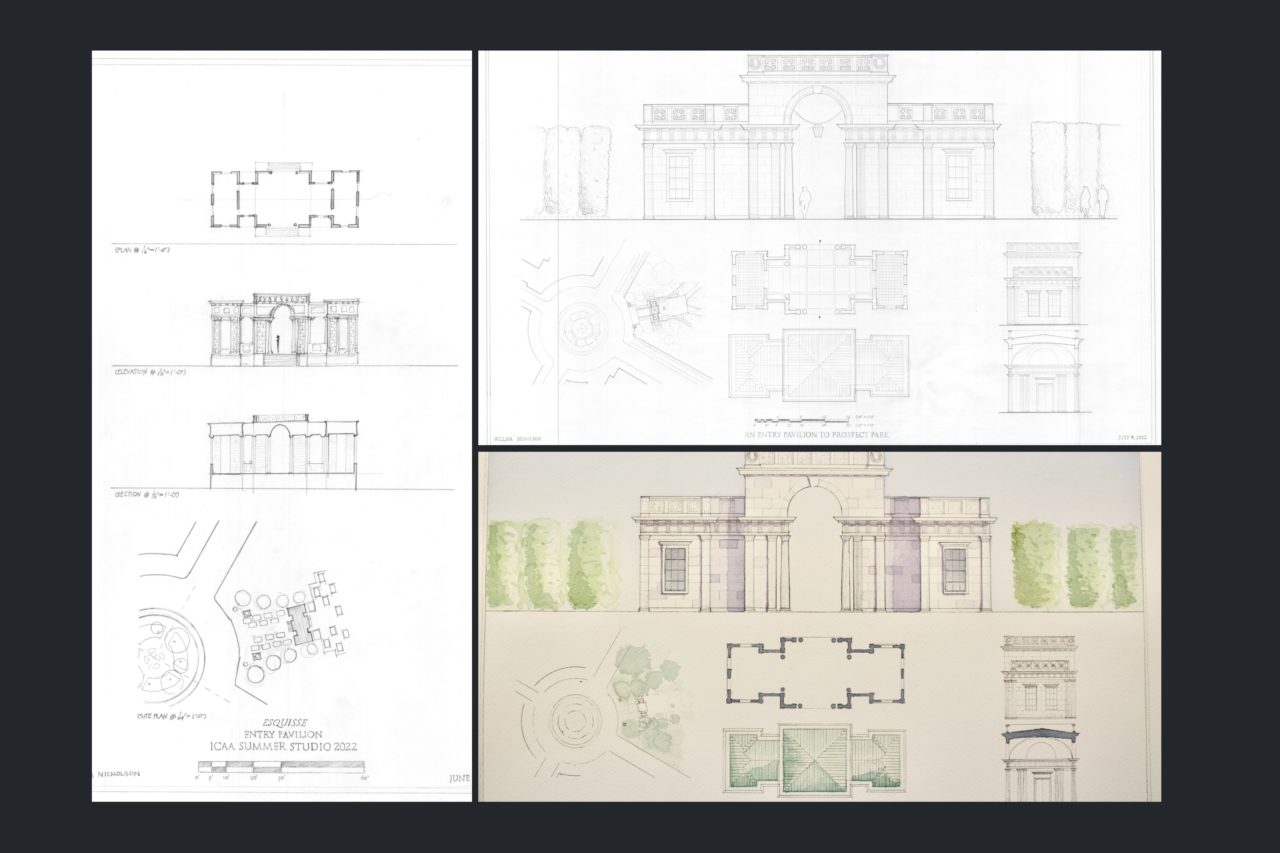 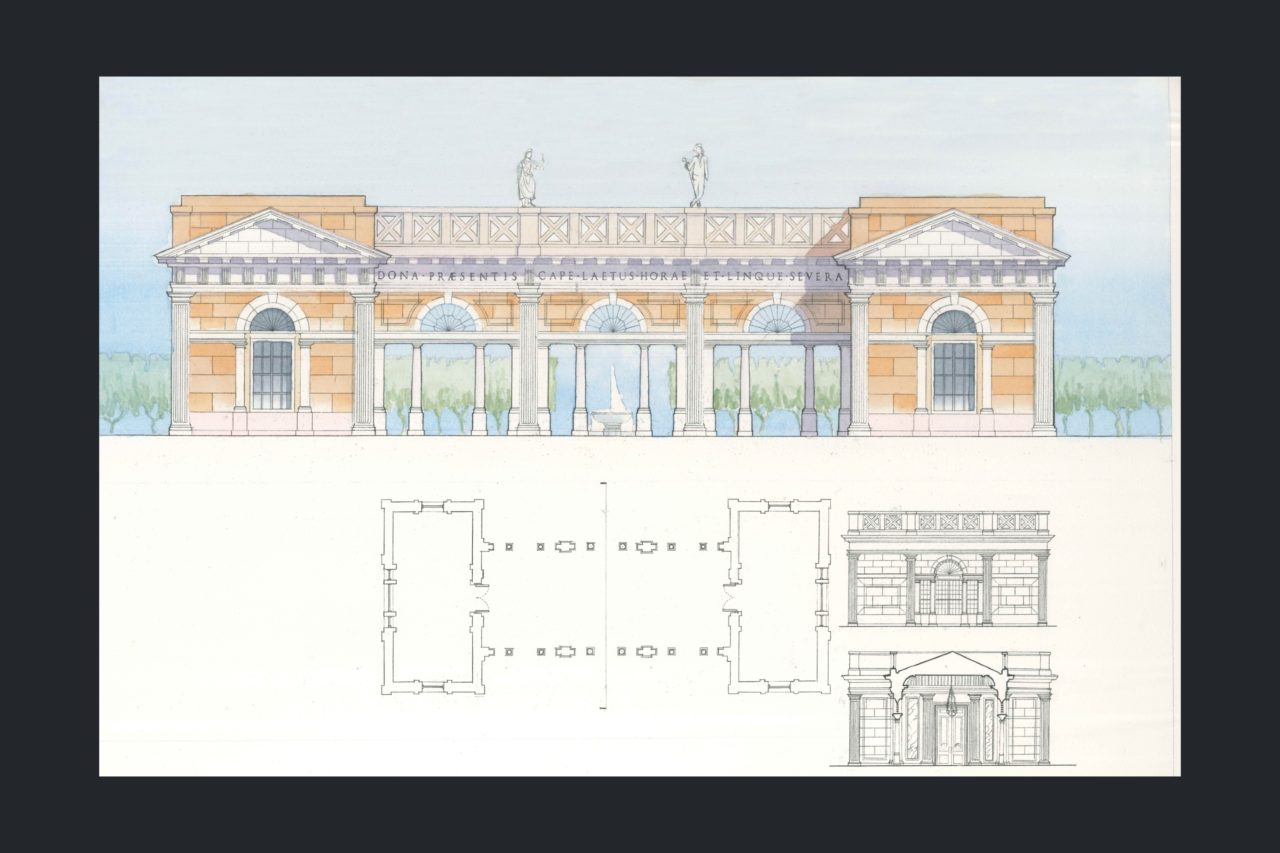 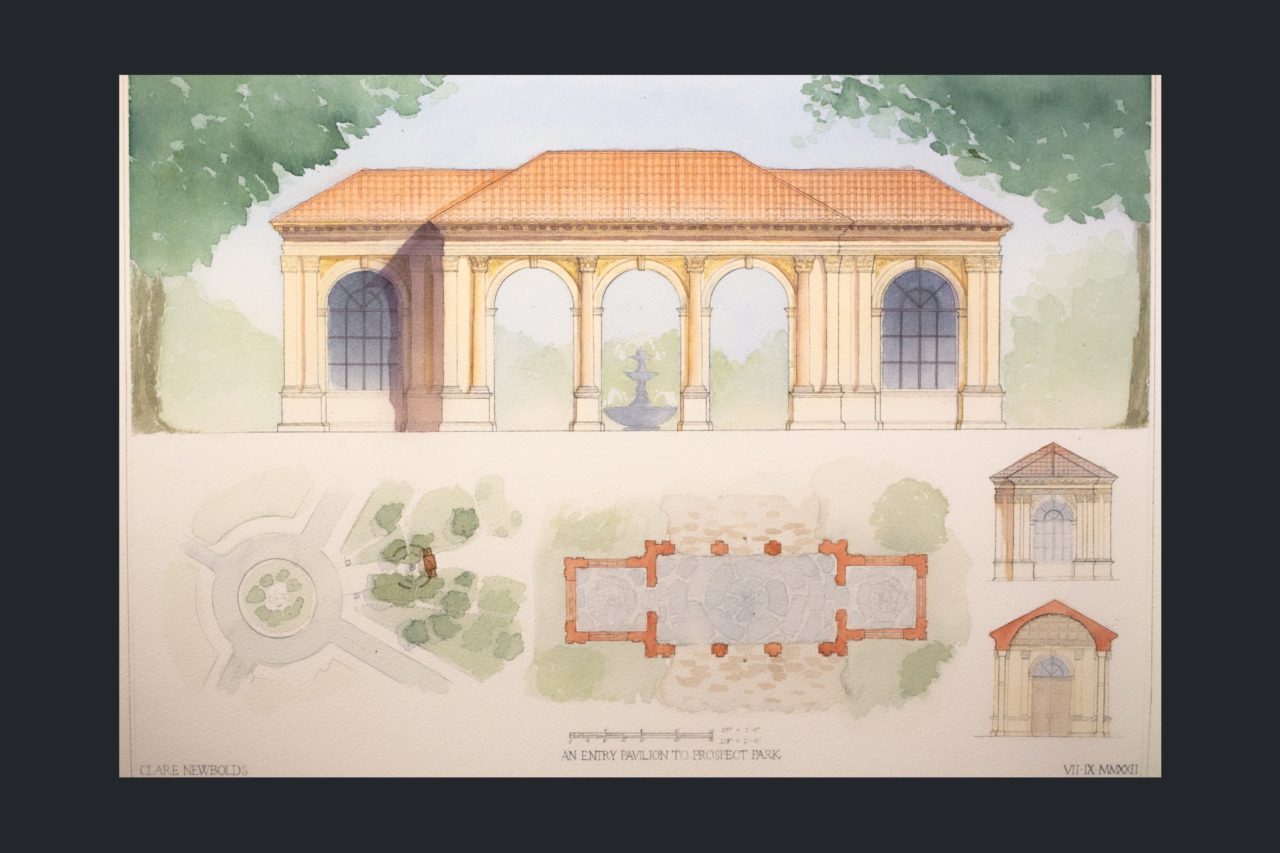 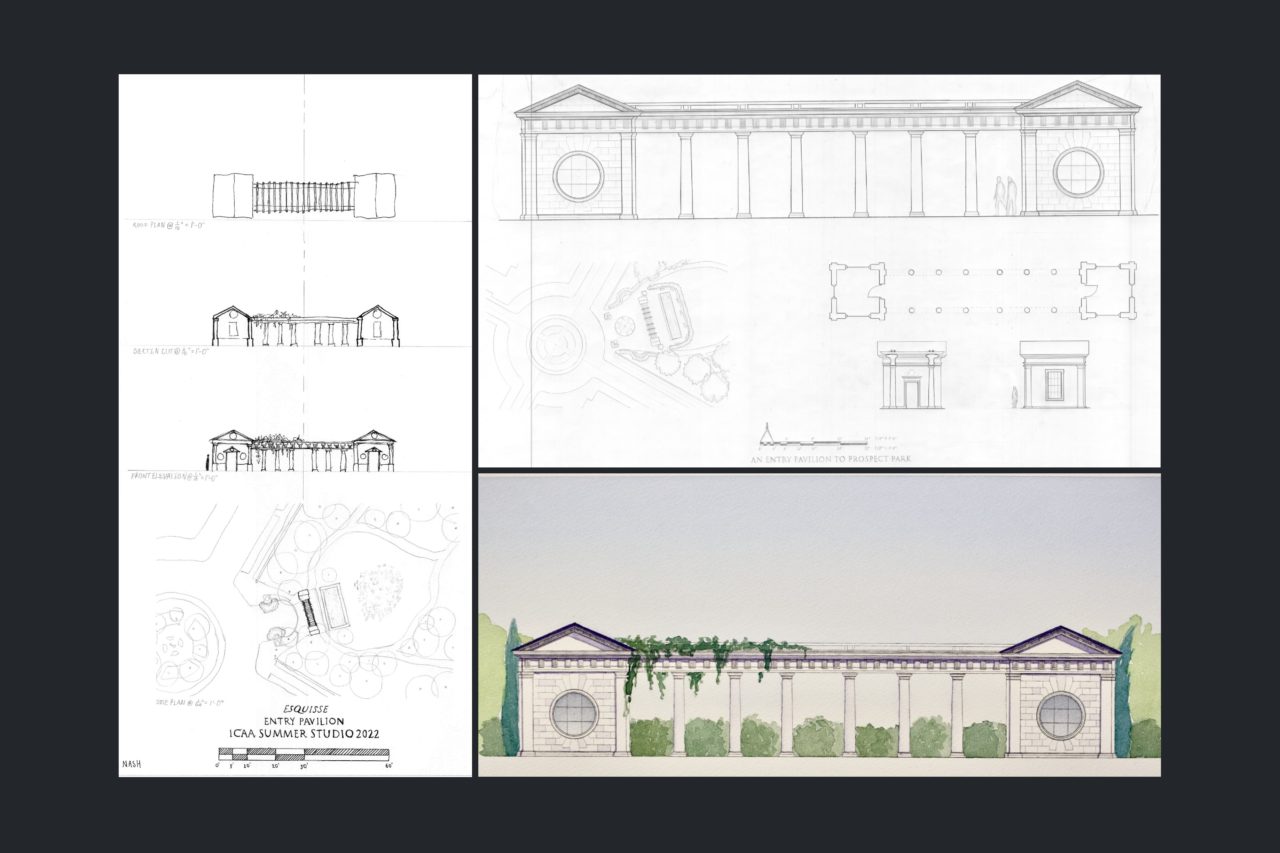 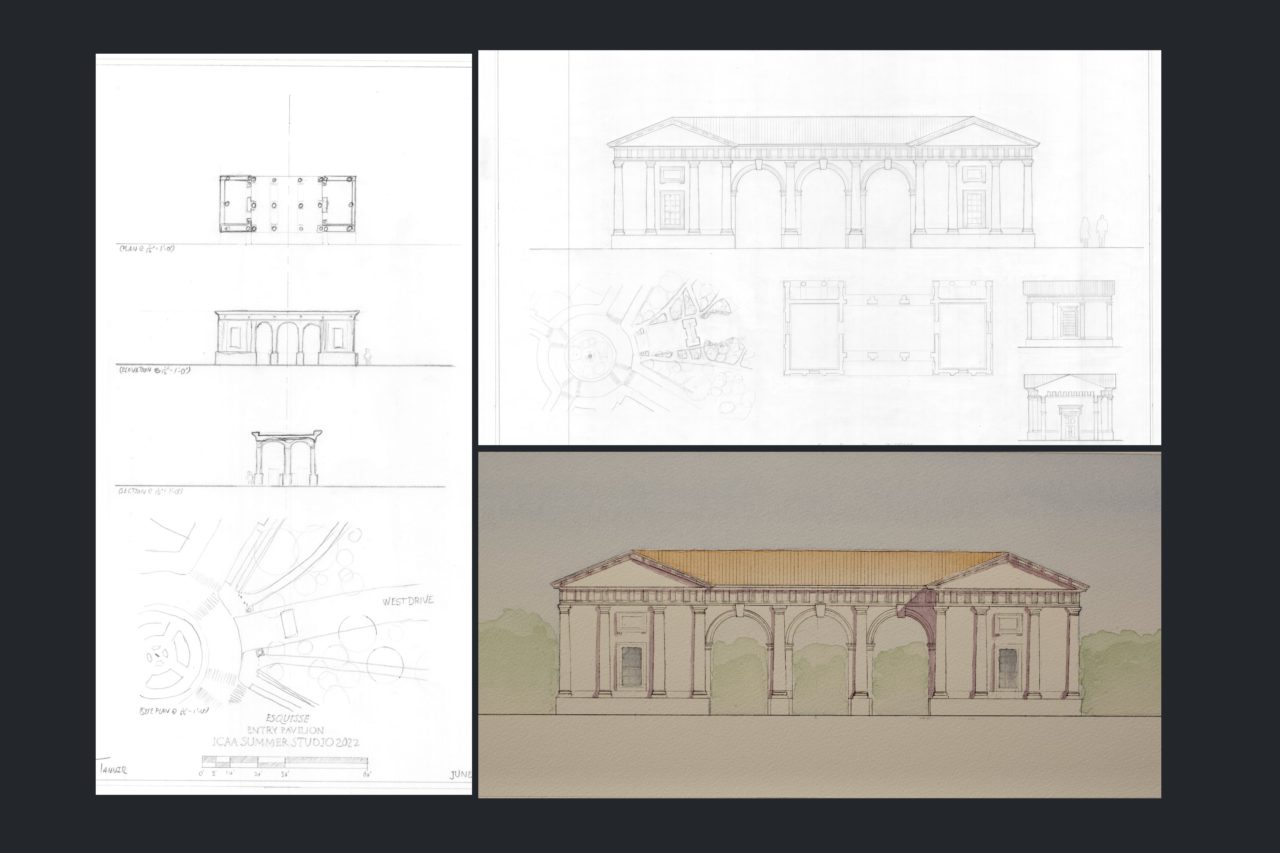 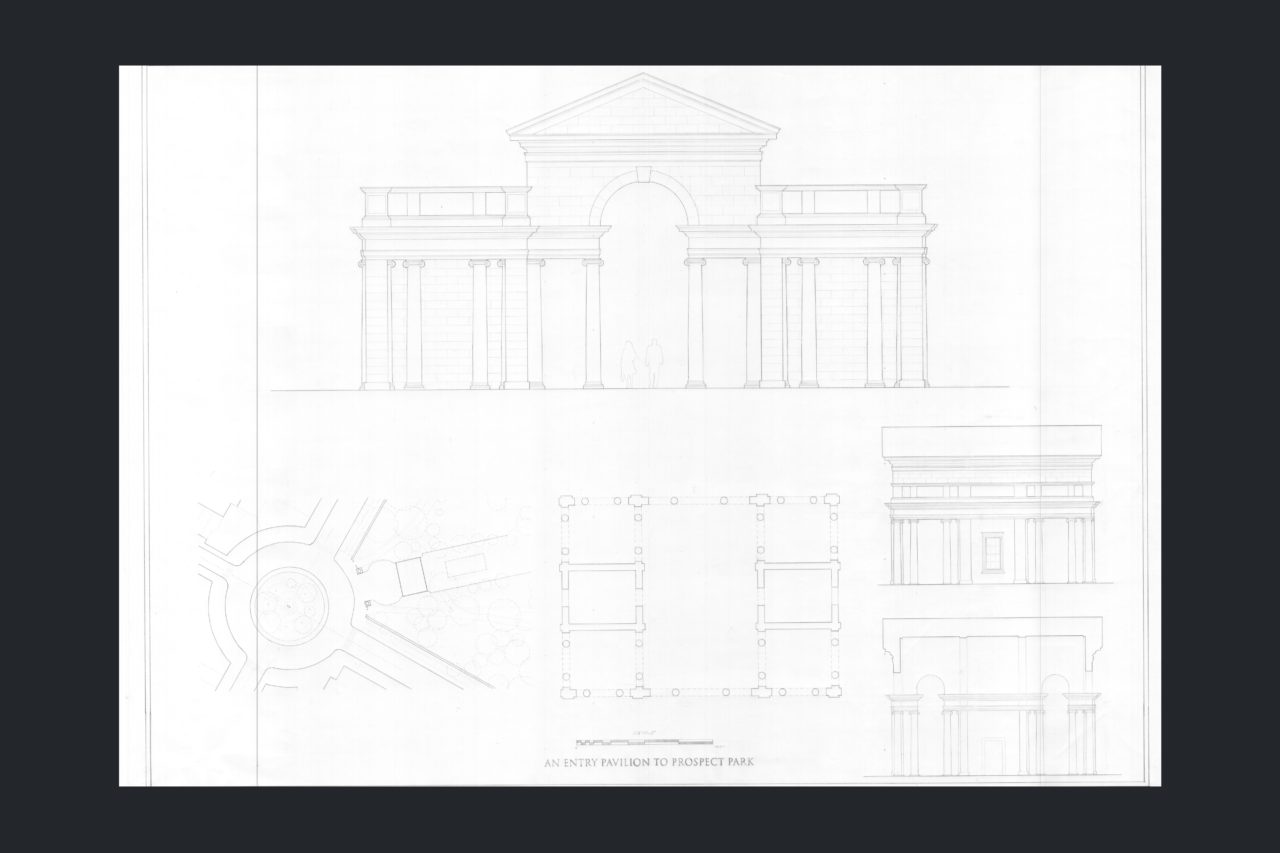 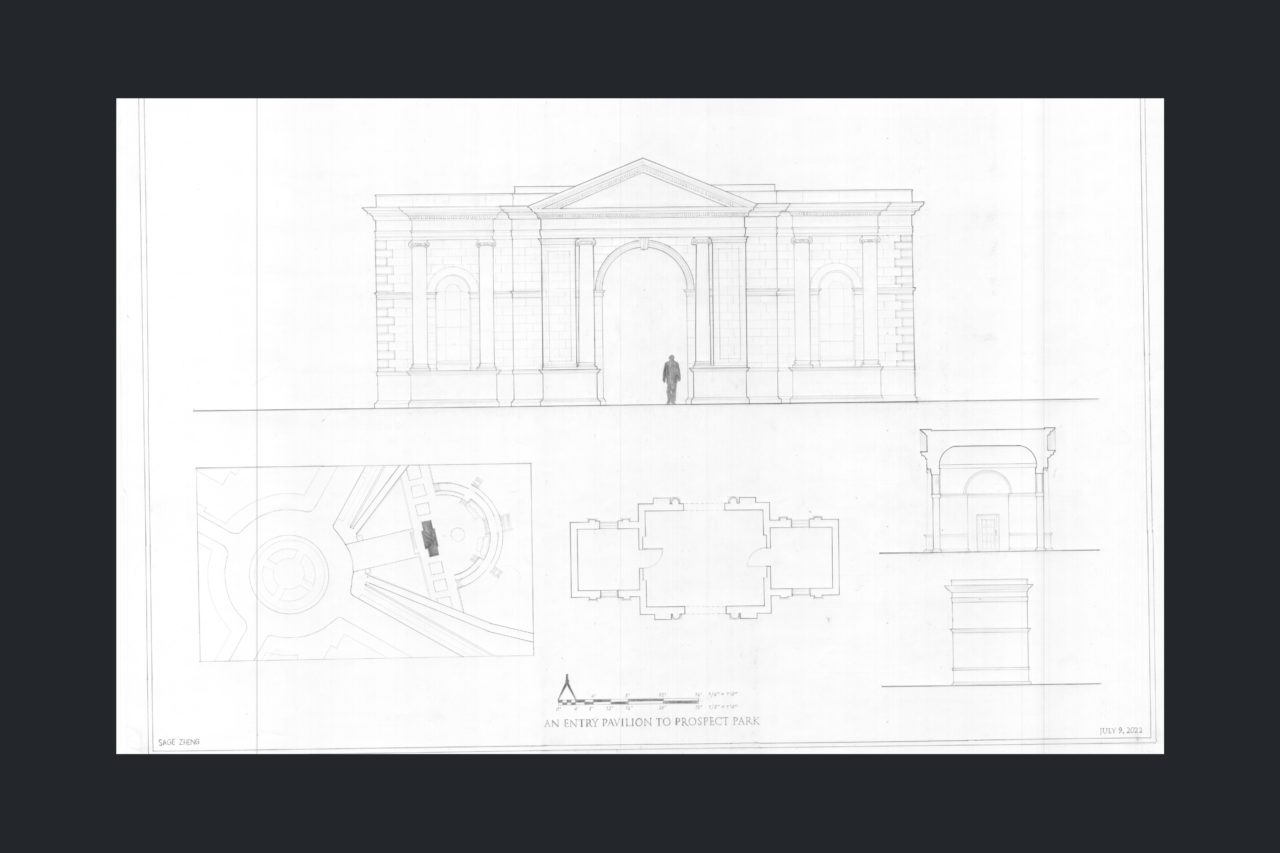 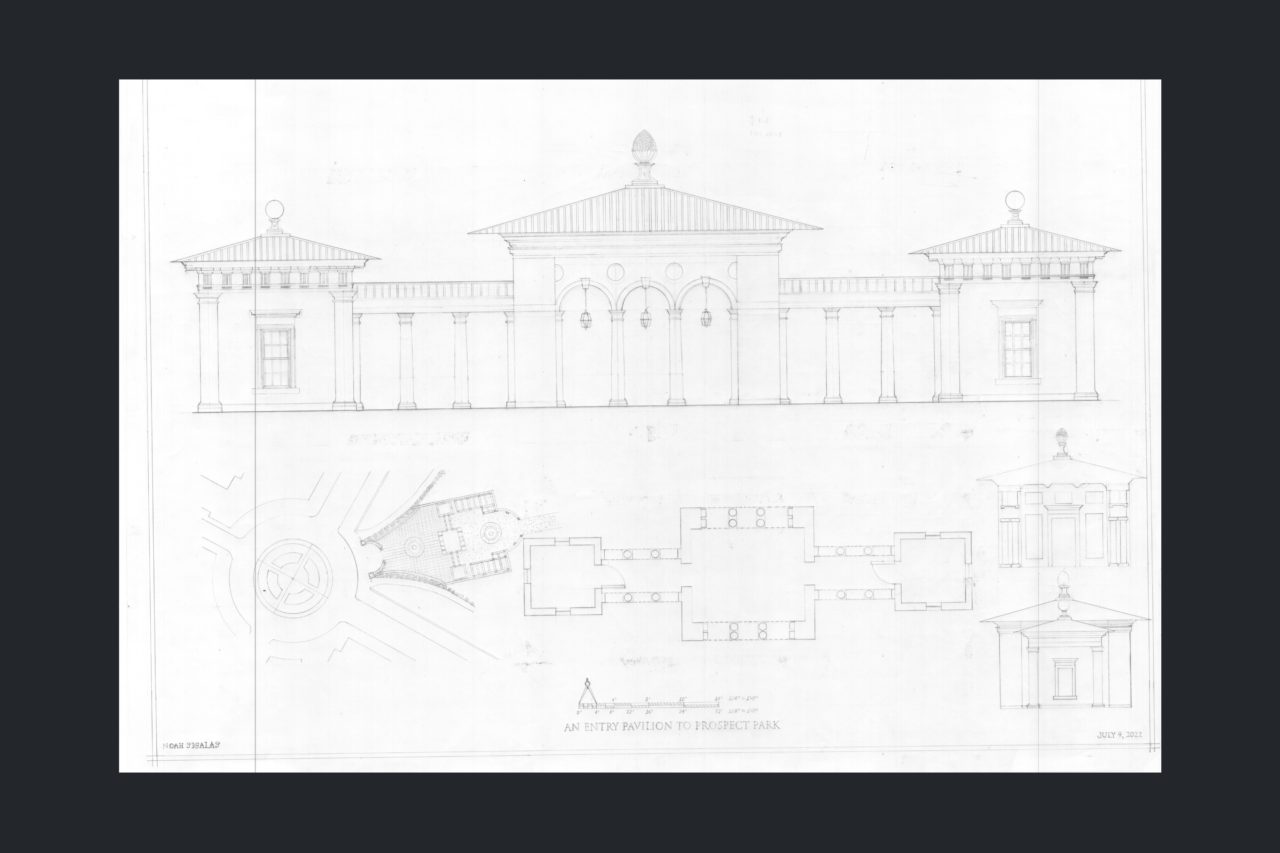 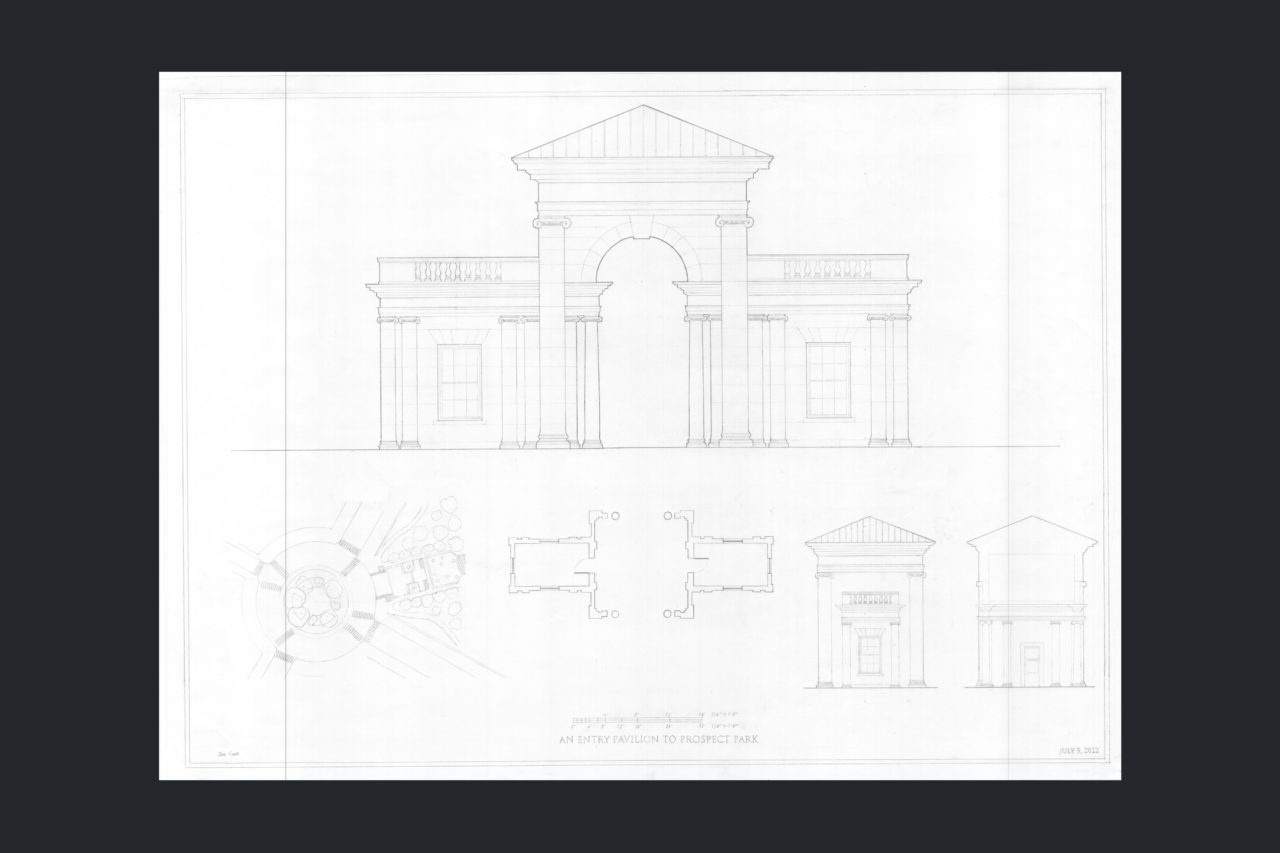 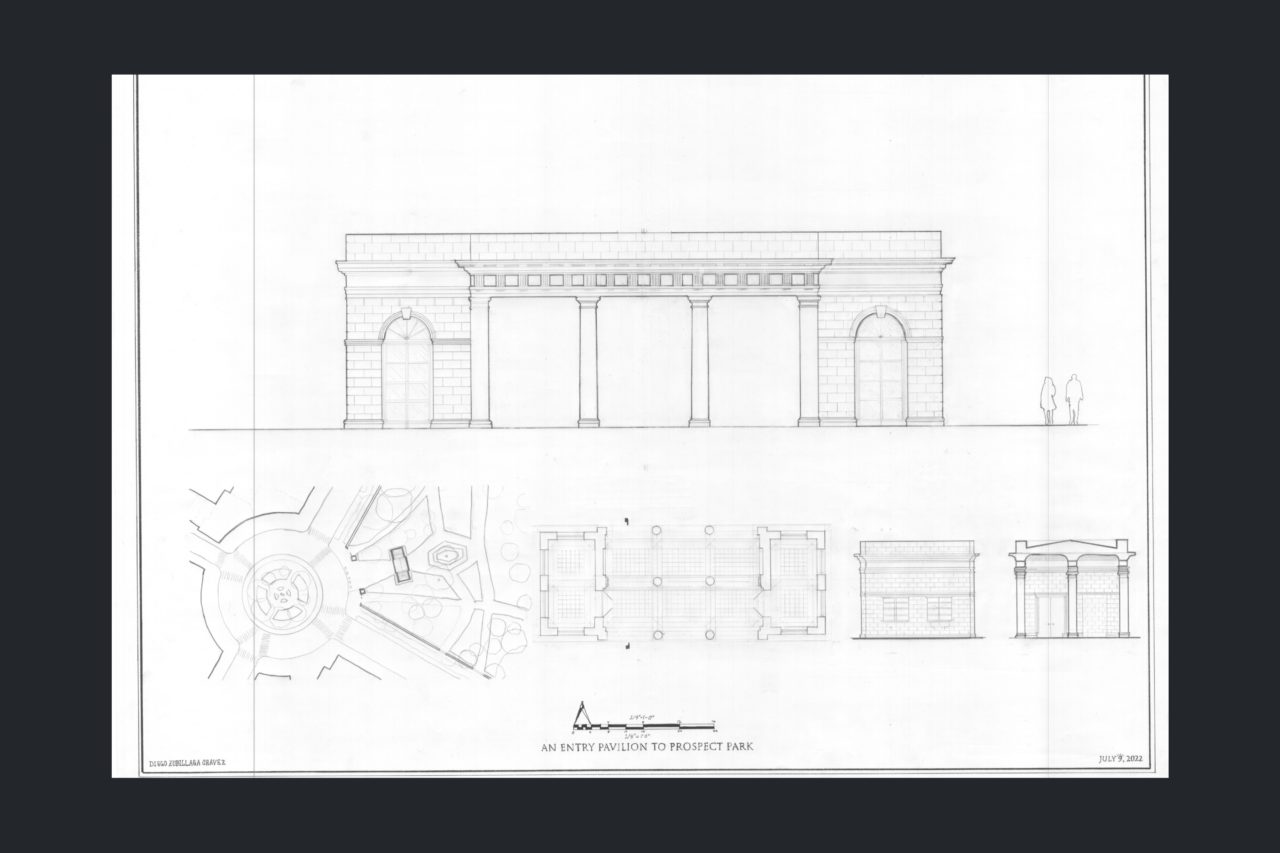 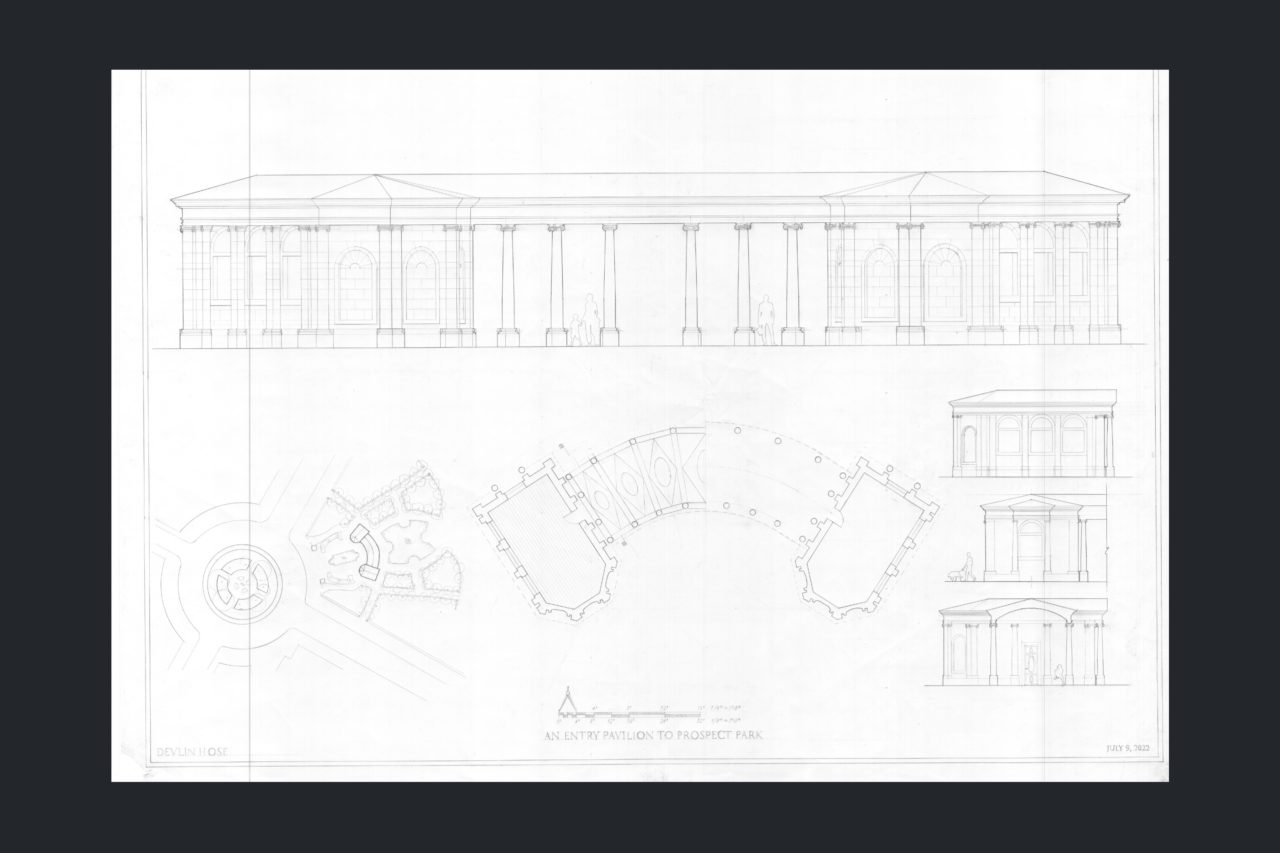 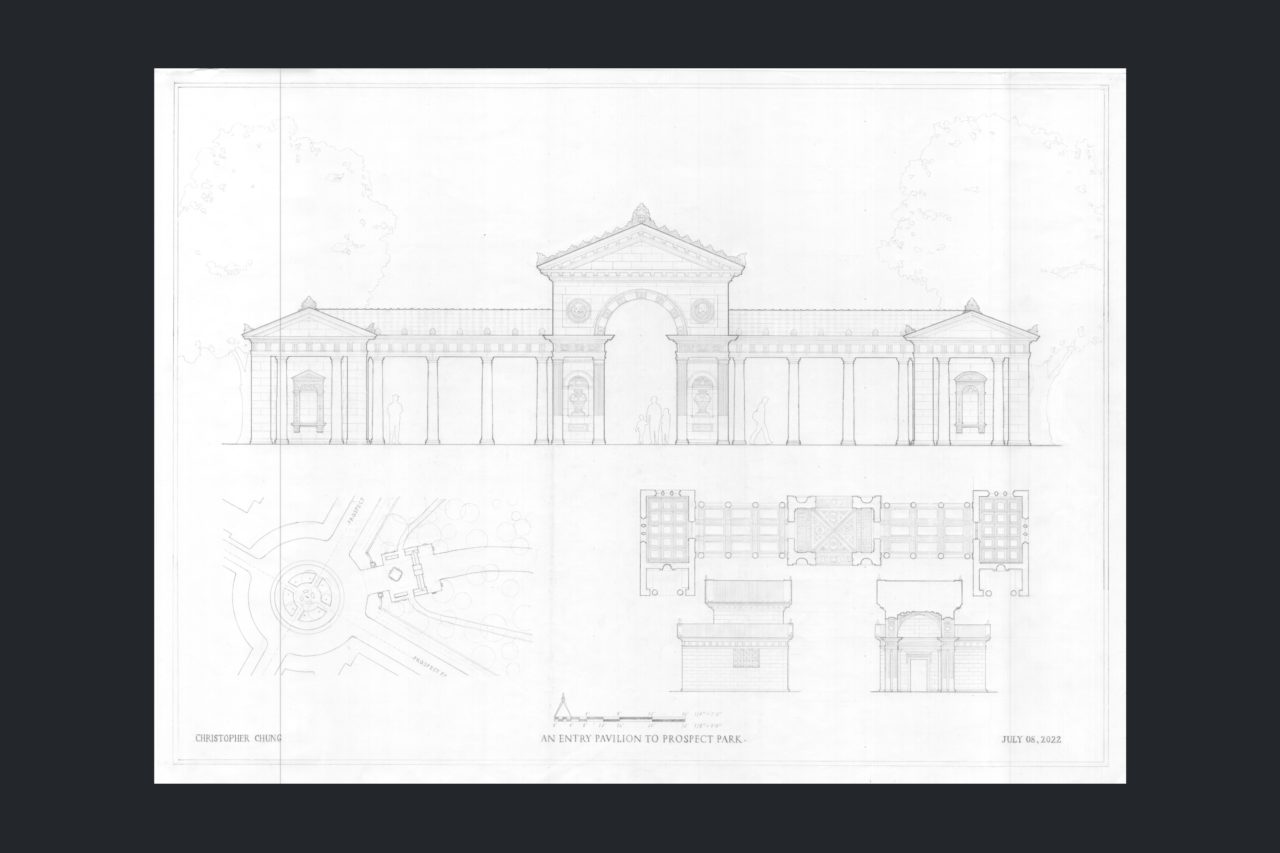 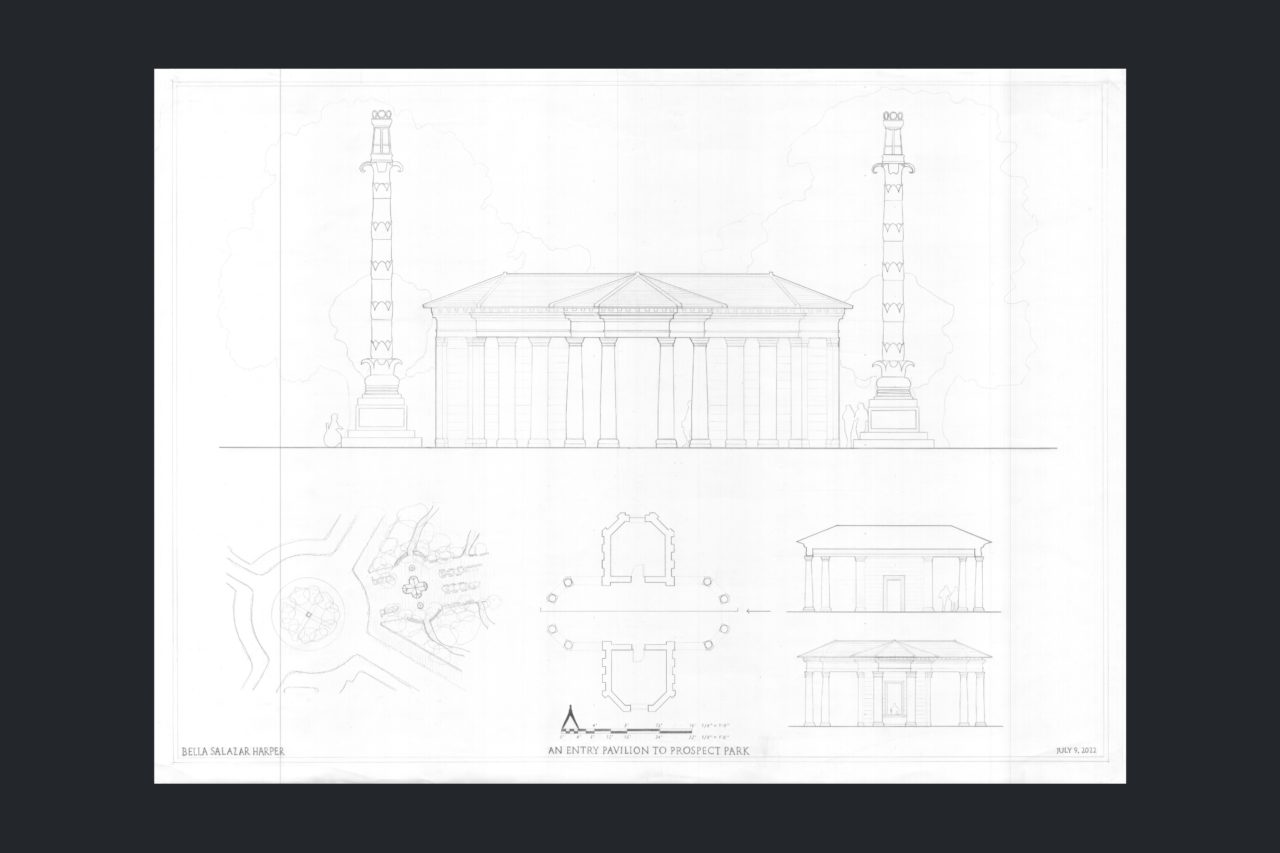 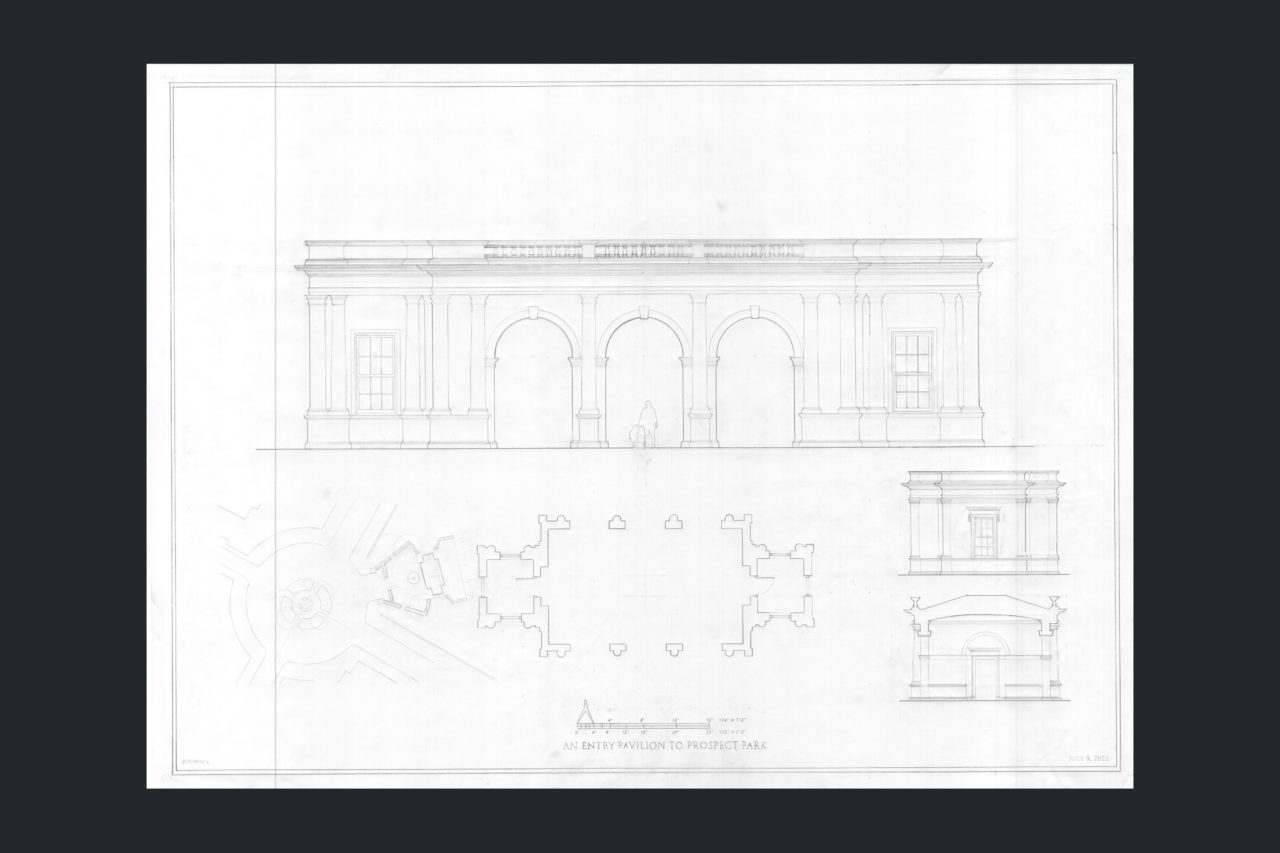 Comparison of final project and wash rendering by Claire Francois