Quan (Jerome) Zhai is the founder of Shanghai Study Group of Classical Architecture and an enthusiast of architectural art living in Shanghai. Quan also promotes American road trip and National Parks of USA voluntarily through his wemedia. From 2015 to 2018, Quan lived in Maryland, USA. Quan served as a marketing communication expert in different industries in China.

All photographs are by Quan (Jerome) Zhai.

“Originally a fishing village and market town, Shanghai grew in importance in the 19th century due to trade and its favorable port location. The city was one of five treaty ports forced open to foreign trade after the First Opium War. The Shanghai International Settlement and the French Concession were subsequently established. The city then flourished, becoming a primary commercial and financial hub of the Asia-Pacific region in the 1930s. From the 1860s to the 1930s, The Bund was the rich and powerful center of Shanghai.” — quote from Wikipedia. 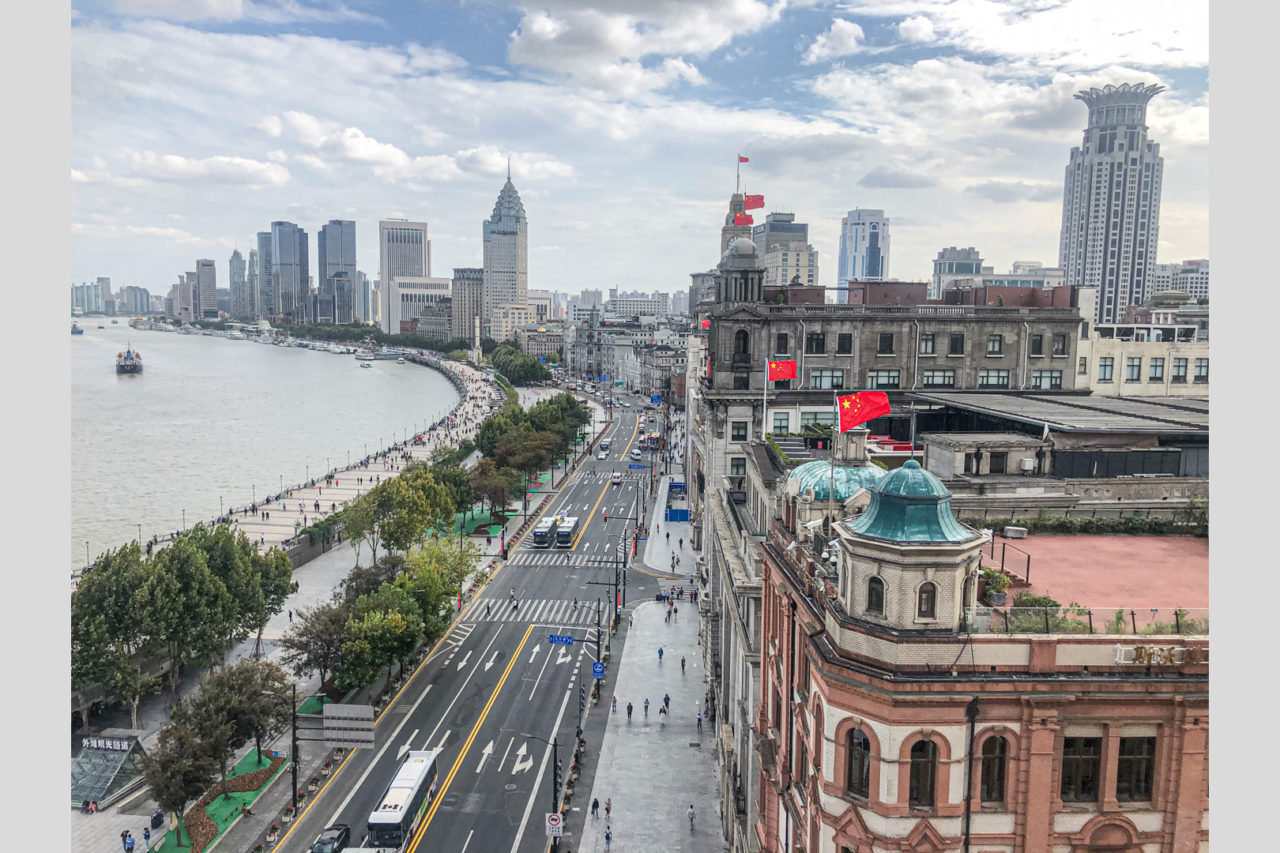 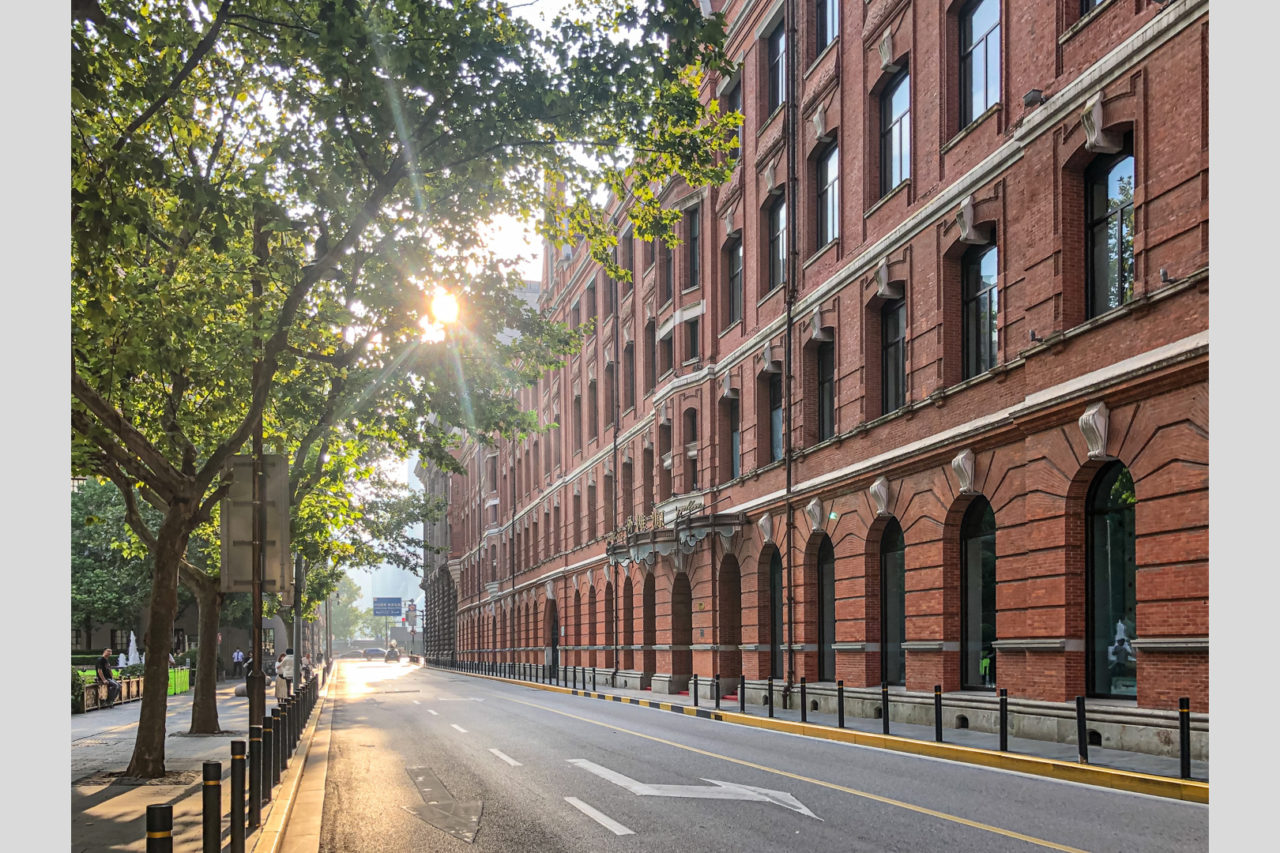 A bird's eye view of The Bund

Morning light on The Bund

Understanding the origins of Shanghai helps to provide context as to why Shanghai has such rich historical Western architecture and why much of it is located in The Shanghai Bund. Nowadays The Bund is not only the most famous tourist attraction in Shanghai but also a busy financial and commercial district of the city.

The Bund is a riverfront area and refers to a section of Zhongshan Road. The Bund runs a mile along the western bank of the Huangpu River, stretching from a T-junction between Zhongshan Road and Yan’an Road to the southern end of the Waibaidu Bridge. Within this section, there are 22 historical buildings directly facing the river and two former British consulate buildings being in a yard. They each have a special street number from the No.1 Bund to the No. 33 Bund. Some street numbers were reserved or combined and will never be used again.

The best time to enjoy the buildings of The Bund is one hour after sunrise. There isn’t rush hour traffic or groups of people during the early morning. The sun peeks over the skyscrapers from the other side of the river and gradually lights up the delicate facades of the century-old buildings. 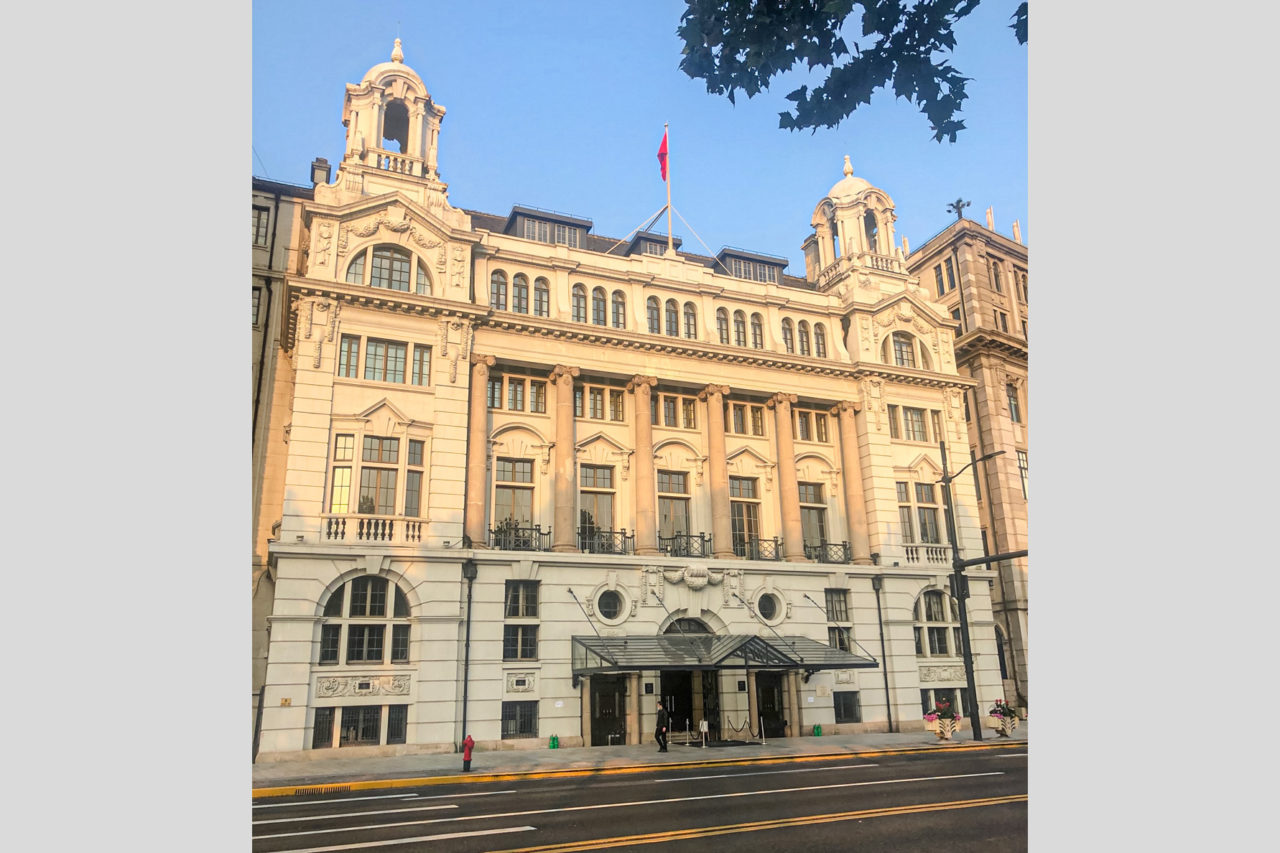 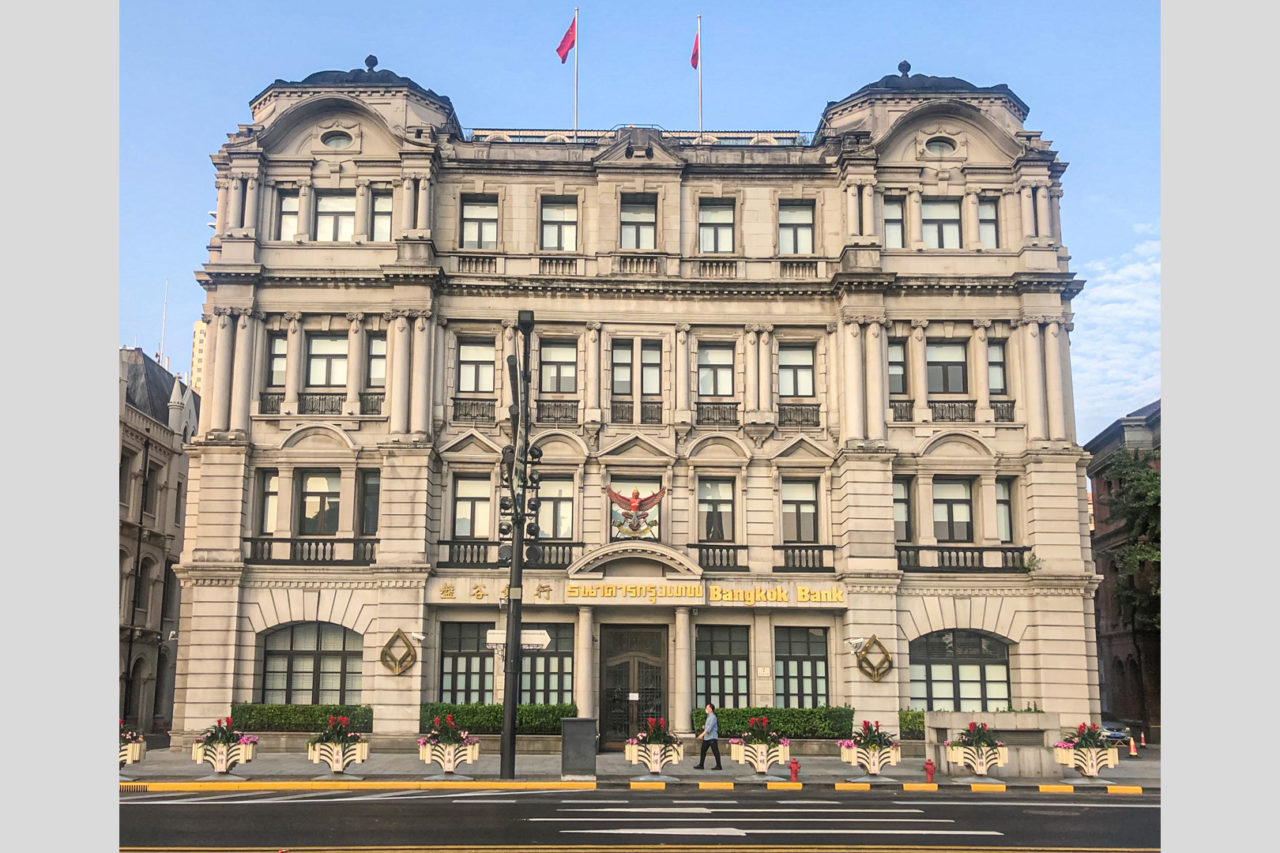 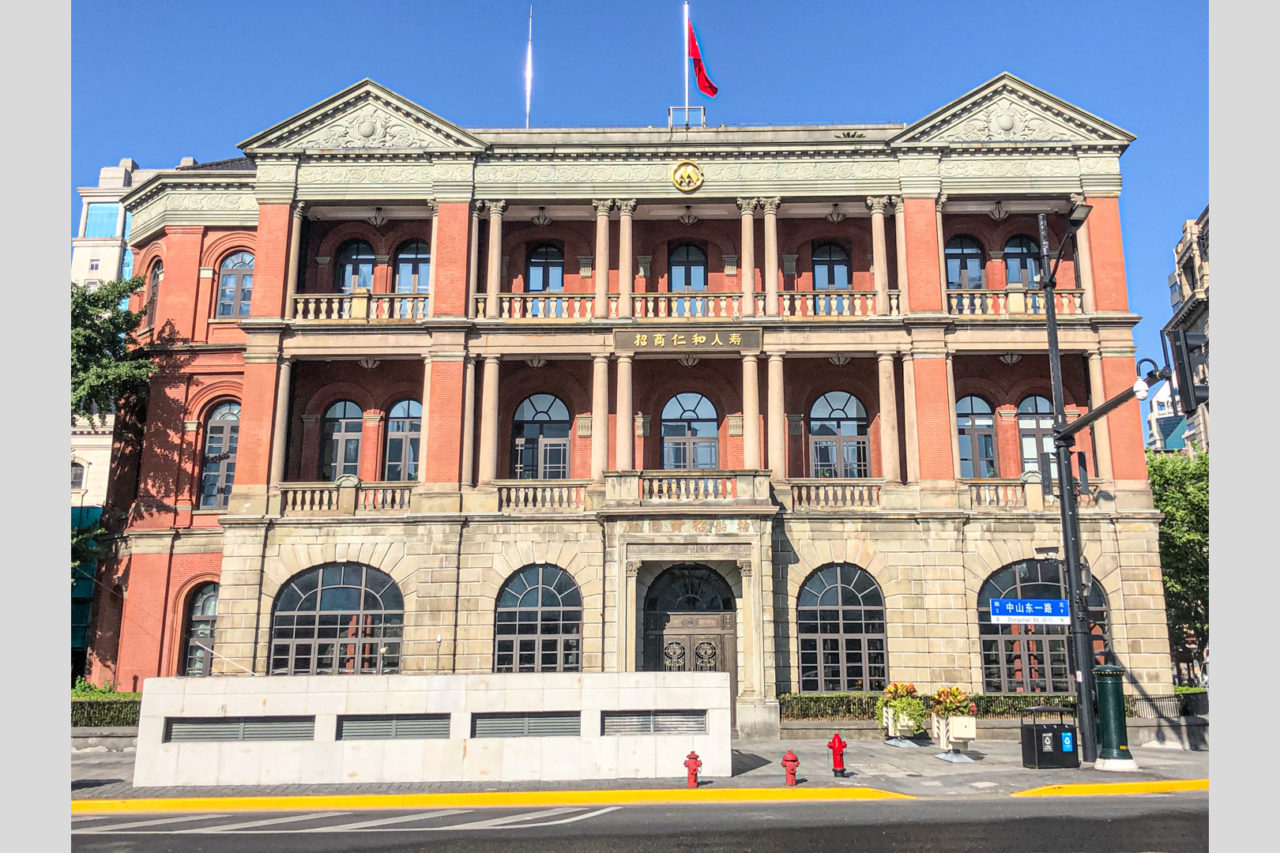 No. 2, The Shanghai Club Building

To start our classical architecture tour we have the No.2 Bund, a second-generation Shanghai Club building completed in 1910 which formerly served as the principal men's club for British residents of Shanghai. Today it is a part of the Waldorf Astoria Shanghai. It is a six-story (five above the ground) Renaissance (revival) style building with characteristic extravagant ornamentation consistent with Baroque architecture. The front facade features a tripartite division. The entrance of the building greets visitors with a Palladian arch complete with two circular openings on spandrels. The entrance is reminiscent of the Basilica Palladiana. Six red granite Ionic columns reach over the second and third floor. Alternating pediments are present in the bays of columns. Under the Baroque cupolas are two Diocletian windows surrounded by craving swags. The same swags can also be found above the main arch of the entrance. Undoubtedly, the facade of the Shanghai Club is the most impressive along The Bund. Moorhead＆Halse, a British contractor contributed the masterpiece to the city.

The No.7 Bund or the Great Northern Telegraph Building is another Renaissance Architectural masterpiece. It was built in 1908 by Atkinson＆Dallas Architects and Civil Engineers Ltd. The building features many hallmarks of the Renaissance such as symmetrical and tripartite facades, alternating pediments on the second floor, and single and paired Ionic columns flanking windows on the third and fourth floors. Two segmental iron domes with octagon drums contribute Baroque features to the building.

The China Merchants Steam Navigation Company Building or the No.9 Bund is the shortest and oldest building in The Bund. It was built by the English company Morrison in 1901. The China Merchants Steam Navigation Company was one of the earliest SOEs of the Qing Dynasty. The building thus stands as a symbolic and memorable example of China’s early modernization efforts. The main three-story structure is made of brick, stone, timber, and steel. The masonry arches on the first floor, the portico on the second and third floors, and the Pediments on the roof are reminiscent of ancient Roman architectures. The Corinthian columns being built above the Tuscan columns follows a principle of classical design. 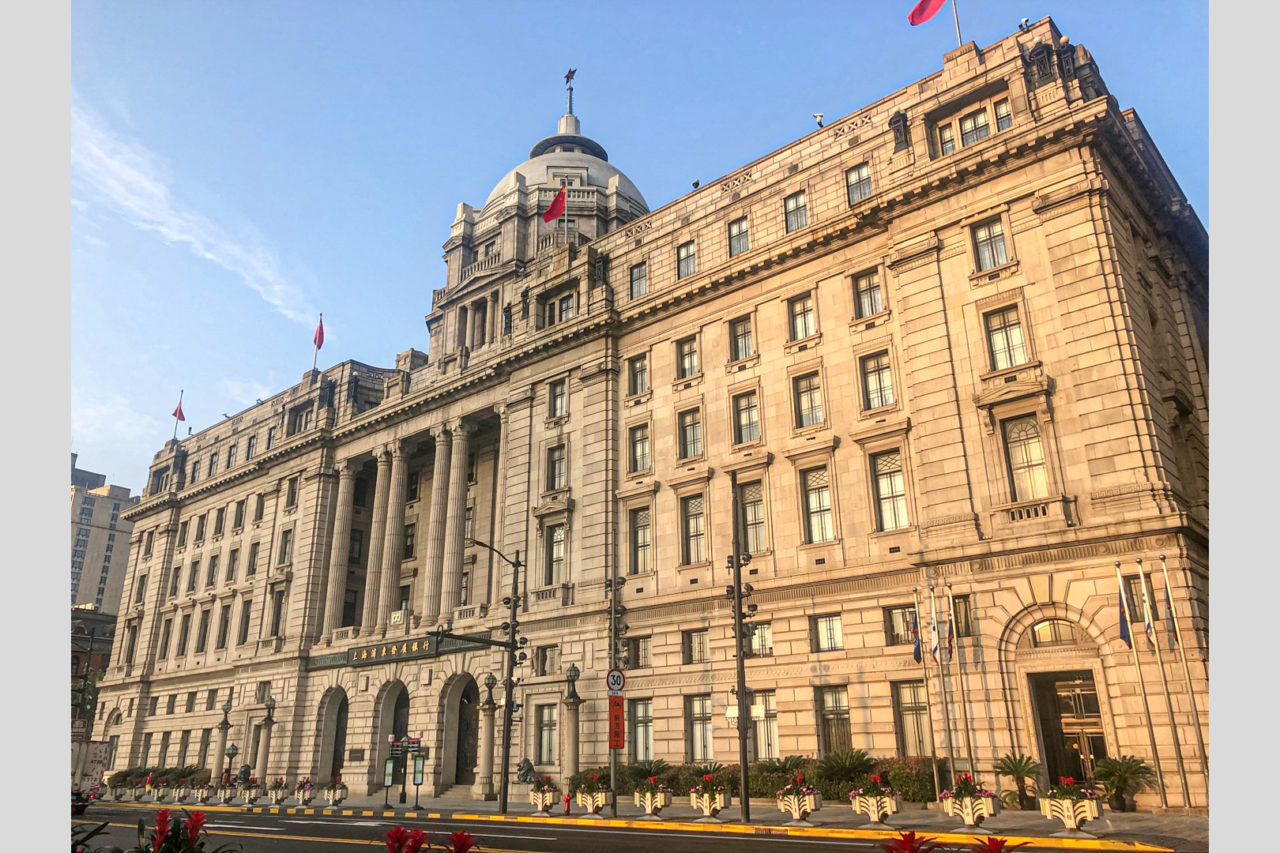 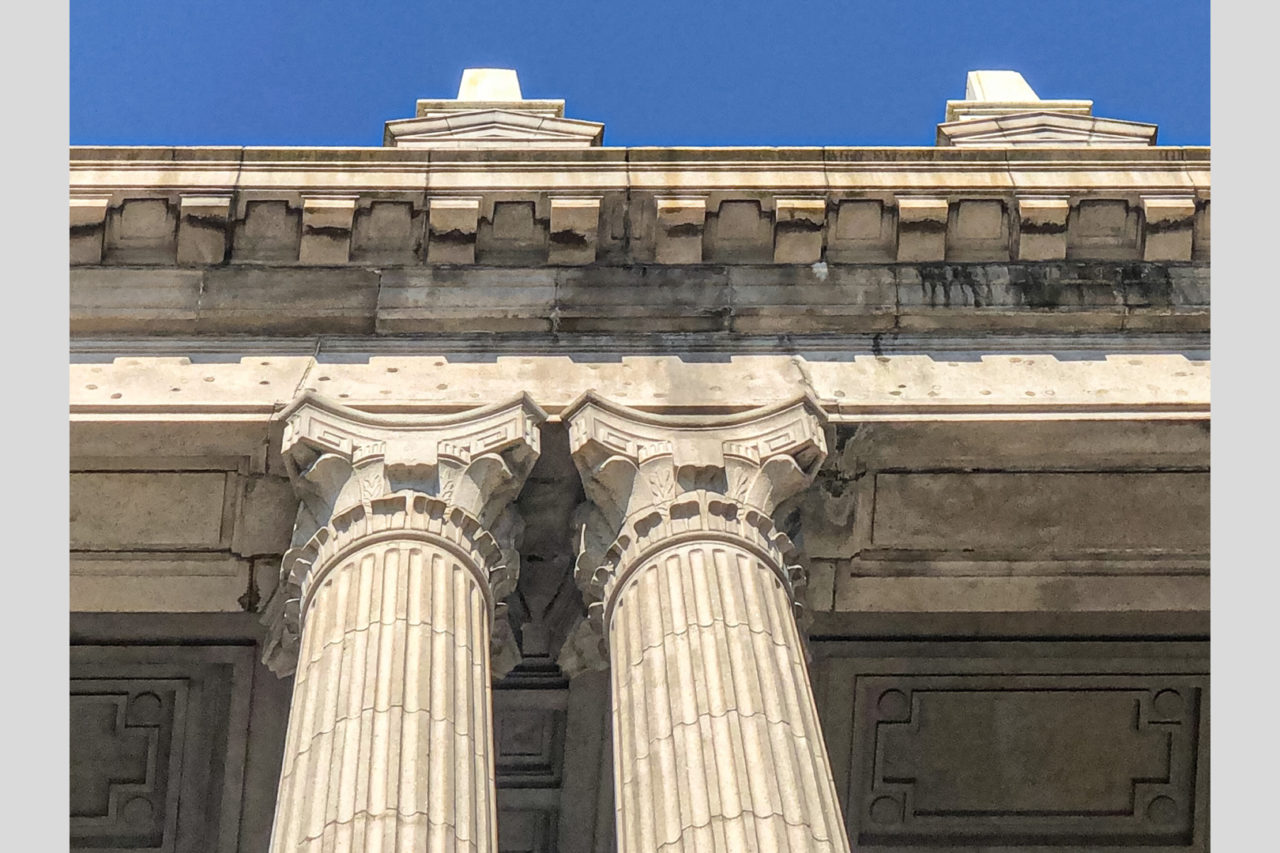 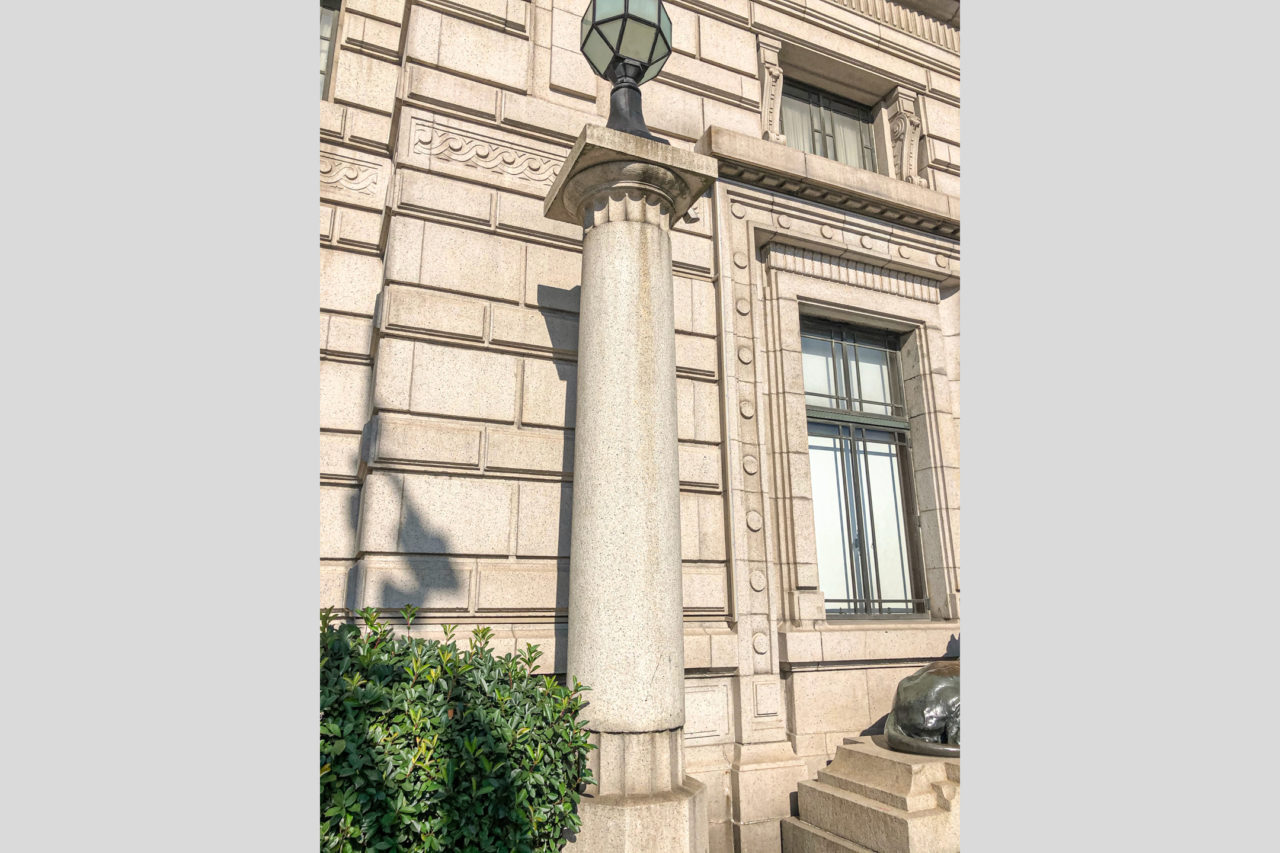 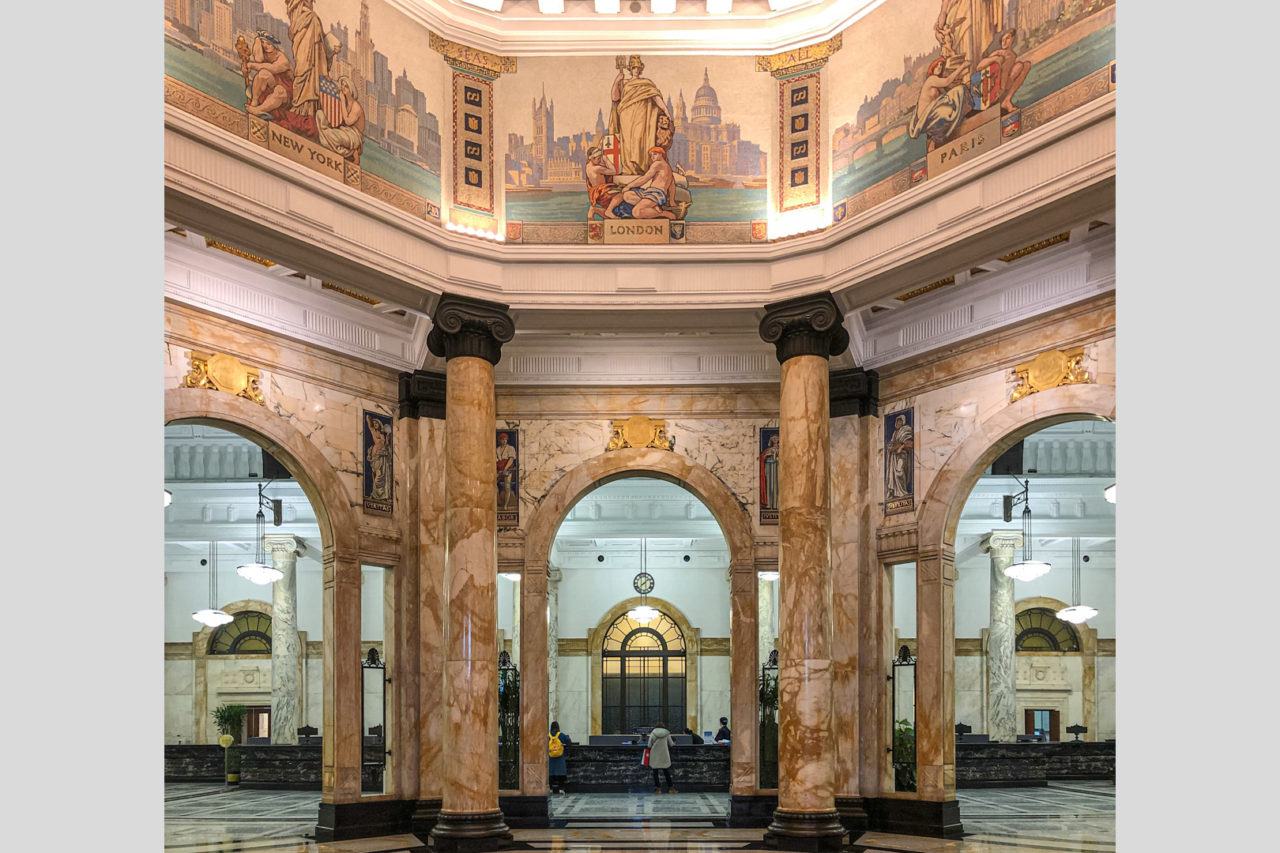 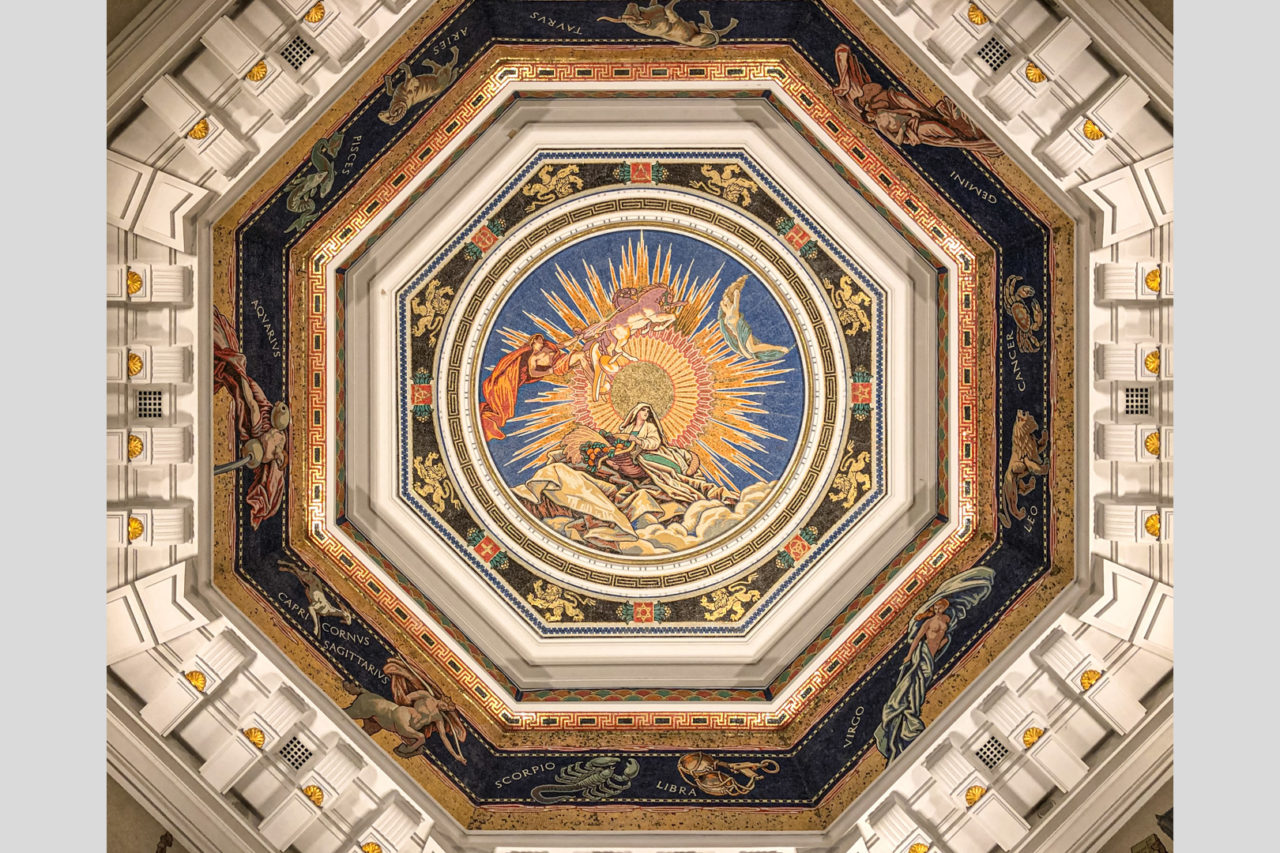 No. 12, The HSBC Bank Building

Originally serving as the HSBC building, then as the Municipal Government Building, the No. 12 Bund is the most majestic building of The Bund and is an icon of the city. Completed in 1923, the building was, at the time, the largest banking building in the Far East and a symbol of the “Gilded Age of Shanghai.” The six-floor Beaux-Arts building was designed by Palmer & Turner Architects and Surveyors, a British firm. The longest facade of The Bund consists of the five-part pattern: two pavilions, one on each end, with slightly recessed wings and a central entrance topped with huge columns that draw the eye to the dome. The combination of the rusticated stone arch in the lower section and the two paired columns in the middle are similar to that of the facade of the Thomas Jefferson Building in the Library of Congress. The building’s complex and highly decorative dome maintains a perfect proportion with the main body and always draws the attention of visitors. One noteworthy feature is the unique “Chinese-Greek composite order.” The volutes of the composite capitals were replaced with traditional Chinese quadrate patterns (fret). The free-standing Delos Doric lamp-posts near the main and side entrance are yet another unique detail of the building.

The interior decoration of the building is also mesmerizing. The interior walls of the octagonal entrance hall have eight mosaic murals depicting landscapes of cities where HSBC branches were present. The ceiling of the dome is decorated with frescos depicting 12 zodiac signs along with personifications of the Sun and Moon. 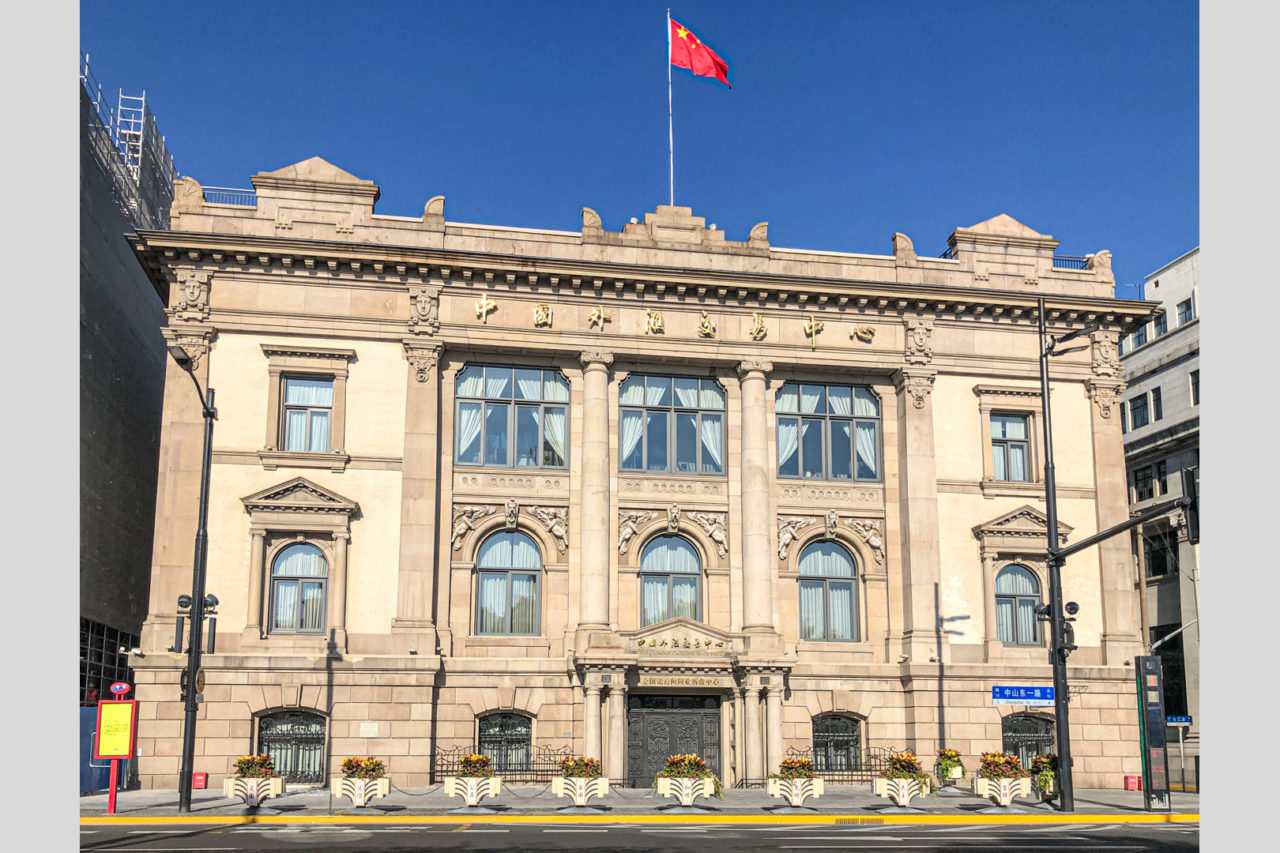 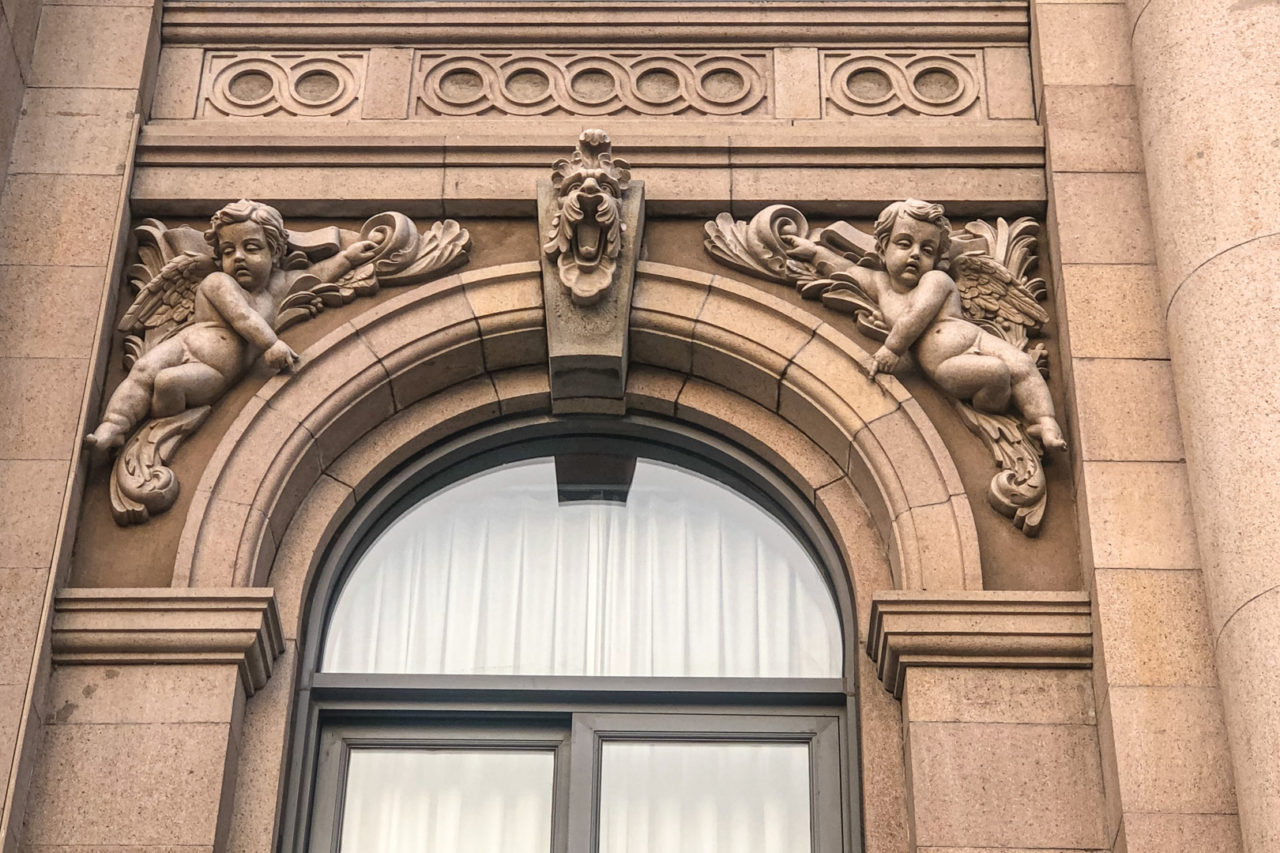 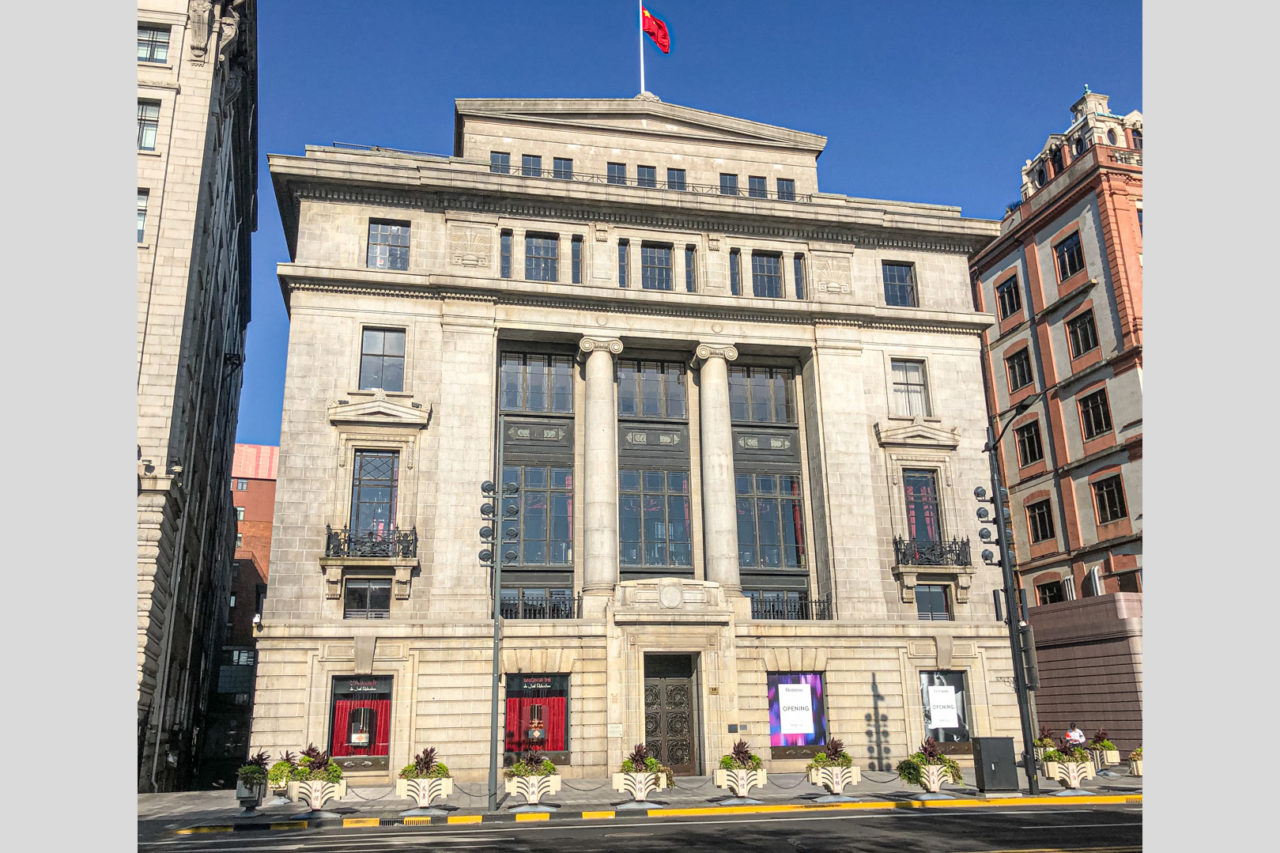 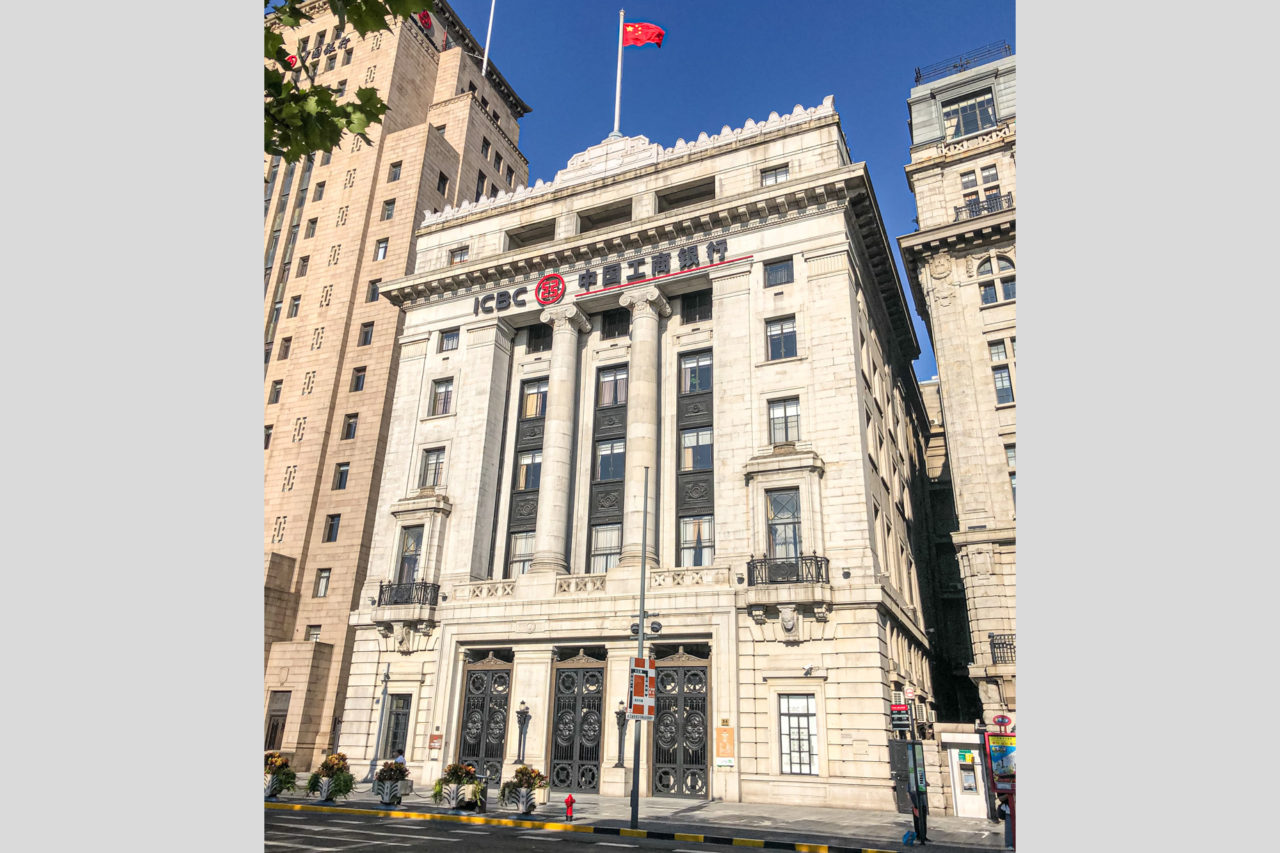 No. 15, The Russo Chinese Banking Building

No. 16, The Bank Of Taiwan Building

No. 18, The Chartered Bank Building

No. 24, The Yokohama Specie Bank Building

Built in 1902, the Russo-Chinese Bank Building or the No.15 Bund is another Beaux-Arts building designed by Heinrich Becker, the first Prussian architect in China. Many Beaux-Arts characteristics can be found in this elegant building. The three main arched windows are decorated with mascaron keystones and figurative sculptures of angels. Mascarons also appear on the frieze of the building. The acroterions on the roof help the Russo-Chinese Bank building to standout in The Bund.

The Bank of Taiwan Building or the No.16 Bund is set on a podium and has a tetrastyle portico. With six pilasters on the sidewall, the building is one that resembles a Roman pseudoperipteros temple.

Built in 1922 and 1924 respectively, the Chartered Bank building or the No.18 Bund and the Yokohama Specie Bank Building or the No. 24 Bund are like twins. They are both pieces of Neoclassical architecture and have a similar layout of their facades as seen in their two huge Ionic columns in the middle section. 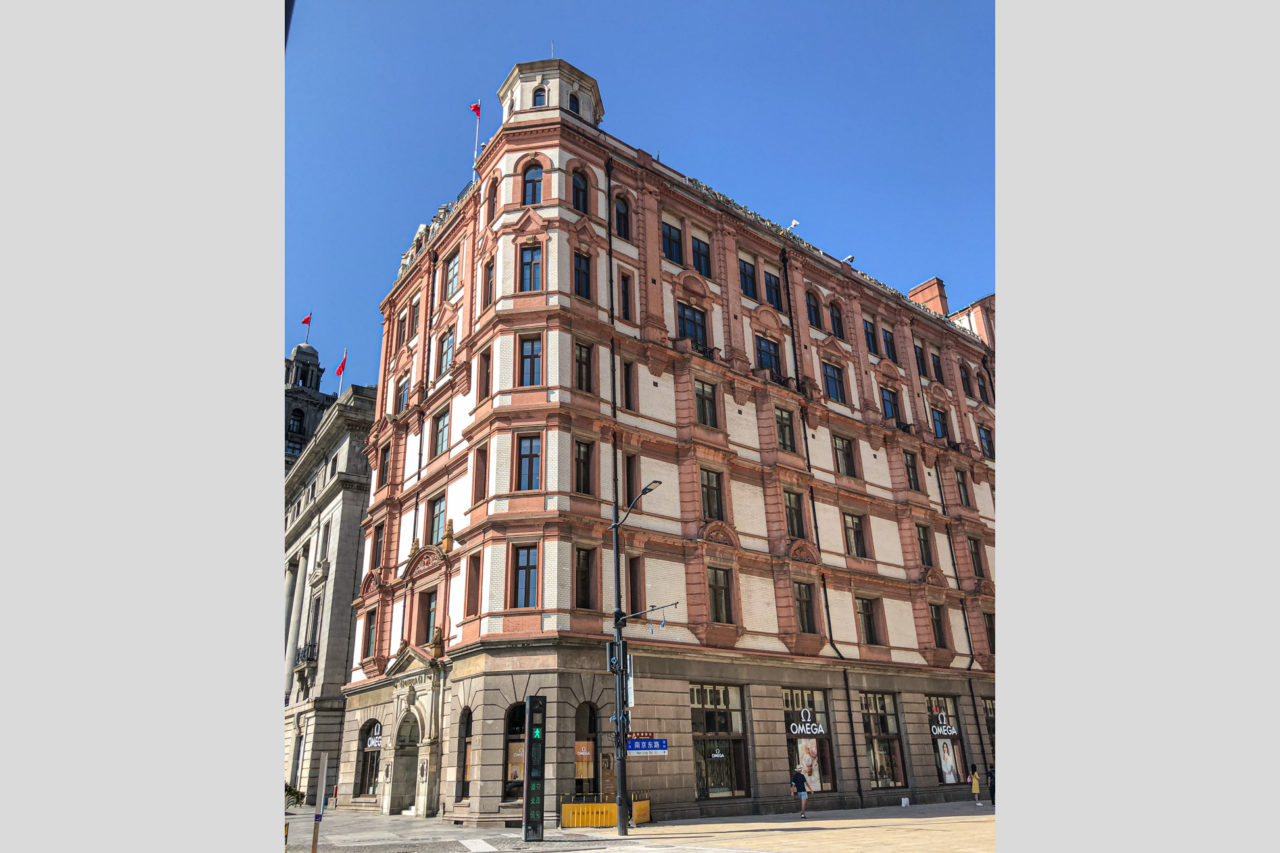 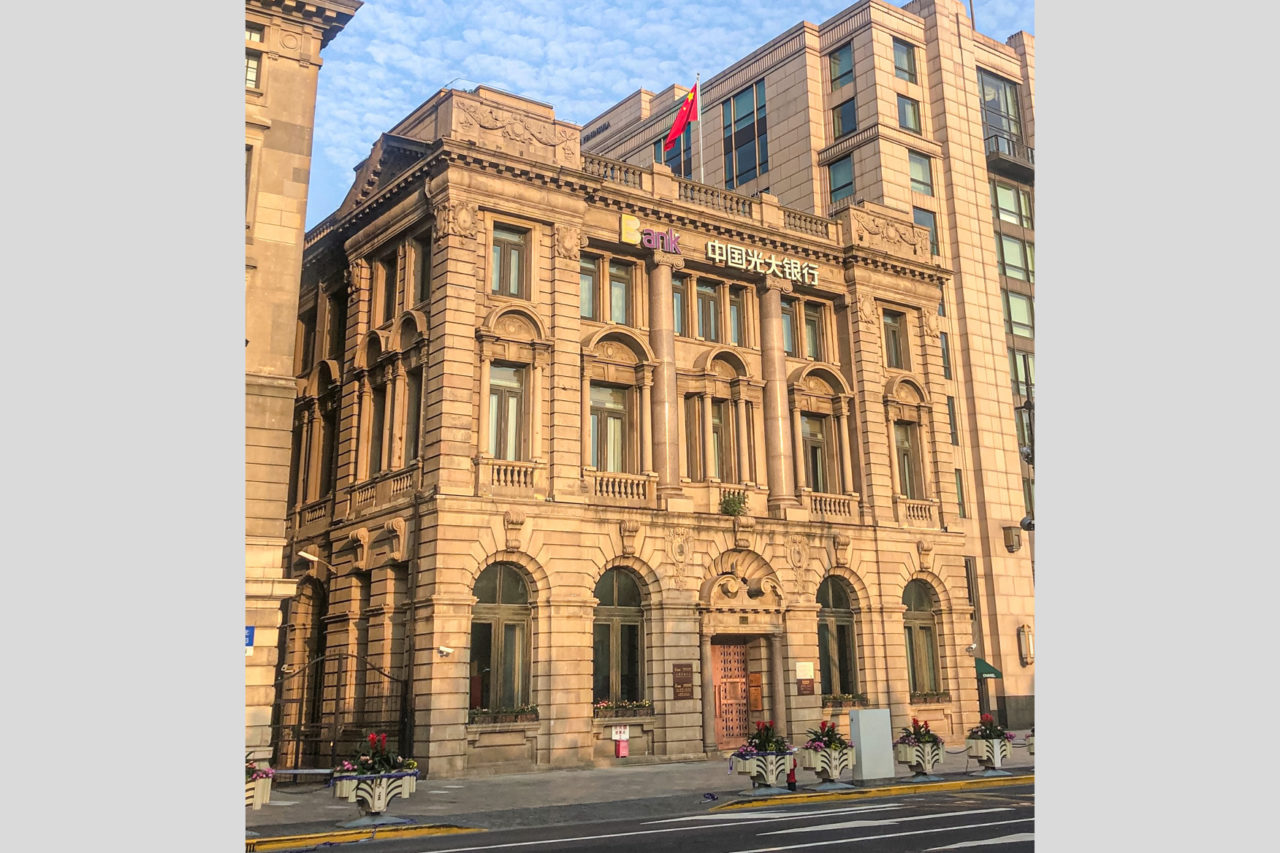 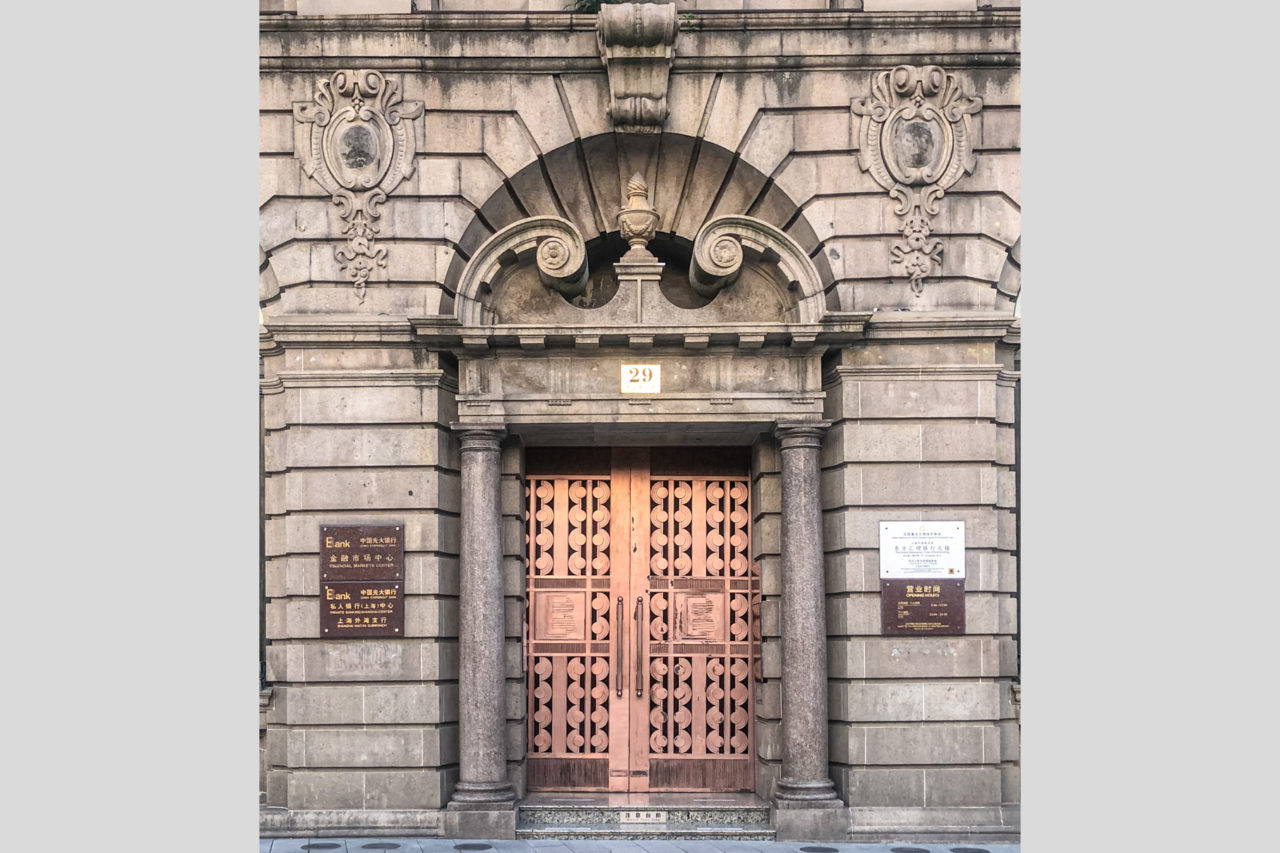 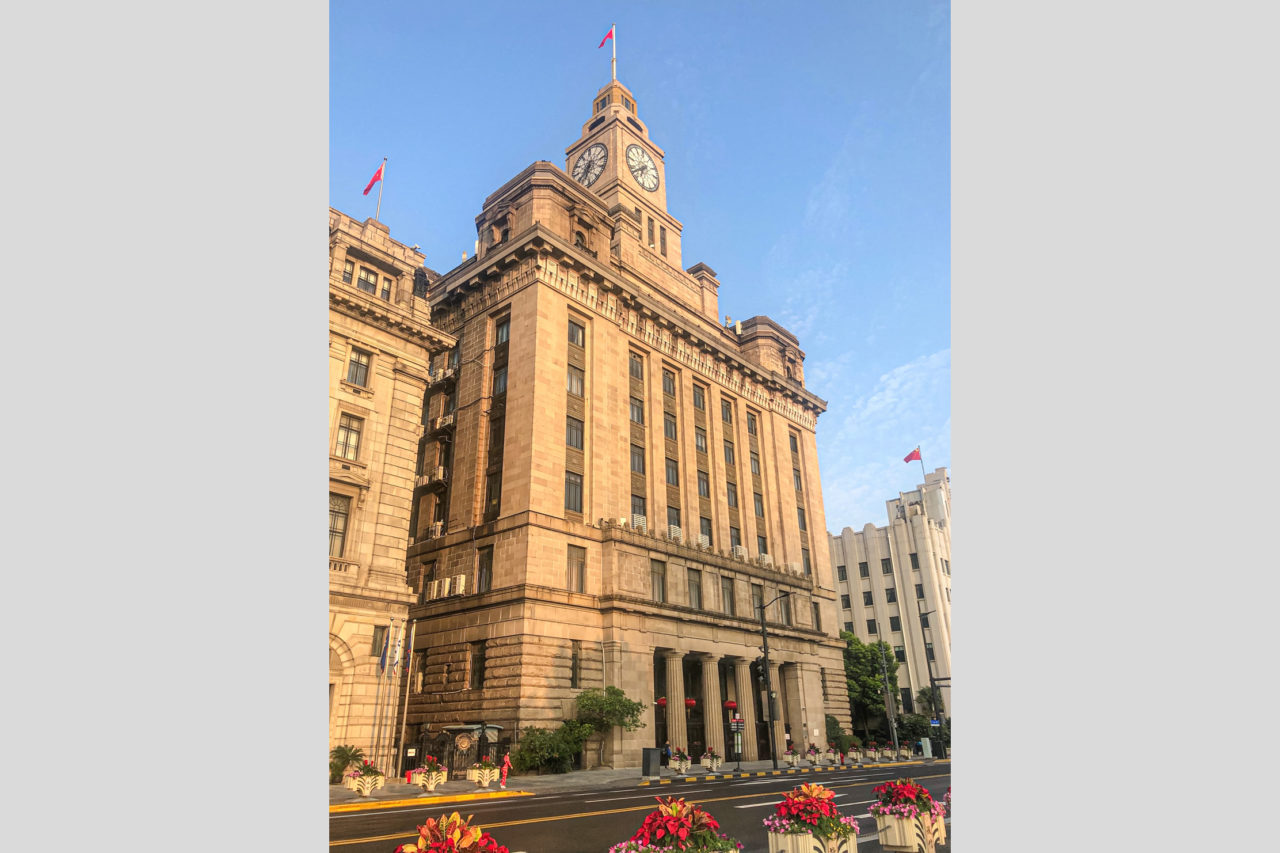 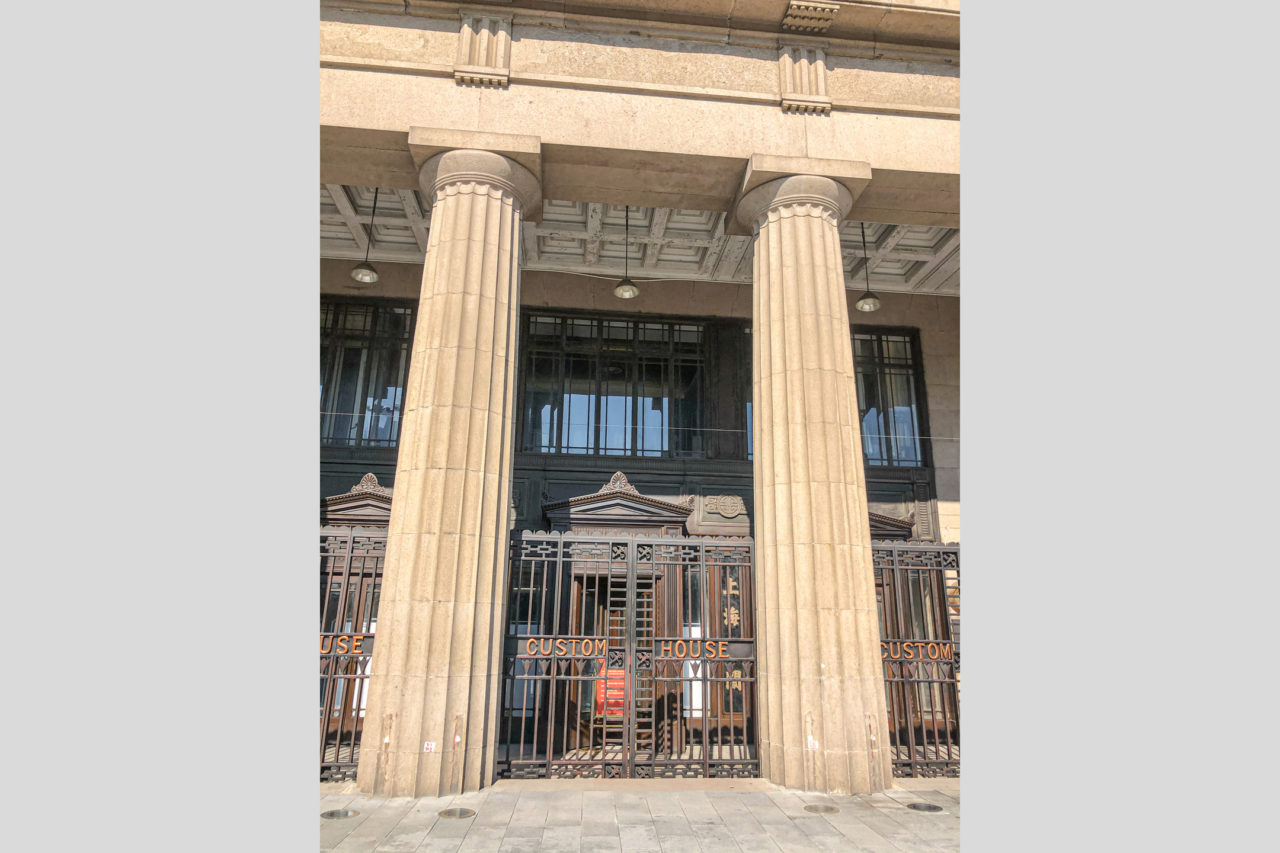 No. 29, The Banque De L'Indochine Building

The gate of the Banque De L'Indochine Building

The Palace Hotel or the No.19 Bund was rebuilt in 1906 and is a masterpiece of Renaissance architecture of The Bund. Although the main facade faces Nanjing Road, the East façade of the Palace Hotel contributes its brightest colors to The Bund. The windows, which are of different sizes and pediments, are one of the main decorative elements of the building.

The Banque de l'Indochine Building or the No. 29 Bund incorporates both Renaissance and Baroque architectural features. It was designed by Atkinson & Dallas in an Italian Renaissance style. The layout of the facade follows the classical tripartite design principle. The arched gate, one of the most beautiful gates in The Bund, is of Baroque style and displays a trophy centered on a broken pediment. Ornamental cartouches in different patterns are also another remarkable feature of the building.

The classical elements are also found in Eclecticism architecture of The Bund. For example, the main entrance of the Custom House or the No.13 Bund contains four huge Greek-Doric columns, a perfect imitation of columns of the Parthenon. 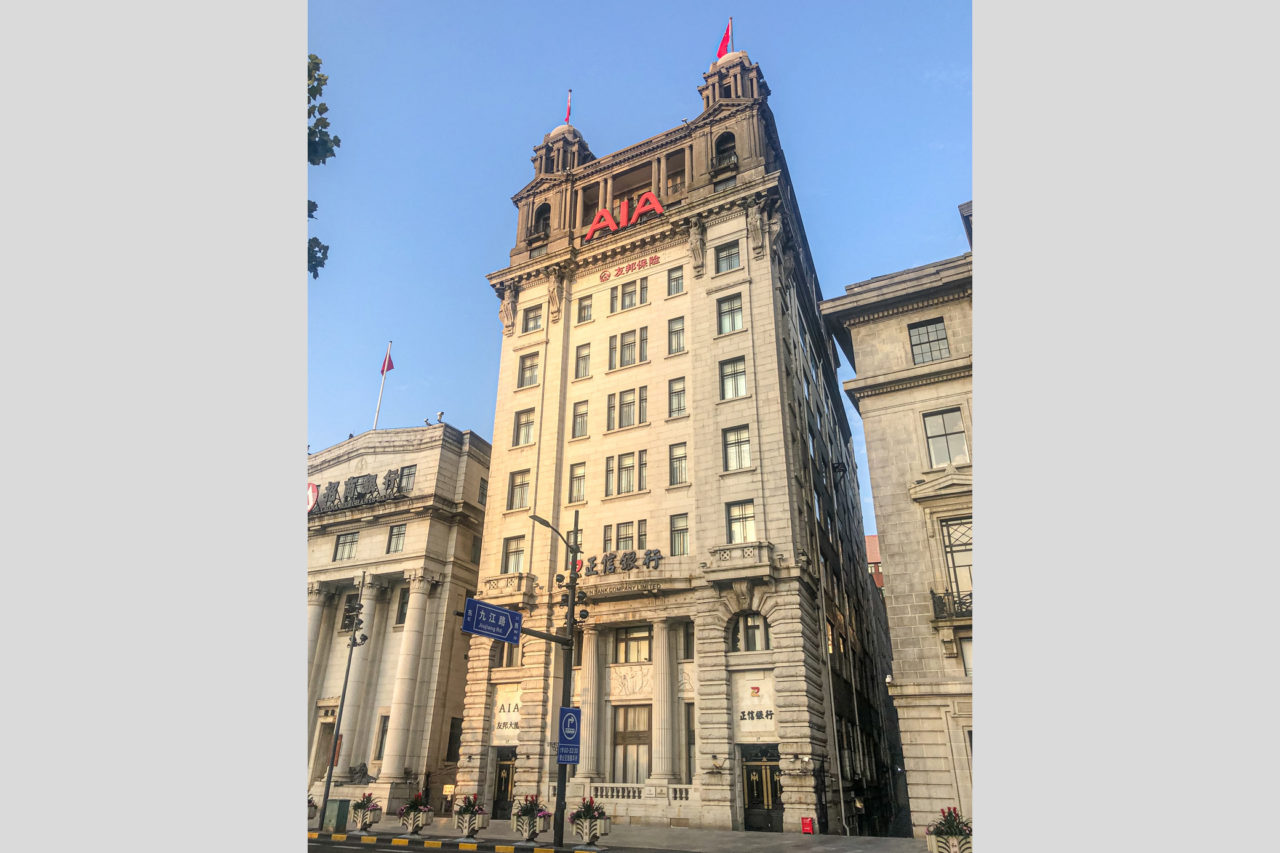 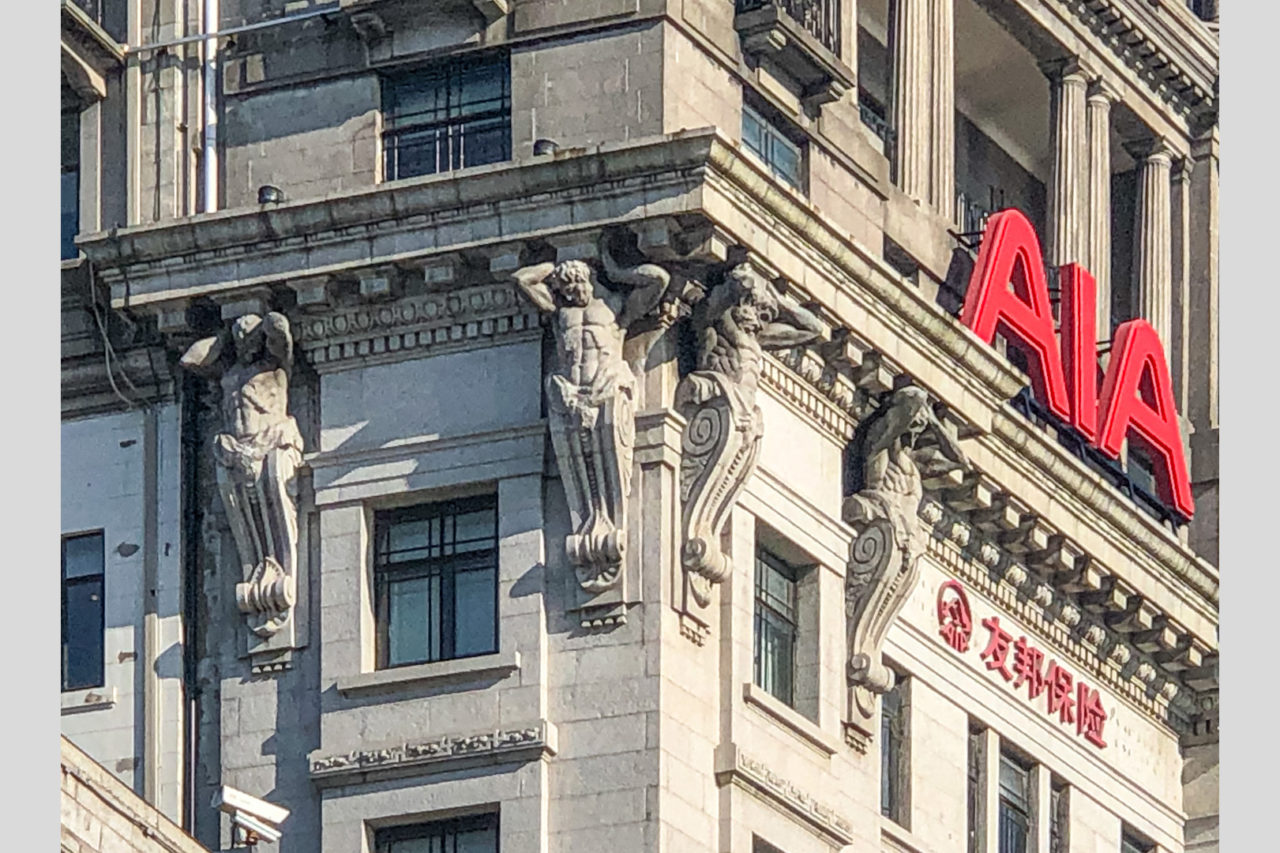 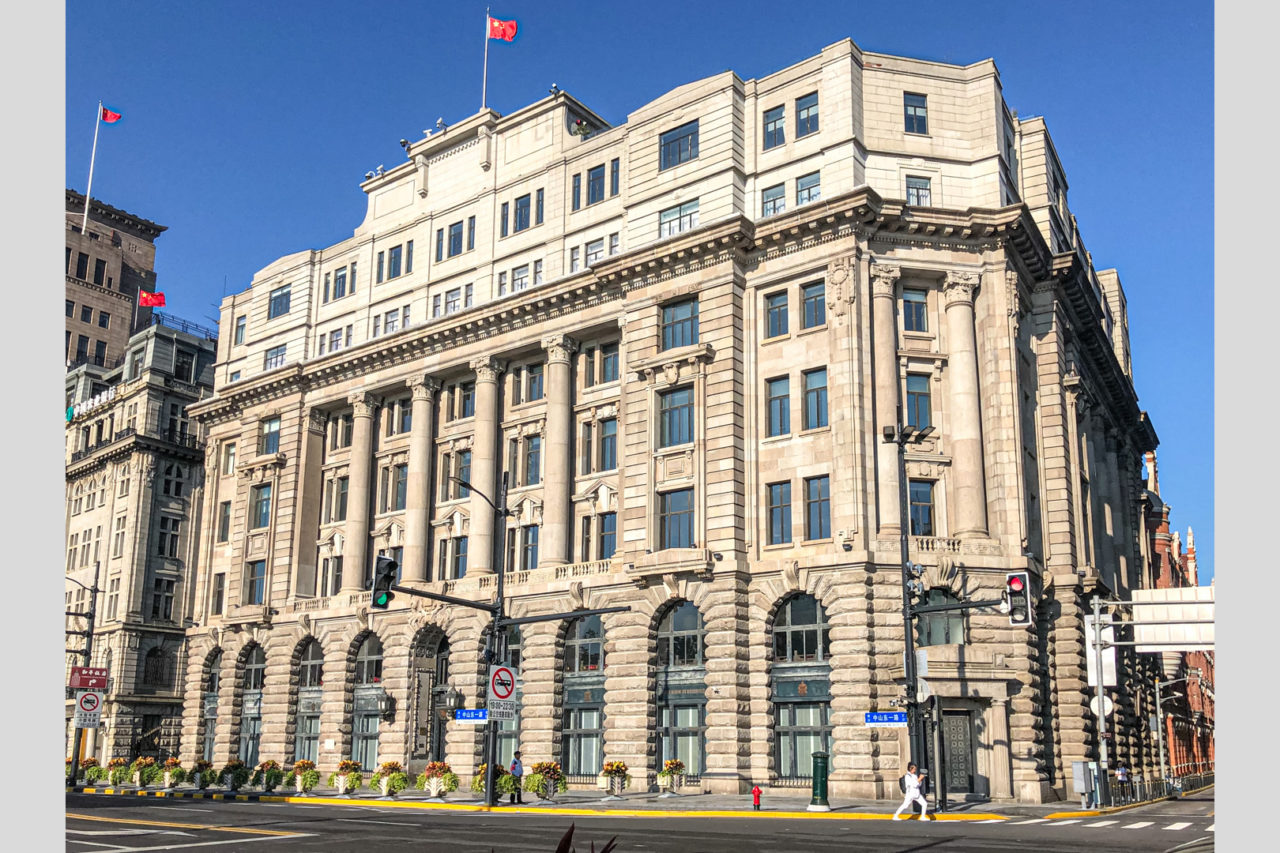 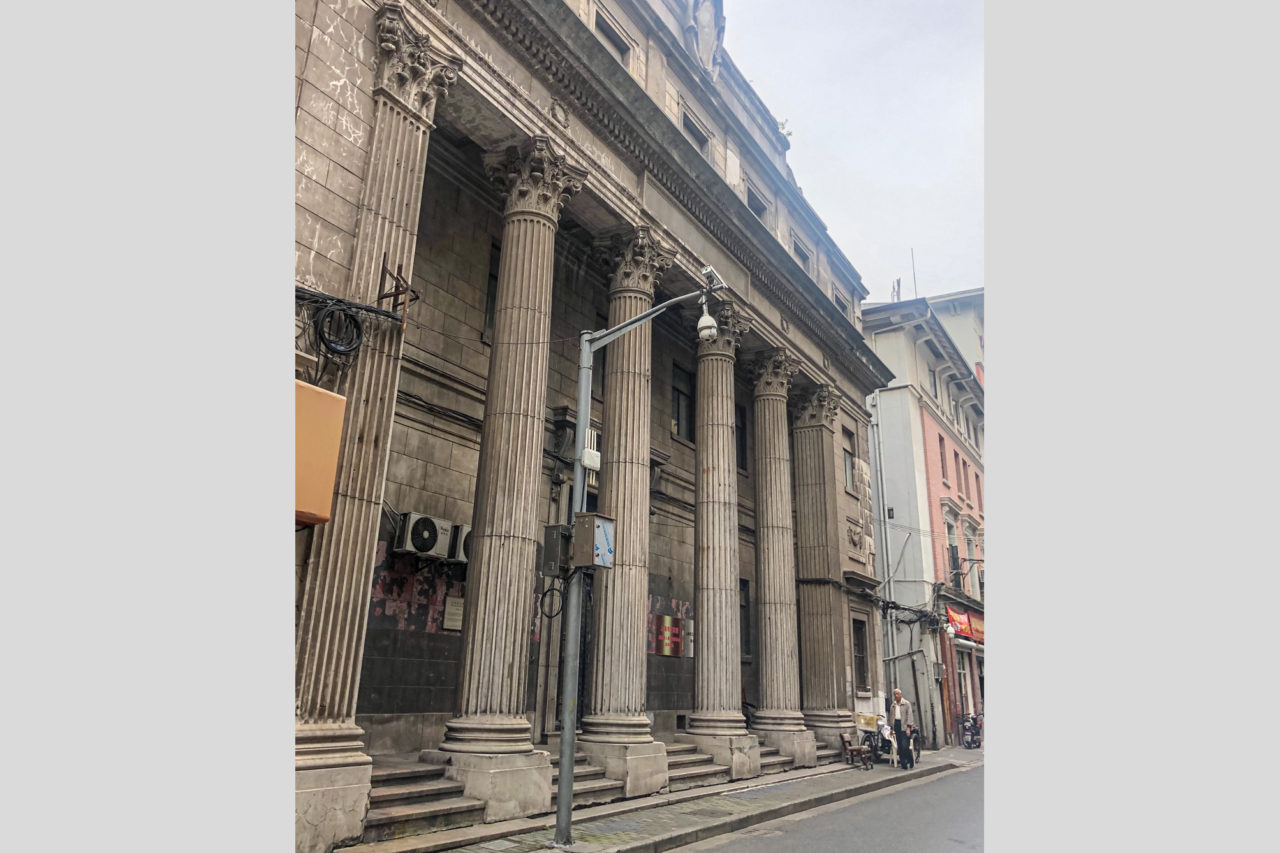 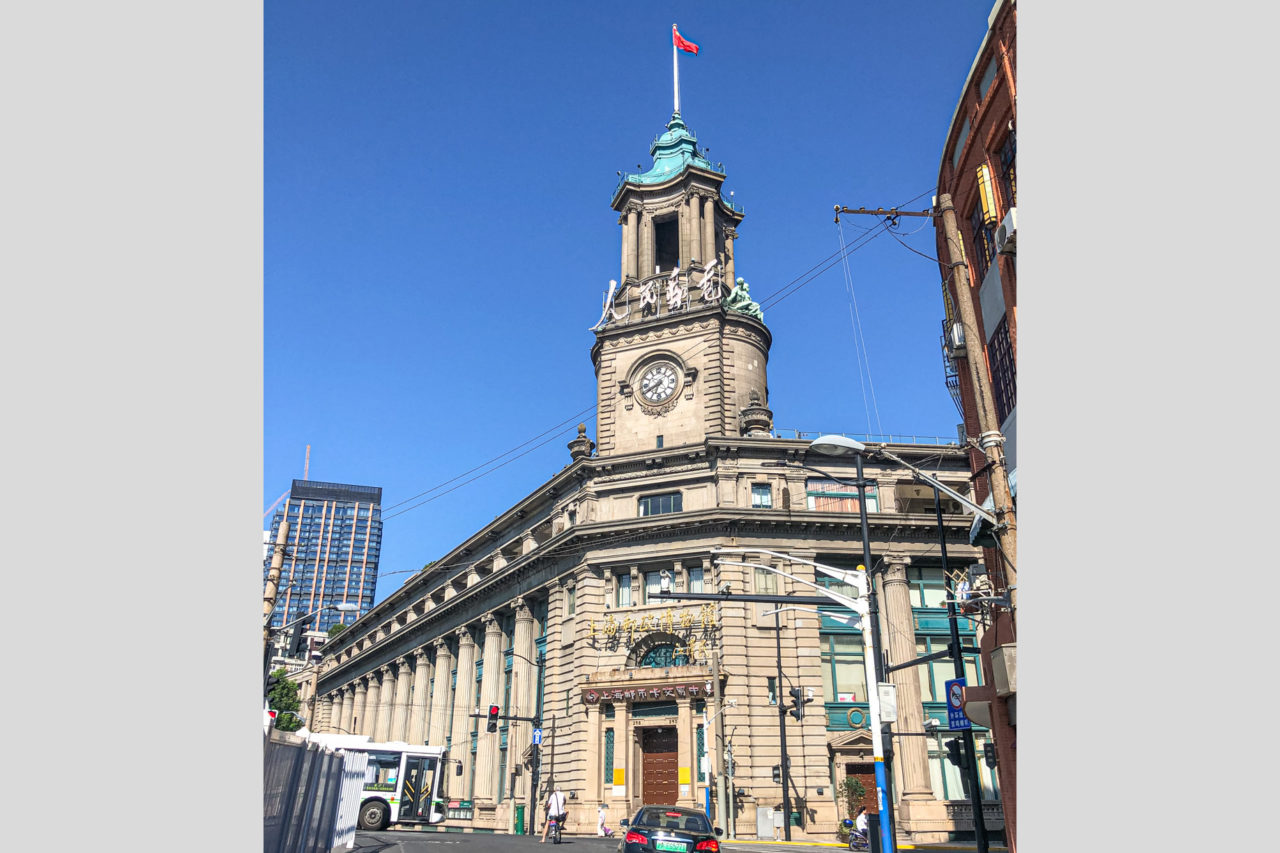 No. 17, The North China News Building

No. 27, The Jardine Matheson Building

The Portico Of The Chinese Banking Association Building

The North China Daily News Building or the No.17 Bund was the tallest building when it was completed in 1924. The building has an impressive upper section with two Baroque cupolas and two aedicule windows connected by a Doric portico. Eight Atlantes support the taller entablature to balance the heavy upper section.

Most buildings of The Bund are rusticated in their lower sections. The huge masonry arch bays of the Jardine Matheson Building or the No. 27 are the most impressive ones of The Bund. Unfortunately, two floors of office space were added to the building in 1982 giving it an awkward look.

Interestingly, there are no huge Corinthian orders in the first row of buildings of The Bund. In fact, the most beautiful Corinthian capitals of Shanghai are just a few blocks away. The Chinese Banking Association Building , 159 Hang Hong Road, has a portico with Corinthian columns which are the exact same as the interior columns of the Pantheon. However, the building is not as well preserved as those facing the Huangpu River.

Another gorgeous building near The Bund is the General Post Office Building with an Eclecticism style. It has the longest classical facade and portico of not only Shanghai but throughout China. Today the main part of the building features the Shanghai Post Museum. 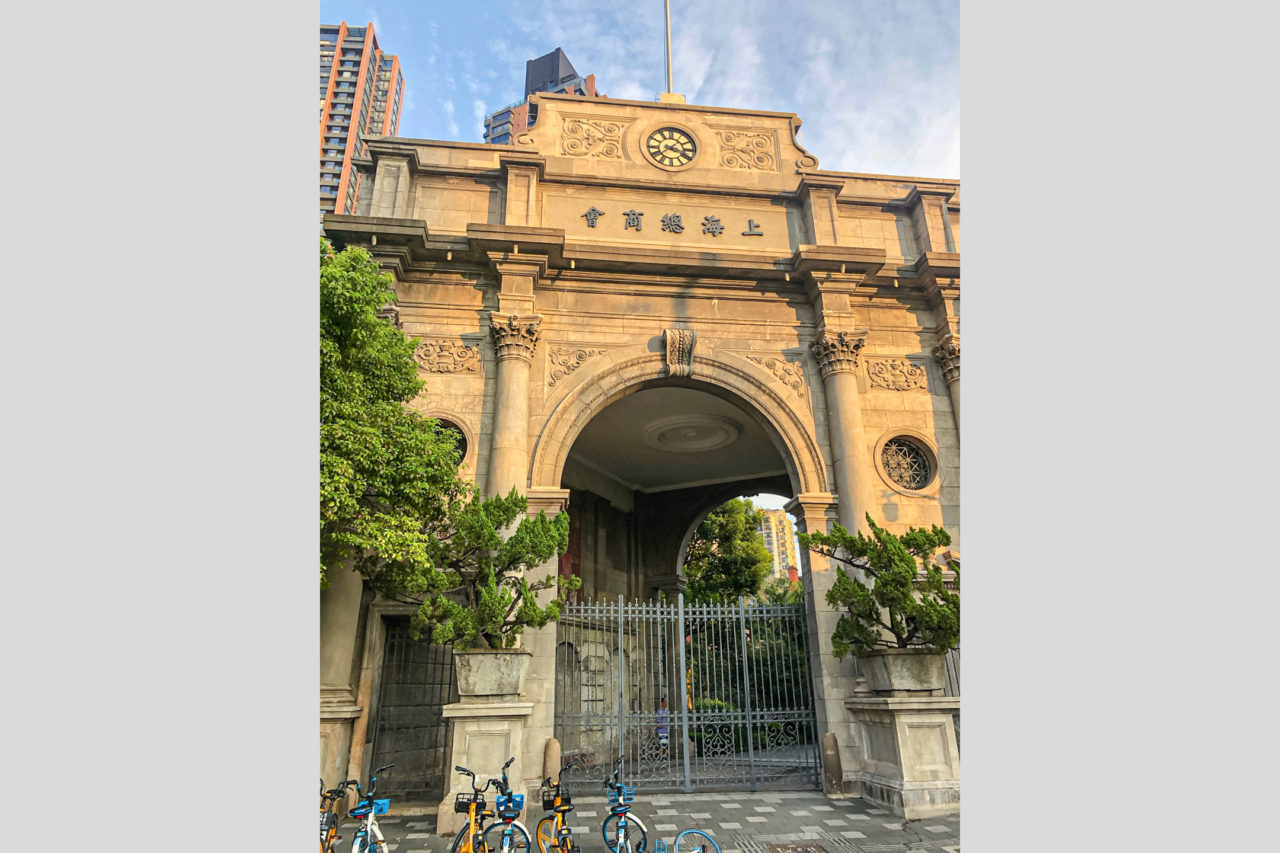 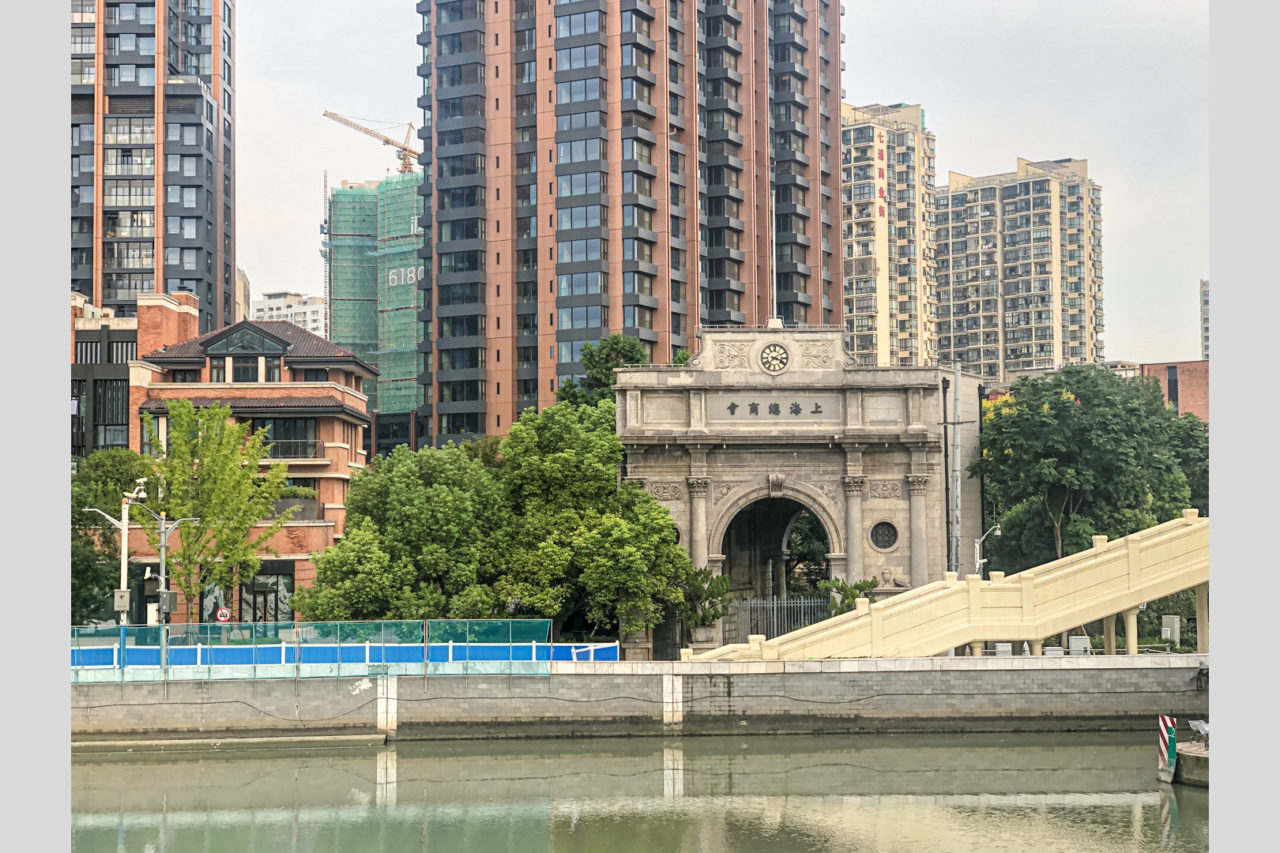 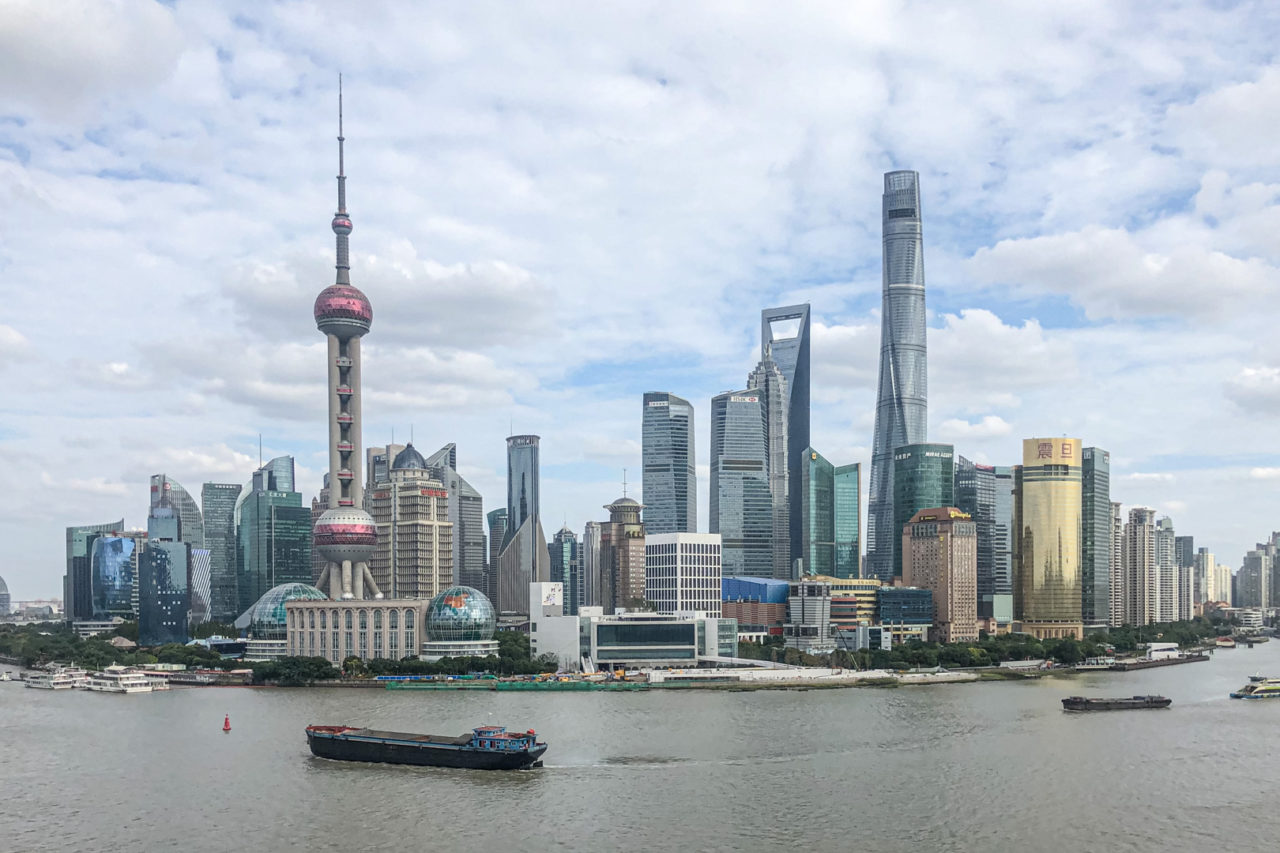 The gatehouse of the Shanghai General Chamber of Commerce

The gatehouse of the Shanghai General Chamber of Commerce

The last piece of classical architecture I want to feature in this article is the gatehouse of the yard of the Shanghai General Chamber of Commerce. The facade of the building is a triumphal arch. The central arch is flanked by Corinthian columns with Greek-style capitals. The triumphal arch faces the Suzhou Creek, a once busy commercial waterway. Today, the beautiful gatehouse resides in a cluster of modern buildings.

The Classical and the Modern buildings of The Bund are both a combination of the East and the West as well as a fantastic destination for scholars and students of architecture to visit. This article is by no means a definitive list of all the great Classical buildings of The Bund or Shanghai. In fact, many more buildings and myriad experiences await you.

The Shanghai Study Group of Classical Architecture is a newly formed educational organization founded by Quan Zhai, an enthusiast of Architecture. The Group holds field trips and does research on the historic buildings of Shanghai. The objective of the group is to allow people of all ages to develop basic understanding of classical architecture and gain the ability to appreciate its beauty. As the founder, I sincerely invite scholars and members of the ICAA to join this program and become our advisers. Contact Email: [email protected]

In Your Neighborhood: Commonwealth Avenue, Boston, with Patrick Ahearn | Part I

In Your Neighborhood: Pasadena City Hall with Christian Arndt

In Your Neighborhood: Commonwealth Avenue, Boston, with Patrick Ahearn | Part I

In Your Neighborhood: Pasadena City Hall with Christian Arndt