The ICAA is pleased to partner with Classical Excursions to present this tour of the hidden gems of Naples and the Amalfi Coast.

Participants will enjoy a welcome dinner on the beautiful rooftop of the Grand Hotel Vesuvio, which features incredible views.

The tour includes a visit to the Royal Palace at Caserta, which was constructed under the reign of Charles VII of Naples, beginning in 1752. It was designed by architect Luigi Vanvitelli in the Baroque style. The palace, which is to the north of Naples, is the largest of all European palaces with 1,200 rooms and numerous fireplaces spread over its five floors. The grand vista, with its cascades and fountains, covers 296 acres and was designed in the 1780’s by Carlo Vanvitelli.

This tour includes a special visit to the Royal Silk Factory at San Leucio, known for its world famous Neapolitan silks, and dates back to the 18th century.

Participants will enjoy a tour of the Grand Palaces at Capodimonte. Originally conceived as a hunting lodge in 1738 for Charles VII, it grew into the grand building we see today. With the end of of the Italian monarchy, it became a national museum opening in 1957.

The Capodimonte Museum houses an impressive collection of paintings, decorative arts, and ancient Roman sculptures, with an array of major works dating from the 13th to the 18th century, by Caravaggio, Raphael, Titian, El Greco, Giovanni Bellini, Simone Martini, Masaccio, Giorgio Vasari, and many more.

This program features a visit to the Santa Chiara religious complex, which includes the Basilica Church and convent. The monastic complex was built between 1313 and 1340, and features a unique cloister with wall surfaces and columns covered by majolica tiles in colorful floral design patterns which were added in 1742.

Across from the Santa Chiara is the church of Gesù Nuovo, where participants will tour the church, which was constructed in 1584. It retains its unique façade, which is faced with rustic ashlar diamond projections and was originally built for a palace in 1470 for the Prince of Salerno.

Participants will have the chance to walk the Via San Gregorio Armeno, where shop after shop line this alley and feature famous carved figures, animal, nativity scenes, and more beautiful displays.

The tour includes a private visit to the Chapel of Sansevero. One of Naples' more dramatic interiors, it contains Baroque sculptures including the Veiled Christ in marble, completed in 1753 by Giuseppe Sanmartino.

The program features a visit to the Pio Monte della Misericordia, dating to 1606 and houses Caravaggio's Seven Works of Mercy at the high alter.

The program will include a tour of the Duomo di Napoli, also known as the Cathedral of the Assumption of Mary, and dates back the the 13th century.

The tour will feature a visit to the Certosa di San Martino, a former monastery complex in the high hills overlooking Naples.

Participants will enjoy at private dinner in the Scavi di San Lorenzo.

The tour will include an excursion to the area around Posillipo, to the west of the city, which features sweeping views back to the city of Naples and Mount Vesuvius.

This program will include a unique tour of the Grotta di Seiano, the Cave of Sejanus.

Participants will enjoy a private visit to the Villa Trentaremi, which was completed in 1954 by architect Massimo Nunziata for an English Ambassador. The house is three levels and was built into the hillside with a central atrium to access the various levels. Gardens and trees keep the property completely private with special views created to enjoy the sea and distant shores

Participants will travel to the Island of Capri by boat to the Marina Grande, where they will visit then the Villa Lysis, was built in 1905 for an industrialist and poet and has breathtaking views.

The tour features a visit to the Giardini di Augusto (Gardens of Augustus) which is perched on a promontory overlooking the sea.

Participants will enjoy a scenic boat ride to Amalfi, where they will take in the dramatic coastline and beautiful hillside towns.

This program includes a trip along the coast Paestum, the site of three preserved Greek temple structures dating pack to approximately 450, dedicated to Hera, the Queen of the Gods. Other intact aspects of the ancient city include city walls, paved roads, and the amphitheater.

The tour features a visit to The National Archeological Museum in Paestum, where participants will have the opportunity to see painted tomb paintings, sculptures, terracotta works and more. One of the most famous works at the museum is a ceiling painting of the Tomb of the Diver, dating back to 470 BC.

Participants will enjoy lunch and a unique visit to a Mozzarella Facility to see the fascinating process of making one of the world’s most popular cheeses – famously used for Caprese Salad, pizza, and more.

The tour will include a visit to the Villa Rufolo in the stunning coastal town of Ravello. The Villa dates back to the 13th century. One of the prominent owners of the Villa were Sir Francis Neville Reid, a Scottish botanist who purchased it in 1851 and created the beautiful gardens; later, German composer, Richard Wagner spent time at the Villa in 1880’s and worked to complete one of his operas.

Participants will enjoy an al fresco lunch and visit to the gardens at the Villa Cimbrone, which dates back to the 11th century.

The tour features a private boat tour to the town of Positano.

Participants will enjoy a farewell dinner at the Villa Caruso, now a Belmond luxury hotel.

Days
7
From
$9,450
Step one
Email to Register
Step two
Donate to ICAA 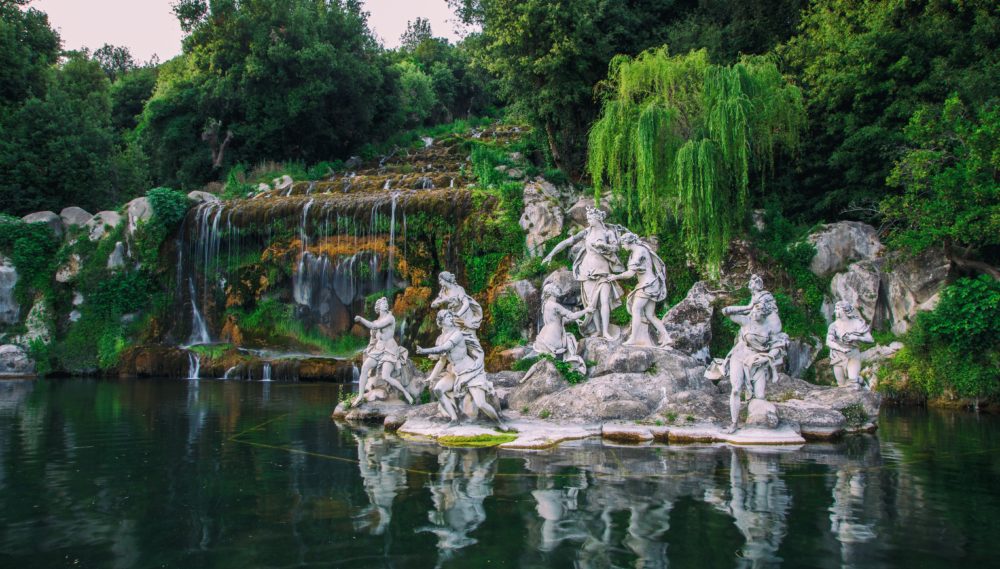 Fountain at the Royal Palace at Caserta 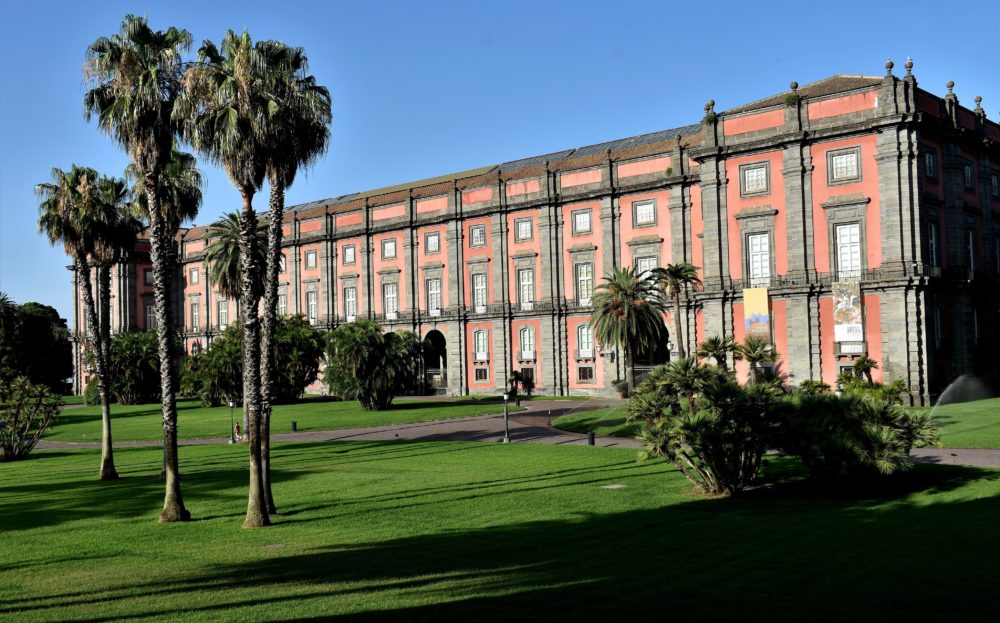 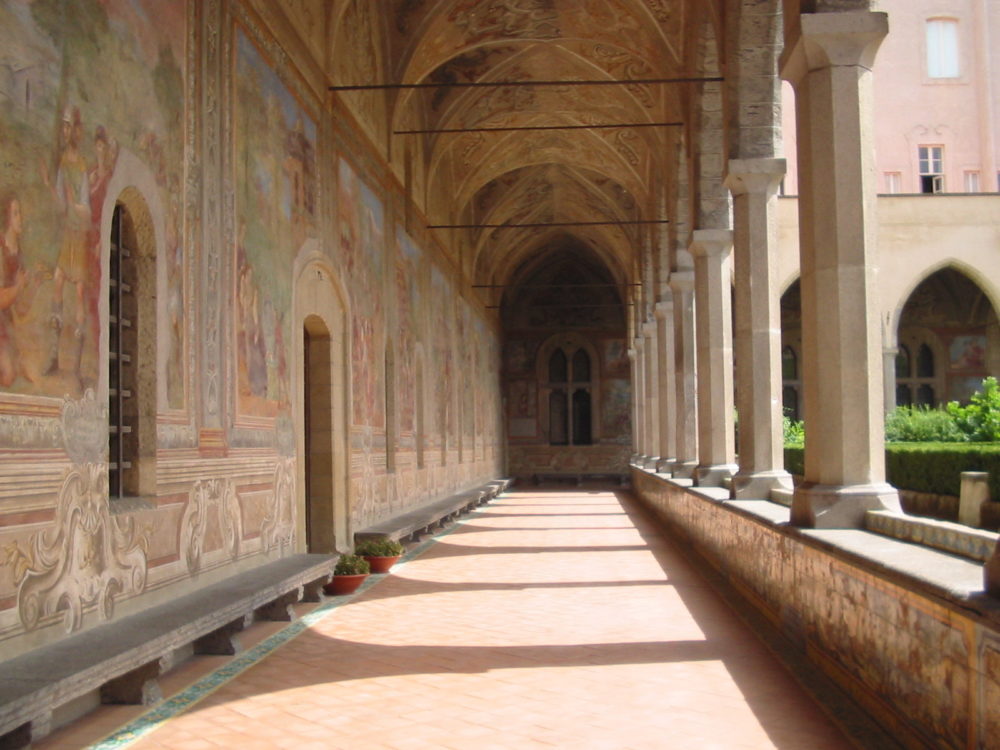 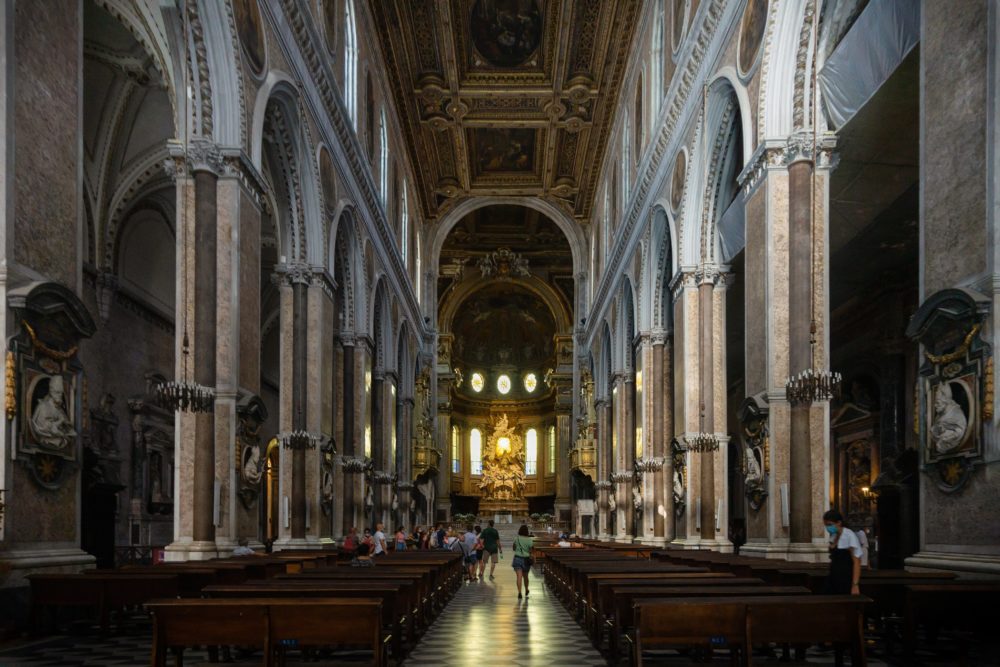 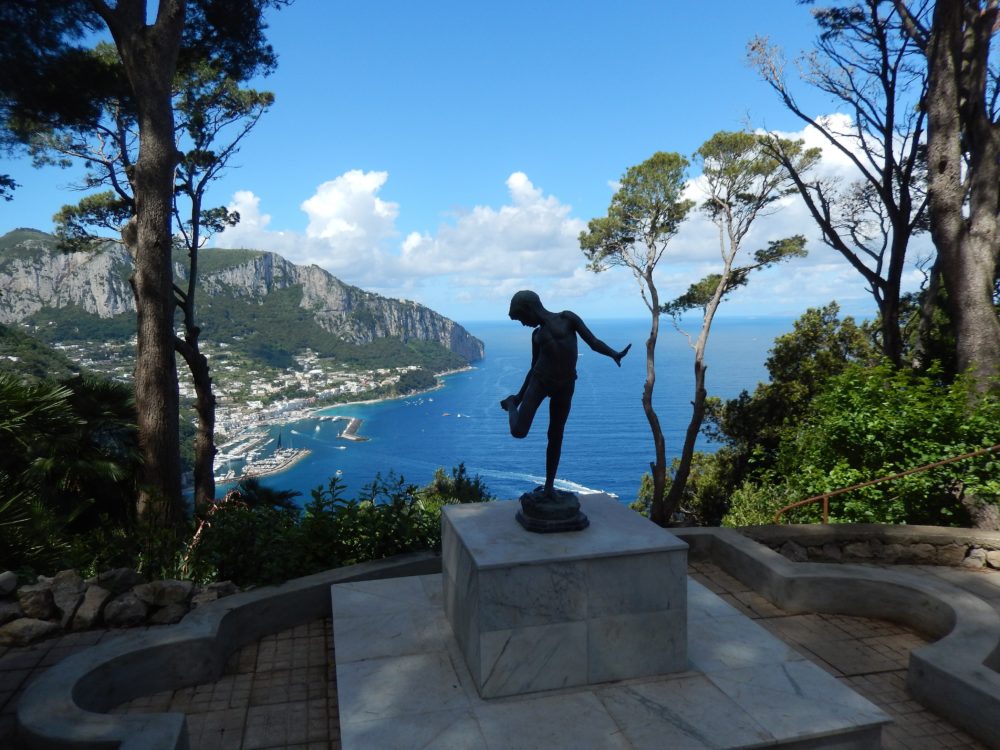 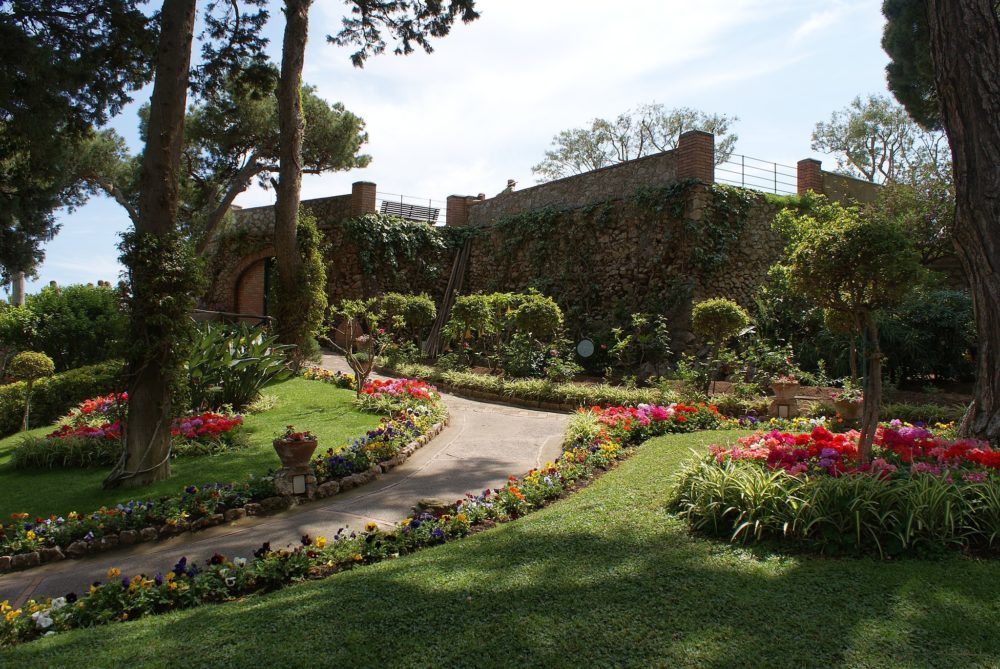 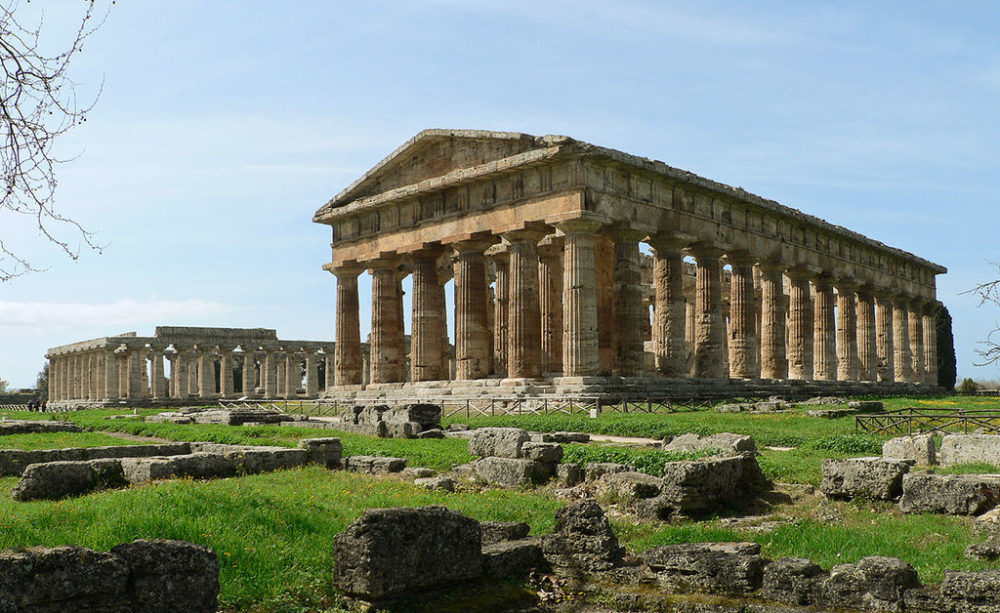 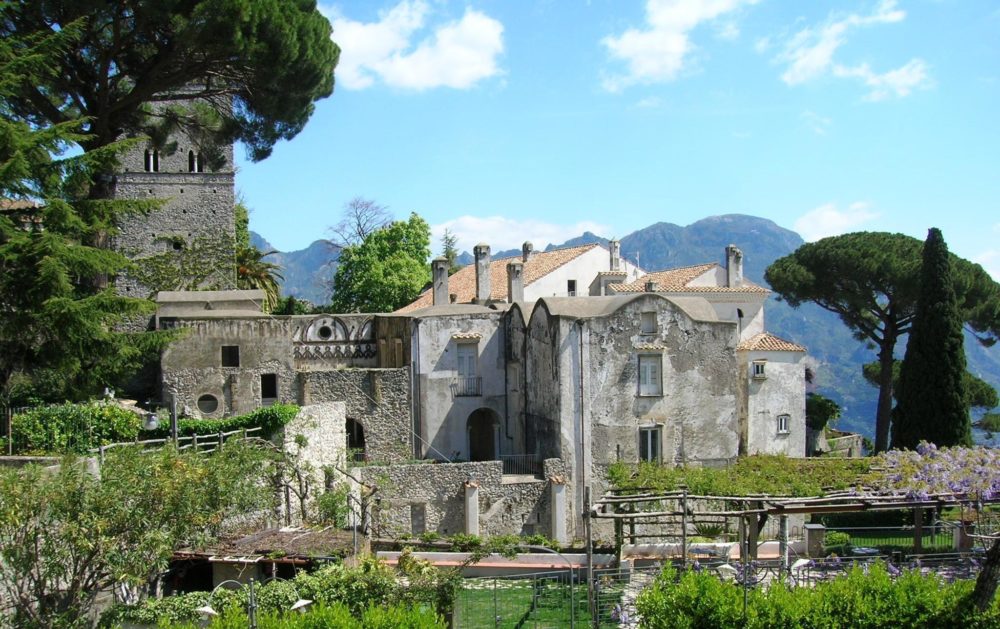