Skyscrapers Threaten the Horizon of Paris

Along with Rome and Washington, D.C., Paris is one of the few remaining mid-rise world capitals. Offering glorious walks along the quais beside the Seine, with the Cathedral of Notre Dame ahead and the low Paris horizon beyond, Paris is also the world’s most-visited city, with some 28 million visitors a year.

With the blessing of the Mayor and the Paris City Council, however, developers are poised to attack Paris from within. In July of 2008, the City Council decreed that six skyscraper projects of up to 50 stories should be built at the city's gates. Now is the time for world opinion, Parisians themselves, UNESCO and the World Monuments Fund, to raise an outcry so loud that it stays the backhoes.

The same corrupting brew of avarice, political ambition, and architectural theory that menaces the skylines of other cities today also threatens the beauty and livability of the City of Light. As elsewhere, politicians and developers in Paris argue against height limits by holding up the plight of poorly housed low-income families. That argument, however, turns out to be a smokescreen.

Paris has had height limits for hundreds of years. When new zoning laws relaxed those limits in the 1960s, the grotesque results provoked such outrage that Parisians re-imposed limits in 1977. The Tour Montparnasse, at 51 stories, built in 1973, and visible like a giant thorn from everywhere in Paris, is universally hated. After 1977, heights in the central city could go only to 31 meters (roughly102 feet or 10 stories), and on the periphery to 37 meters (roughly 121 feet, or about 12 stories). That law saved the Paris skyline for more than 30 years.

In 2008, however, having sufficiently bested the anti-tower Green Party at the polls, the Socialist City Council lost no time in authorizing tower projects. It set a new limit for lodgings on the periphery of 50 meters (about 164 feet or 15 to 16 stories), while new office towers could reach 200 meters (50 stories). Au revoir to the traditional low horizon of Paris. 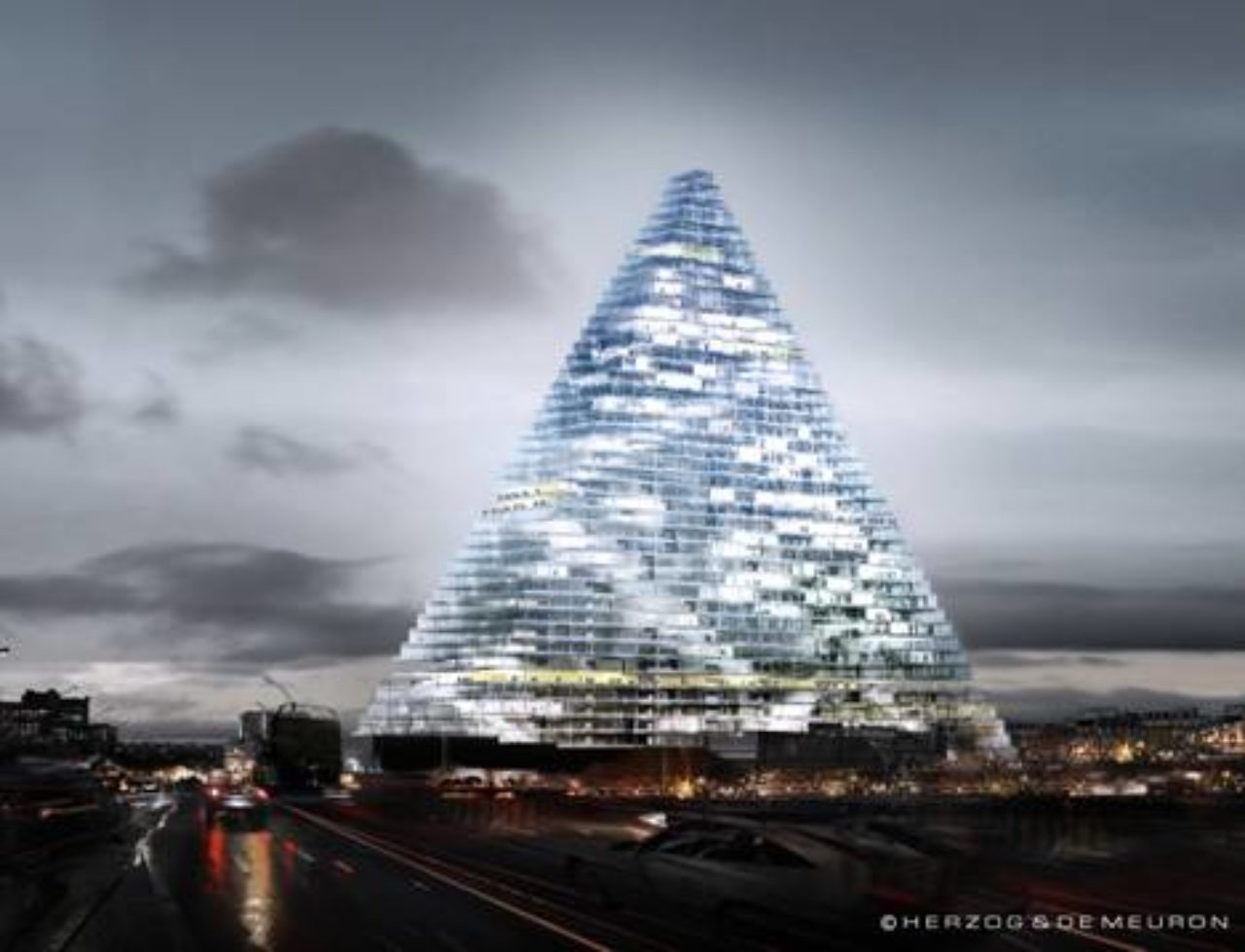 Mayor Delanoë argued that building towers would help young families with children afford to live in Paris and, but only secondarily, that it would provide office space for corporations. Talk about sentimental appeal! France does indeed have a housing crisis. Government agencies say that ten per cent of the population of 65 million is either without shelter or badly housed. In 2009, an advocacy group staged a brilliantly telegenic sleep-in, with orange tents sheltering homeless people along the Canal St. Martin in eastern Paris glowing brightly in every French living room on the 8pm News. Entire families now live in tiny rooms under the eaves of Paris buildings or crowded into firetrap tenements. Many middle-class families can’t afford Paris rents. The Mayor's stated goal is 70,000 new units a year. No one can resist the appeal of providing housing for young families with children.

In fact, however, of the three tower projects the City Council of Paris has approved so far, not one provides housing in a 50-story tower for young families. The first skyscraper, an in-your-face glass pyramid designed by Pritzker Prize-winners Herzog & de Meuron, will rise above the low exhibition halls at the Porte de Versailles in the 15th arrondissement, towering over the six-and eight-story buildings of Paris, smack in the line of sight of the Eiffel Tower. Vociferous opposition has come from an organization of local associations called the Collectif contre La Tour Triangle. Whether the Tour Triangle will provide a public benefit has been the subject of an official inquiry. Its financing has been attacked by Le Canard Enchainé, a newspaper. After first being slated for offices, however, this tower is to be a hotel, not housing. 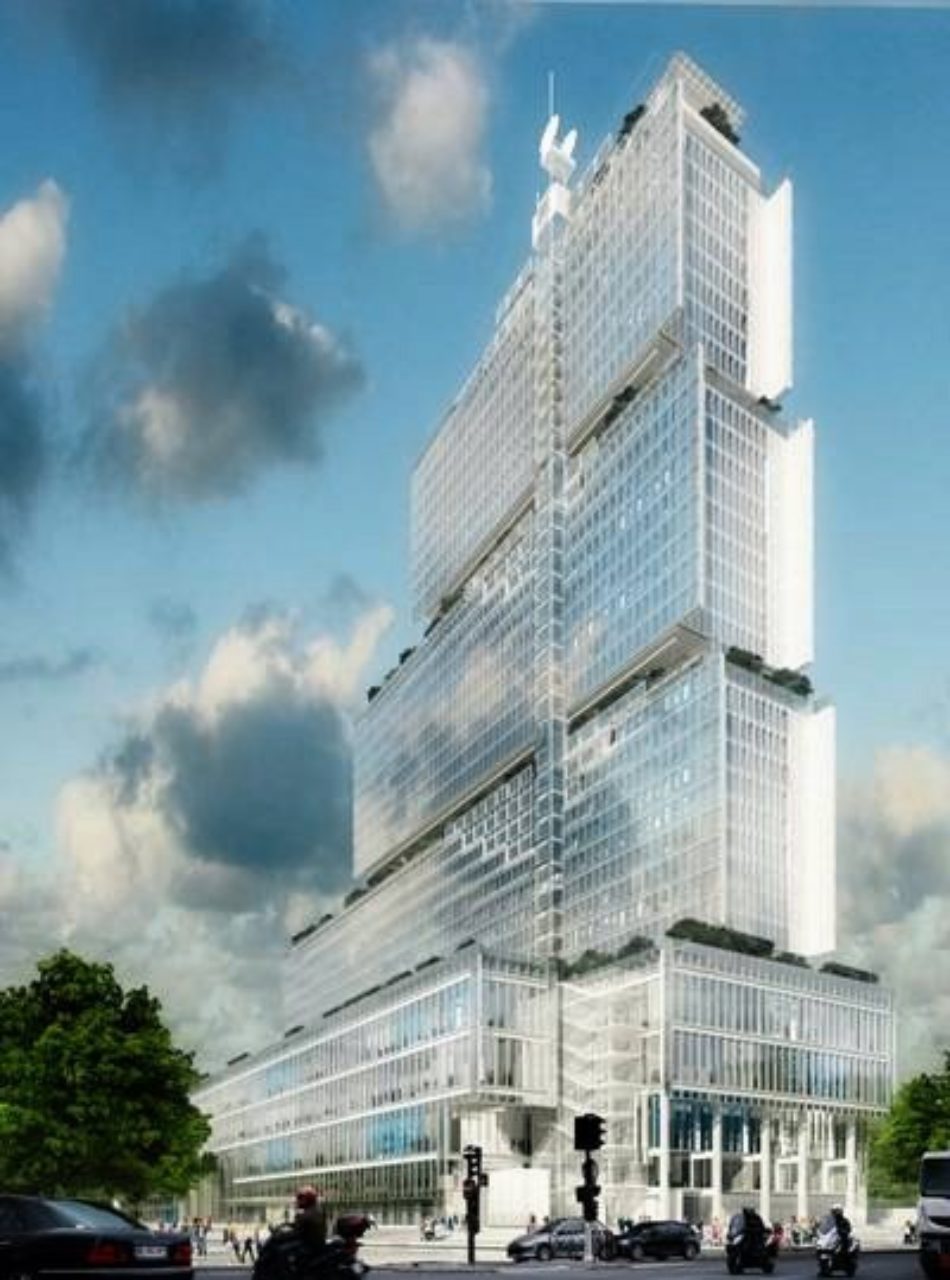 The second and third developments will go up on the last large tracts of undeveloped land in Paris, remnants of its nineteenth-century growth in industrial power. Out at Clichy-Batignolles in the 17th arrondissement, the government is building apartments and offices on the vast railyards that back up the Gare Saint Lazare. According to plans, at the far western end, next to the ring road, the Périphérique, will stand Renzo Piano's four-layered skyscraper, visible from central Paris. It will house courts of law for the national government inside glass walls. But no young families. Some of the lawyers who would have to relocate from the Palais de Justice on the Île de la Cité have in fact brought suit protesting transfer into what they allege is an extravagantly expensive new building on the edge of Paris, when, as they say, the budget for the judiciary is already overstretched and more convenient and less expensive alternatives exist. Apartment buildings in the Clichy-Batignolles development reach 14 stories, as now permitted, higher than in Haussmannian Paris, nor are they on the boxy Haussmannian model, tightly lined up along the streets, but they are instead irregularly shaped structures with spaces between them. The overall plan is reminiscent of a suburban corporate campus. 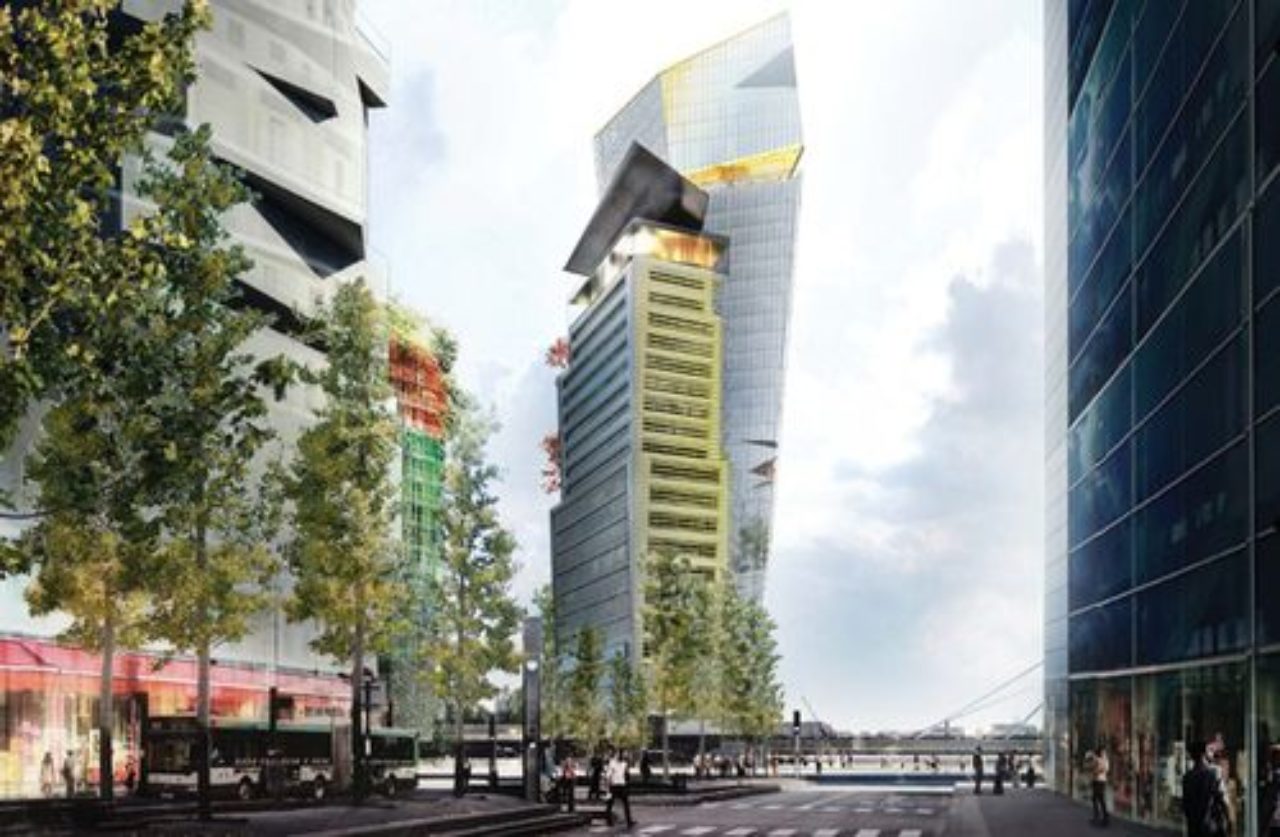 The third location is in the 13th arrondissement on the opposite side of Paris, a formerly industrial area now dubbed Paris Rive Gauche that includes the new Bibliothèque Nationale de France. It is being cut into chilly post-Bauhaus neighborhoods. No family takes a Sunday afternoon stroll along its frigid main drag, the concrete, glass, and steel-bordered Avenue de France. The architect Jean Nouvel has just unveiled the design of his "Duo," two 50-story towers to be built speculatively there, to hold offices and perhaps a hotel. And as in the 17th, apartment buildings in the 13th will not only violate the traditional height limits of Paris, they will be separated from each other, rather than being built in the tightly-knit Haussmannian pattern that supports the boutiques, cafés, and street life that help make Paris unique.

Lawsuits are either ongoing or threatened, and all three projects have elicited protests. In addition, the architectural preservationist organization SOS Paris has appealed to UNESCO to consider expelling Paris from its World Heritage list if plans for towers go forward. The towers will be visible from the center of Paris, spoiling the background for the UNESCO-protected World Heritage site along the Banks of the Seine. SOS Paris has also appealed to the World Monuments Fund to add the skyline of Paris to its biennial Watch List of endangered cultural heritage.

Why is the City of Paris not planning housing in these 50-story towers for young families? Because no government with its eye on expenses is going to build high-rise towers for middle- and lower-income housing. High-rise housing may work in luxury purlieus where tenants can afford penthouses, but in no way is it economical. The cost of building rises sharply above the sixth floor and it jumps again above 20 stories. Taller structures need heavy lateral support and expensive fire protection. And in any high-rise, larger proportions of the floor space must be given over to stairways and elevators, not income-producing apartments.

In addition, high-rise housing of the style planners in Paris now demand, i.e., "towers-in-the-park," yields less density than the old Haussmannian way of building compact six and eight-story blocks. In fact, traditional Paris is already one of the densest cities in the world, more than four times denser than London, denser even than Mumbai. Paris could squeeze in just as many young families or more if it sustained, revived, and advanced its own traditions and used the building patterns that have worked so well there for more than a hundred years. As Deputy Mayor Denis Baupin, a member of the Green Party, says of the towers planned for Paris, "A district with towers is less dense than a Haussmannian district, because each tower has to have space around it."

Again, why then, is the government insisting on building 50-story towers? The Mayor and City Council believe that office towers will attract high tax receipts and rental income from the corporate executives who will have spectacular views of Paris from those 50th-floor offices. First Deputy Mayor Anne Hidalgo says that Paris must join the corporate leagues of Singapore, New York, and London. She and the Mayor think towers are how to get there. Developers argue that without towers Paris will become a "museum" city, like Venice. They may all think it doesn't matter if Paris looks like every other city in the world.

But the economic argument alone does not explain this epic collision of urban planning theories, taking place behind a smokescreen of talk about young families and "density." To throw over the unparalleled success of Haussmannian Paris requires a cataclysmic conversion. If corporate headquarters buildings can be added inside or outside Paris, in La Défense or other suburbs, and can keep Paris competitive with other capitals, why build office towers inside Paris at all? And why build apartment buildings separated from each other, instead of using the traditional Parisian model and simply extending the dense, low, closely-knit, enormously successful, traditional fabric of the city?

Here is where prevailing modernist dogma comes in. It says that each new historical era must exhibit a style peculiar to its own period, "of its time." Most of us think of each place, especially each great city, as unique, in possession of its own character. But according to the modernist dogma, time is more important than place. The period when an architectural style is first used is the time with which it must be identified. Accordingly, the designers and apologists of new developments in Paris strenuously announce their refusal to follow the successful model of the Haussmannian blocks of Paris that they see around them. To do so would be what they call false history and "pastiche." The style of our twenty-first century era is towers, they say, so towers is what Paris must get.

Polls show that the majority of 21st century Parisians do not want towers. The Mayor says he knows about the polls, but he must "do what is right."

Thus, an unholy alliance of developers and politicians hides behind pious talk about young families. Opportunism masquerades as courage. And current architectural theories justify developers in piercing the serene skyline of Paris and cursing that unique European city with buildings suited to Hong Kong.