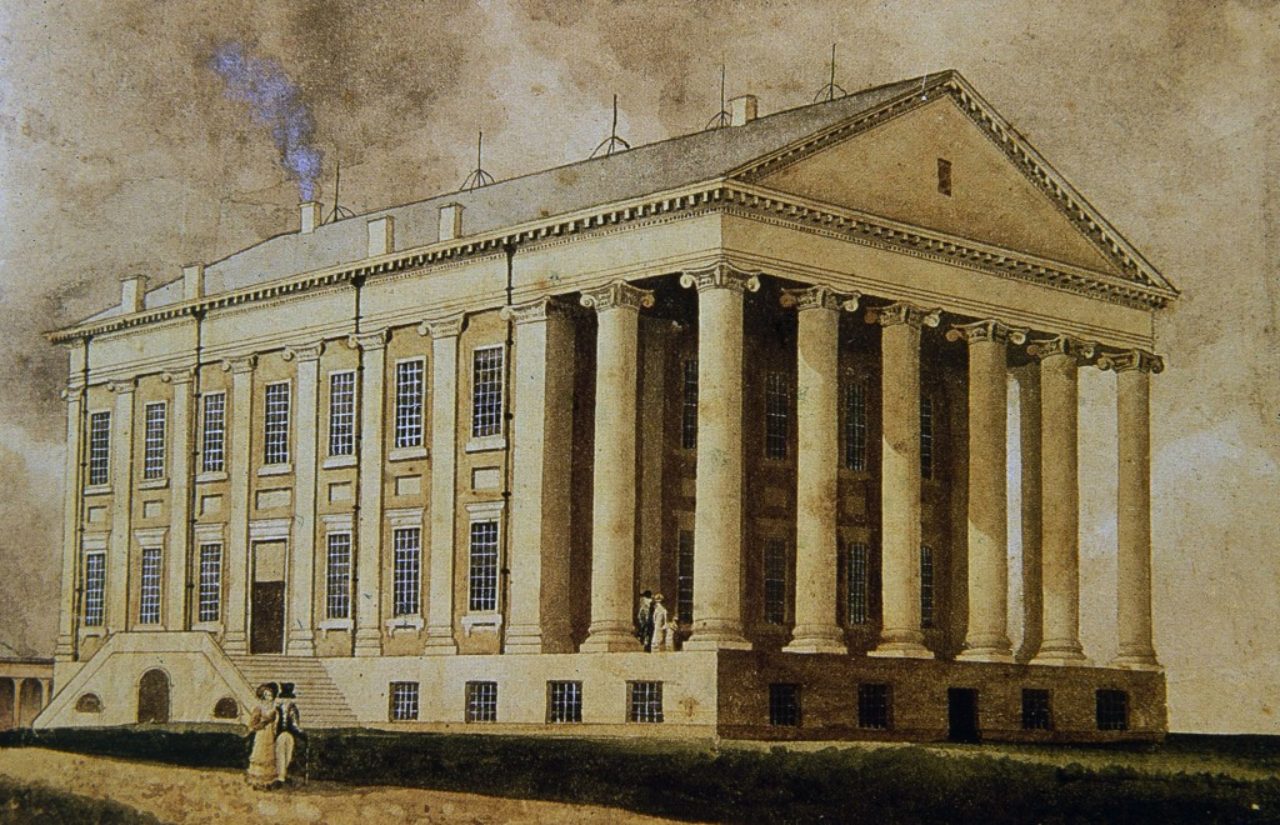 Thomas Jefferson’s ambition to provide the nation with suitable models for public buildings saw its earliest expression in his design for the Virginia State Capitol. (Figure 1) Inspired by the ancient Roman temple form, the Capitol was the first effort to give architectural expression to the republican form of government. Jefferson acknowledged that Roman classicism, particularly as interpreted by Palladio, had achieved the “approbation of the ages,” and thus should serve as the foundation for a new national architecture for a unique new nation. Moreover, in his design for the University of Virginia, Jefferson had the various parts of the complex display different versions of classical vocabulary to serve as architectural instruction of the students. In the execution of the university’s buildings Jefferson wittingly or unwittingly informed a large body of skilled masons and carpenters on the correct use of classical architecture. Armed with this knowledge, these workmen subsequently applied their skills in the design and construction of a wide variety of Jeffersonian classical buildings throughout Virginia. A particularly important group of these works is county courthouses. During the second quarter of the 19th century, more than twenty courthouses exhibiting characteristics of Jeffersonian classicism were built across the state. Prominent among the courthouse builders who had worked at the university were Dabney Cosby, Sr., Malcolm F. Crawford, and William B. Phillips. They in turn influenced other builders in the Jeffersonian idiom, including Branch Ellington, William A. Howard, David Meade, and Valentine Parrish. 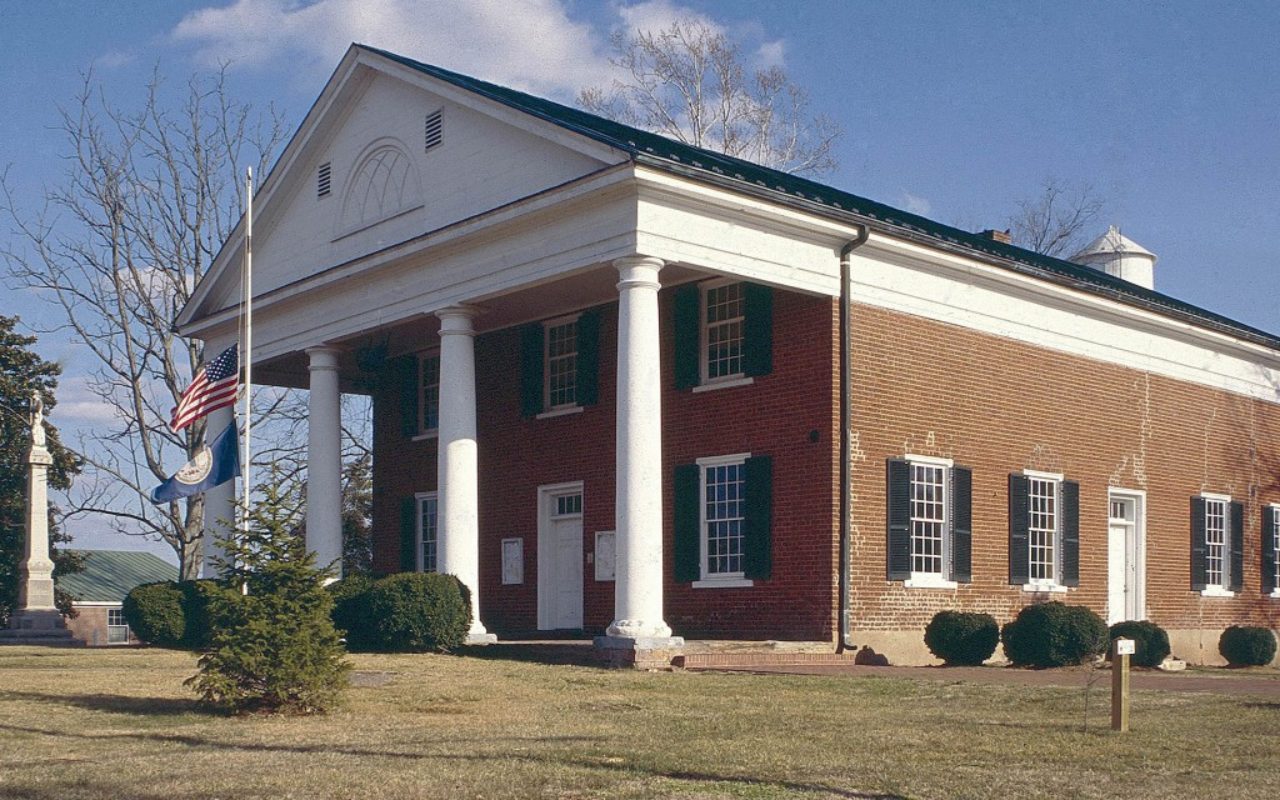 Jefferson himself provided designs for three courthouses.[1] The only one of the three to survive is the Charlotte County Courthouse, completed in 1823. (Figure 2) Following the precedent of the State Capitol the compact redbrick structure took the form of a classical temple fronted by a tetrastyle Tuscan portico. Records show that the county commissioners admired Jefferson’s design for the Buckingham County Courthouse wanted to copy it for Charlotte. The layout followed a plan drawn by Jefferson showing a two-story courtroom with a rear gallery supported on a colonnade.  Jefferson’s plan also called for a three-sided apsidal end which apparently was built at Charlotte but later altered. John Percival, the courthouse’s builder, submitted bids for work at the university, but he is not known to have been employed there. At Charlotte, Percival incorporated a lunette with intersecting tracery in the courthouse pediment, but its panes were later painted over. It is hoped to be repaired in a pending restoration. 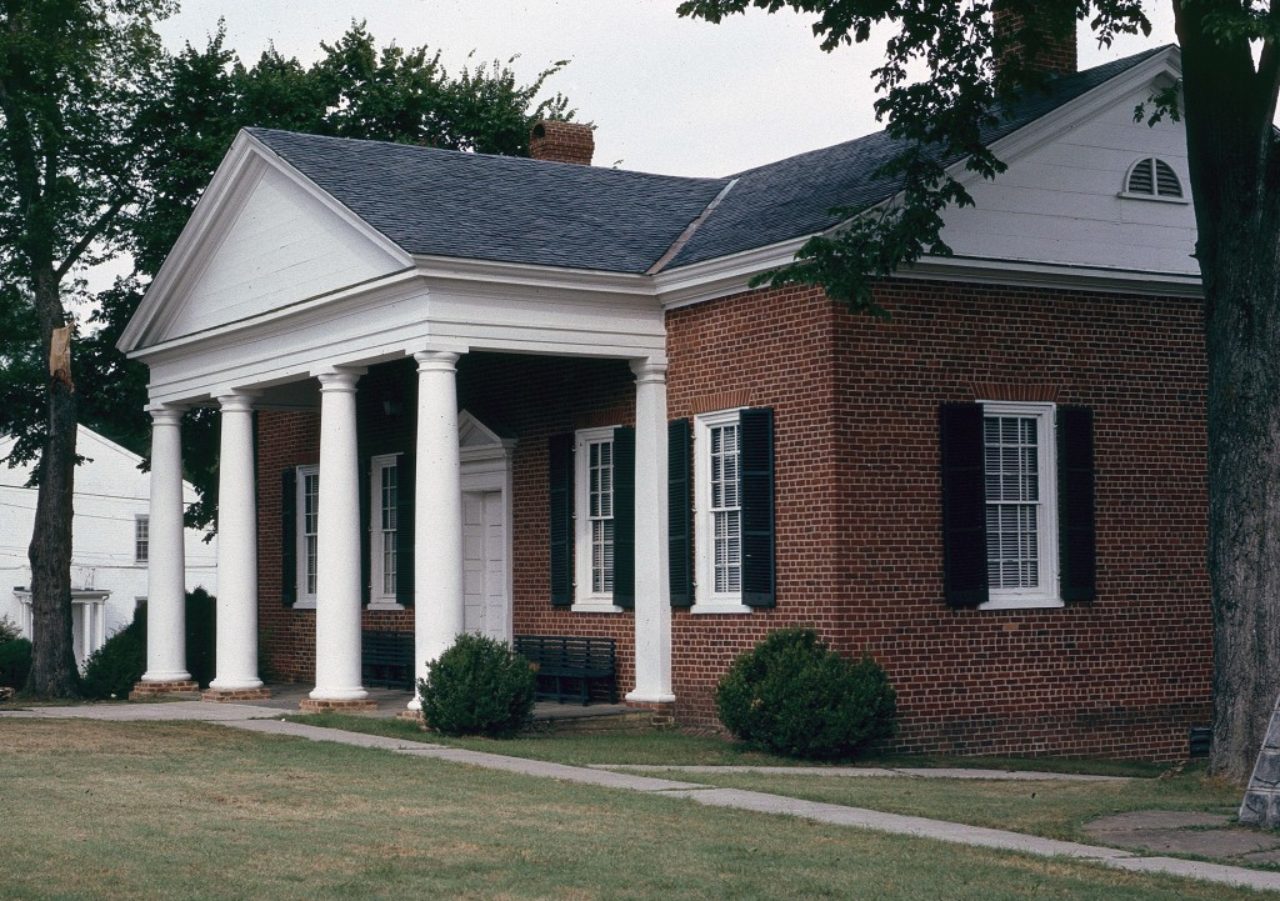 The tiny 1818 Cumberland County Courthouse departs from the norm by being only one story in height and having its portico situated on its lateral wall. (Figure 3) The original specifications stated that the portico was to be “after the Tuscan order according to Palladio.“ Further refinements include the pedimented gable ends and a pedimented doorway. The doorway’s pulvinated frieze is a unique use of this detail on a Jeffersonian courthouse. The building’s design and construction is the work of William A. Howard, who learned the classical language serving as an associate of university workman Dabney Cosby, Sr. Recent county growth has required an extensive rear addition which, fortunately, is visually suppressed. 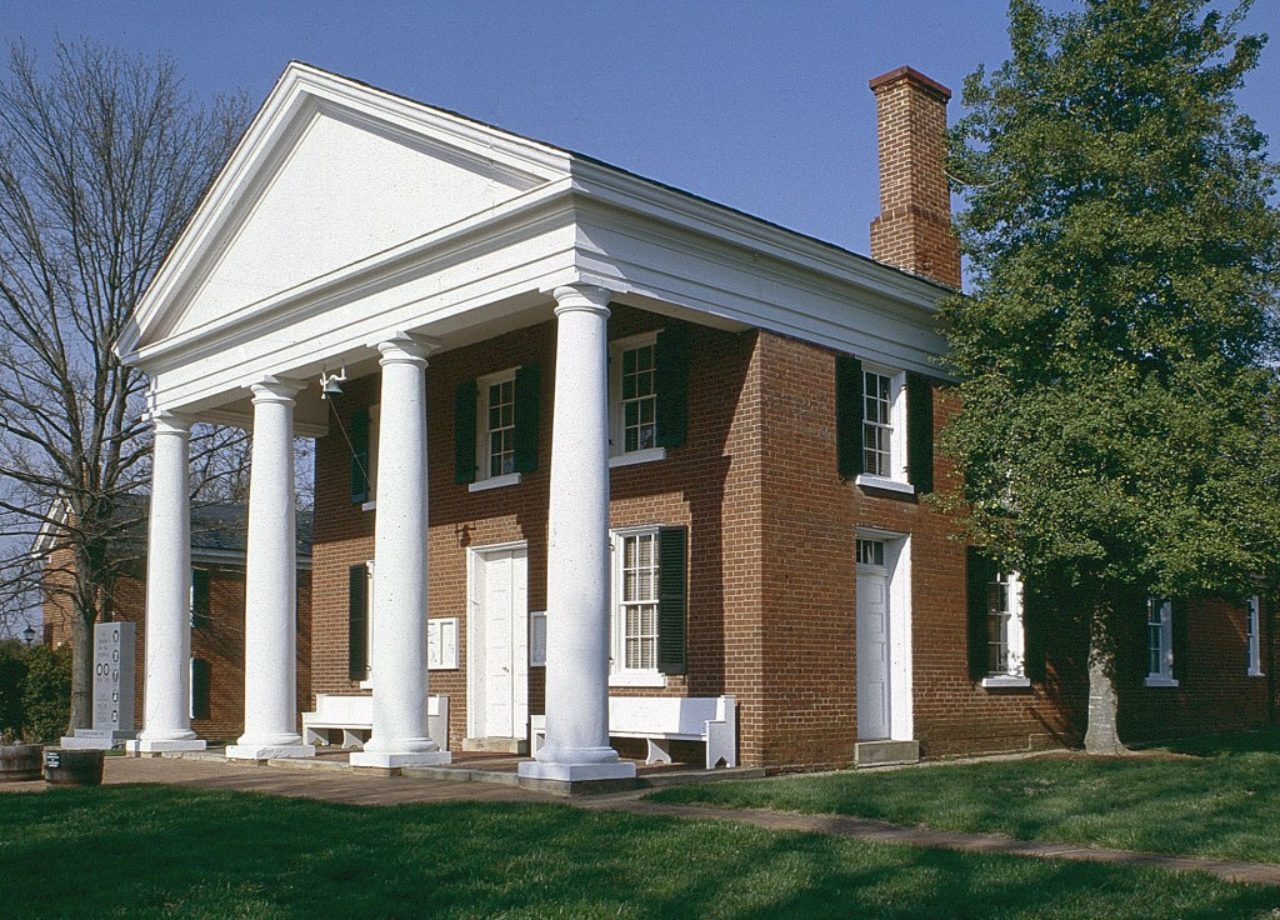 The Goochland County Courthouse follows the Tuscan temple form established by Jefferson’s design for the Charlotte Country Courthouse. (Figure 4) Completed in 1826, the building is the work of Dabney Cosby, Sr., who is credited with the design and construction of  a variety of building  throughout central Virginia, all displaying an informed use of the classical vocabulary. Cosby was assisted here by Valentine Parrish, who also worked on Jeffersonian structures in the region. Like all of the Jeffersonian buildings, the courthouse is rendered in red brick, white trim, and dark-green louvered shutters. The chimney stacks are in the form of a classical pedestal, a device that Jefferson used on the university pavilions. 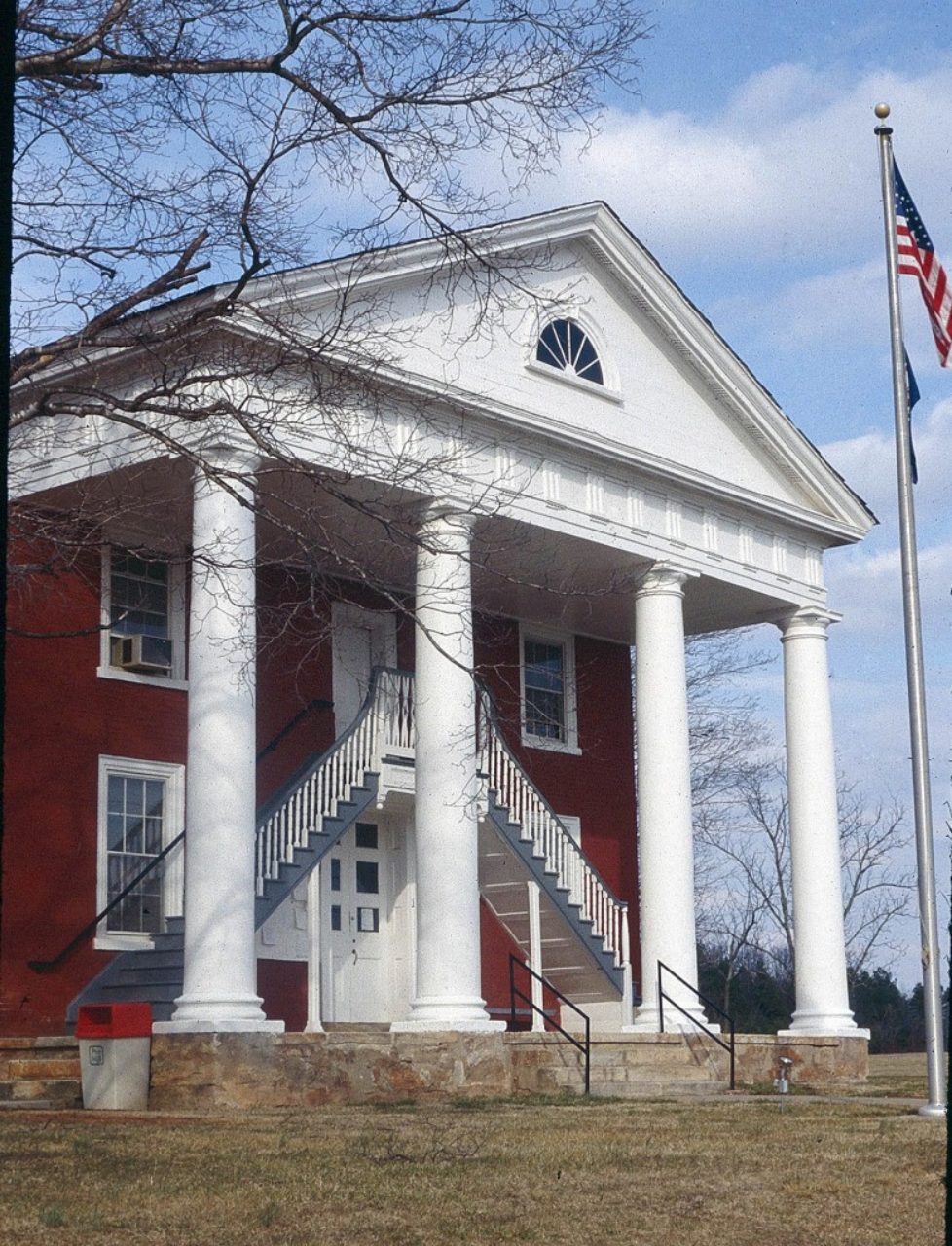 Situated in a tiny crossroad settlement, the Lunenburg County Courthouse represents perhaps best Jefferson’s ideal of the rural temple of justice. (Figure 5) Completed in 1827, the handsomely articulated structure is the work of Dabney Cosby, Sr. and William A. Howard. It is one of two surviving buildings of the Jeffersonian courthouse group to employ the Roman Doric order, which generally follows Palladio’s version here. Like most of the temple-form courthouses, the building originally had a two-story courtroom and a rear gallery containing jury rooms. The interior was divided into two levels in 1850 to provide more space, placing a new courtroom on the upper lever. The exterior stairs were added then to provide direct access to the courtroom.

The 1828 Sussex County Courthouse is a variation on the theme by having a tripartite form with a central arcaded pavilion and two-story wings. (Figure 6) Its builder, Dabney Cosby, Sr. elected to crown the building with a Tuscan cornice rather than a full entablature. The lunette window in the pediment incorporates intersecting tracery similar to that which Jefferson employed in the lunette on Pavilion IV at the University of Virginia.   Unlike the group’s other arcaded courthouses, the Sussex courthouse arcade has three bays rather than four. The central pavilion’s original apsidal end has been engulfed in a later addition. 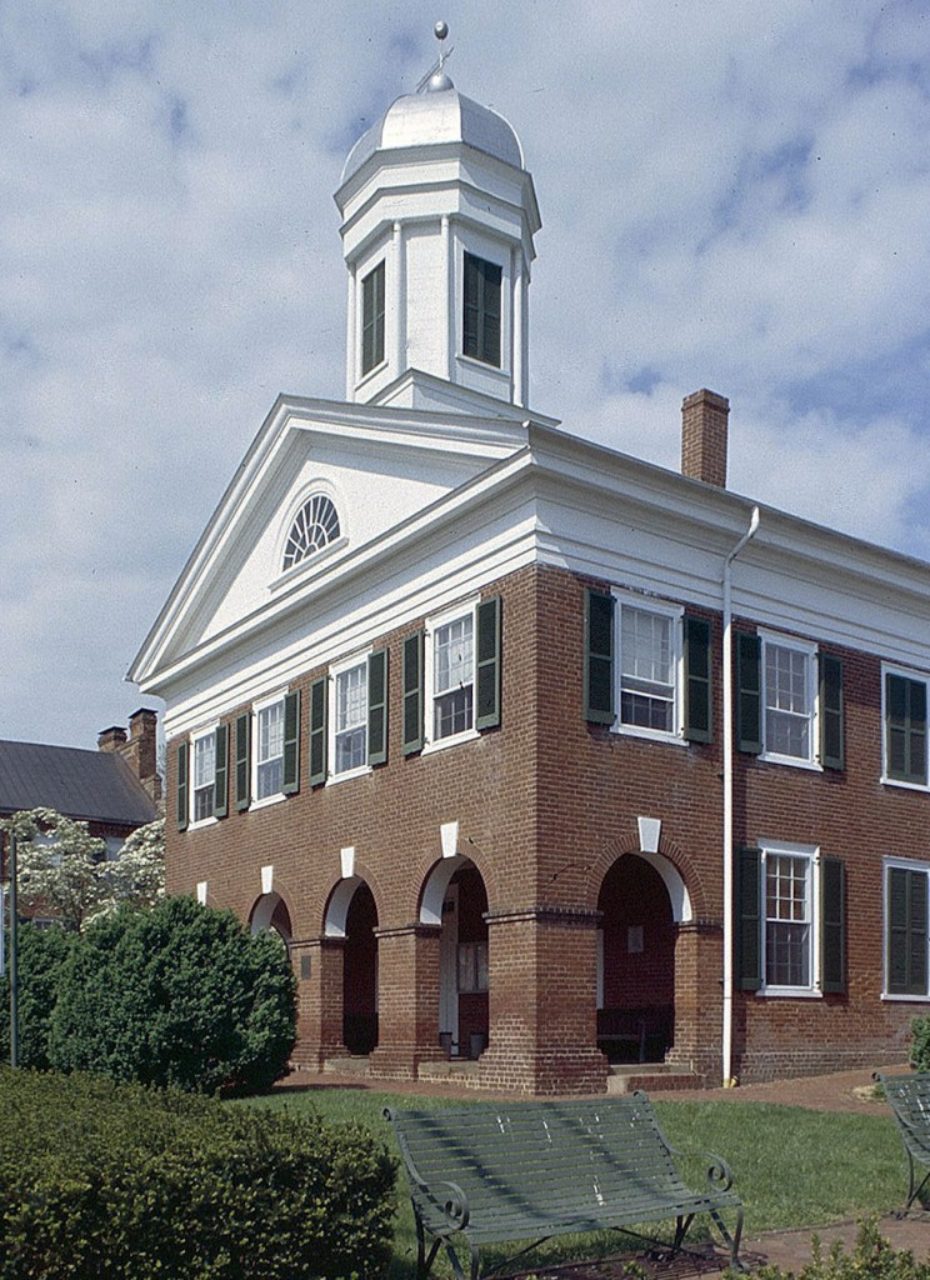 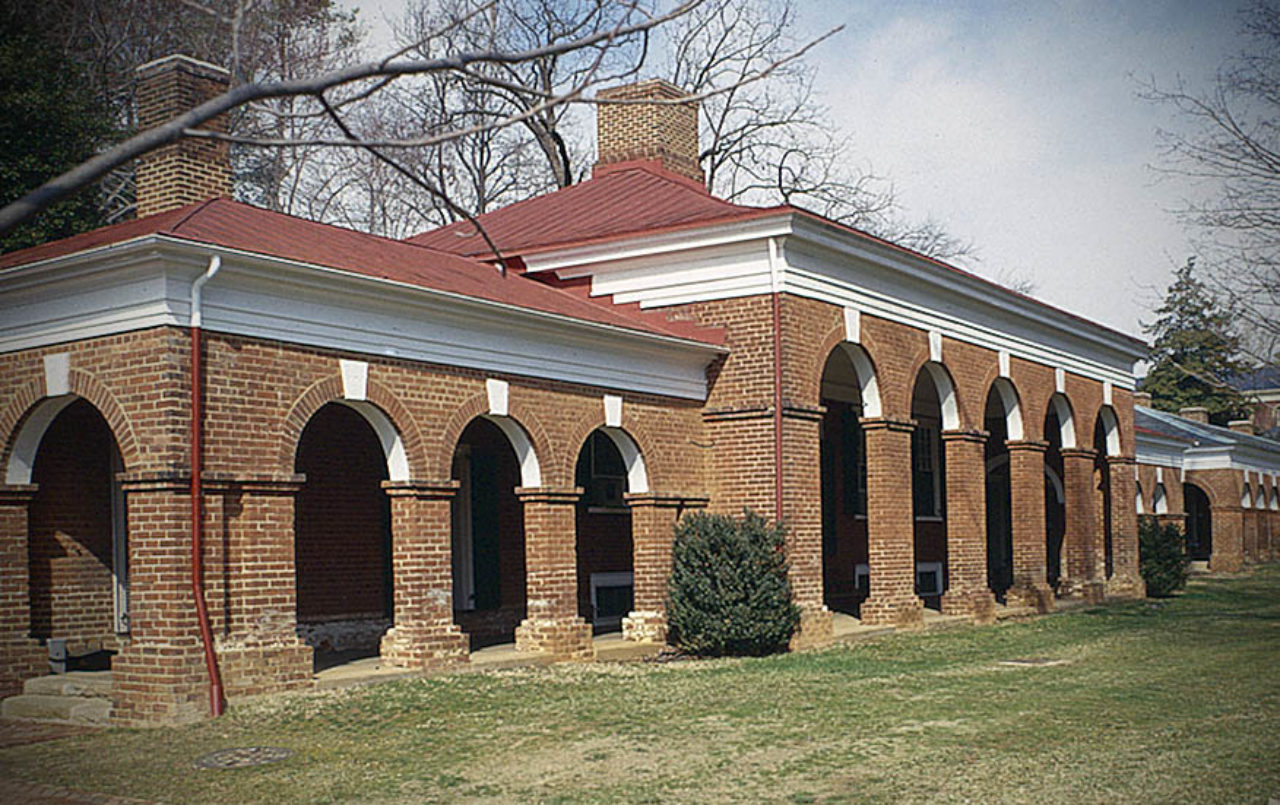 The Madison County Courthouse, completed in 1830 by University of Virginia builders William B. Phillips (brick mason) and Malcolm F. Crawford (carpenter), survives as perhaps the most potent example of these craftsmen’s skills (Figure 7). Worked into the temple-form scheme is an arcaded ground floor, a traditional device found on colonial-period courthouses, and ultimately derived from English town halls. The arches here have a Jeffersonian-Palladian character with their keystones and impost courses, and replicate the arcades of the university’s Ranges. (Figure 8) Other prominent Jeffersonian devices are the monumental Tuscan entablature and pediment with its lunette window. The facade’s precise Flemish bond brickwork is a distinguishing feature of Phillips’ buildings. 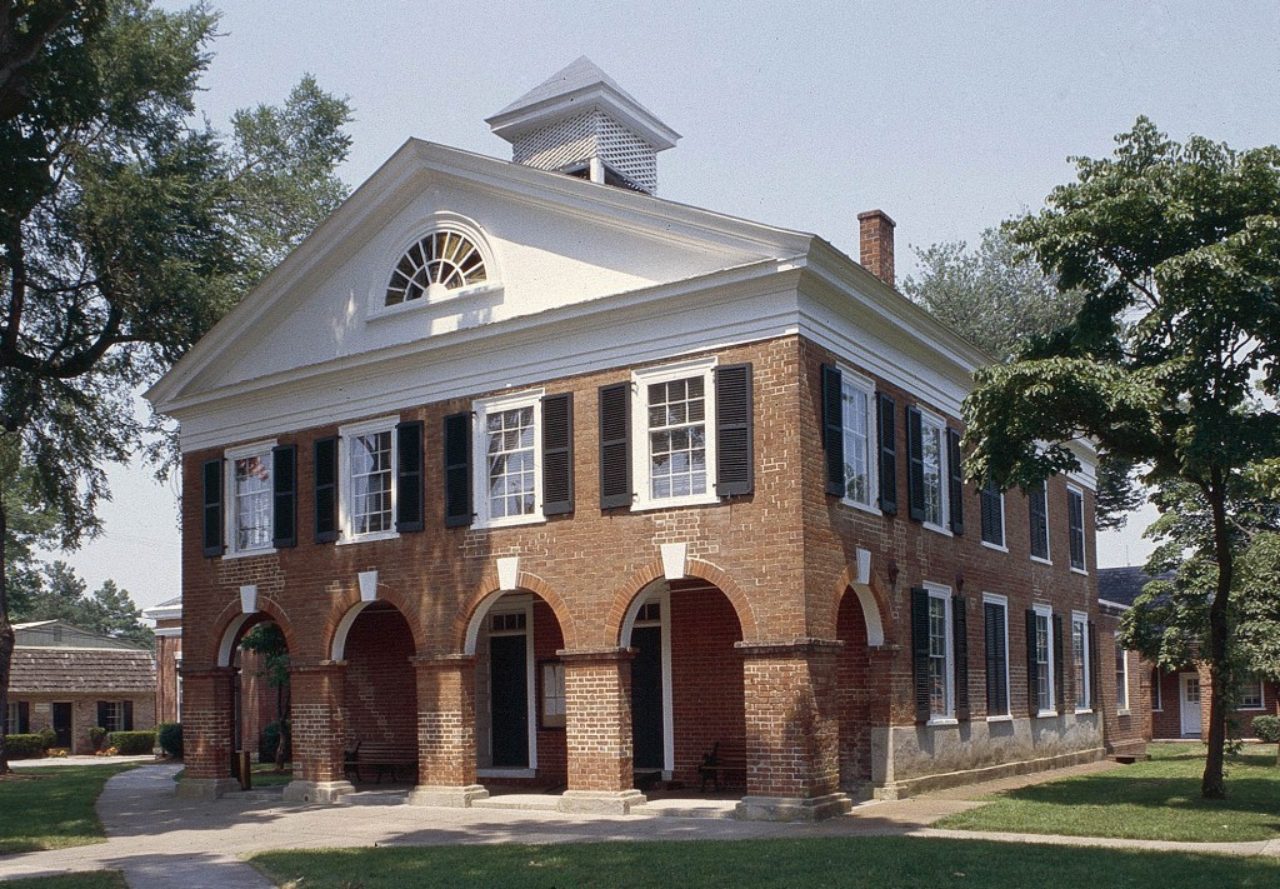 The destruction of its county records during the Civil War has prevented documentation of the 1830s Caroline County Courthouse. (Figure 9) Nevertheless, its near-identical appearance to the Madison County Courthouse make an attribution to William B. Phillips and Malcolm F. Crawford a safe one. The main difference between the two is the Caroline courthouse’s more compact scale. Like the Madison courthouse, Caroline’s has a four-arch arcade and a Tuscan pediment with lunette window. The simple belfry with its lattice sides is an early but not original feature.  Still in regular use, the courthouse is believed to be the county’s sixth courthouse. 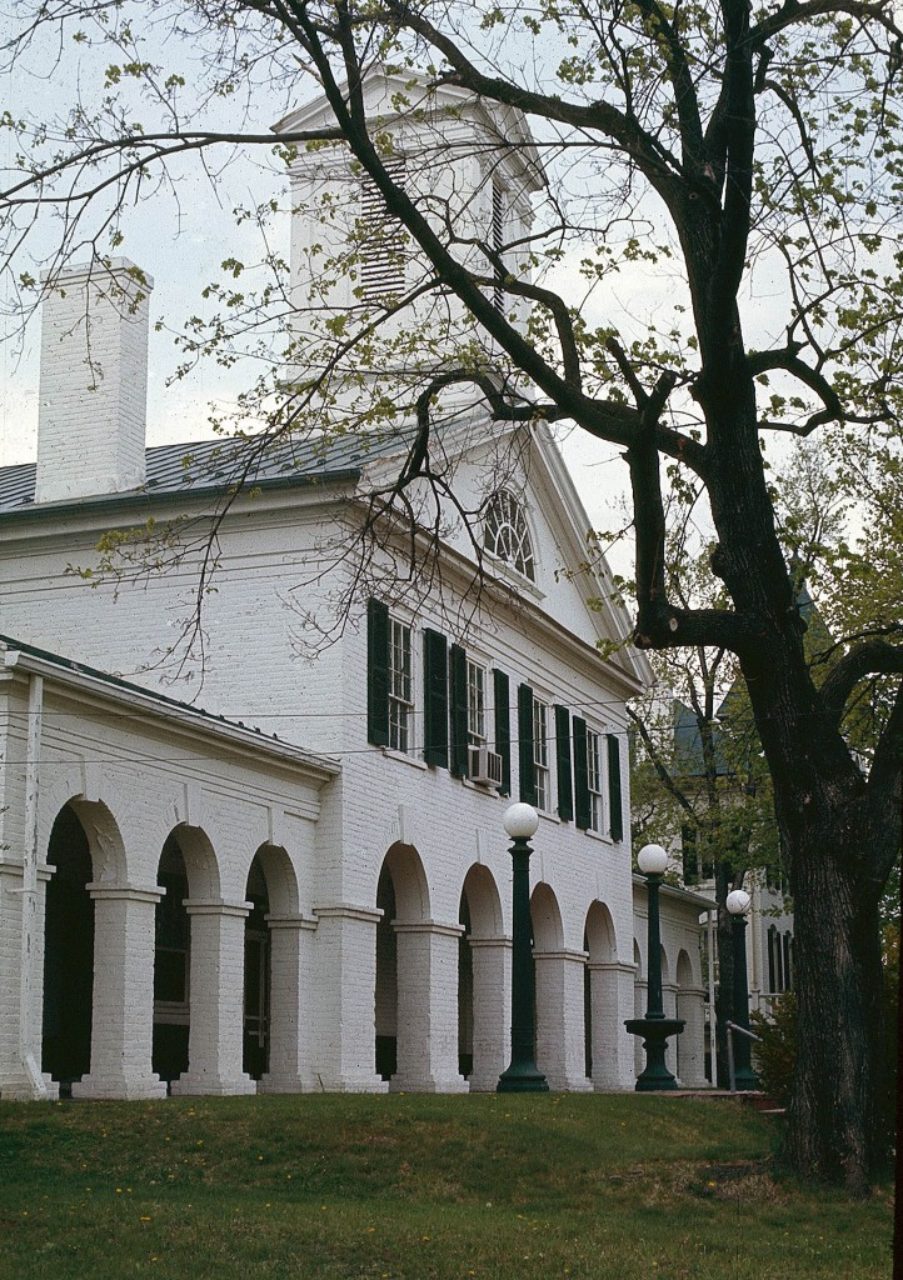 The talented partnership of William B. Phillips and Malcolm F. Crawford produced a third arcaded courthouse, for Page County. (Figure 10) Placed on one of the highest points in the town of Luray, the 1834 building resembles the Madison and Caroline courthouses except that the county commissioners specified that it have two wings. Phillips dutifully fronted the wings with arcades. During construction, Crawford was asked to modify the plans to provide a “cheap suitable steeple” for a donated bell. Crawford’s solution was a belfry with pediments and paired pilasters on all four sides, a scheme he also used for the Rappahannock County Courthouse. The Page courthouse has long been painted white. 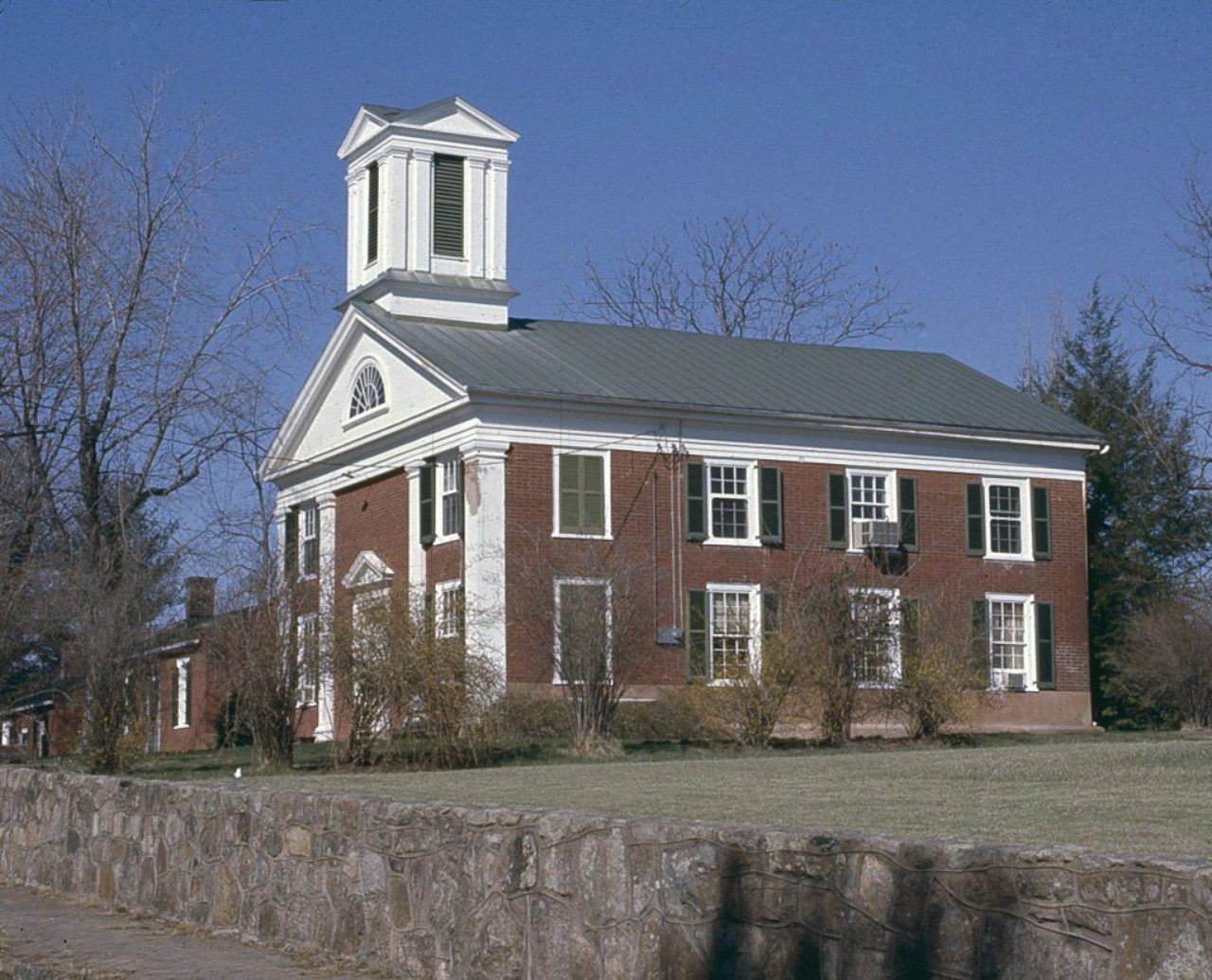 The sparse population of the largely rural Rappahannock County may account for its courthouse’s relatively low budget of $4,500, and the resulting absence of a portico or arcade. (Figure 11) Nevertheless, builder Malcolm F. Crawford gave dignity to the temple-form composition by the use of an engaged portico with Tuscan pilasters and pediment. The wide central bay resulted in the pilasters being paired rather than evenly spaced. In addition, Crawford gave prominence to the entrance with the use of a pedimented doorway. Sited on a high point in the picturesque county seat village of Washington, the 1834 building is highlighted by a tall belfry with pediments and paired pilasters similar to that which Crawford provided for the Page County Courthouse. 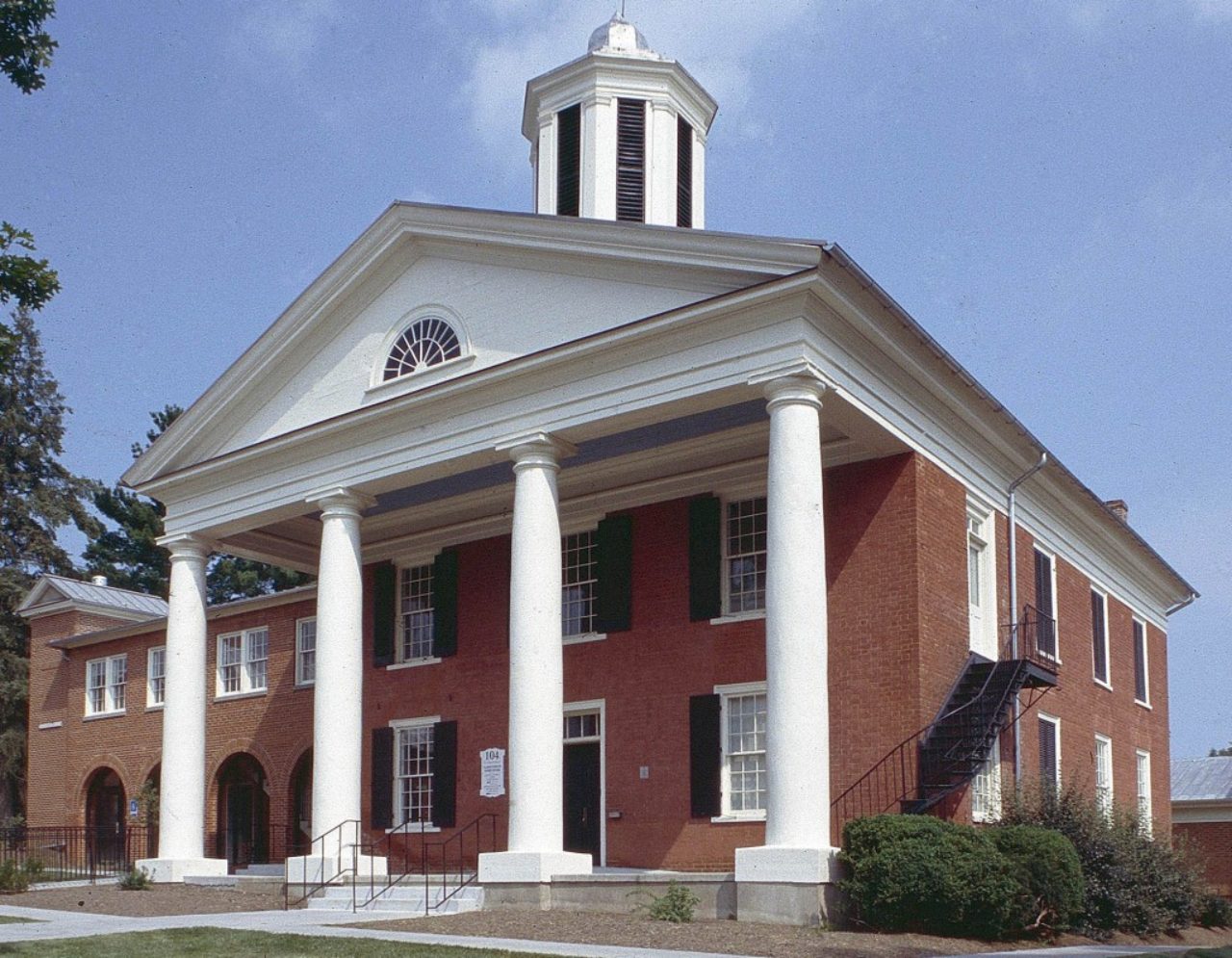 The Tuscan temple form of the ca. 1836 Clarke County Courthouse in Berryville closely parallels that of the Charlotte and Goochland courthouses. (Figure 12) However, its builder, David Meade, has not been associated with other Jeffersonian works or Jefferson builders, and died before the building was completed. The portico’s columns and pediment follow the classical canon, but the column bases were later encased in ugly concrete blocks. A handsome detail is the full entablature surrounding the portico ceiling, a treatment not often seen. The octagonal belfry is one of the more successful designs for this feature. The interior configuration has been completely rearranged and preserves little original fabric. 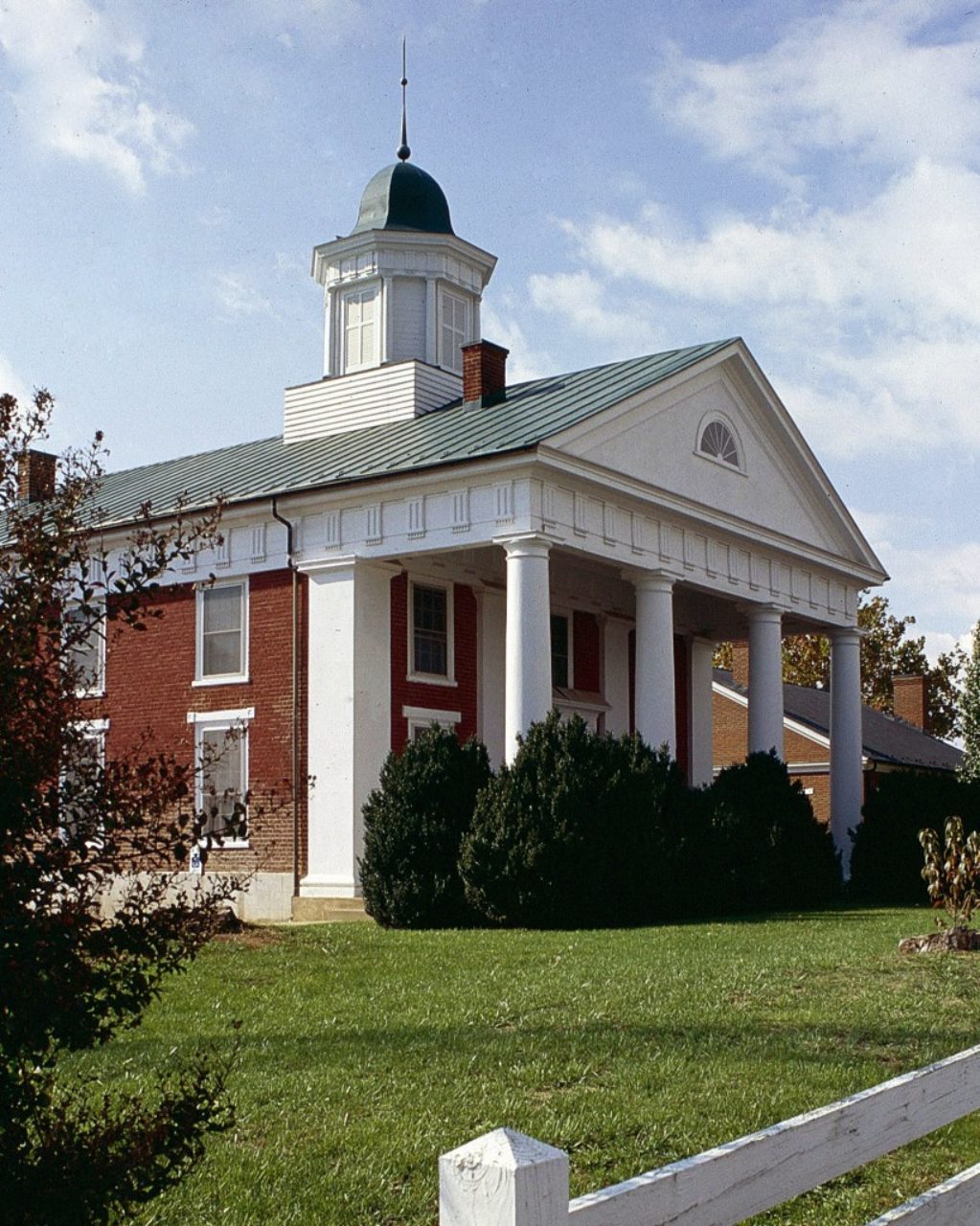 The Greene County Courthouse in the village of Stanardsville is the last of the court structures to be built by William B. Phillips, who was employed here by William Donoho, the chief contractor. (Figure 13) As with Rappahannock County, Greene County was sparsely populated and had a limited budget for a new building, hence the structure originally had no portico. A historic photograph shows the facade articulated by wide pilasters, which survive. The present portico was built in 1928 and is generally conceded to be favorable addition. Budget constraints, however, did not inhibit the use of the Doric order for the building’s entablature. The octagonal belfry with its bell-cast dome, is believed to be original. The courthouse was nearly destroyed by a 1979 gas explosion, but has been carefully restored. 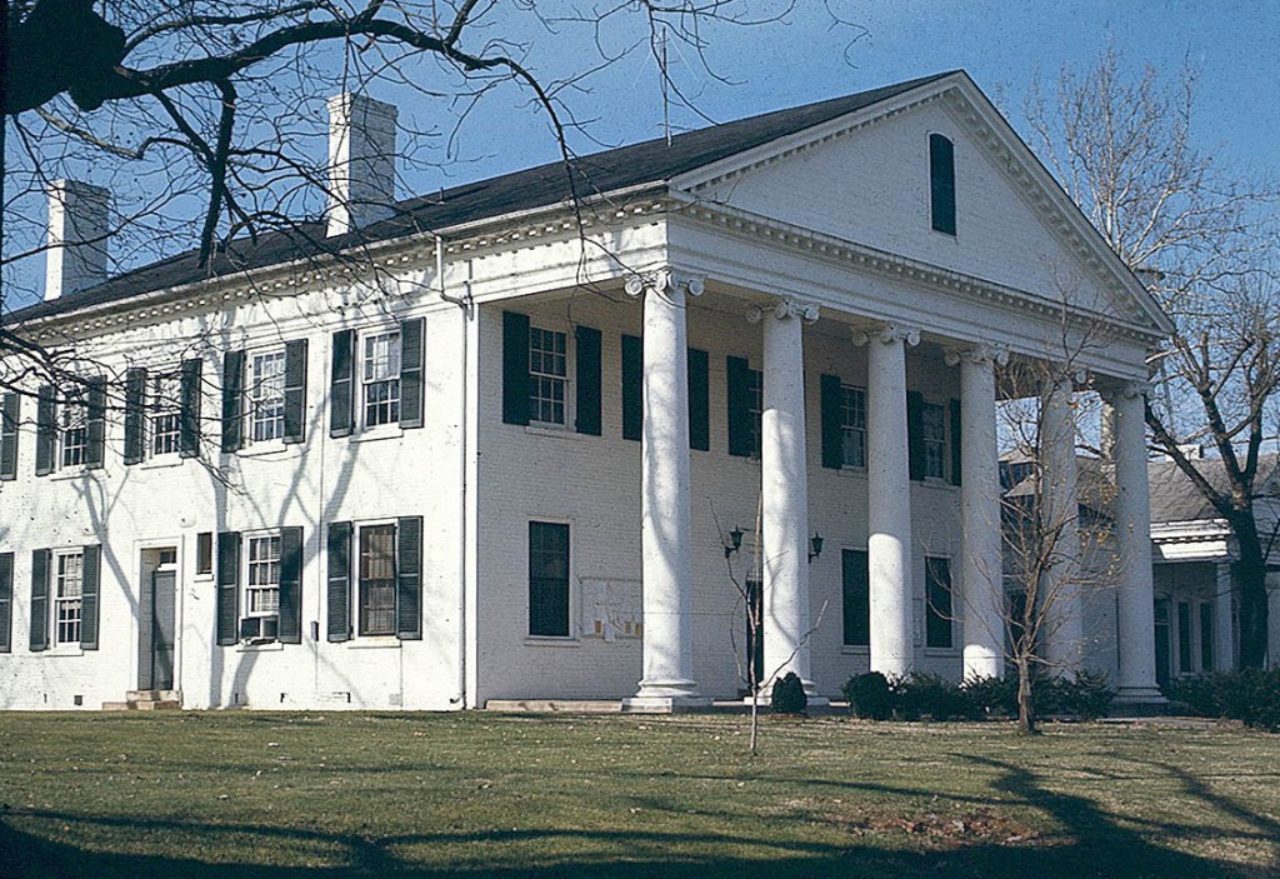 The Mecklenburg County Courthouse in Boydton is the most architecturally ambitious of the Jeffersonian courthouse group. (Figure 14) It is the only one to have a hexastyle portico and to use the Ionic order. The Scamozzi capitals (angled volutes) give the building a close resemblance to the Jefferson’s Virginia State Capitol.  The resemblance is heightened by the later white painting of the original red bricks. The courthouse was constructed between 1838 and 1842 by William A. Howard and James T. Whitice. As noted above, Howard was also associated with the Cumberland and Lunenburg courthouses. The building has recently been subjected to extensive additions. 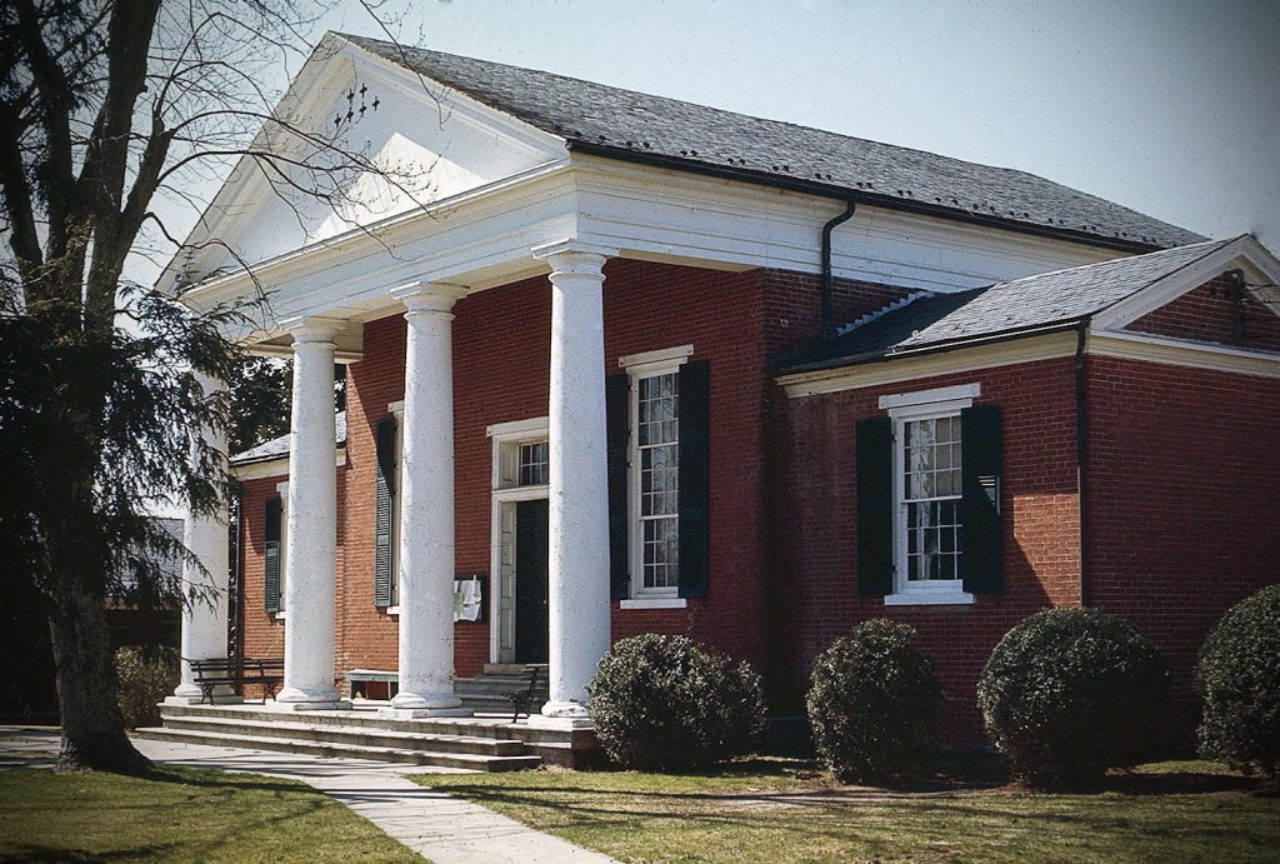 Among the more handsome and architecturally articulate of the Jeffersonian courthouses is that of Nottoway County, built in 1843 by Branch H. Ellington, who has not been associated with other Jefferson builders. (Figure 15) The building follows a Palladian tripartite scheme with pedimented central section and flanking lower wings. The tetrastyle Tuscan portico with araeostyle column spacing is similar to that on several other Jeffersonian courthouses. Ellington’s triple-hung sash behind the portico is a device that Jefferson employed extensively in both Monticello and the University of Virginia, but is the only instance of this window type in the courthouse group. An elegant appointment not seen in the other courthouses is the white marble of the window lintels and sills.

A lesson we might draw from these early courthouses is that when properly applied, the classical language lends dignity and timelessness to the simplest buildings. Most of the counties mentioned here have had to add to their buildings, or have built expansive county office buildings to meet growing needs. Yet the courthouses remain objects of pride and continue to serve as their counties’ primary county landmarks. Writing in his Notes on Virginia (1781) Jefferson decried the poor state of Virginia’s public architecture. He blamed it on the fact that “a workman could scarcely be found capable of drawing an order.” By the time of his death in 1826, he had directly and indirectly generated a school of workmen who produced a body of architecturally literate works spread throughout the Commonwealth. The courthouses represent some of their best efforts and remain important symbols of justice and democracy of the young republic.