Senior Architectural Historian for the Virginia Department of Historic Resources and a member of the Institute of Classical Classical Architecture & Art‘s Advisory Council.

Figures of Greek and Roman mythology have served as architectural adornments from ancient times to modern. Throughout the western world pediments, friezes, balustrades, and niches have been embellished with representations of ancient deities and their kin. However, two of the most dramatic celebrities of the Homeric family, Telamon and Atlas, have been applied to buildings only rarely, and almost never in recent decades. In the Illiad, Telamon was the son of King Aeacus and father of the Greek hero, Ajax. He is remembered chiefly as the first to break through the Trojan wall, an act that enraged Heracles, but who was placated when Telamon built an altar in his honor. The name Telamon derives from a Greek word meaning support or bearer. Telamon is thus shown in sculpture as a brawny male bearing a weight or burden. His name has become the architectural term for a sculpted figure with arms aloft holding a cornice or a lintel.

Probably the earliest and most impressive use of Telamon or Telamones (pl.) on an architectural work was at the Temple of the Olympian Zeus in Agrigento, Sicily, dating from the 5th and 6th centuries B.C. One of the largest Greek temples ever conceived, it was built to commemorate the Greeks’ defeat of the Carthaginians. It apparently was never finished as the Carthaginians conquered Agrigento while the temple was under construction. A model in the archaeological museum at Agrigento shows the conjectural placement of the Telamones in the upper portions of the temple’s bays. (Fig. 1) We can grasp their gigantic scale through a surviving but badly weathered Telamon assembled from fragments for display in the museum. (Fig. 2) The temple collapsed in an earthquake in 1401 and many of its stones were robbed for constructing the nearby town. 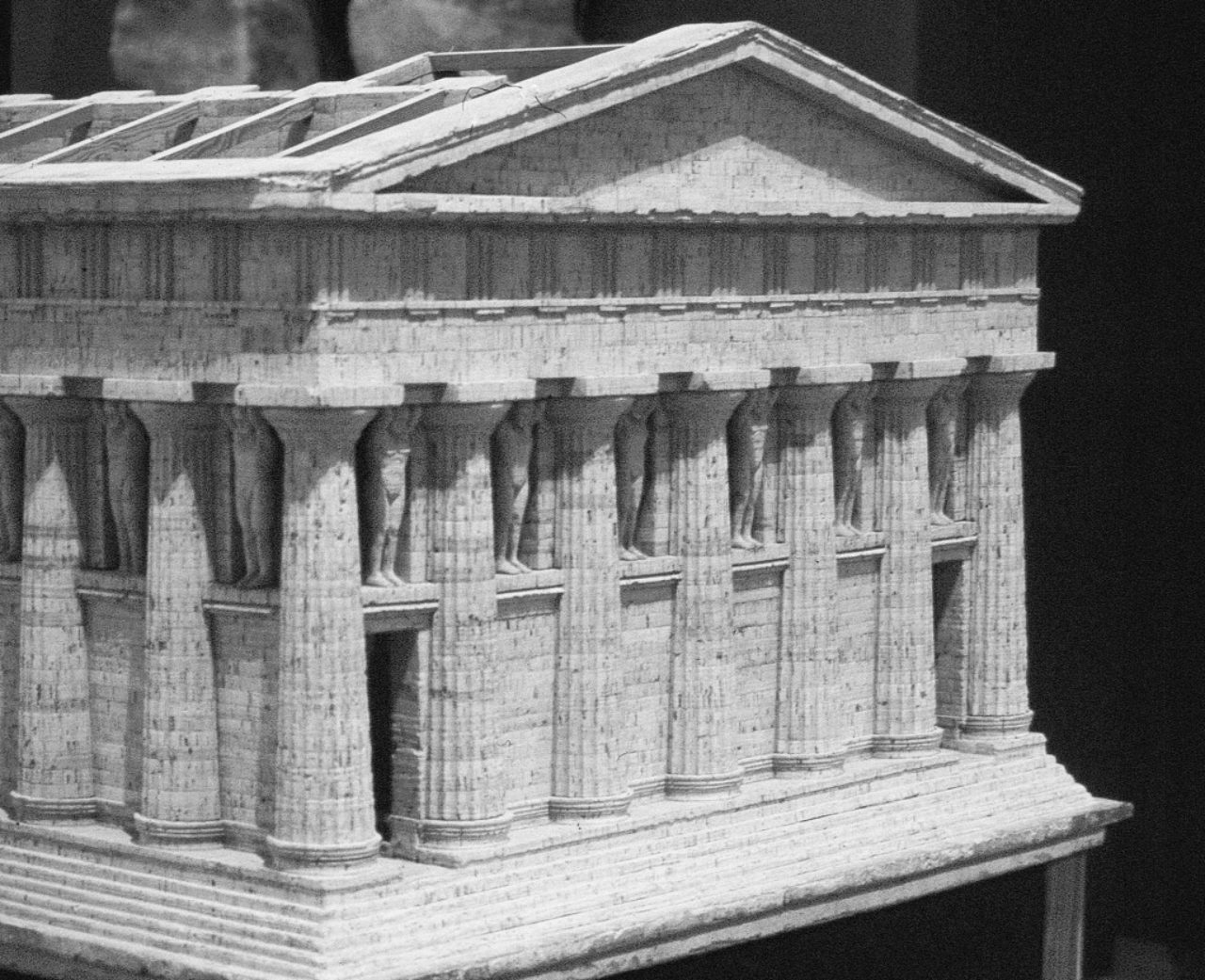 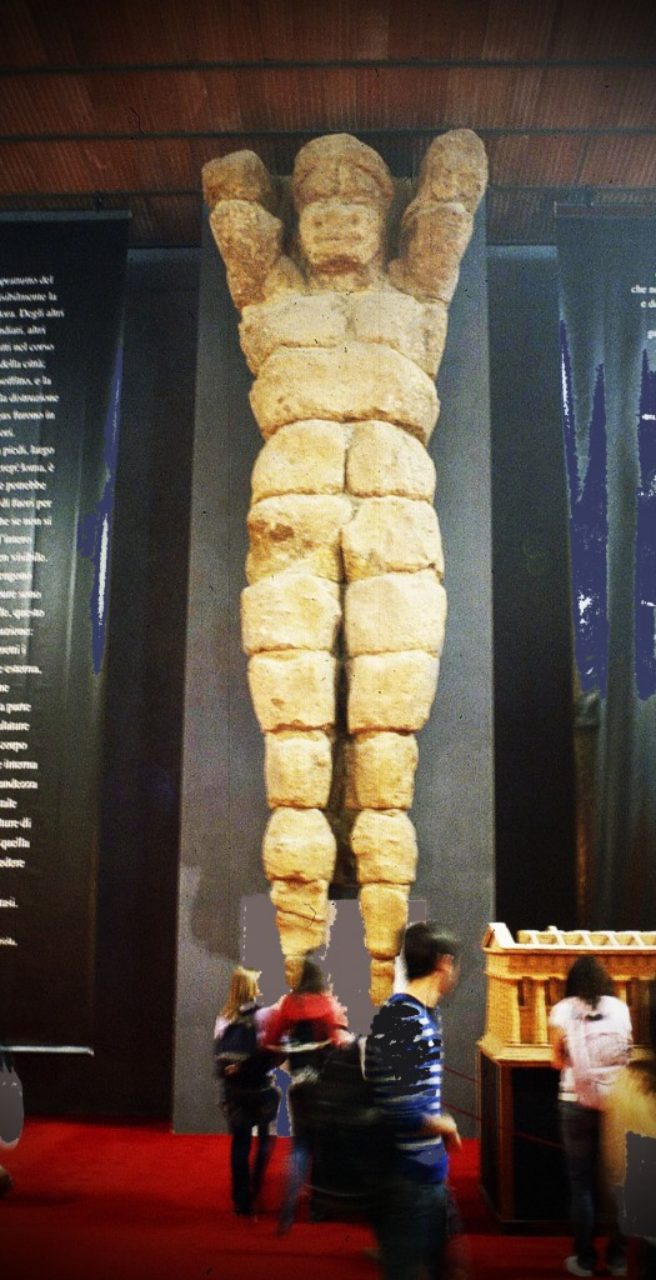 While Telamon is characterized as a figure bearing a burden, so is the mythical Atlas. Atlas was one of the Titans, a family of elder deities who were overthrown by the Olympians, a race of younger gods.[i] Zeus, father of the Olympian gods, condemned the captured Atlas to stand at the western edge of earth and hold the heavens on his shoulders. Atlas’s position at the end of the world was present-day Morocco, and it is from him that the Atlas Mountains derive their name. The plural form of Atlas is Atlantes. Thus it is tempting to think that the sea beyond the Atlas Mountains--the Atlantic Ocean--takes its name from the Titan Atlas. However, according to one of Plato’s myths, the ocean apparently was named for another mythological Atlas, the son of Poseidon, first King of Atlantis. Atlantis as we all know was the fabled land that sank into the sea.[ii] 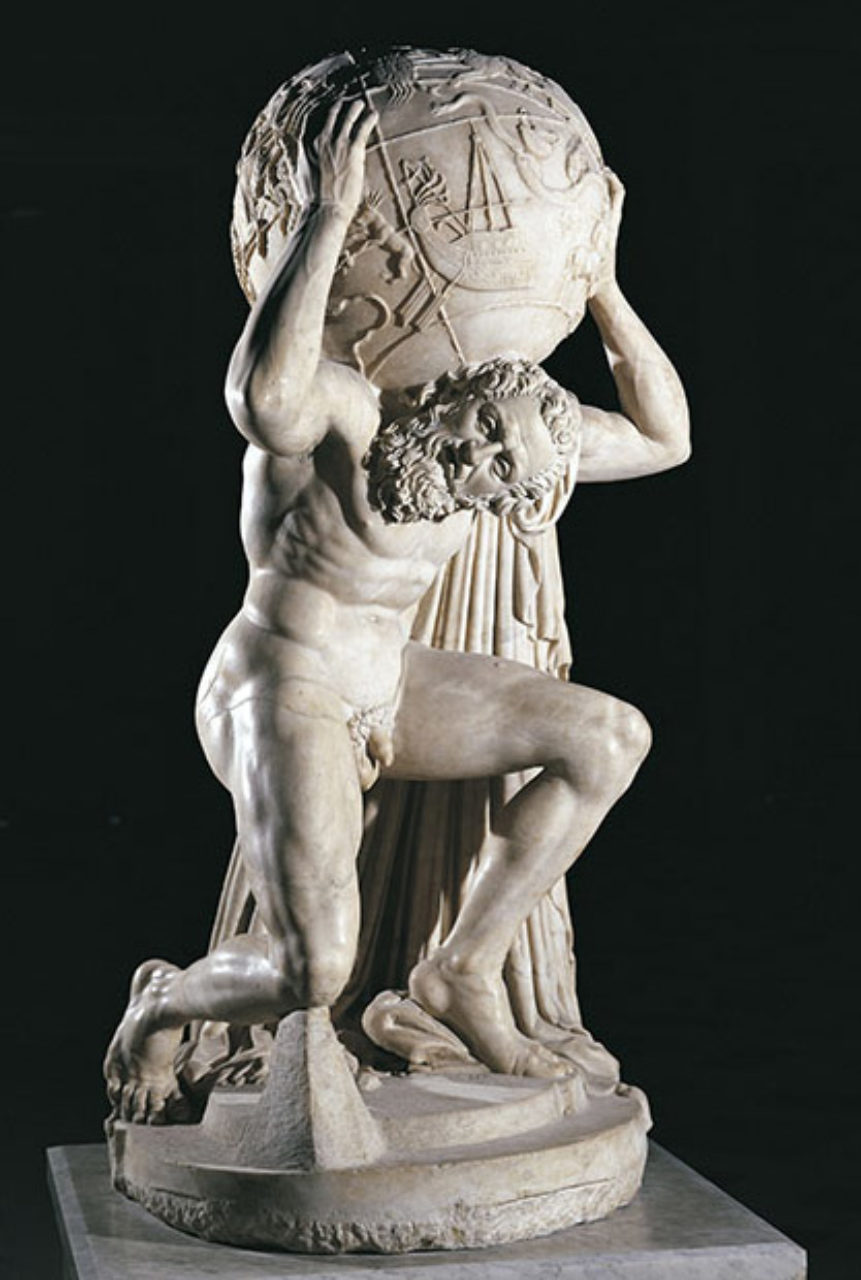 Among the earliest representations of the Titan Atlas is the so-called Farnese Atlas, a 2nd–century Roman copy of a Hellenistic statue. (Fig. 3)[iii] Here we see Atlas straining under the burden of the cosmos, shown as an orb decorated with symbols of the Greek constellations.[iv] One of the best surviving ancient examples of Atlantes used as architectural ornaments is found in the tepidarium or warm bathing chamber of the Forum Baths of Pompeii. Dating from 80 A.D., the chamber walls are decorated with a series of beautifully modeled Atlas sculptures, each barely more than a foot high. (Fig. 4) Like the Telamones, the Atlantes’ arms are held aloft to support the lintel. We might note that Atlantes and Telamones should not be confused with Caryatides, the name given to female figures serving as columns. The prototype Caryatids are the six female figures holding the side porch of the Erechtheum on their heads.[v] (Fig. 5) Caryatids however are a subject of their own, one which we will save for a later discussion. 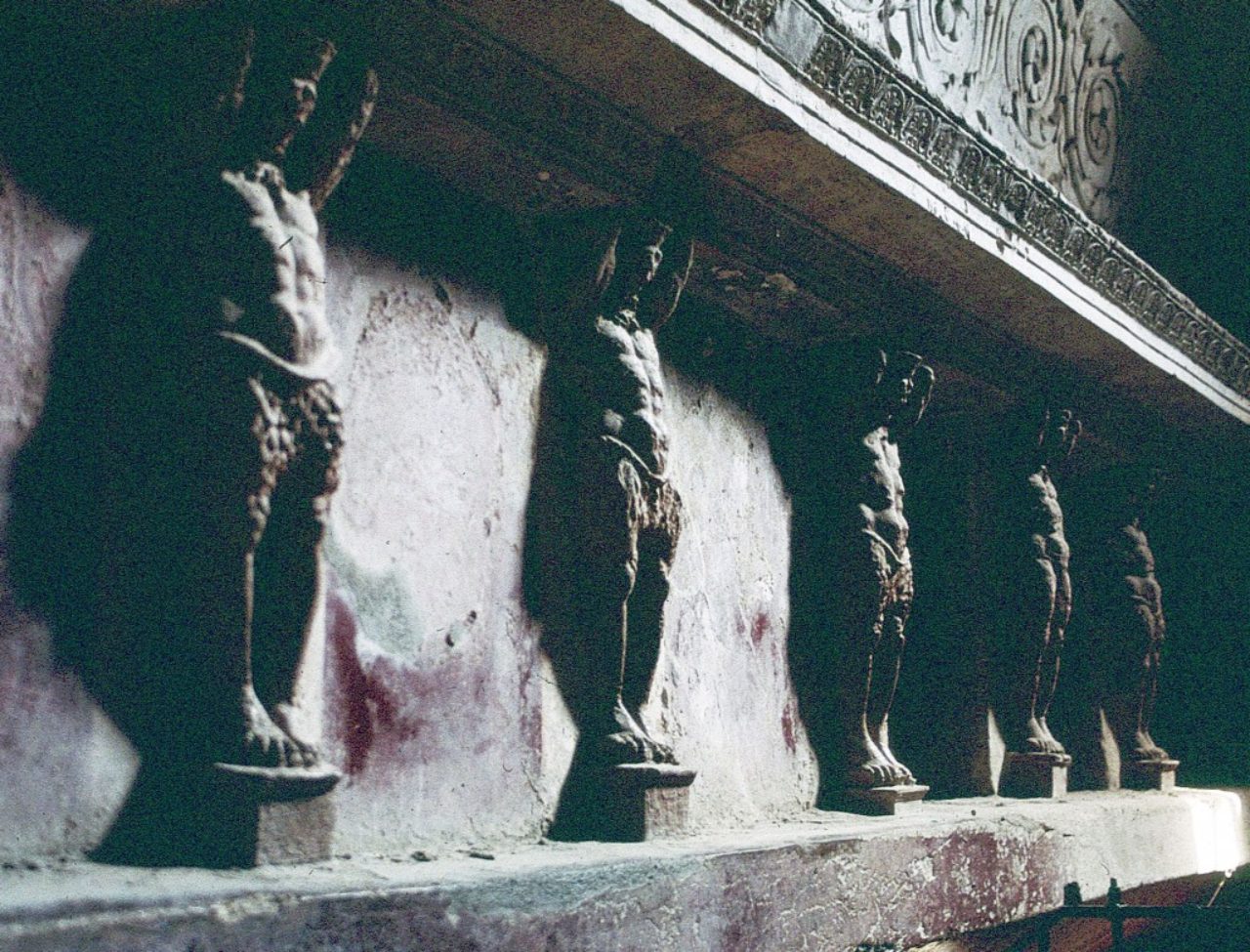 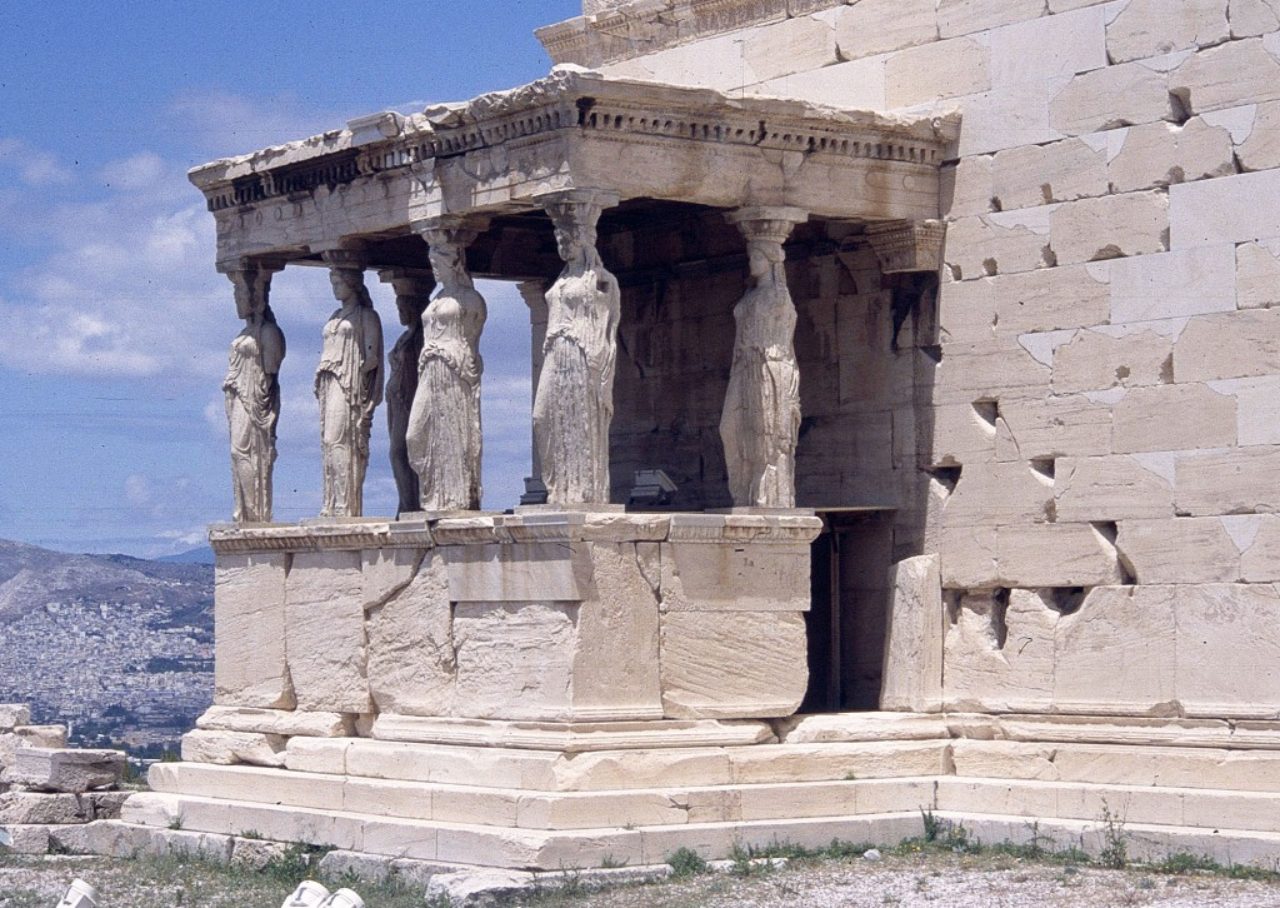 Various interpretations of Atlantes can be found on Baroque works throughout Europe. Johann Lukas von Hildebrandt employed Atlantes to support the entablatures on the entrance to Vienna’s Kinsky Palace, completed in 1716. In typical Baroque fashion, his figures do not stand up straight but instead pose in an S curve. (Fig. 6)  Lukas von Hildebrandt once again engaged Atlantes, but more beefy ones, to hold up the vaults in the entrance hall of the Upper Belvedere Palace, completed in 1723. Sculpted by Lorenzo Mattielli, these struggling figures are braced against tree stumps for extra support. (Fig.7) 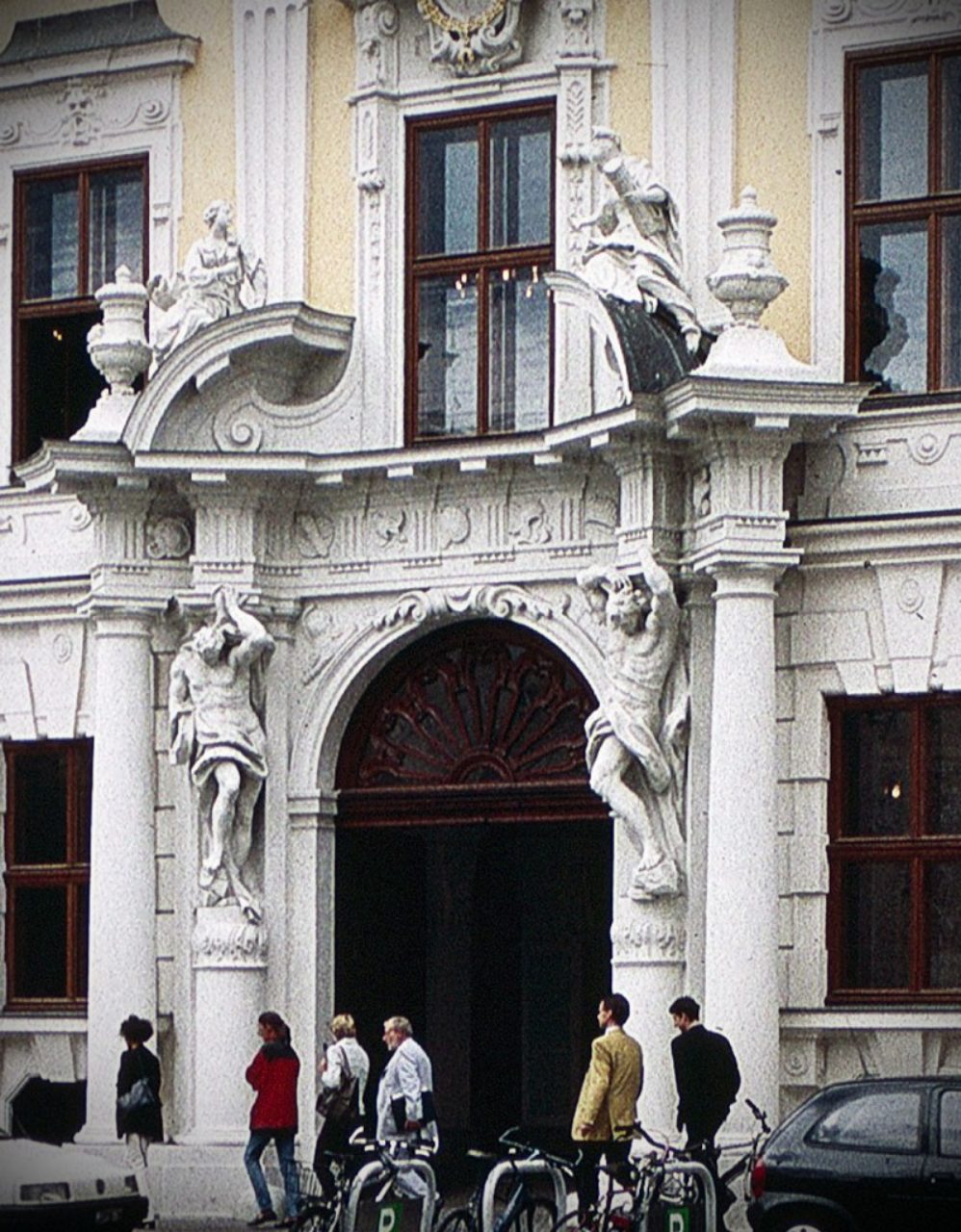 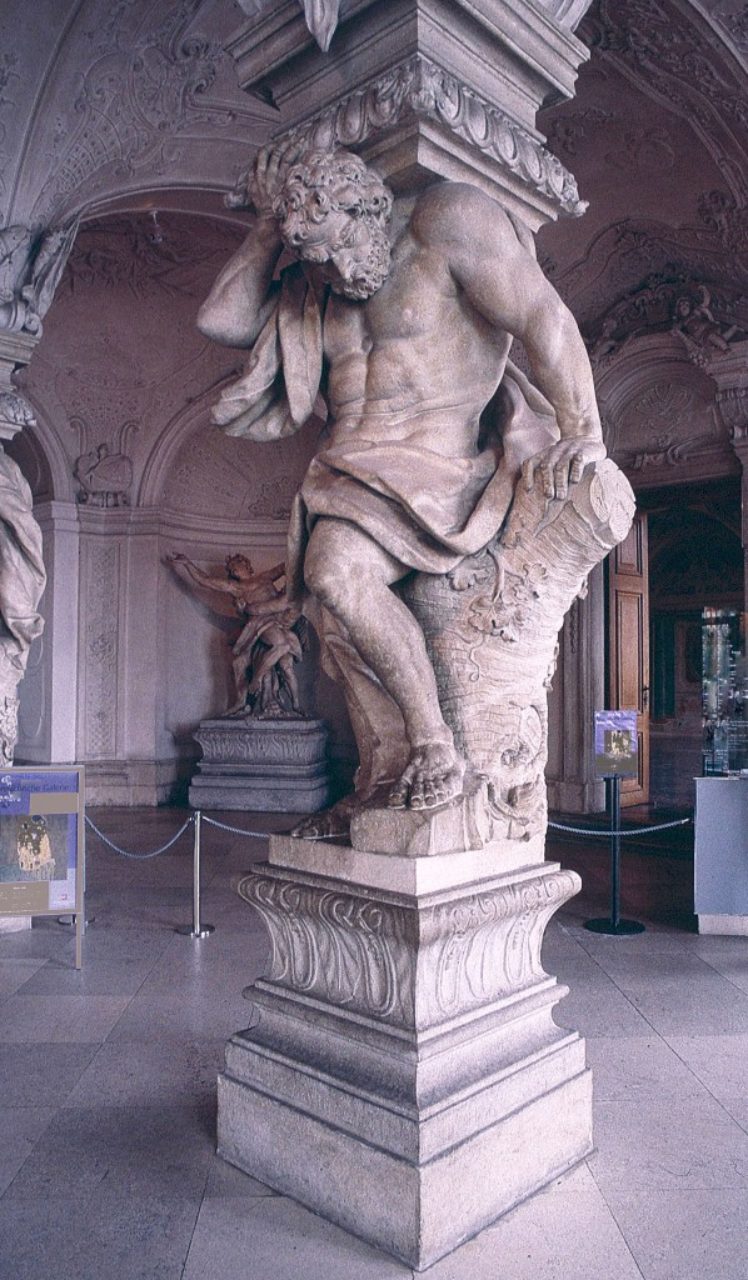 Perhaps the most notable of all Atlantes are the ten dark granite monoliths shouldering the portico of the New Hermitage Museum in St. Petersburg, the design of the Bavarian architect Leo von Klenze completed in 1852. Sculpted by Alexander Terebeniev, the three-times life-size Atlantes exhibit the stolid muscularity of the Telamones of the Temple of Zeus. (Fig. 8) 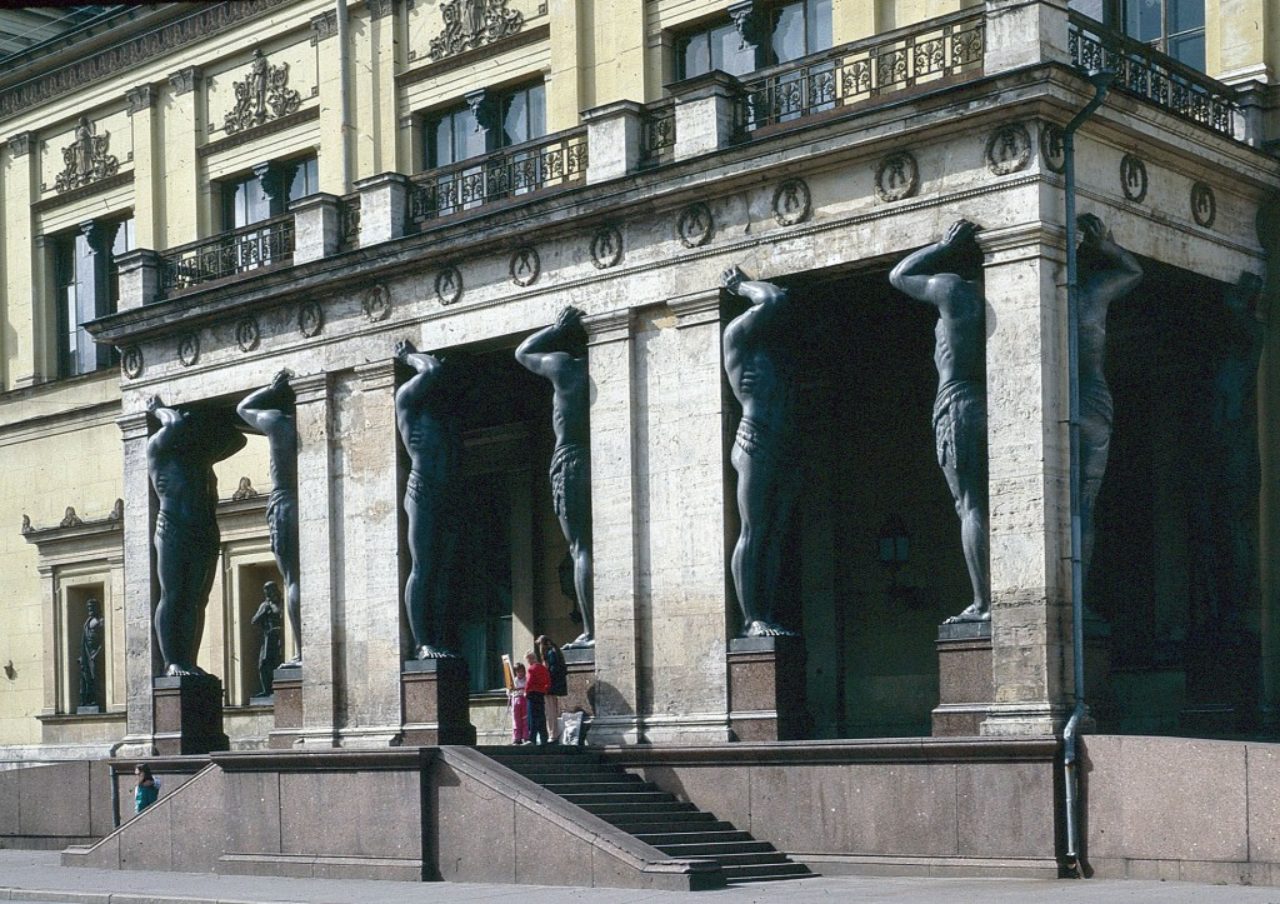 A search for American Atlantes produces scant finds. Architectural sculpture during the country’s heyday of classical design generally favored either free-standing statues or bas-reliefs.  Nevertheless, building-spotting can have its rewards. John McArthur Jr.’s Philadelphia City Hall is so encrusted with sculptural decoration that its numerous Atlantes high-up on its ornate dormers can easily be overlooked. The Atlantes are among the building’s more than 250 sculpted figures created by Alexander Milne Calder.[vi] Two of his more exotic Atlantes represent Native Americans, one of whom is female, dutifully helping her companion brave support the dormer’s pediment. (Fig. 9) 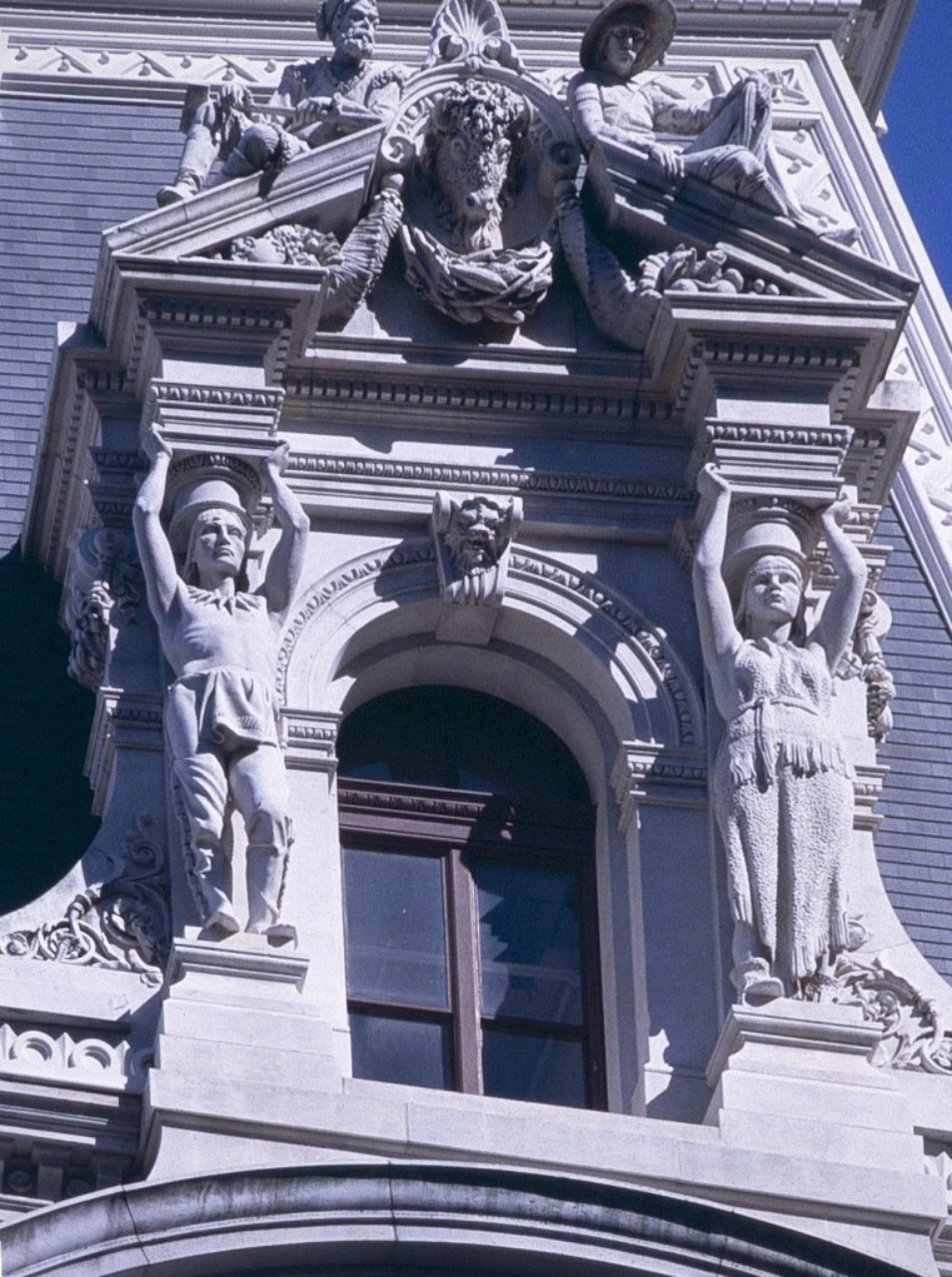 Sometimes Atlantes are interpreted as terms: the name given to a classical head or half-length figure attached to a downward tapering pedestal. Architect Francesco Preti incorporated terms functioning as Atlantes on the entrance feature of the lavish early 18th-century Villa Pisani in Stra (Fig. 10) In contrast to standard Atlantes, who use both arms to reinforce parts of a building, the Pisani figures are rather casual, each holding only one arm aloft and giving the appearance of scratching their heads rather than supporting any structural element. 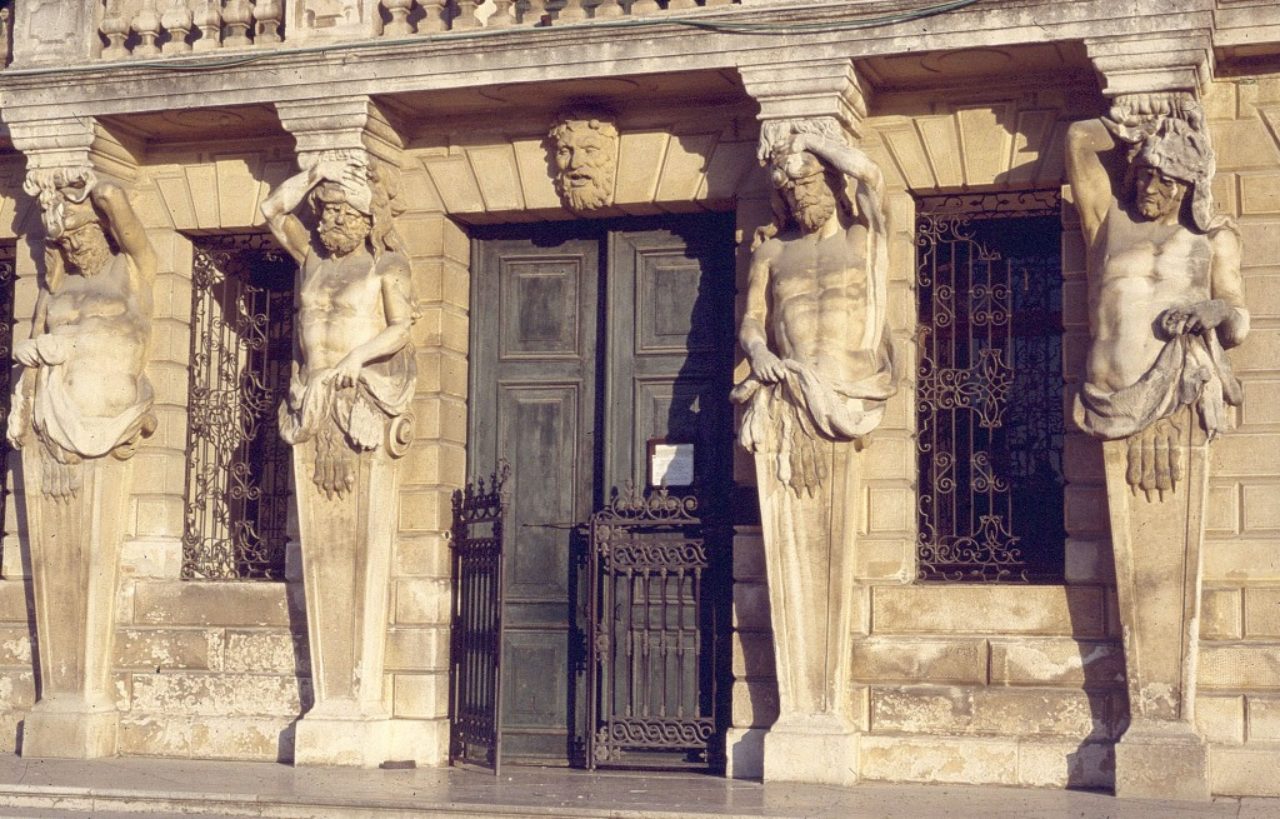 Even more amusing terms doubling as Atlantes (or vice- versa) are found on the courtyard fountain of the 17th-century Palazzo Mirto in Palermo.  With their sagging bellies, the Mirto terms spring from applied pedestals decorated with real shells--an authentically Rococo touch. In their role as Atlantes, these jolly figures raise their arms to support the projecting cornice sections. (Fig. 11) 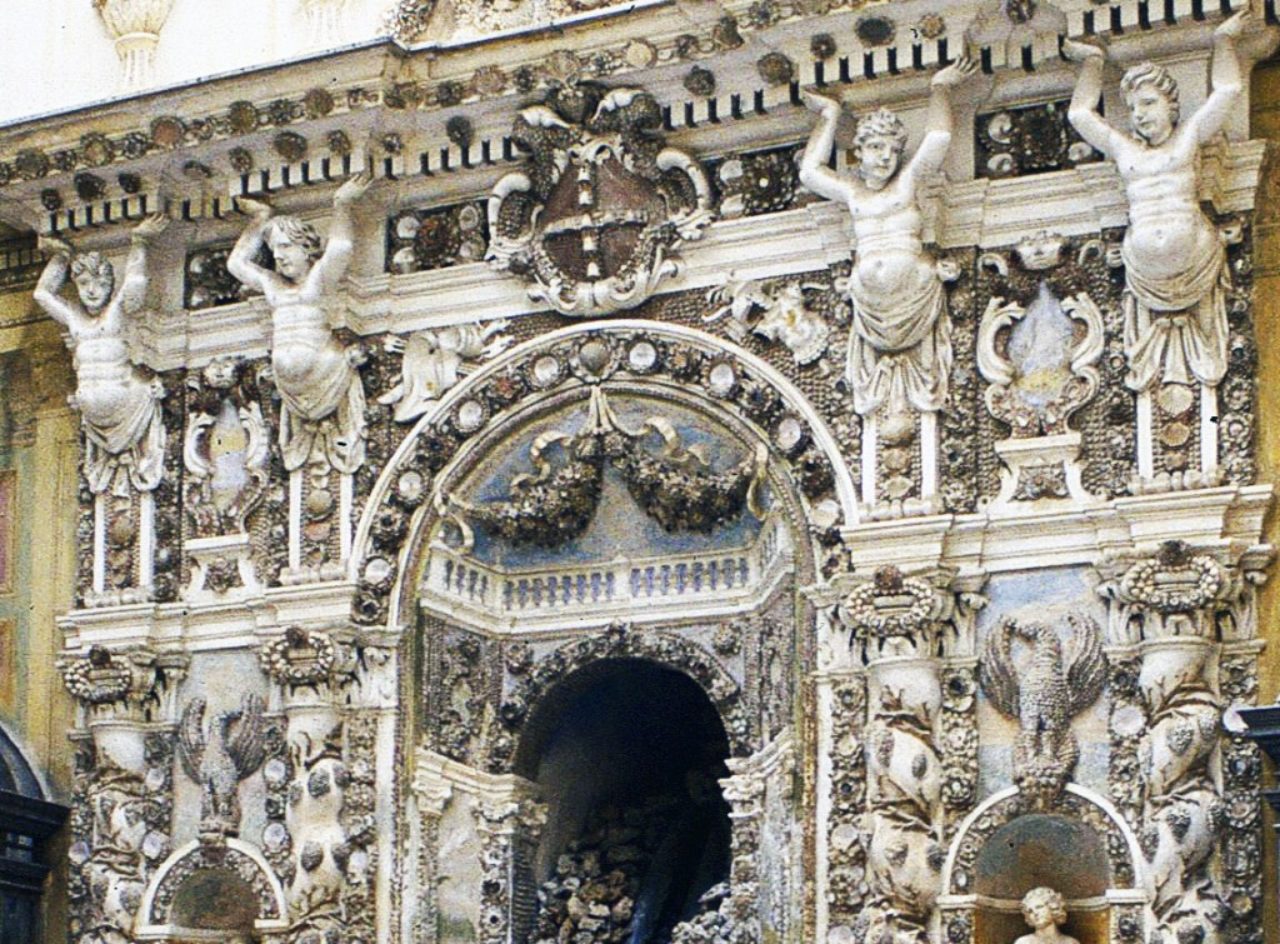 Our ongoing search for American Atlantes leads us to a similar combination of Atlantes and terms, but a more sober one. High on the pavilions of the Library of Congress, the architectural extravaganza of Smithmyer and Pelz, we see tautly muscled figures whom we might assume to be authentic full-bodied Atlantes supporting the segmental pediments. Closer inspection reveals that behind the railings, the figures’ lower extremities are indeed downward tapered pedestals, not pairs of legs. (Fig. 12) 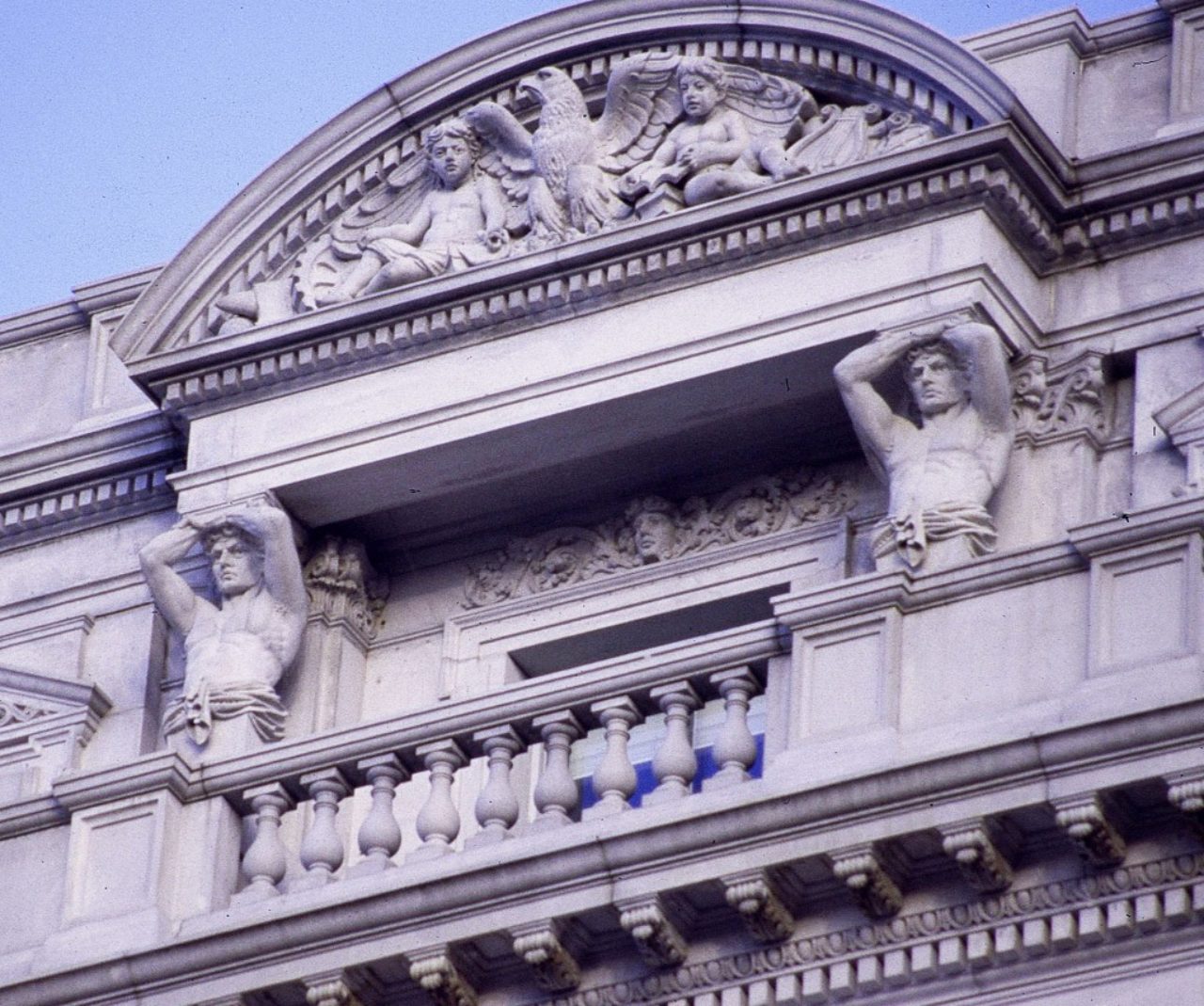 While Telamones, and Atlantes, and even terms are rare in his country, we do have representations of Atlas as an independent sculptural figure rather than as an integrated architectural embellishment.  One of America’s most famous free-standing Atlas figures supports the clock over the entrance of the Tiffany & Co. building on New York’s Fifth Avenue. (Fig.13) The composition works so well with the Art Deco façade that it’s easy to assume that it was made for the building. Remarkably, the nine-foot Atlas and his four-foot-diameter clock date from 1853, and were commissioned for one of the firm’s earlier buildings. It was later moved from its original site on Broadway to the firm’s McKim, Mead and White building on Fifth Avenue, and finally to its present location in 1940. The Atlas is wood painted to resemble bronze and was crafted by Henry Frederick Metzler, a carver of ship figureheads.  Atlas and his clock have since become a Tiffany trademark and versions of the composition adorn many of the company’s stores throughout America, including Philadelphia, Seattle, Portland, Los Angles, Palm Beach, and Houston. 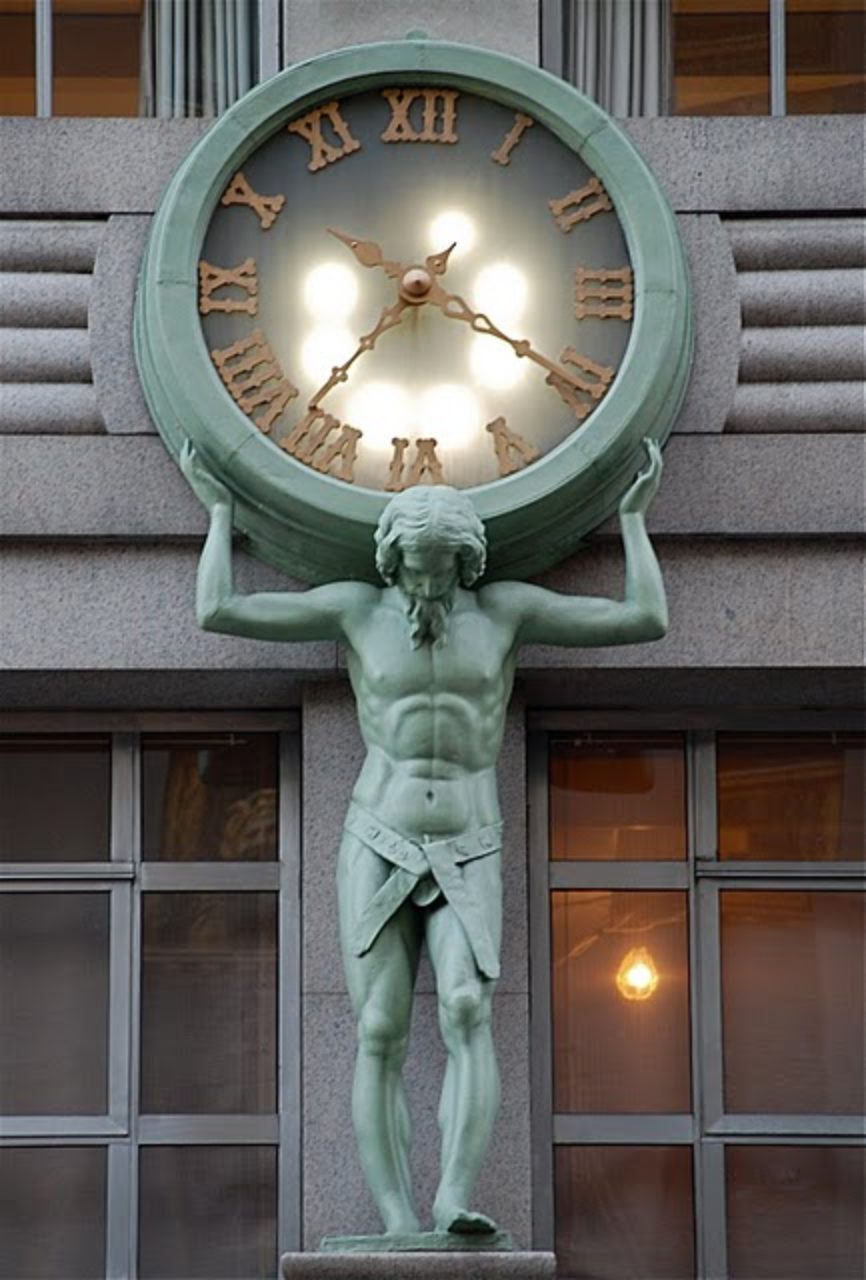 America’s best known 20th-century sculpture of Atlas serves as a focal point in New York’s Rockefeller Center. Cast in 1936, Lee Lawrie’s prodigious bronze image of Atlas carrying the celestial spheres on his broad shoulders is admired by thousands of visitors. In keeping with the style of the surrounding complex, Lawrie depicted Atlas in stylized Art Deco fashion rather than as a conventional classical deity. (Fig. 14) In contrast to the ancient Farnese Atlas, which appears crushed by the weight of the heavens, the Rockefeller Center Atlas carries the cosmos with the energy and agility of an Olympic weightlifter. 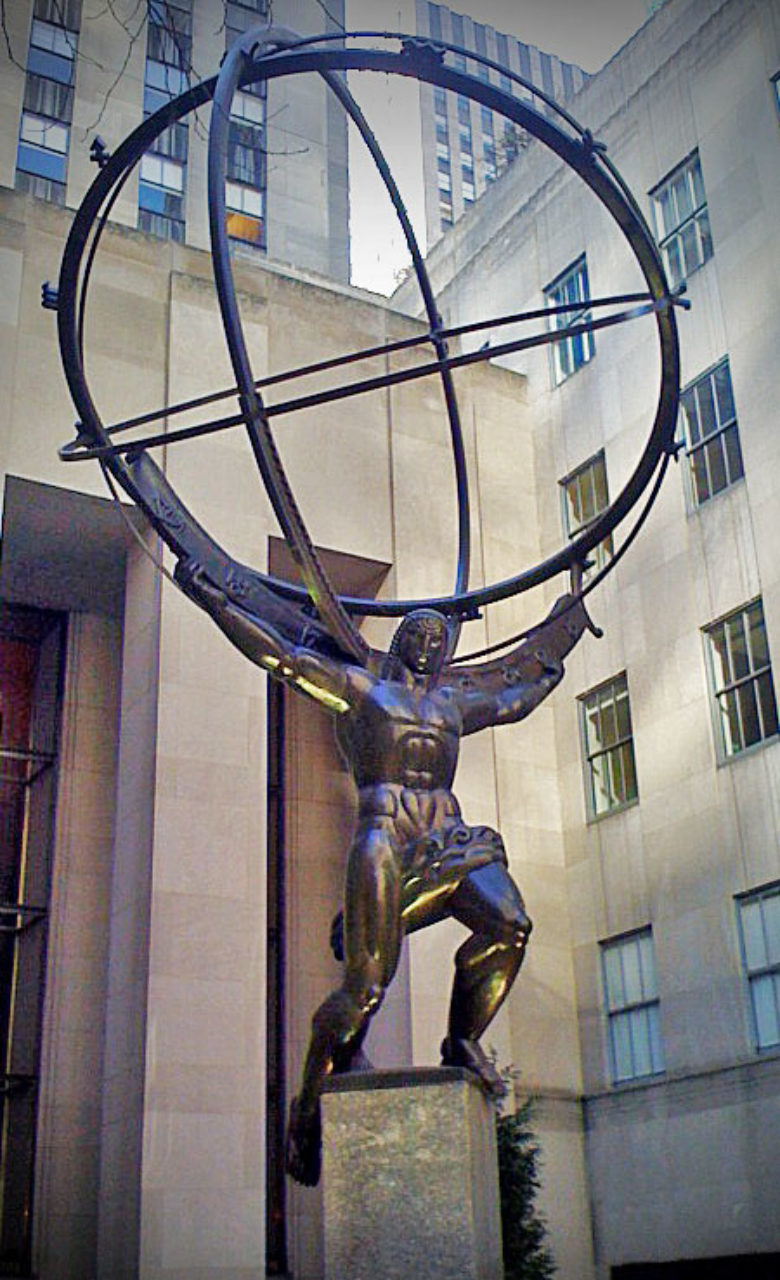 We might ask whether Telamones and Atlantes have any role in today’s architecture. We also might ask: why not? Human figures in many forms have been key adornments for architecture throughout the ages. Modern versions of Telamones and Atlantes should not be excluded from the architectural palette. Architect Michael Graves drew on this tradition in his design for the 1991 Team Disney Building in Burbank, California. Honoring the Disney theme, Graves’s  ‘Atlantes’ are Snow White’s Seven Dwarfs. (Fig. 15) 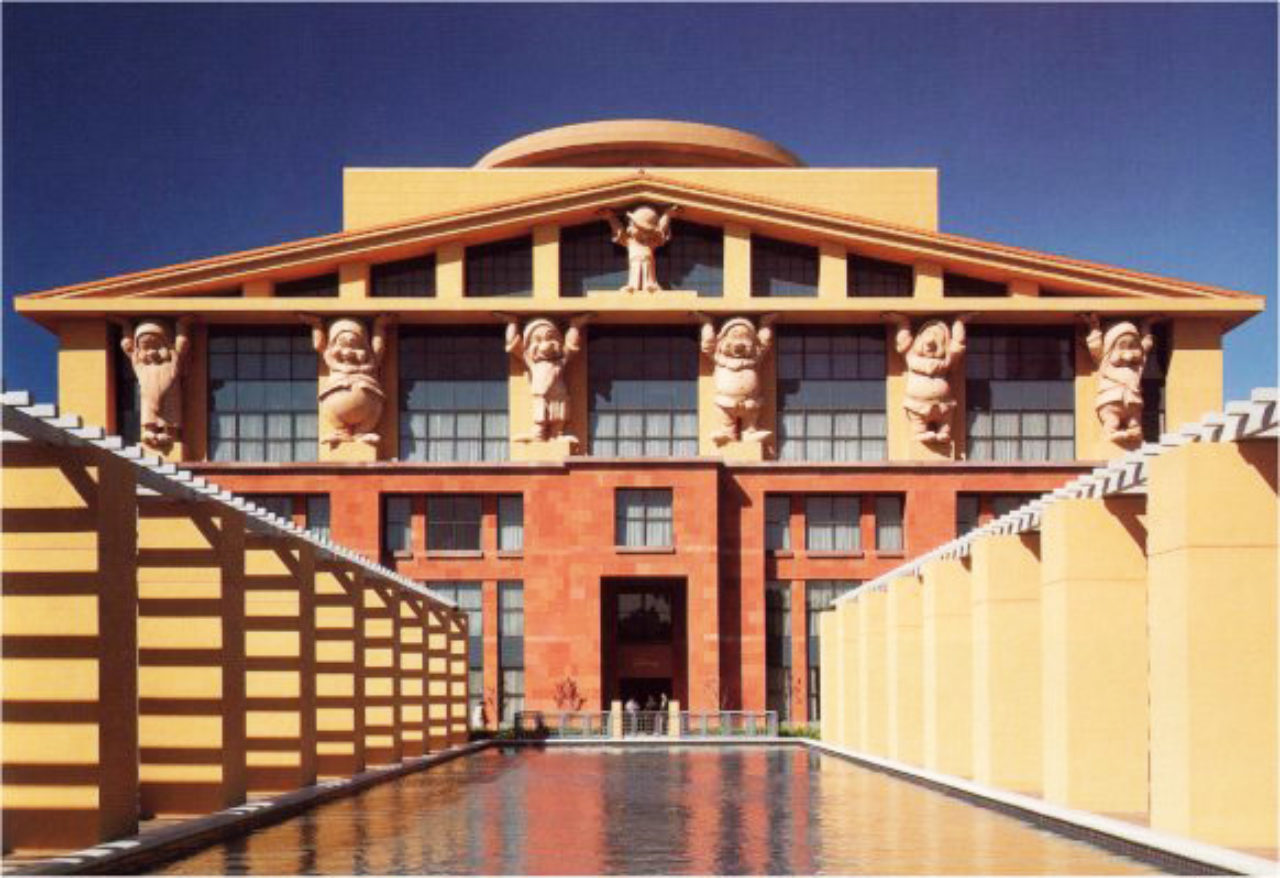 Readers are invited to share other examples of modern-day Telamones or Atlantes.

[i] Some architectural dictionaries and writings consider Telamones and Atlantes synonymous.
[ii] Greek mythologies are complicated and confusing, and thus don’t necessarily agree on the origin of the name of the Atlantic Ocean.
[iii] It is named the Farnese Atlas because it was in the collection of the Farneses, a famous Italian Renaissance family.
[iv] The spherical shape of the cosmos in this and similar sculptures have led people to believe that Atlas was holding up the world rather than the heavens. This, of course, could not be the case since a globe-shaped earth was unknown to the ancients.
[v] The current figures on the Erechtheum are casts. The originals, except for one, are now exhibited in the new Acropolis Museum in Athens. The sixth Caryatid was removed by Lord Elgin in the early 19th century and is displayed in the British Museum, London.
[vi] Alexander Milne Calder was the grandfather of the more famous Alexander Calder, the modernist sculptor, noted for his mobiles.