The Choragic Monument of Thrasyllus

The diminutive Choragic Monument of Thrasyllus has served as a design source for classical buildings throughout the western world. Originally situated on the south face of the Acropolis, the monument was constructed in 320 B.C. as a façade fronting a shallow cave or grotto halfway up the cliff. (Fig. 1) Thrasyllus was an ancient Greek chorus leader. According to its inscriptions, the monument commemorated the victory of Thrasyllus’s chorus during a festival performance. The trophy given in such contests was a bronze tripod. The tripod in this case is believed to have been affixed to the lap of the statue seated on the parapet.[i] 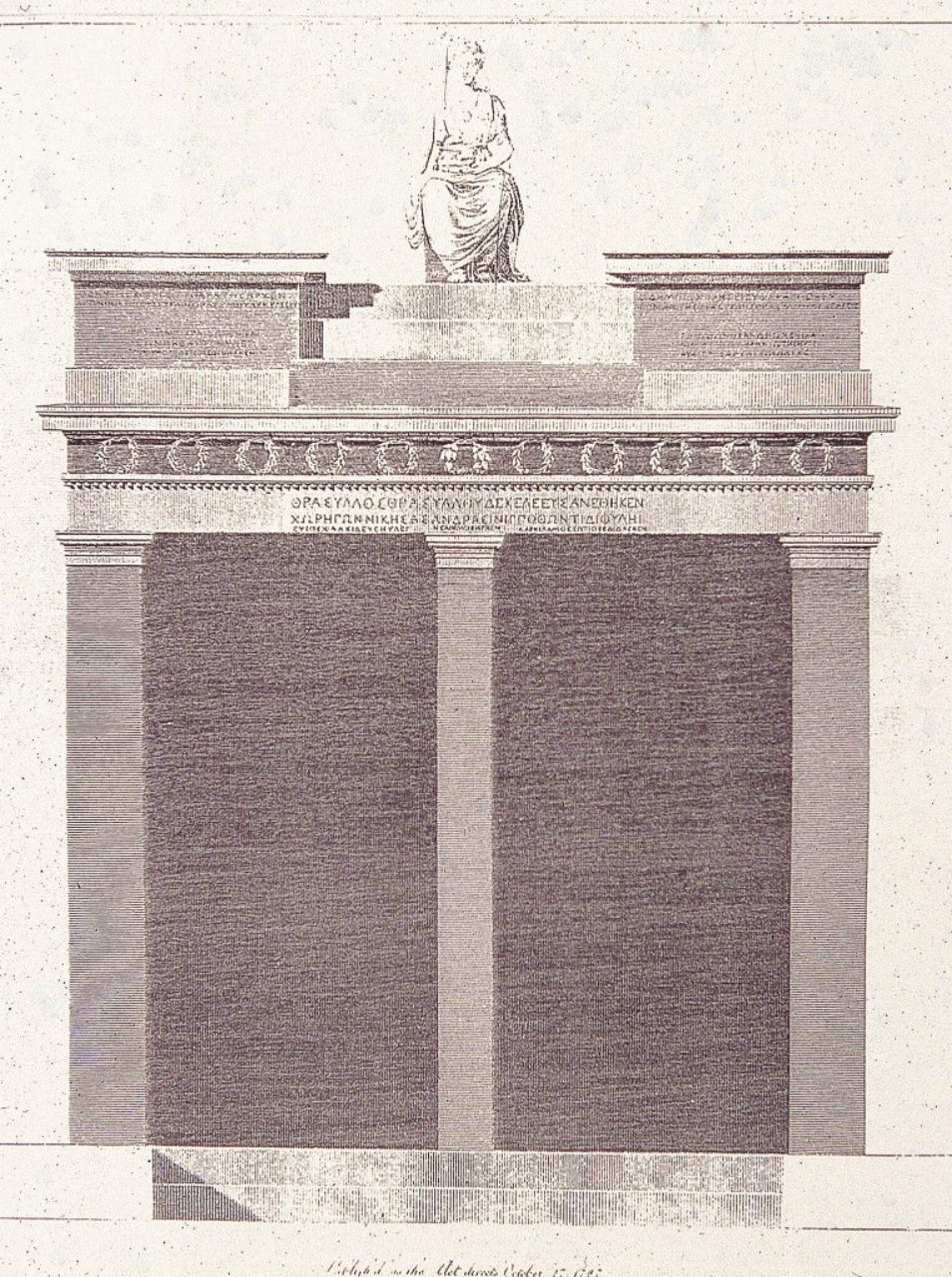 The monument was in ruinous condition in the 1750s when James Stuart and Nicholas Revett recorded it for their restoration drawings in Volume II (published in 1789) of their famous work, The Antiquities of Athens. The Turks destroyed the monument when they besieged the Acropolis in 1826-27, during the Greek war for independence. Prior to its obliteration the monument’s bays had been walled up to create a small church known as the Holy Virgin of the Grotto. The site today consists only of the cave and some fragments of the monument’s base. (Fig.2) The view of site shows some conservation work underway; the Parthenon is seen peeping over the crest of the hill. 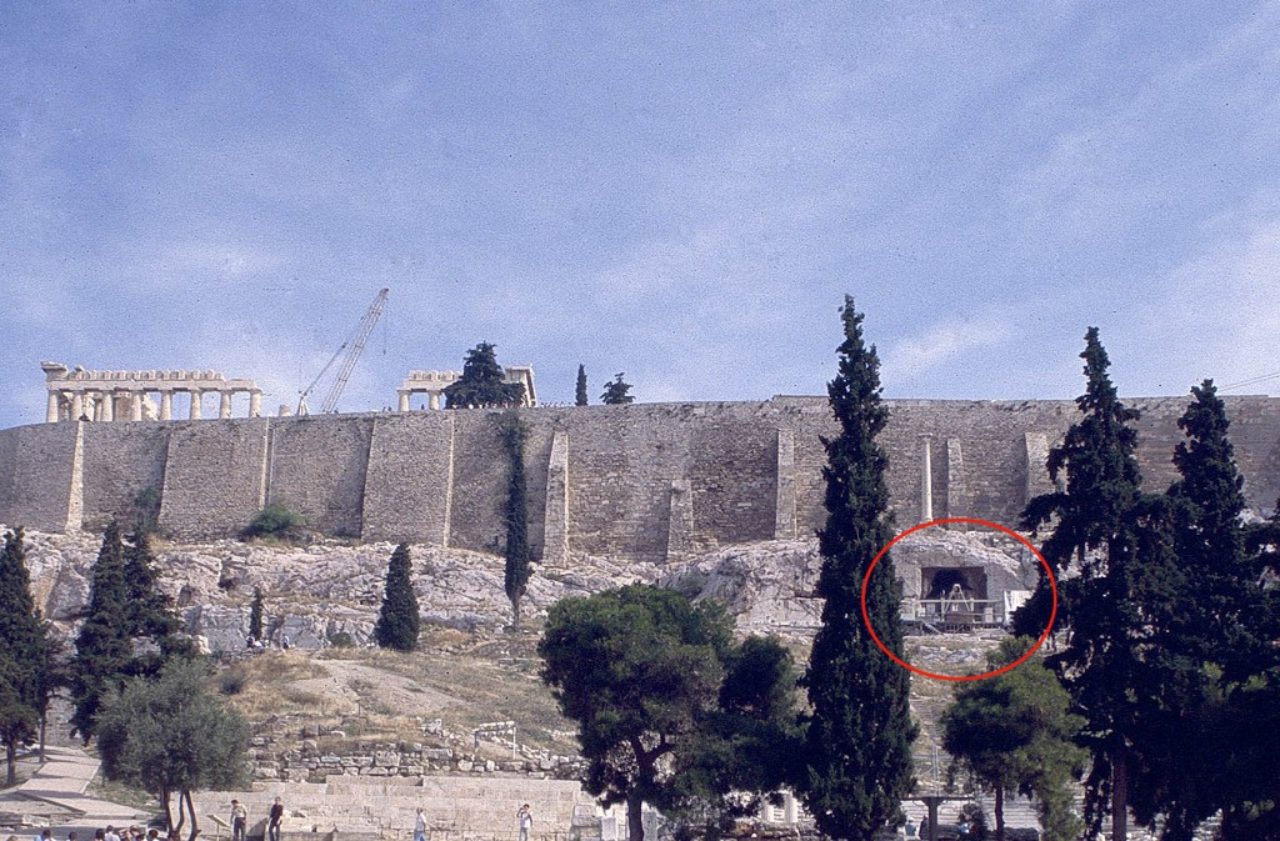 Stuart and Revett’s restoration drawing shown in Figure 1 depicts the monument consisting of an entablature supported on two square antae and a thinner freestanding central pier. Topping the entablature is a tall parapet interrupted in the middle by three steps. The entablature and anta capital seen in Stuart and Revett’s detail illustration have unique characteristics. (Fig. 3) The anta capital is a simplified, albeit highly refined version of the Greek Doric order. In place of triglyphs, the entablature's frieze is decorated with a series of olive wreaths--the olive wreath being an ancient Greek symbol of victory, such as was awarded to the winners of events in the Olympic Games.  Attached to the underside of the taenia (the band between the frieze and architrave) is row of cylindrical guttae.[ii] With perhaps one exception[iii], the so-called ‘taenia with continuous guttae’ is unique to the Thrasyllus monument. Through Stuart and Revett’s illustrations, the taenia with continuous guttae has been a remarkably popular device for architects and builders ever since. Hundreds of variations on this as well as other elements of the monument exist throughout Europe and America. 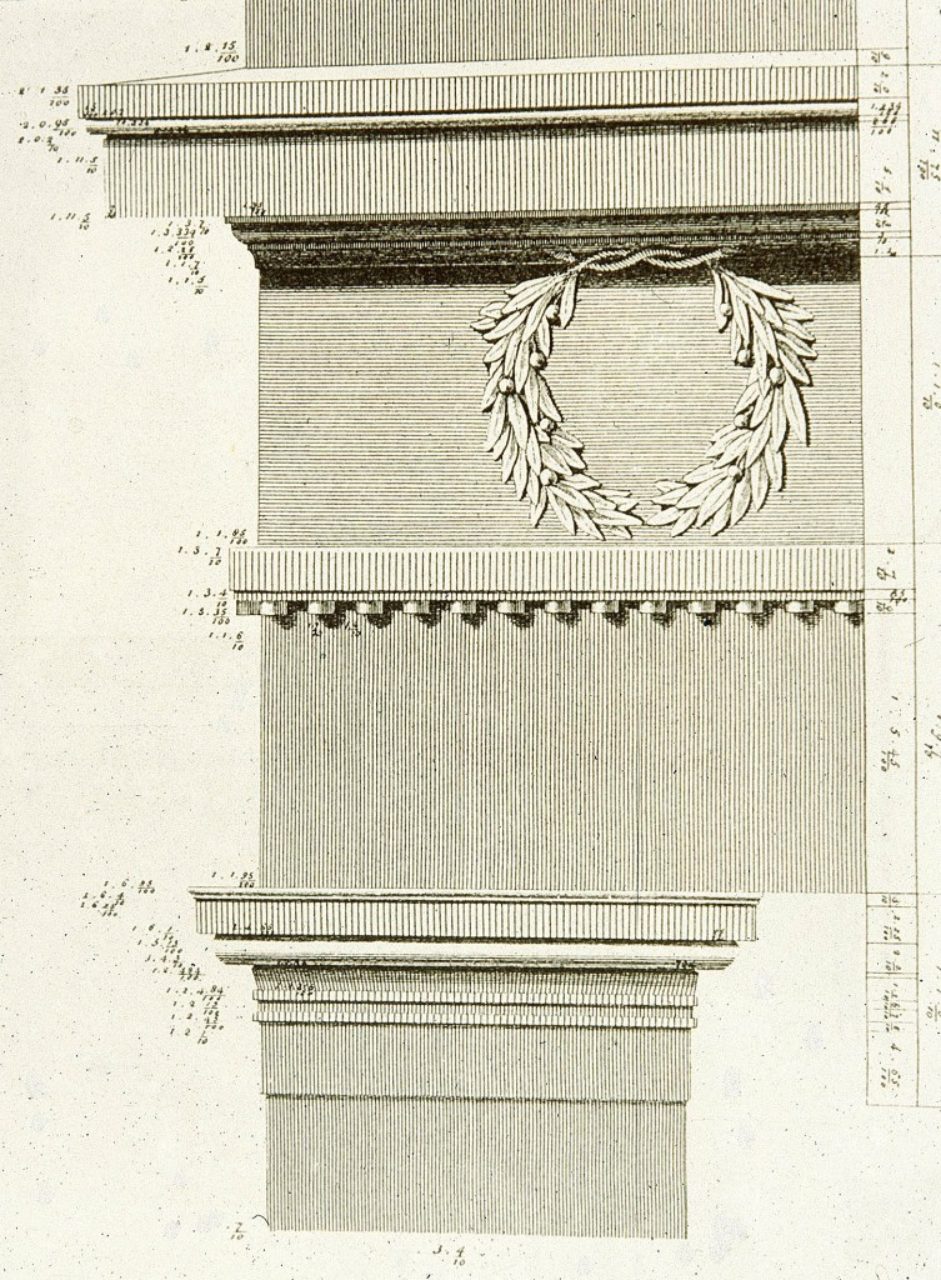 One of the earliest and most conspicuous adaptations of these Thrasyllus motifs is the found in the Rotunda of the United States Capitol, a space designed by Charles Bulfinch and completed in 1829. (Fig. 4)[iv] The Rotunda’s entablature displays a taenia with continuous guttae, although the guttae here are conical Roman-style guttae rather than Greek cylindrical guttae. Also, Bulfinch switched species for his wreaths. Instead of olive leaves, the wreaths have oak leaves and acorns, perhaps acknowledging that the oak is an ancient symbol of strength and endurance. 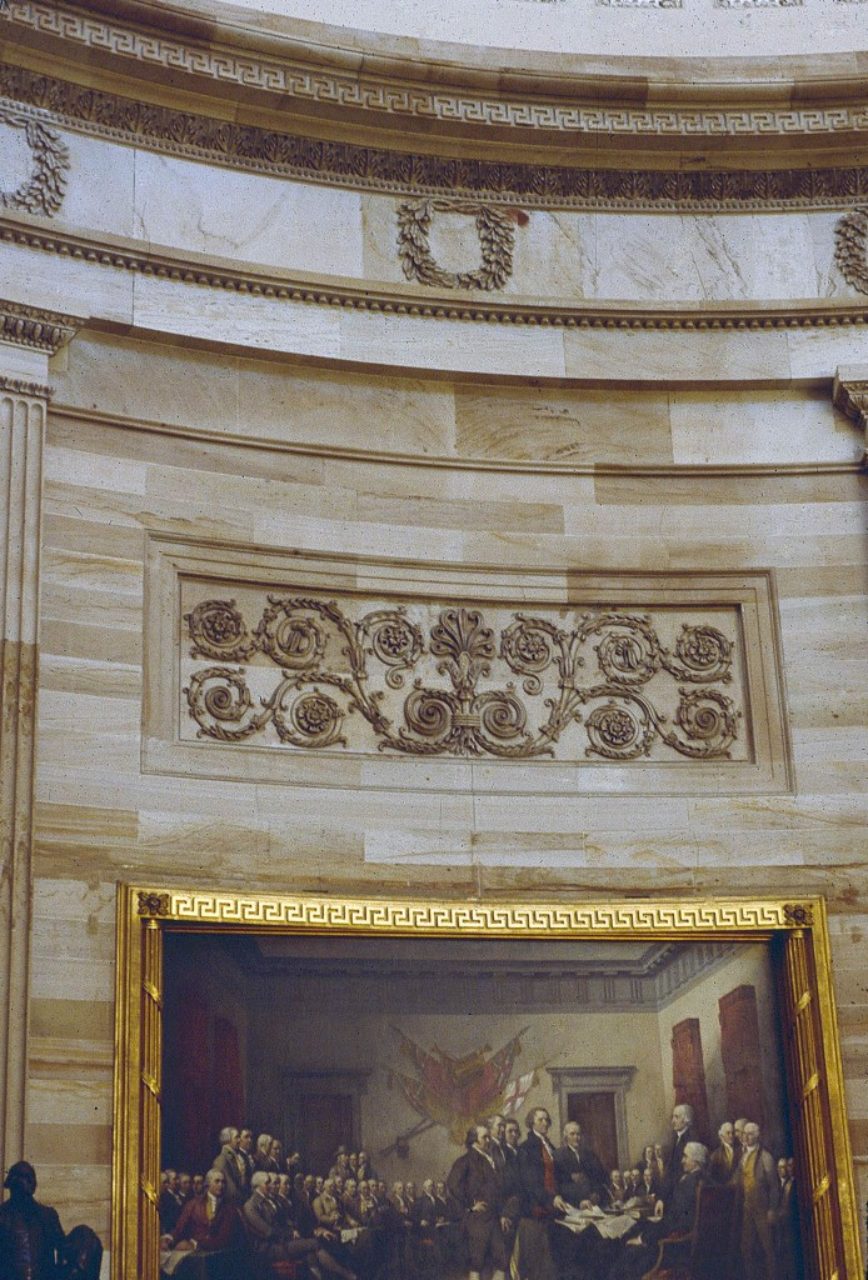 A century later, at the opposite end of the Mall, architect Henry Bacon incorporated Thrasyllus motifs into the entablature of the Lincoln Memorial. (Fig. 5)  Although the memorial’s peripteral colonnade is the Doric of the Parthenon, Bacon eliminated triglyphs and metopes from the frieze and decorated it instead with the names of the states framed by pairs of overlapping wreaths. One of the wreaths in each pair has sculpted pinecones. Beneath the frieze is the now-familiar taenia with continuous guttae. 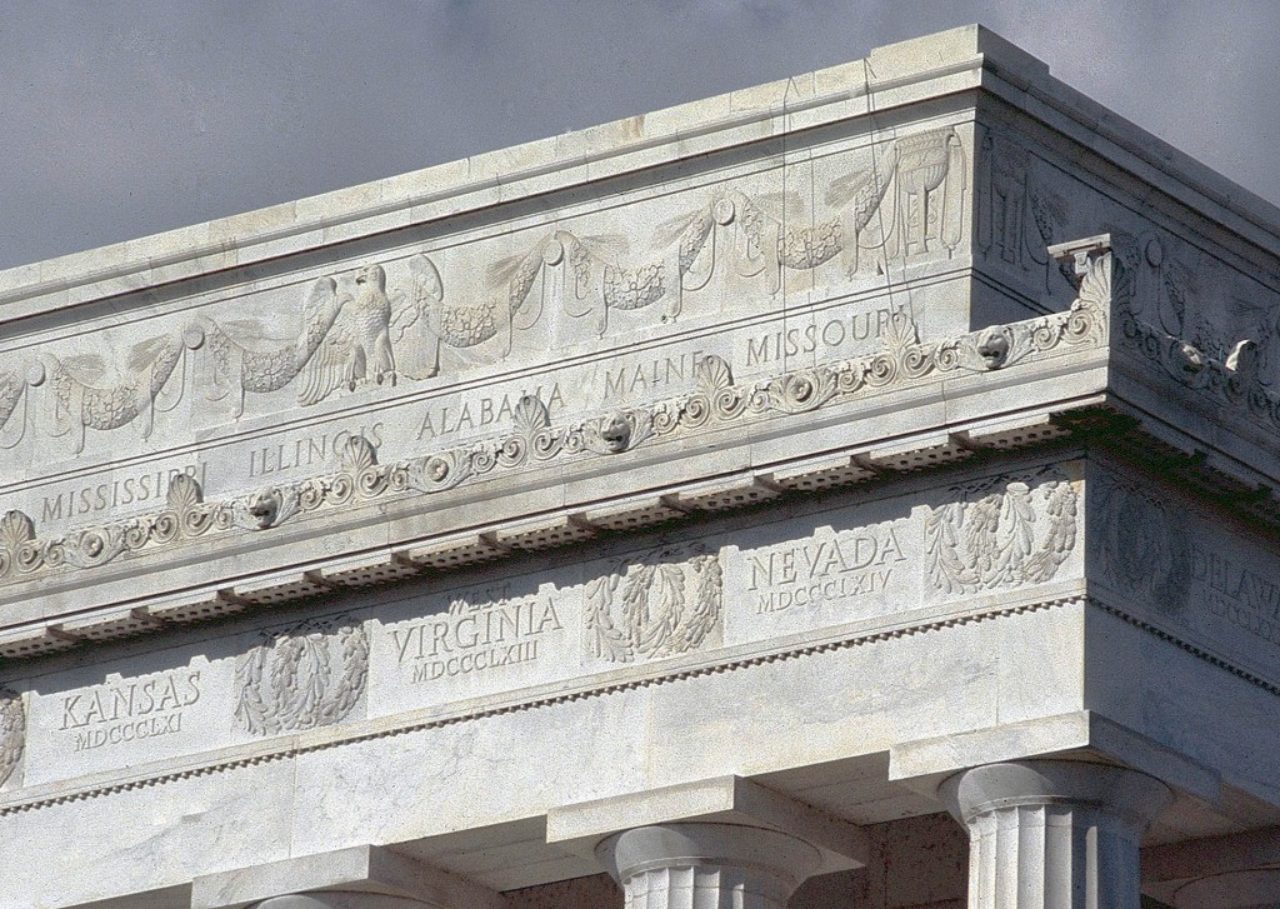 The 19th-century Prussian architect, Karl Friedrich Schinkel, was a leading advocate of the Grecian mode and integrated Thrasyllus motifs into several of his works, including the Neue Wache and the Schauspielhaus in Berlin, and Potsdam’s Charlottenhof Palace.  The square piers separating the many windows of the Schauspielhaus are modeled after the Thrasyllus pier and antae. As we see in the Charlottenhof Palace portico, Schinkel based his entablature on the Thrasyllus monument, but gave extra-wide spacing to both the guttae and the wreaths. (Fig. 6) 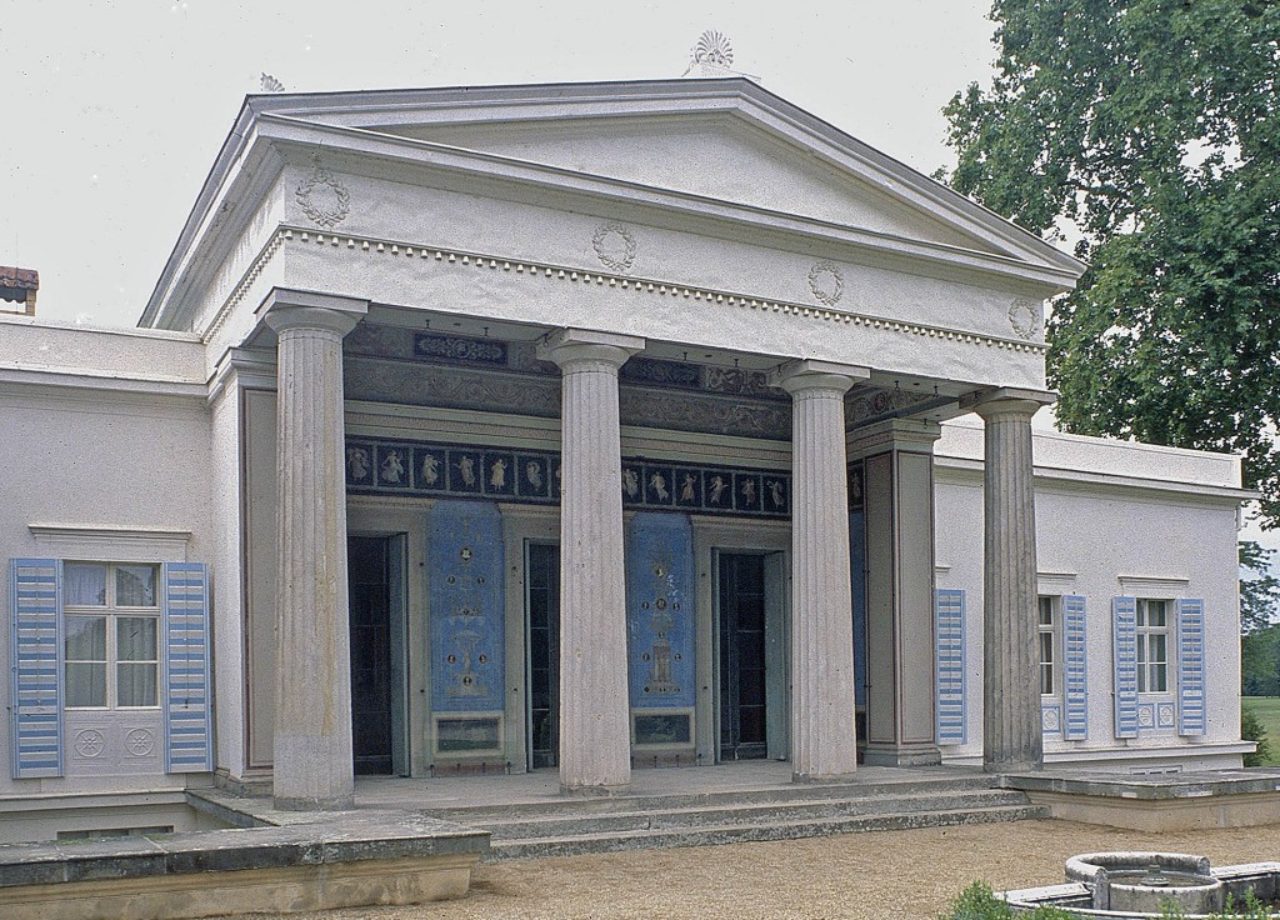 One of Schinkel’s pupils, Carl Friedrich Reichardt, worked in Charleston, South Carolina from 1836 to 1840. His only surviving design there is the ground-floor façade of the former South-Western Rail Road Bank Building of ca. 1838.[v] (Fig. 7) Reichardt continued his mentor’s penchant for the Thrasyllus model by adding the wreaths and the taenia with continuous guttae in the bank’s pedimented entrance bay, all executed in gray granite. The pilaster caps in the flanking bays follow those on the Thrasyllus monument. 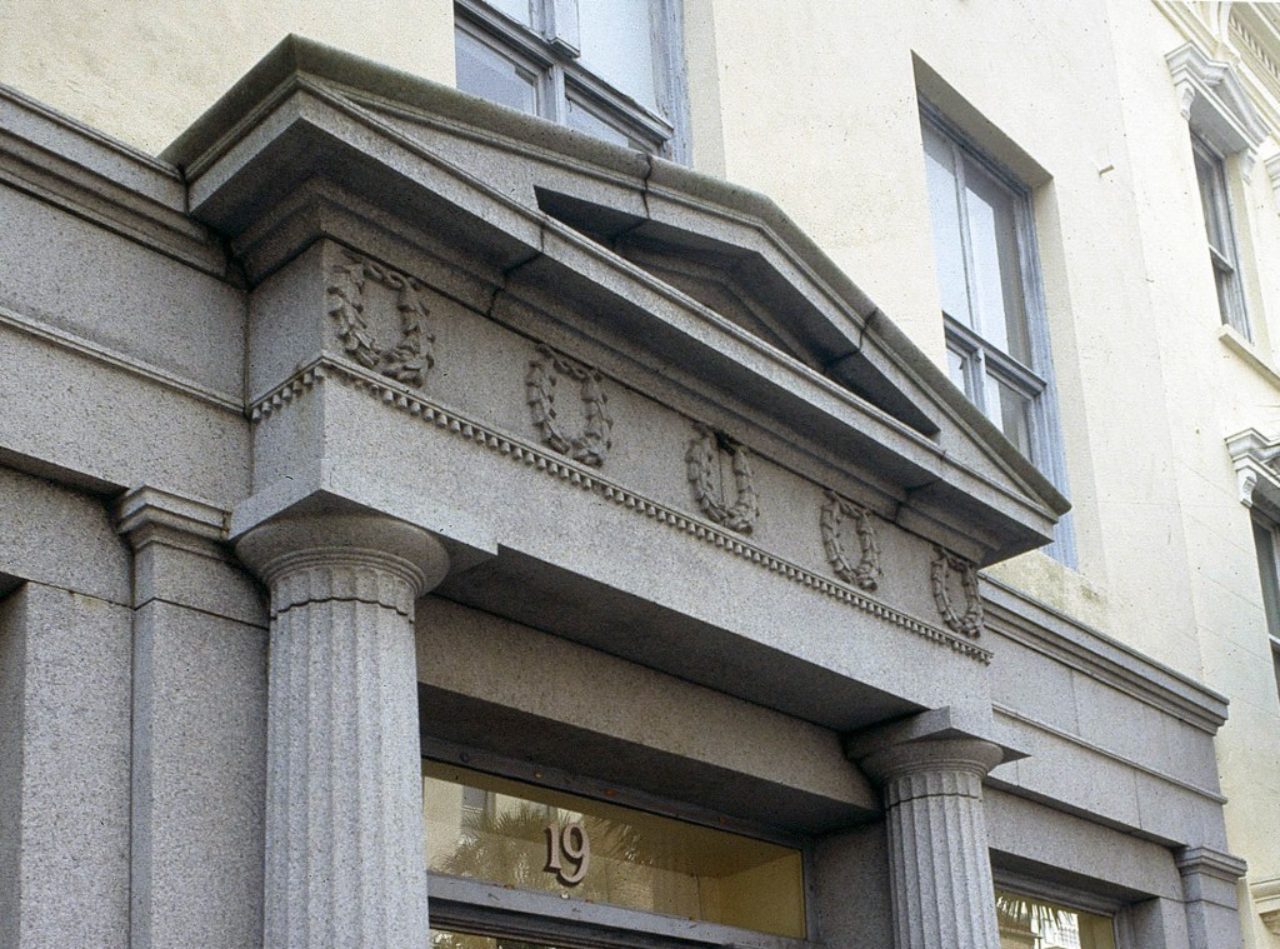 Schinkel’s contemporary, the Munich architect, Leo von Klenze, decorated his famous Atlantes porch on the Hermitage Museum in St. Petersburg with a variation on the Thrasyllus theme. (Fig. 8) Completed in 1851, it has Thrasyllus-type piers framing the huge granite atlantes.[vi] The entablature’s continuous guttae, however, are square rather than cylindrical, more resembling dentils--a common variation. Likewise, the Hermitage wreaths are more stylized, and appear to use bay leaves rather than olive leaves. 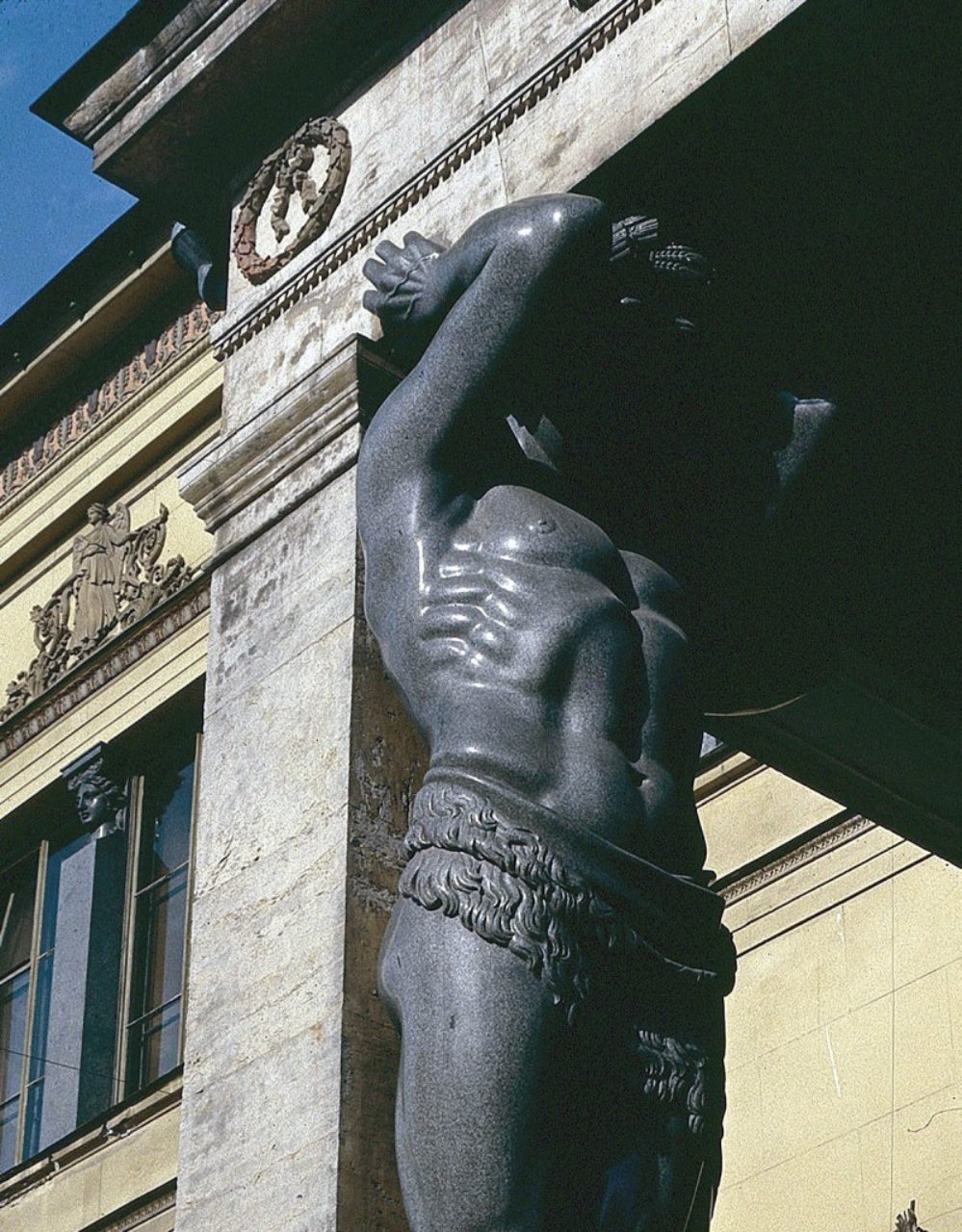 Several mid-19th-century American pattern-book authors, including Asher Benjamin, Minard LaFever, and Edward Shaw, published designs incorporating Thrasyllus elements. Compositions such as Asher Benjamin’s frontispiece appearing in The Architect or Complete Builder’s Guide of 1845, helped popularize Thrasyllus motifs for a national audience. (Fig. 9) Consequently, one can find elements of the Thrasyllus monument decorating doorways, porches and porticos throughout the country. Typical is the dwarf portico on a Greek Revival town house in Richmond, Virginia. (Fig. 10) Here we see the familiar taenia with continuous guttae as well as pilaster caps closely modeled on the Thrasyllus antae capitals. Of course, such adaptations for dwellings were not limited to the United States. Strolling the streets of London can lead to numerous encounters with Thrasyllus features, as we see on the elegant entrance to a 19th-century terrace house in Westminster. (Fig. 11) 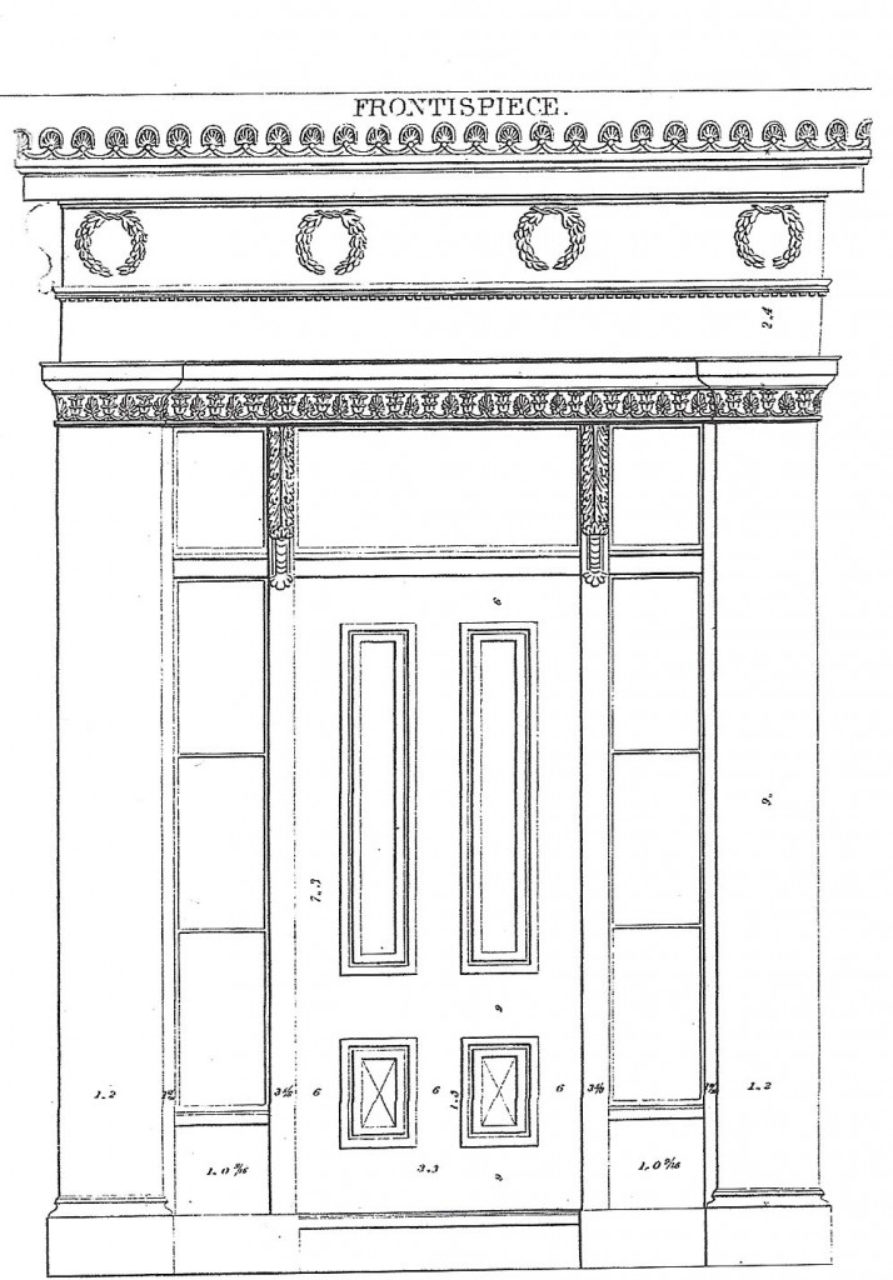 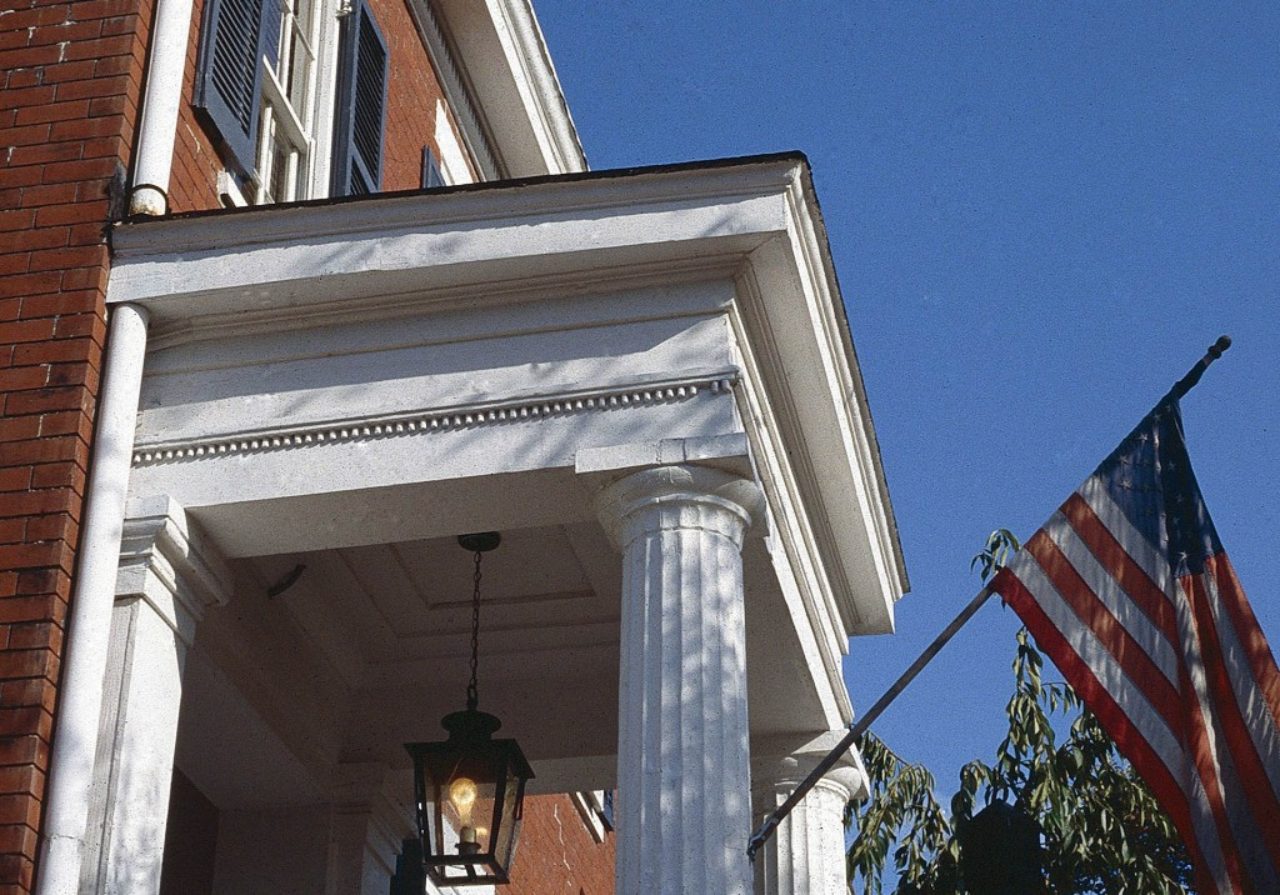 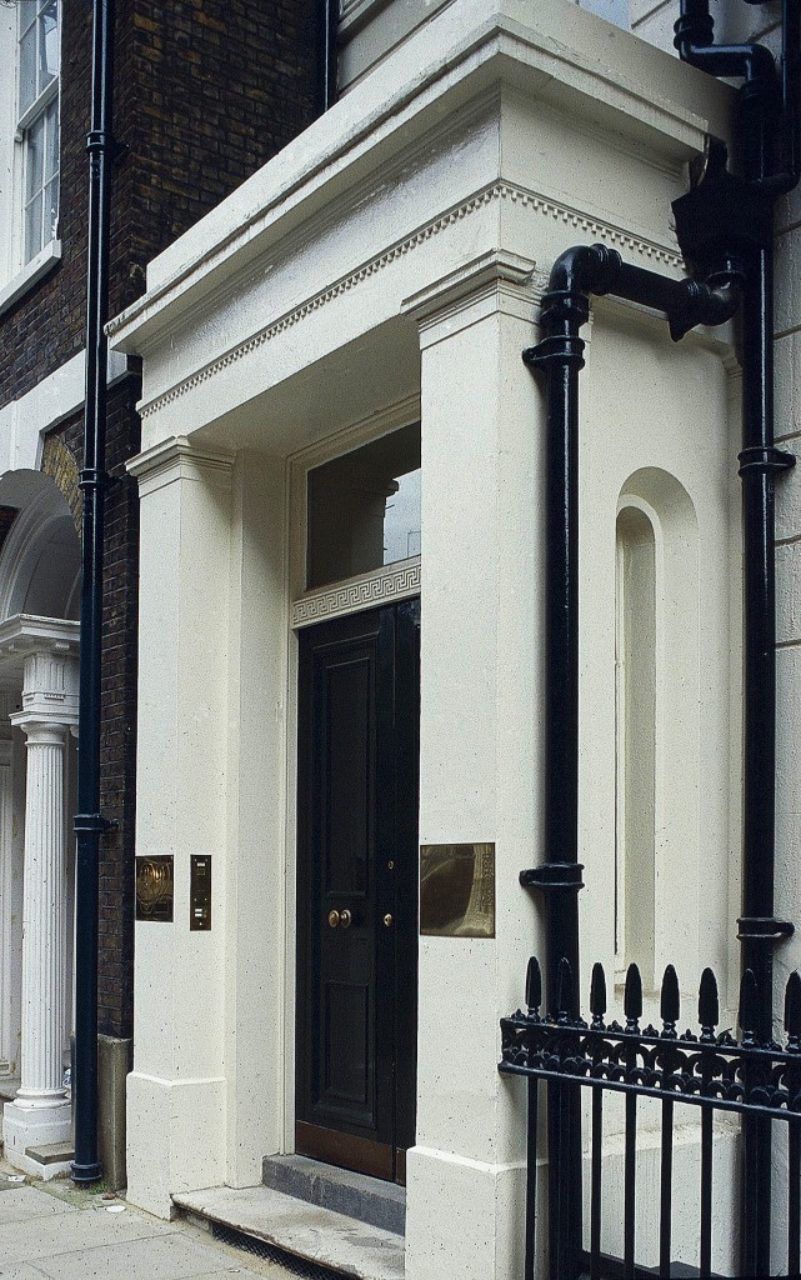 One of the beauties of classical design is that its elements can be successfully expanded or diminished to fit the scale of most any structure. The original overall height of the Thrasyllus monument was approximately twenty-nine feet. The scale was more than doubled in the side porticoes of Grange Park, the grand Greek Revival English country house designed by William Wilkins and completed ca. 1809. Wilkins’ interpretation of the Thrasyllus monument avoided the center pier in favor of two piers. In Grange Park’s entablature, Wilkins applied pairs of wreaths framed by triglyphs. Instead of a taenia with continuous guttae, he employed regulae with guttae for both the actual and implied triglyphs. To crown the composition, Wilkins added the distinctive Thrasyllus parapet with its central steps. (Fig. 12) 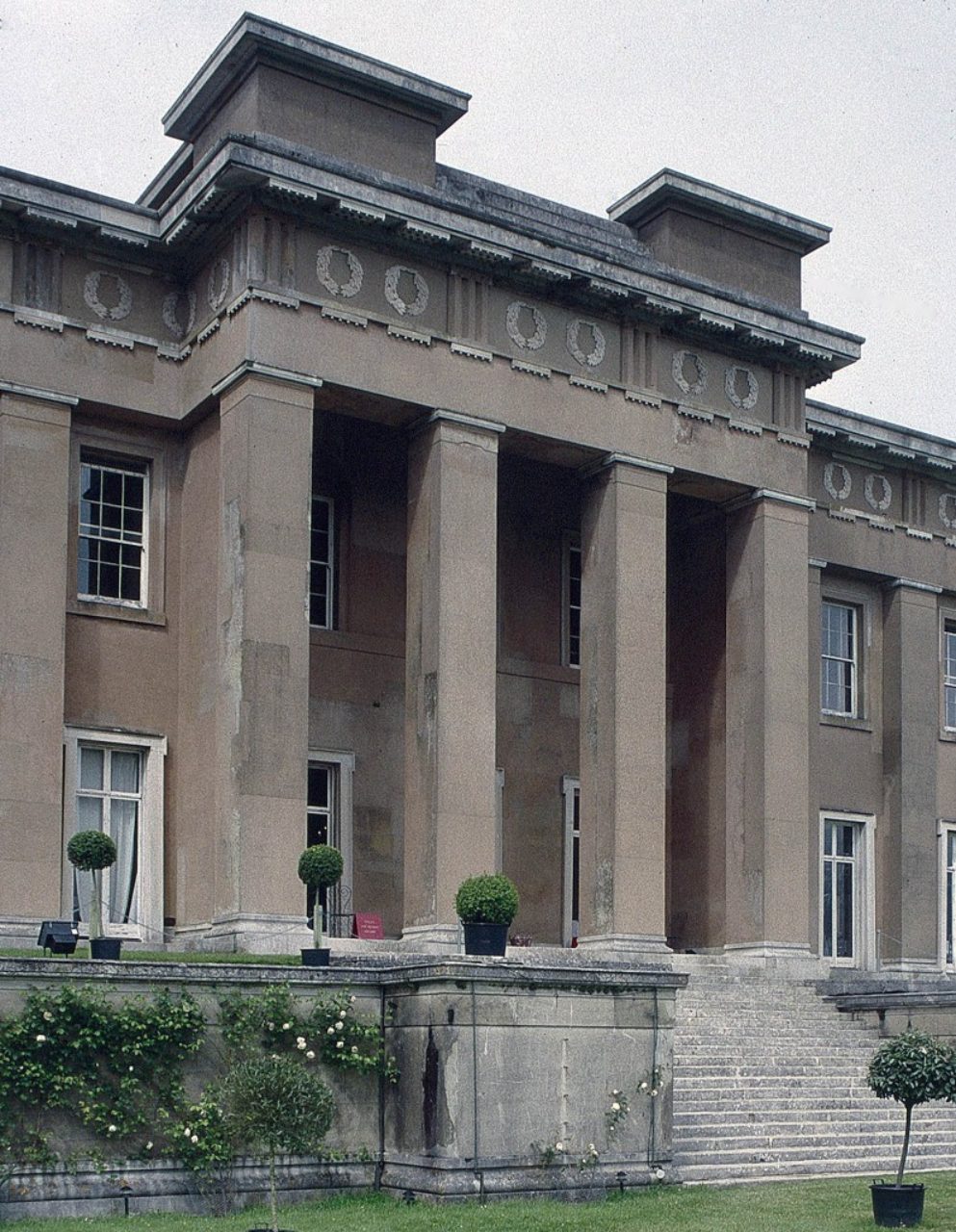 Contrasting with the prodigious Grange Park is Alexander Jackson Davis’s 1841 Temperance Temple at Bremo, a plantation in central Virginia.[vii] (Fig. 13) Located against the hillside, down from the 1817 Jeffersonian plantation house, the compact structure is half the size of the Thrasyllus monument. Like Wilkins, Davis eschewed the central pier, and supported the superstructure with a pair of Doric columns. Likewise, he used a standard Doric entablature with triglyphs and metopes. However, he was faithful to the Thrasyllus design in the temple’s parapet with its central three steps. 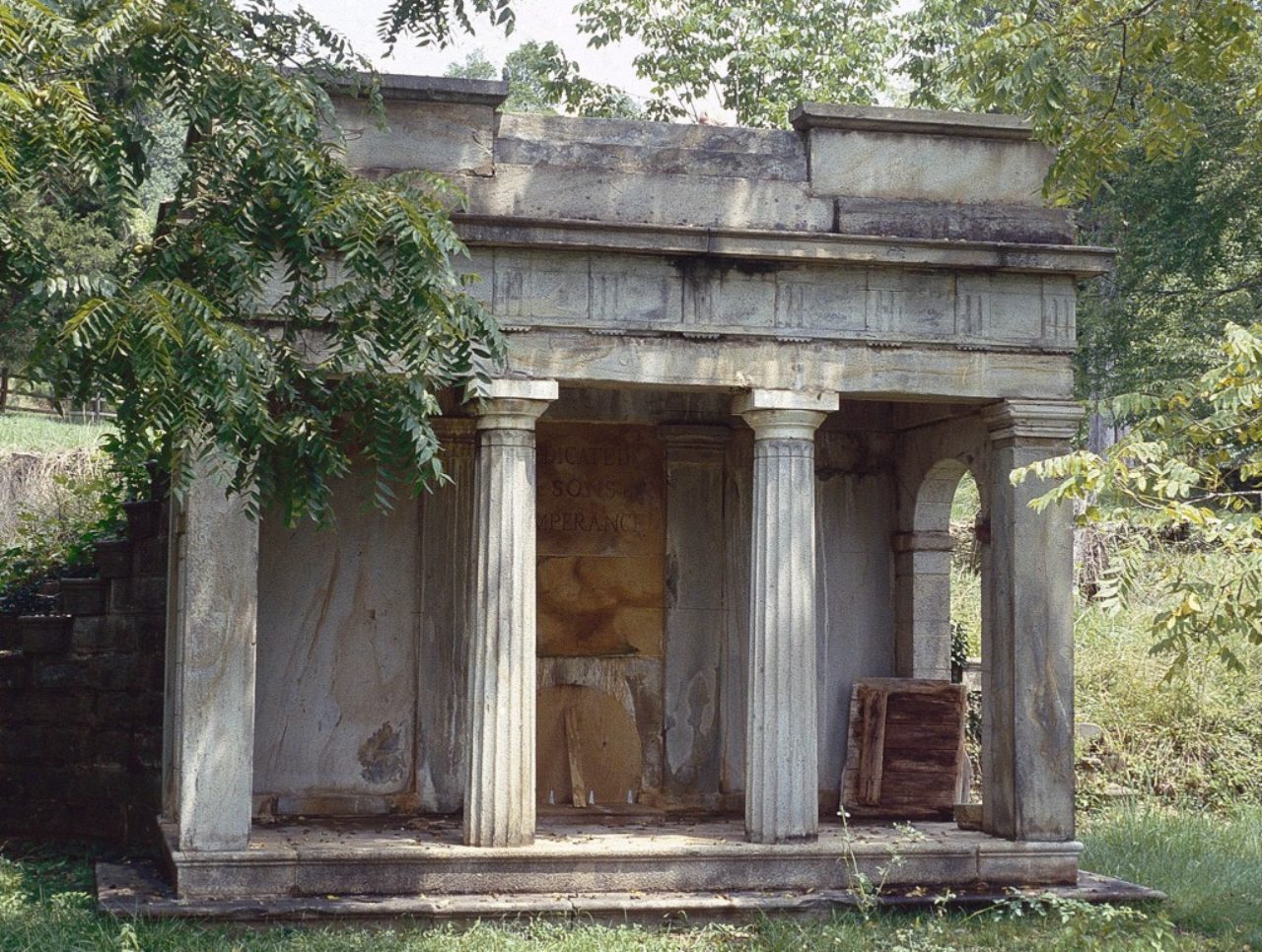 The Choragic Monument of Thrasyllus continues to be adaptable for modern works.  Richmond’s famous Monument Avenue had one remaining lot suitable for a new dwelling. The challenge was to complement the avenue’s historic buildings while introducing an entirely new work of architecture. Instead of insisting on Modernist infill,  the local Commission of Architectural Review approved a design by Richmond architect Henry Tenser for a traditional façade incorporating an entablature and parapet following the Thrasyllus precedent. (Fig. 14) The house was completed in 2006.[viii] 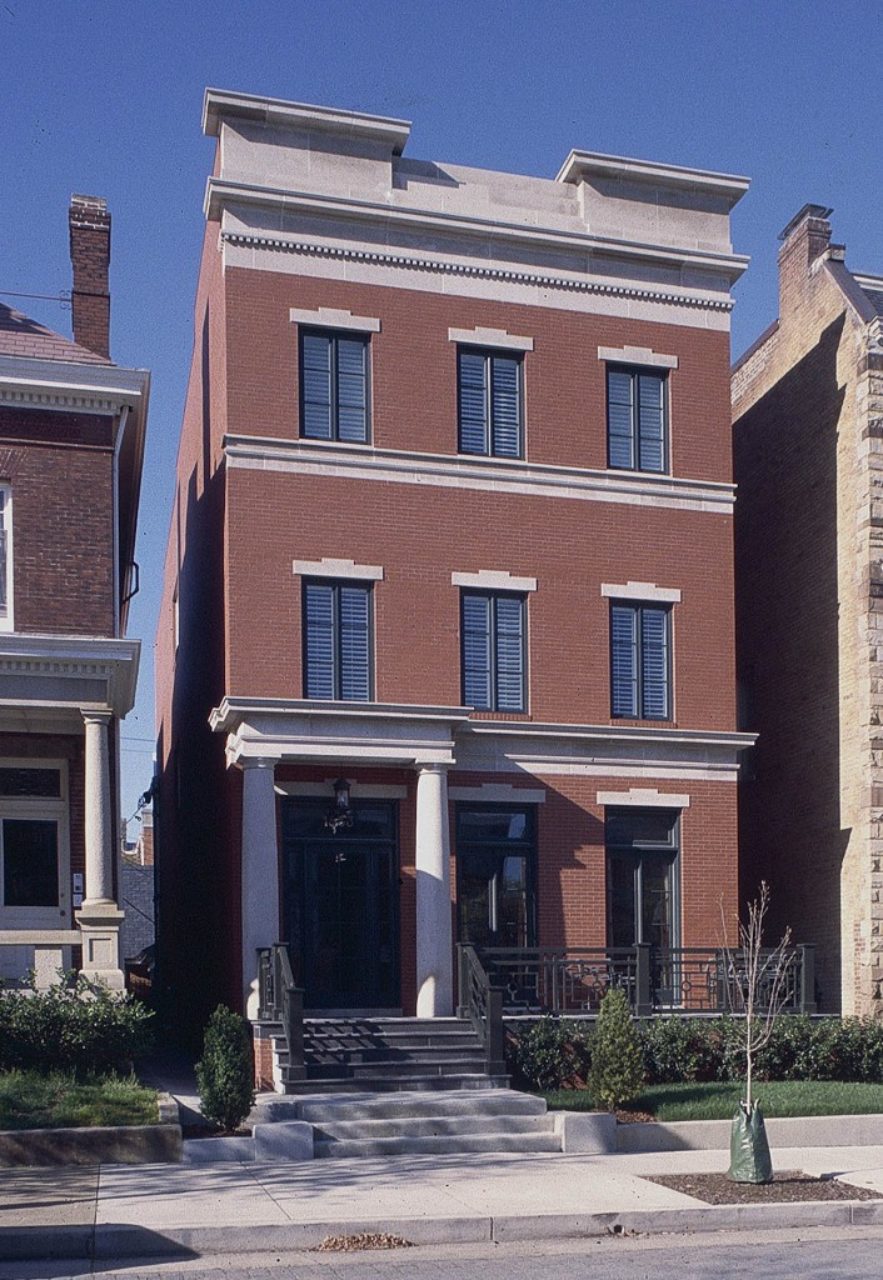 The Thrasyllus monument came into play once more with the design of the new visitors’ entrance to Thomas Jefferson’s Virginia State Capitol. (Fig. 15) Here, the project’s architect, George Skarmeas of the firm of RMJM Hillier, consciously referenced the Bremo Temperance Temple. Completed in 2007, the new entrance, like both the Bremo Temple and the Thrasyllus Monument, is built into the side of the hill and visually relates to the dominant classical structure above it. The entrance’s entablature employs implied triglyphs instead of the taenia with continuous guttae, but the parapet with its center steps follows the Bremo and Thrasyllus precedents. While some critics pressed for a scheme that was “of our time,” Skarmeas steadfastly maintained that the Bremo/Thrasyllus model was historically appropriate and aesthetically respectful of Jefferson’s capitol.[ix] 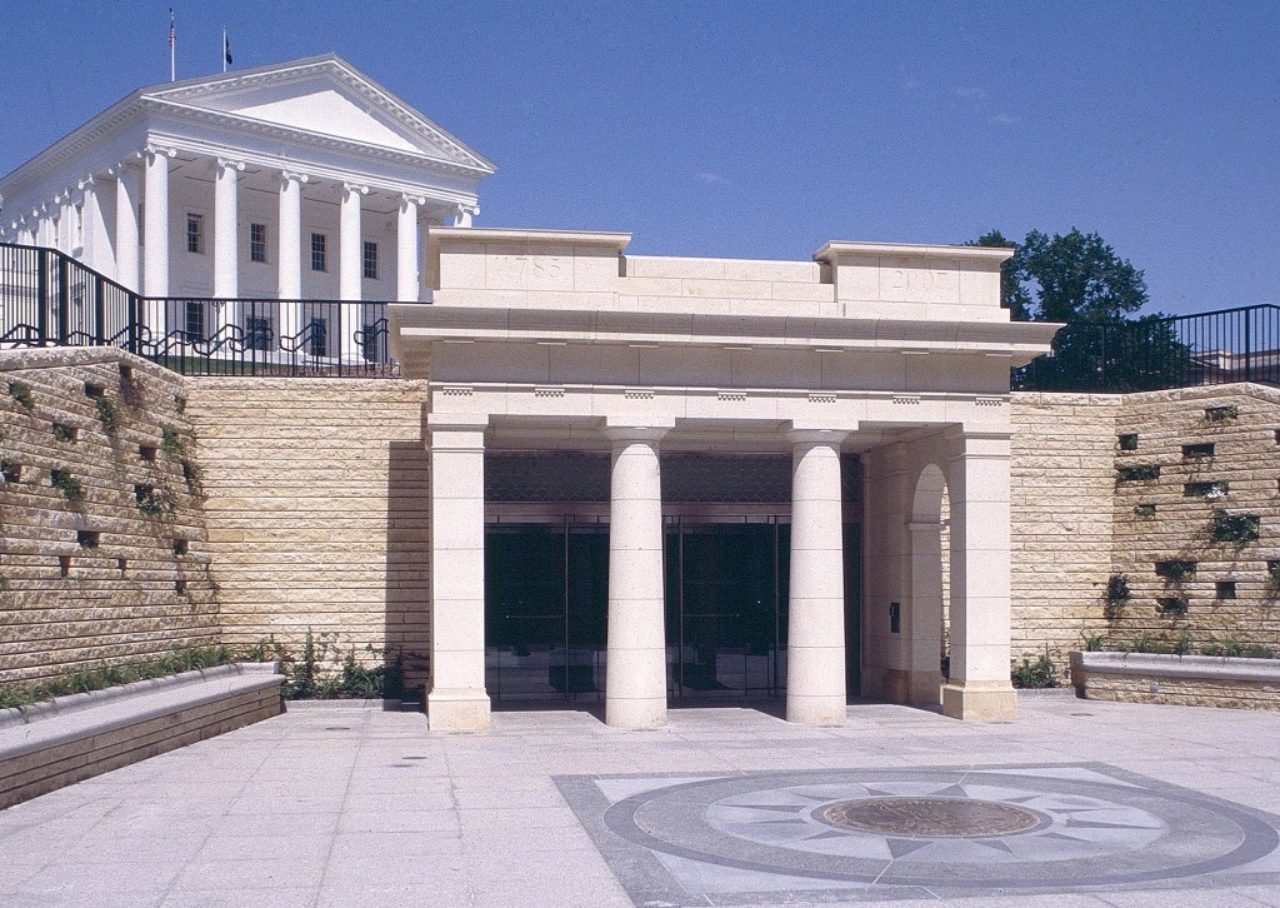 [i] The statue, lacking head and arms, is displayed among the Greek antiquities on the British Museum. Scholars are not in agreement on who the statue represents.
[ii] The term gutta (pl. guttae) is derived from the Latin word for a drop. It is a sculptural representation of a wooden peg.
[iii] A small stretch of taenia with continuous guttae exists on the south wing of the Propylaeum nearby. This detail was not recorded by Stuart and Revett.
[iv] The Capitol Rotunda was originally covered with a coffered saucer dome. The dome was replaced in the 1860s with the present cast-iron dome designed by Thomas U. Walter.
[v] Gene Waddell, Charleston Architecture, 1670-1860 (Wyrick & Company, 2003), pp 185-86.
[vi] Atlantes is the plural of atlas.
[vii] The temple’s patron, Gen. John Hartwell Cocke, owner of Bremo, was a leader in the 19th-century Temperance Movement and wanted to encourage travelers passing by on the adjacent canal to drink water rather than whiskey. The temple housed a spring.
[viii] I was privileged to serve as a consultant on the Massey house design.
[ix] I was privileged to serve as a consultant on the visitors’ entrance design.