The Gibbs surround is a particular form of rusticated doorway or window frame, the pedigree for which extends to ancient times. The term derives from the 18th-century English architect, James Gibbs (1692-1754), a leading figure in the Anglo-Palladian movement.  Gibbs did not invent the form, but popularized its use through his own designs and publications to the extent that it has henceforth been associated with him, especially in Britain where it is referred to by his name.  A standard Gibbs surround consists of a series of square or rectangular blocks either paralleling or interrupting the side architraves of an opening’s frame. Overlapping the top part of the frame are the keystone and flanking voussoirs which can break into the frieze and cornice above. A Gibbs surround is normally topped by a pediment but not necessarily so. Typical is the design that Gibbs included in his highly influential pattern book, A Book of Architecture (1728).[i] In this example, Gibbs situated the blocks against the architrave frame rather than have them overlap it. (Fig. 1)  More often, however, the blocks intersect the frame. 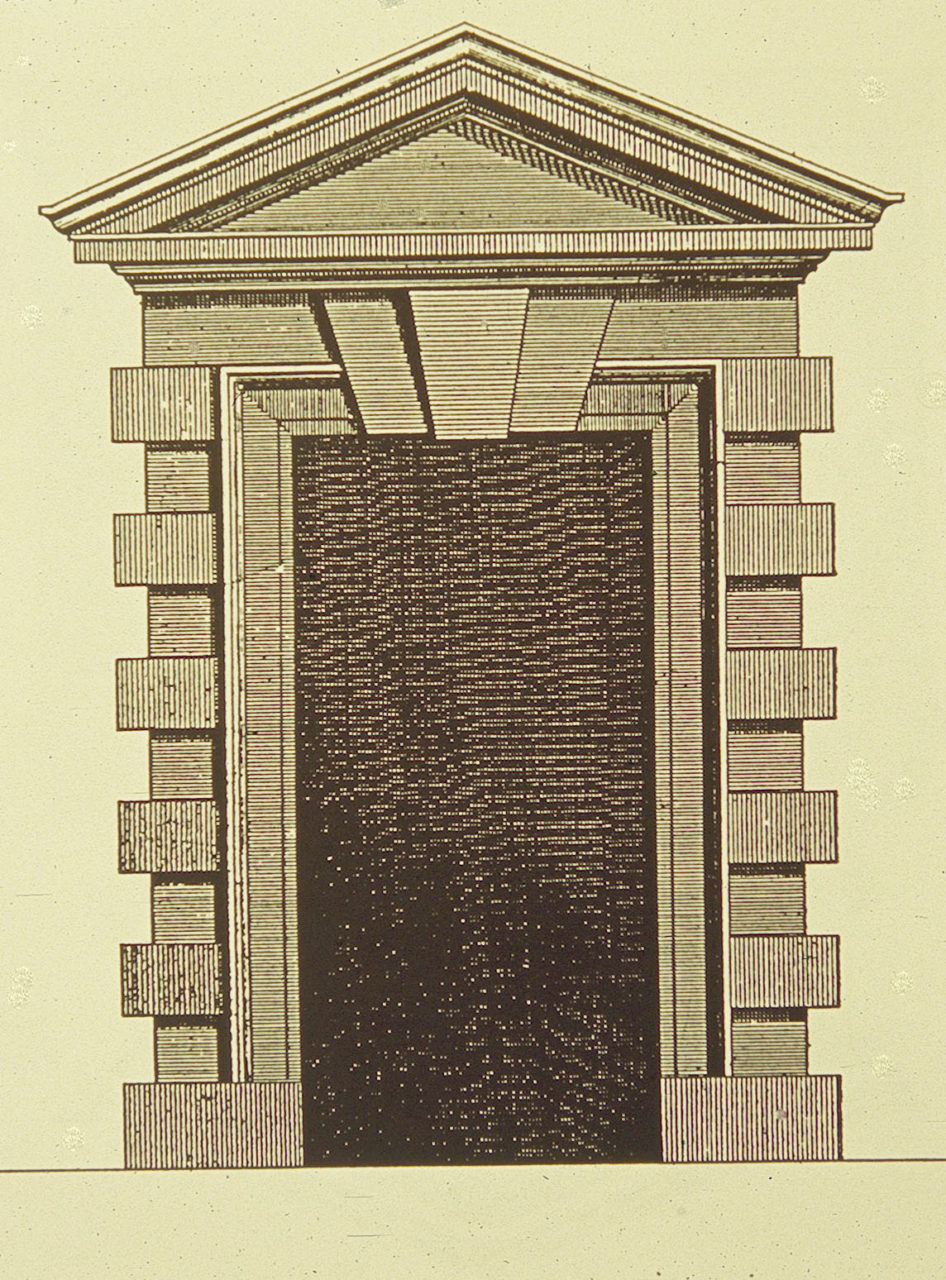 The idea of treating masonry to emphasize the structural muscle of a building originated with the Romans through their use of rustication, which is blocks of stone with deep-channeled joints used to highlight the stones and provide an appearance of strength and solidity. We see this in the detail of Piranesi’s view of the ancient Porta Maggiore in Rome. (Fig. 2) The joints of the arches are deeply cut to accentuate the keystones and voussoirs. Interrupting the shafts of the engaged columns are rough-cut stone blocks to convey ruggedness and suggest that the structure is in the process of being crafted. 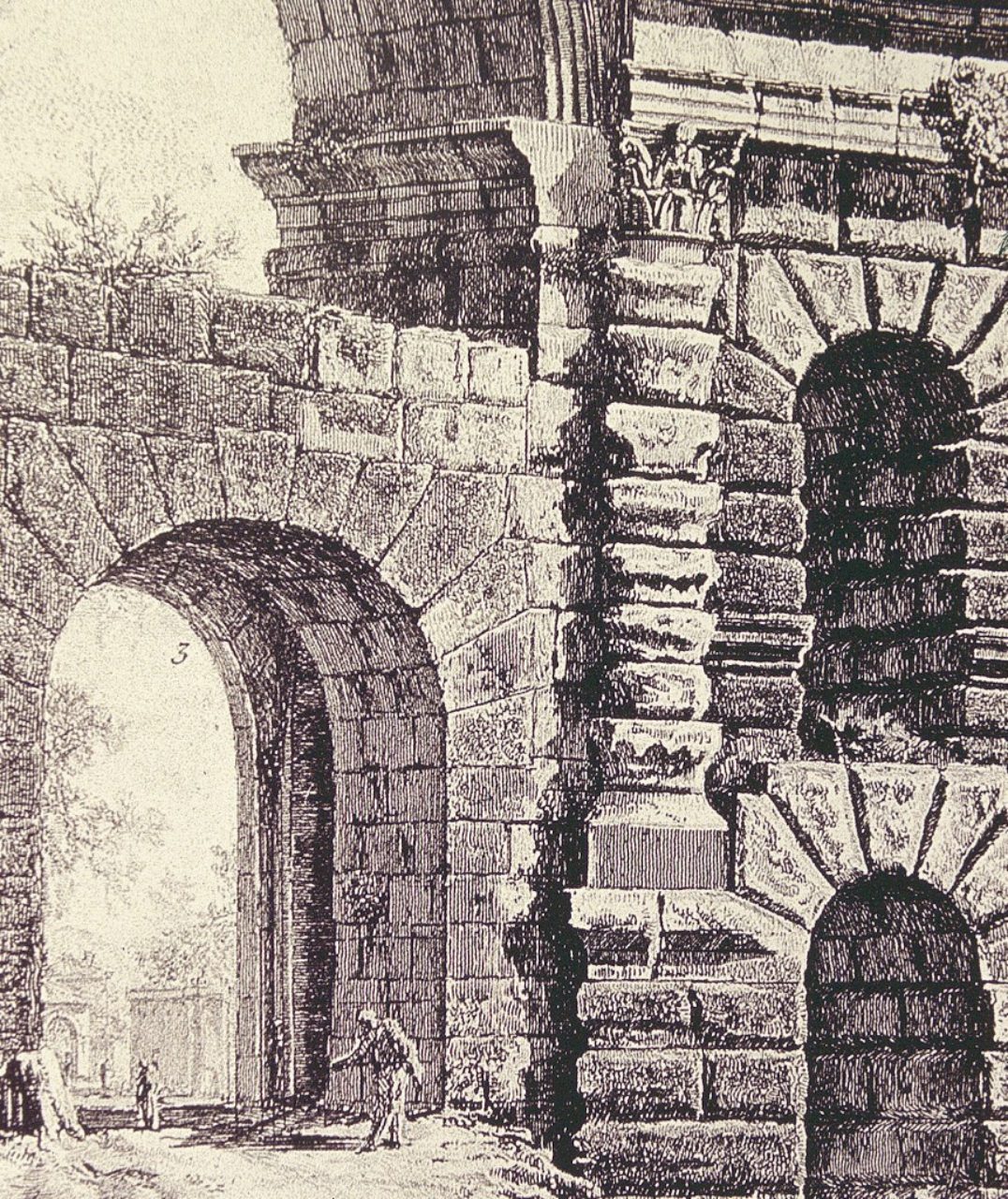 Rustication was resurrected by Renaissance architects such as Sebastiano Serlio, who offered numerous designs employing rustication in his famous treatise Architettura, published in stages beginning in 1537.[ii] Andrea Palladio gave us a bold display of rustication in his design for the Palazzo Thiene, built 1542-1558. This powerfully dramatic work exhibits a full range of rustication types. For our purposes, however, we will focus on the upper-level windows. Here, the half-round columns framing the openings are clasped by heavy blocks of rough-faced masonry. Hunky keystones and voussoirs project from the top of the frame, all combining to form a restless Mannerist composition. (Fig. 3) 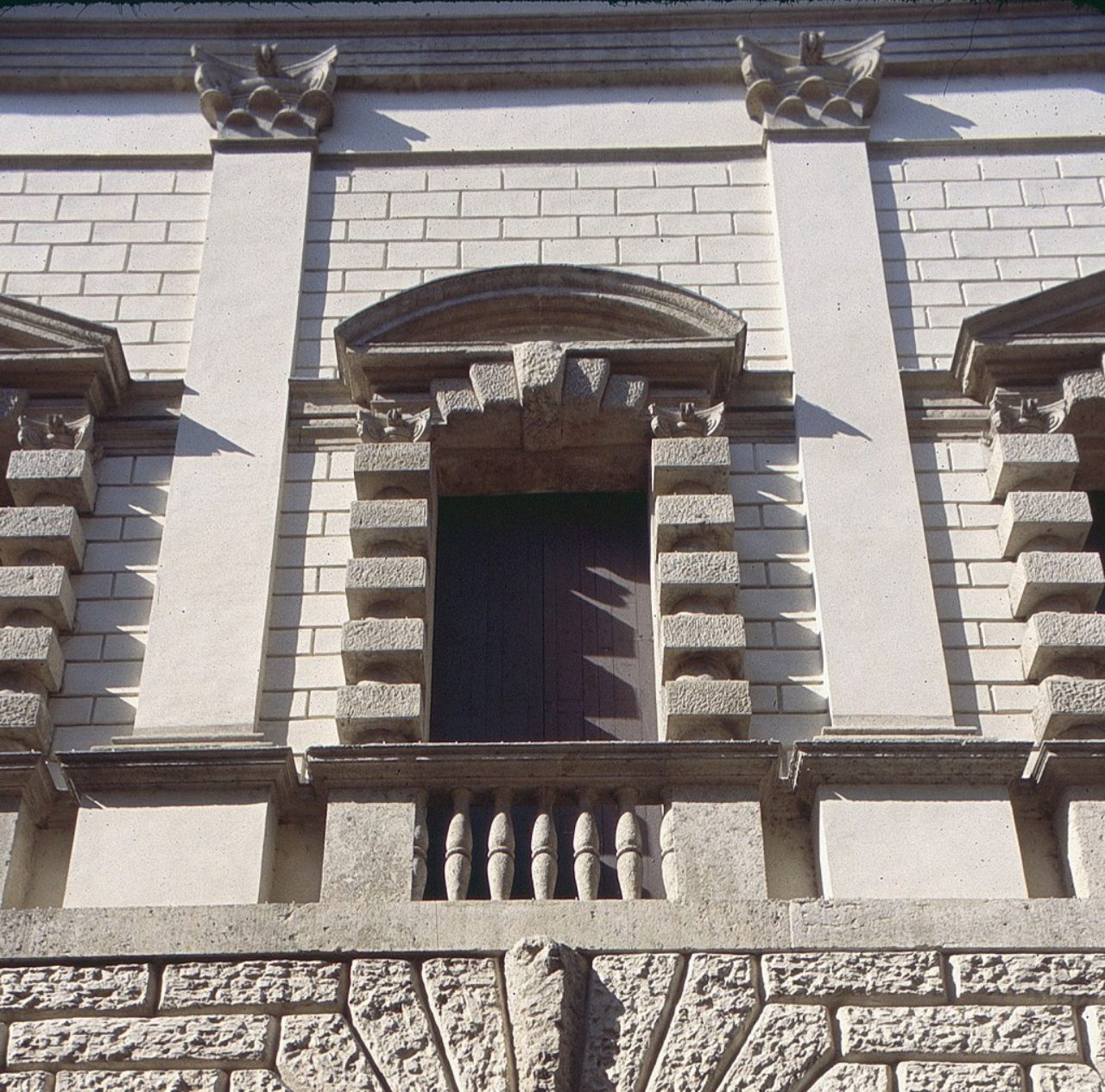 Palladio’s treatment of the Palazzo Thiene windows was illustrated in his famous treatise I Quattro Libri (1570), and gained widespread attention.[iii] Inigo Jones, Palladio’s earliest English disciple, employed similar rusticated openings in several of his designs. However, it was James Gibbs, who exploited the form, and showed it accenting many of the architectural schemes published in A Book of Architecture. Rusticated openings were liberally applied to one of his most famous works, the London church St. Martin-in-the-Fields, the subject of several plates in A Book of Architecture.( Fig. 4) Through these images, St. Martin became the prototype for hundreds of churches in the English-speaking world. The main entrances of St. Martin are classic examples of Gibbs surrounds. (Fig. 5) Here the stone blocks overlap the architrave frame while the keystone and voussoirs project over the pulvinated frieze. 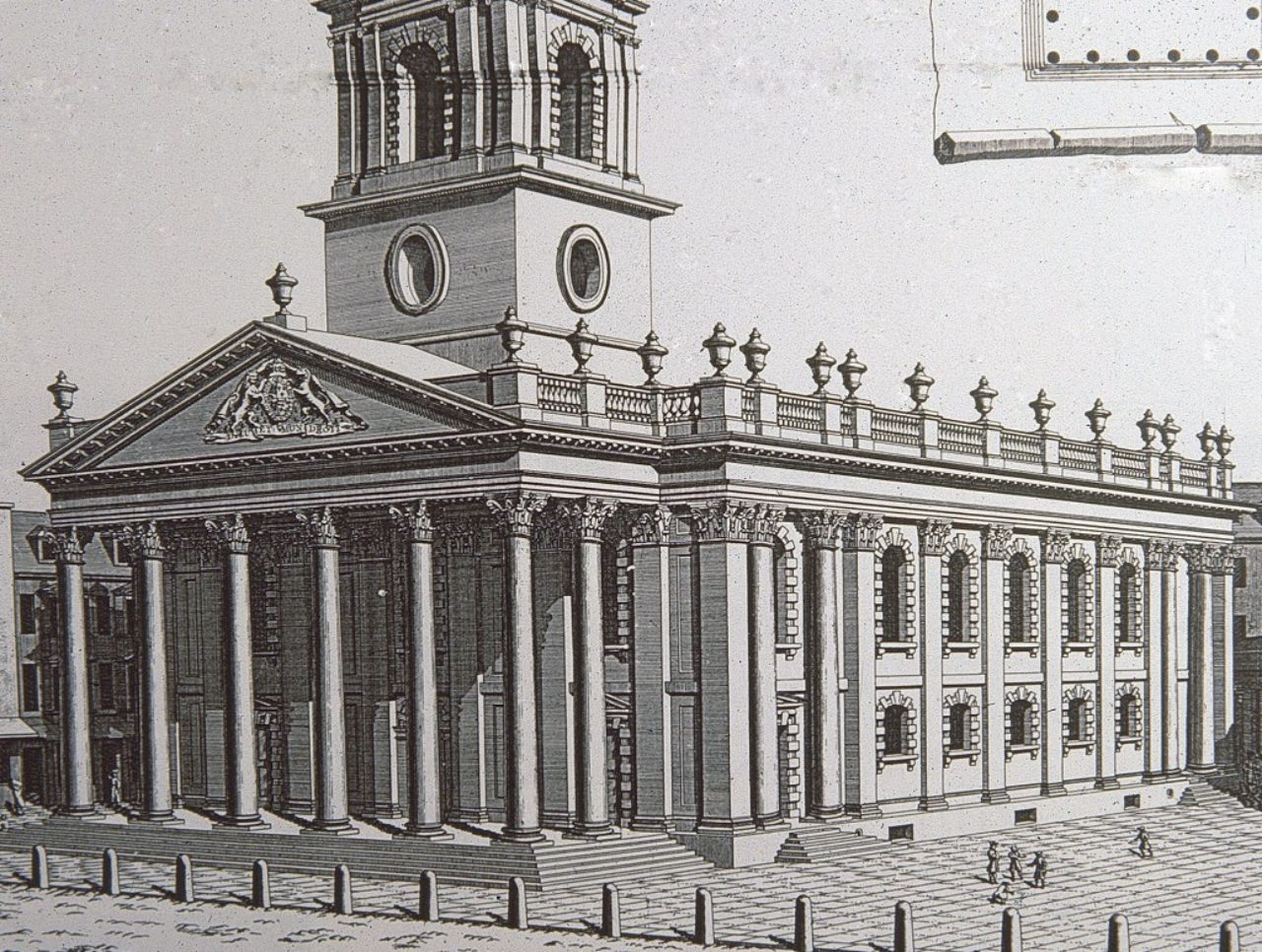 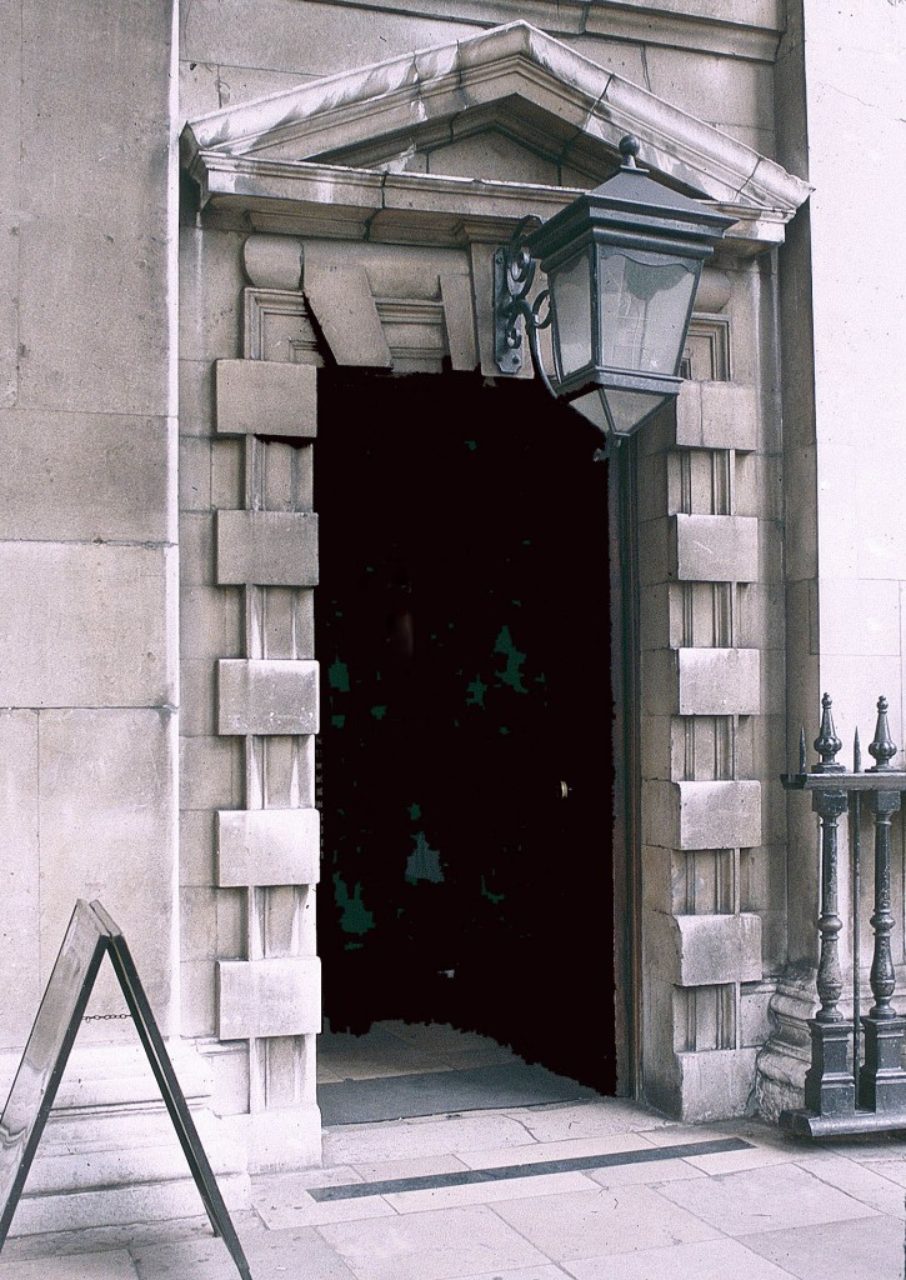 Gibbs’s popularization of rusticated openings led to many imitations both in pattern-book illustrations and in actual buildings. Architects such as William Salmon, William Halfpenny, Batty Langley, William Pain, and others shamelessly plagiarized Gibbs’s designs and published variations on the Gibbs surround in their pattern books. Typical is Plate XVII in William Salmon’s Palladio Londinensis (1734), which shows doorways nearly identical to ones published by Gibbs, but which Salmon ascribes to Palladio. (Fig. 6) Salmon describes the surrounds as “Rustick Window and door." Through these books, the Gibbs surround gained such popularity in the 18th century that it is difficult to know what published sources architects and builders were using. Nevertheless, Gibbs surrounds soon were sprinkled throughout the British Isles as well as in the American colonies. Typical is the doorway on a dignified early Georgian house in Burford, Oxfordshire. A distinctive detail of this doorway is the breaking of the bed moldings over the voussoirs and keystone. (Fig. 7) 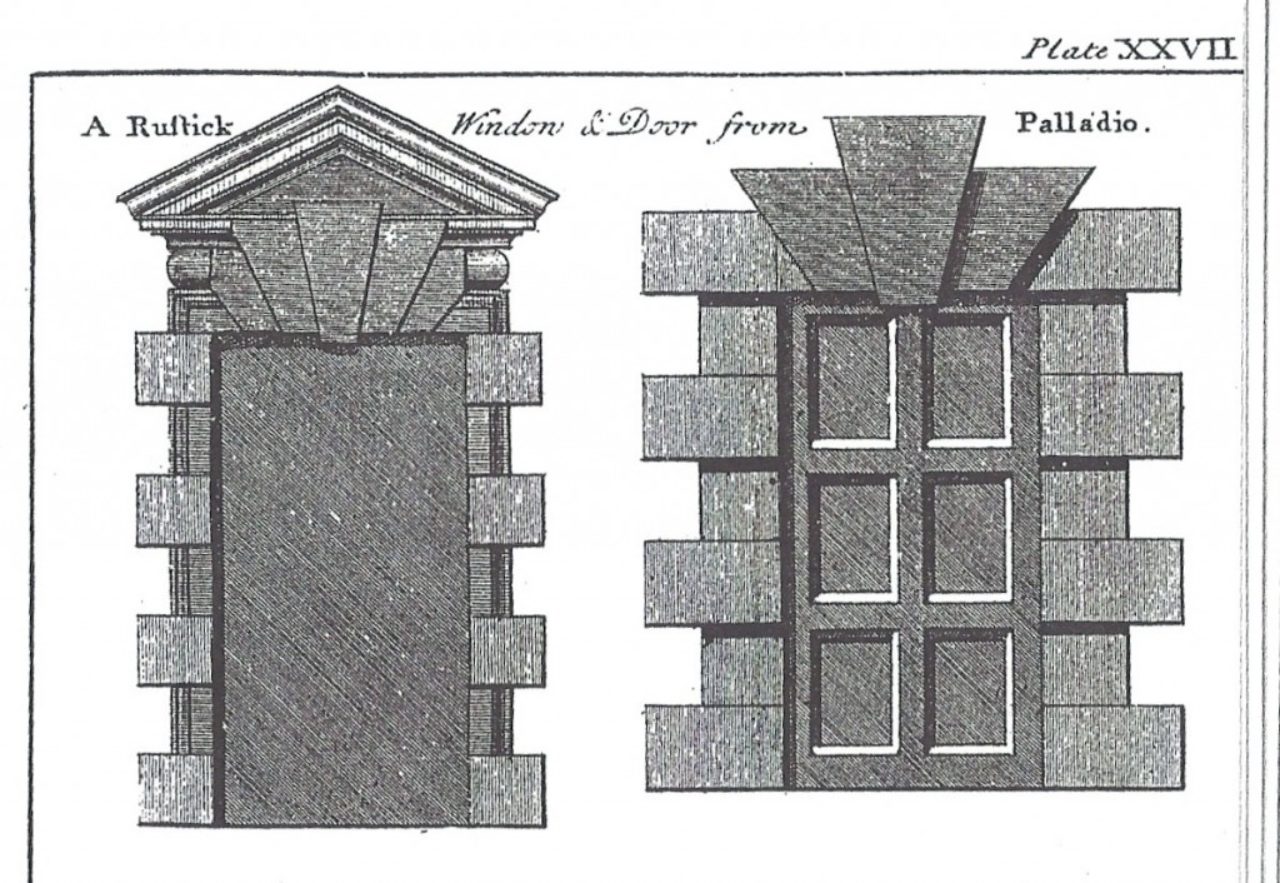 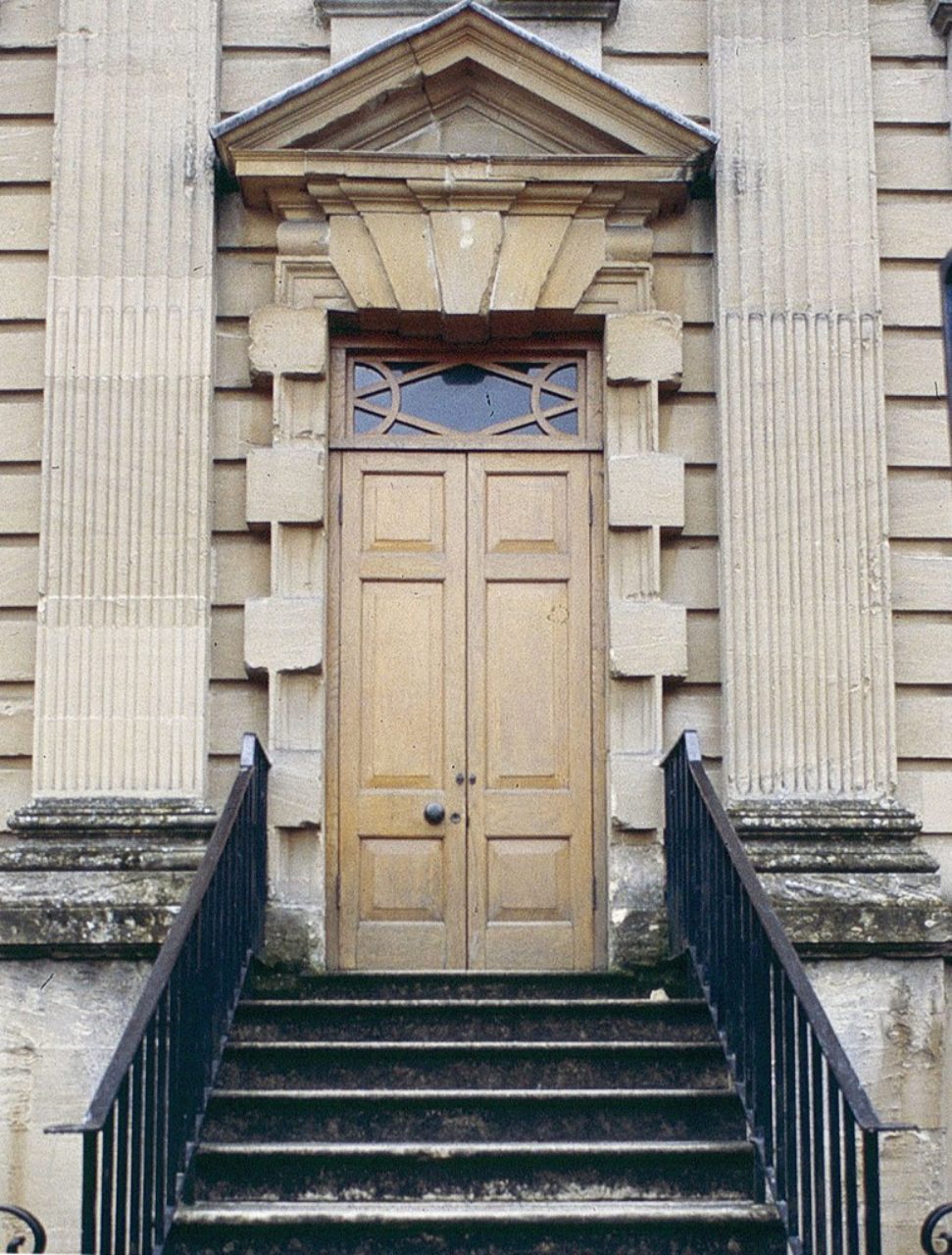 Among the earliest fully developed Gibbs surrounds in America are the three doorways on Aquia Church, built 1757 near Fredericksburg, Virginia. (Fig. 8) For his model, William Copein, the church’s mason, may have been using either Salmon’s illustration or an illustration in William Halfpenny’s Practical Architecture (1736) since both of these works show the Gibbs surround with a pulvinated frieze. Copein gave a lilt to Aquia’s west doorway by scrolling the keystone. (Fig. 9) The stone used for Aquia’s doorways and other trimmings came from a quarry on nearby Aquia Creek, and is the same sandstone used for the construction of the United States Capitol and the White House. In James Hoban’s original elevation drawing for the White House, we see that this building too was embellished with Gibbs surrounds, albeit simplified ones, on its basement windows.[iv] (Fig. 10) 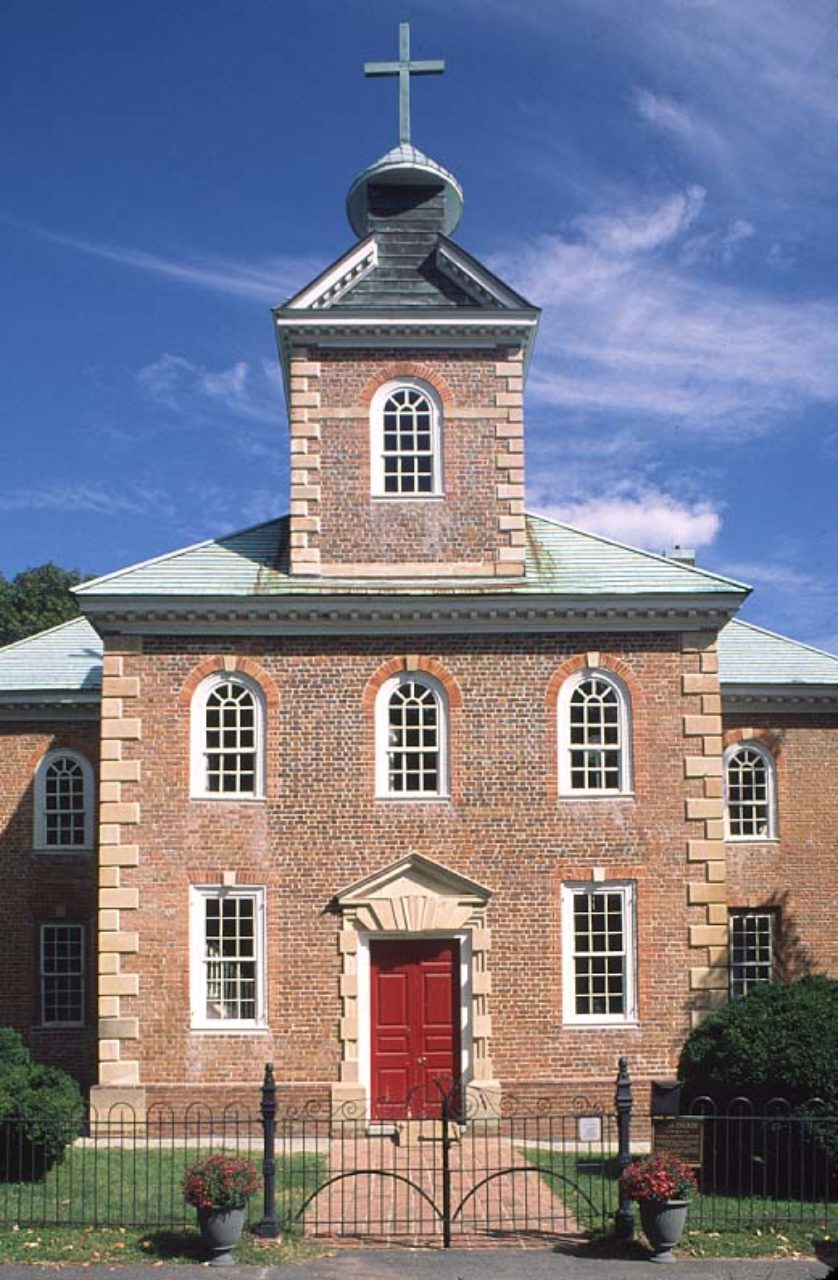 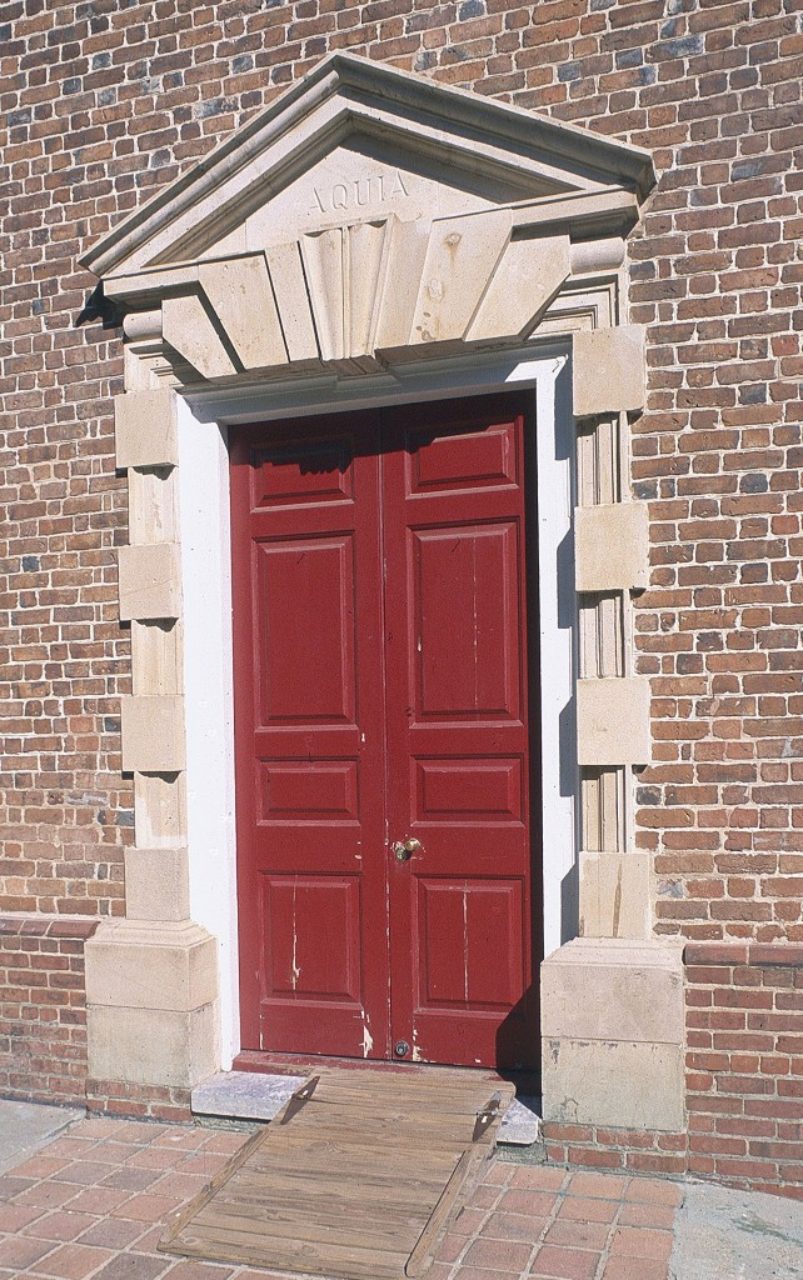 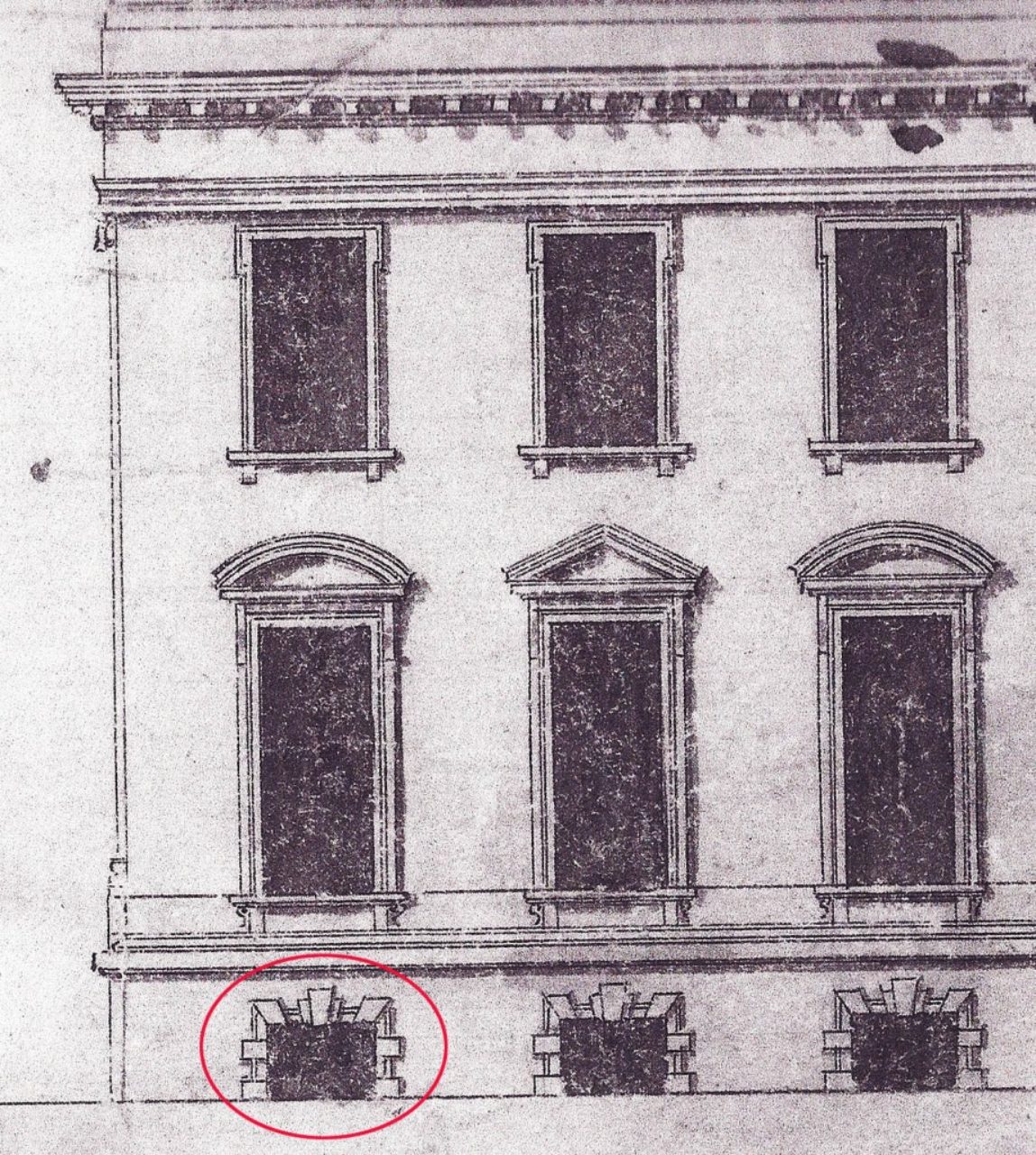 Perhaps the brawniest of America’s colonial-period Gibbs surrounds are the east doorways of St. Paul’s Chapel in New York City. Crafted in reddish-brown sandstone, the surrounds have boldly projecting keystones and voussoirs. The doorways follow the example of St. Martin by having their side blocks overlap the architrave frame. (Fig. 11) With its main shell and interior modeled after St. Martin-in-the-Fields, St. Paul’s was completed in 1766 and survives as the oldest building in Manhattan. The church later impressed the architect Robert Mills, who produced the elevation drawing, shown here with its Gibbs doorways, as a gift to his mentor Thomas Jefferson.[v] (Fig. 12) 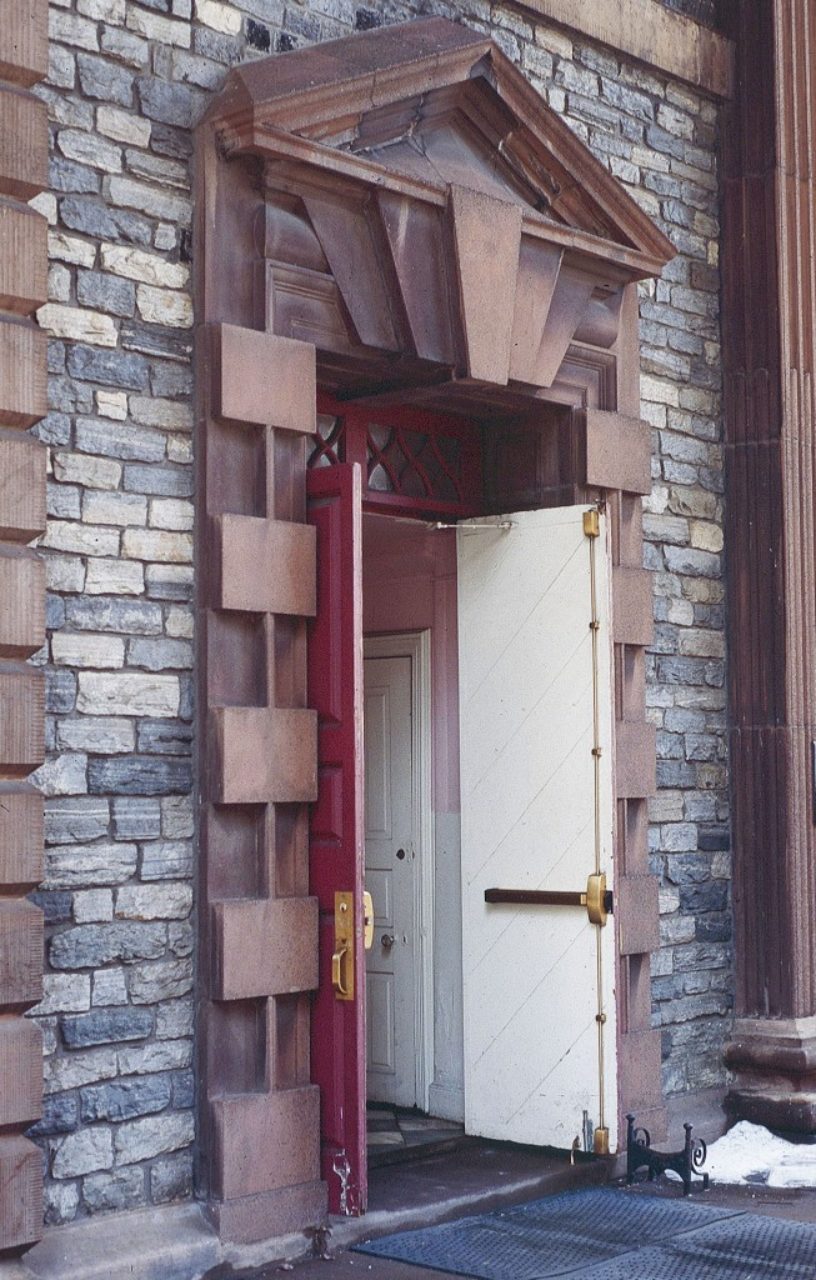 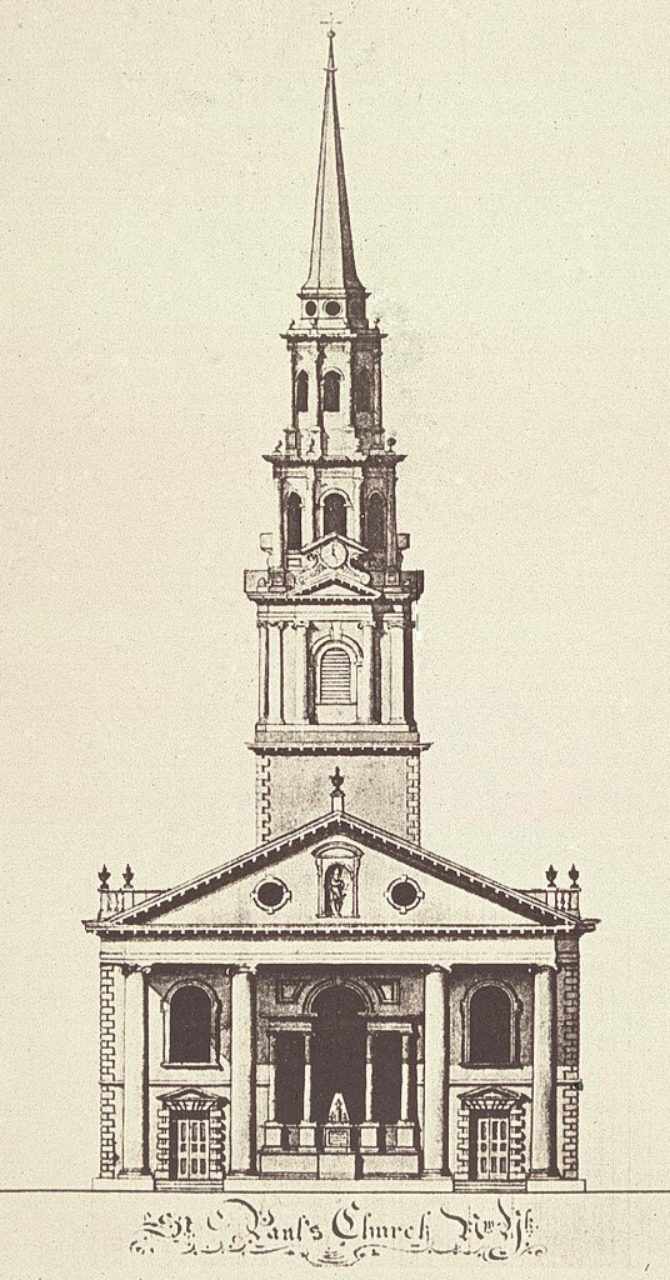 The Gibbs surround passed out of fashion in the early 1800s, but experienced limited revival in late in the 19th century with the American Renaissance movement. Architect Stanford White of the famous firm of McKim, Mead and White, liberally exploited the form on the openings of the 1900 Stuyvesant Fish house on 78th Street in New York.[vi] White extended the blocks onto the face of the building and added consoles to support the pediments. (Fig. 13) In recognition of Virginia’s Georgian architectural heritage, the Norfolk firm of Peebles and Ferguson graced the entrance of their 1936 Georgian Revival Virginia Museum of Fine Arts with a strongly articulated Gibbs surround, complete with broken pediment and Roman pinecone. (Fig. 14) 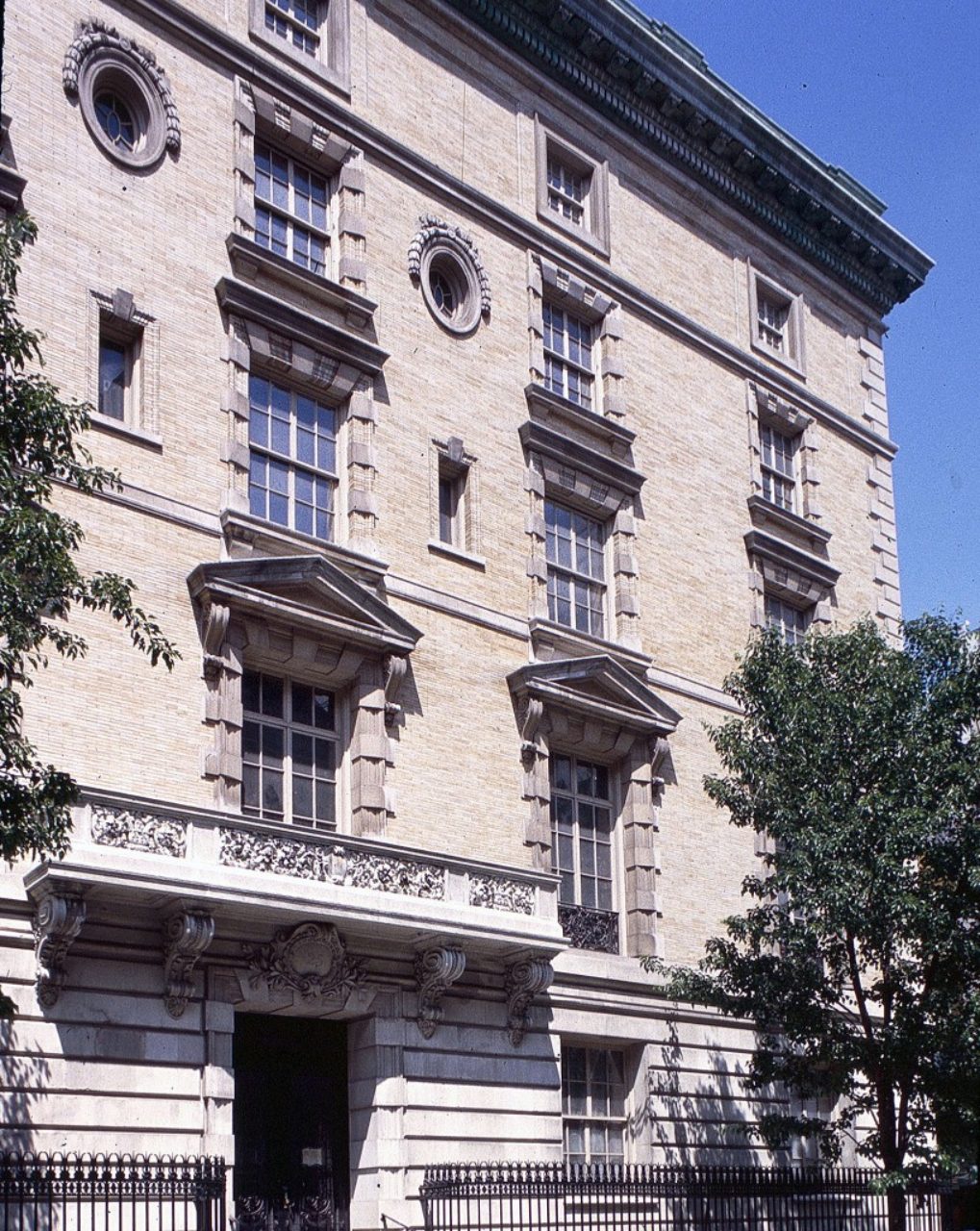 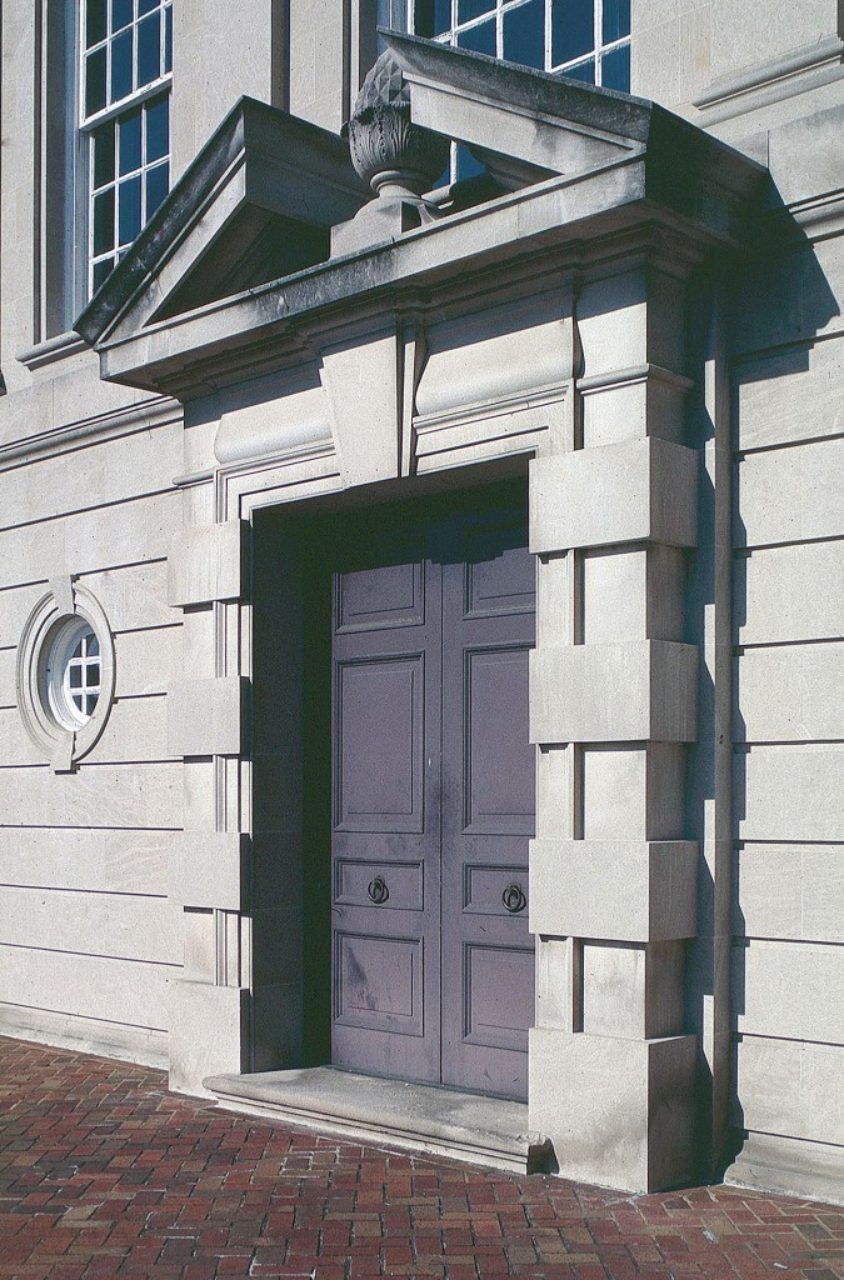 The Gibbs surround is an effective architectural device with a distinguished ancestry. It has great visual strength and signals importance to openings. It can be executed in stone, cast stone, brick, stucco, or wood. I have even seen it made with Perma-Stone but I don’t recommend the use of that material.

[i] Gibbs’s Book of Architecture is now available as a Dover Publications reprint. [ii] The 1611 English translation of Serlio’s treatise is available as a Dover Publications reprint under the title: The Five Books of Architecture. [iii] Some scholars hold that credit for the initial design of the Palazzo Thiene should be given to Giulio Romano, and that Palladio carried out Romano’s scheme. [iv] Limited access to the White House grounds prevented me from photographing the basement windows. Their Gibbs surrounds are intact, however. [v]Mills’ ca. 1803 drawing now hangs in the dining room at Monticello. St. Paul’s steeple was added in 1796. [vi] The Stuyvesant Fish house is currently the headquarters of the Bloomberg Family Foundation, established by New York Mayor Michael Bloomberg.