The Parthenon and its Derivatives 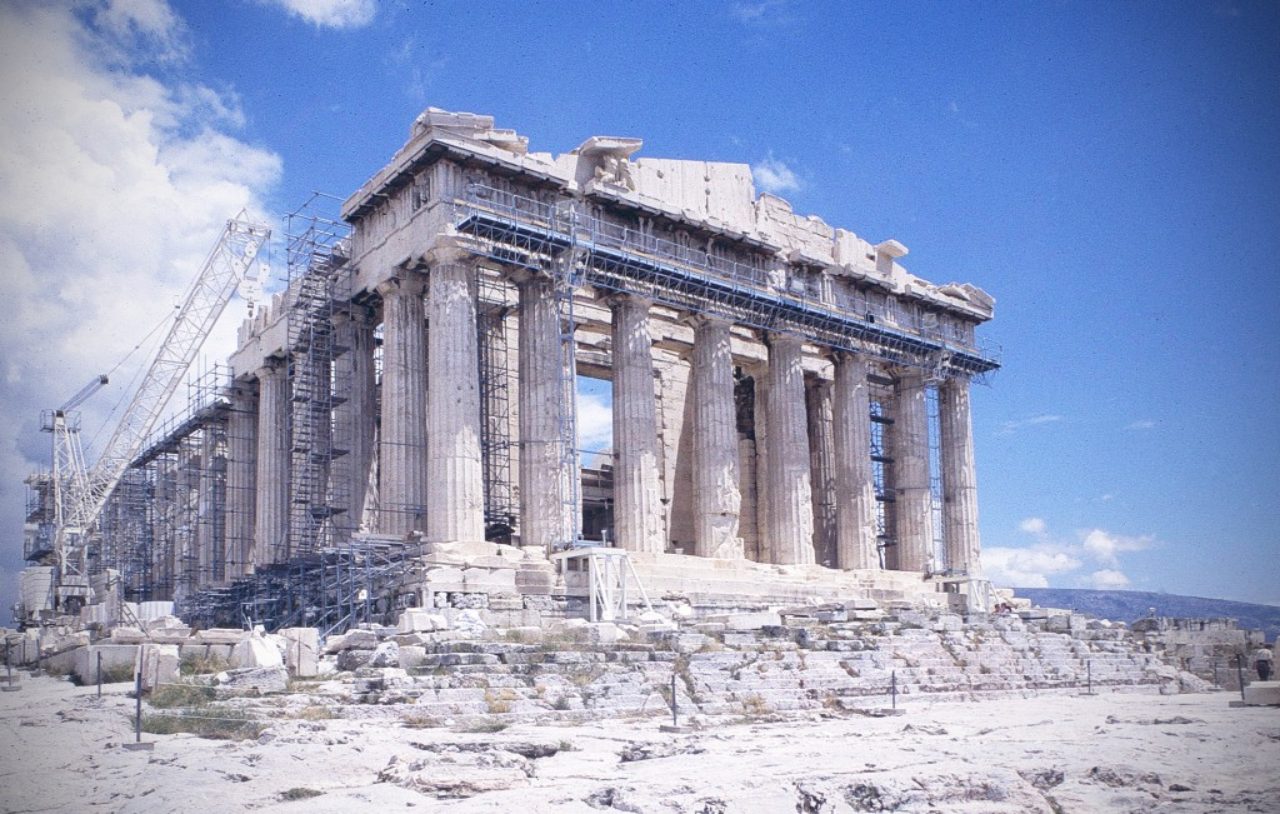 The Parthenon is universally regarded as one of the greatest works of architecture ever created. Designed by the architects Iktinos and Callicrates, the temple was completed in 438 B.C. By the 5th century A.D. it was being used for Christian worship. The Turks converted it to a mosque following their victory over the Byzantine Empire in 1453. Despite these adaptations, the Parthenon’s exterior survived essentially intact, and continued as a functioning roofed structure for another two centuries. In 1687, during the Venetian siege of Athens, the Turkish military commandeered the Parthenon for ammunition storage. When the Venetians bombarded the Acropolis, a shell hit the Parthenon, exploded the ammunition, and left the building a roofless ruin. (Figure 2) The Turks later constructed a small mosque within the ruin. 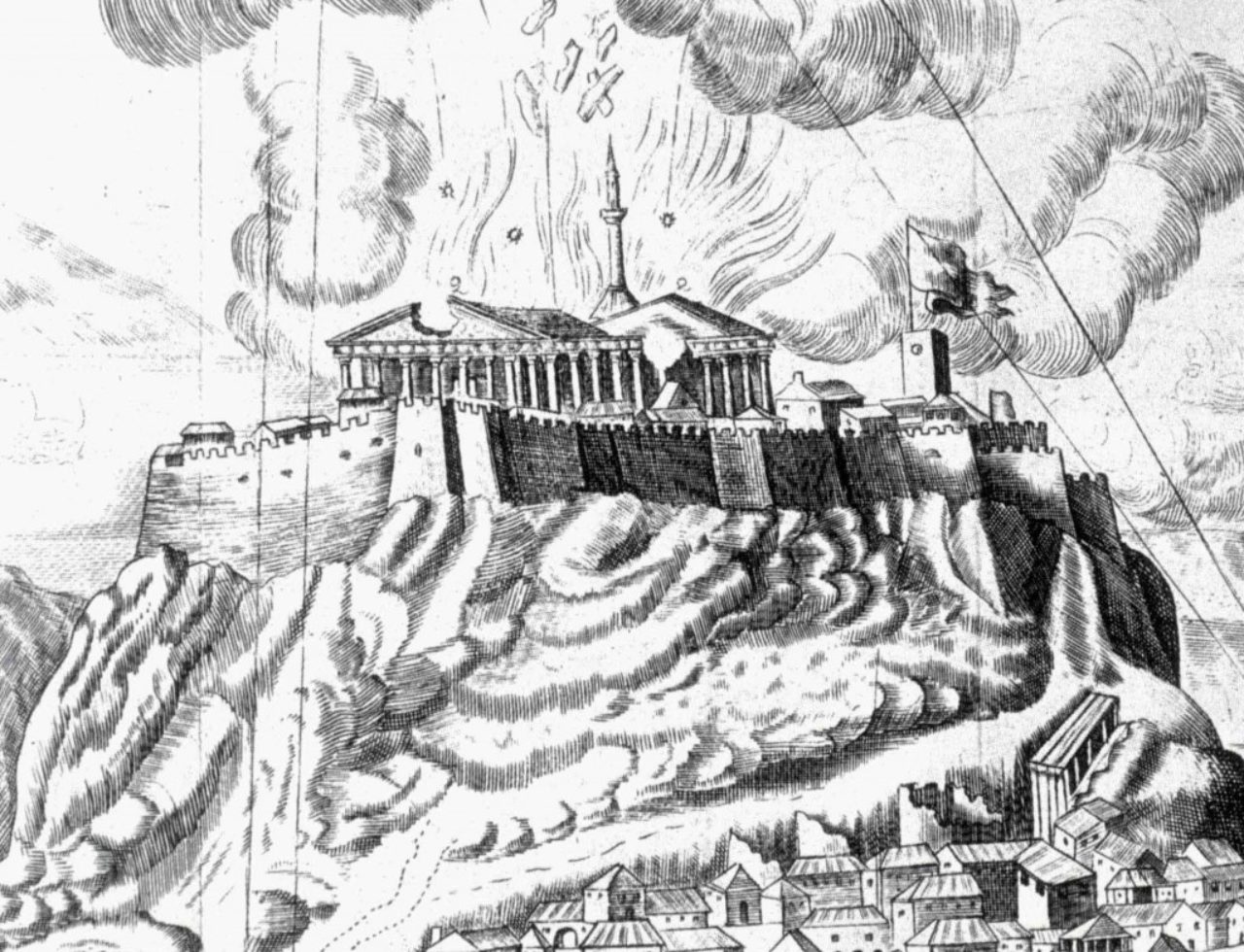 In their 1750s expedition to Greece, British architects James Stuart and Nicholas Revett recorded the Parthenon’s ruined condition with its mosque. (Figure 3) They published this image along with plans, elevations, and details of the Parthenon in 1789, in the second volume of their monumental work, The Antiquities of Athens. The illustrations included an elevation showing the temple’s west facade in a restored state. (Figure 4) Revealing the Parthenon’s original sublime beauty, Stuart and Revett’s elevation inspired numerous adaptations over next century and a half. Offered here is a brief survey of selected architectural works displaying the influence of the Parthenon on their design. 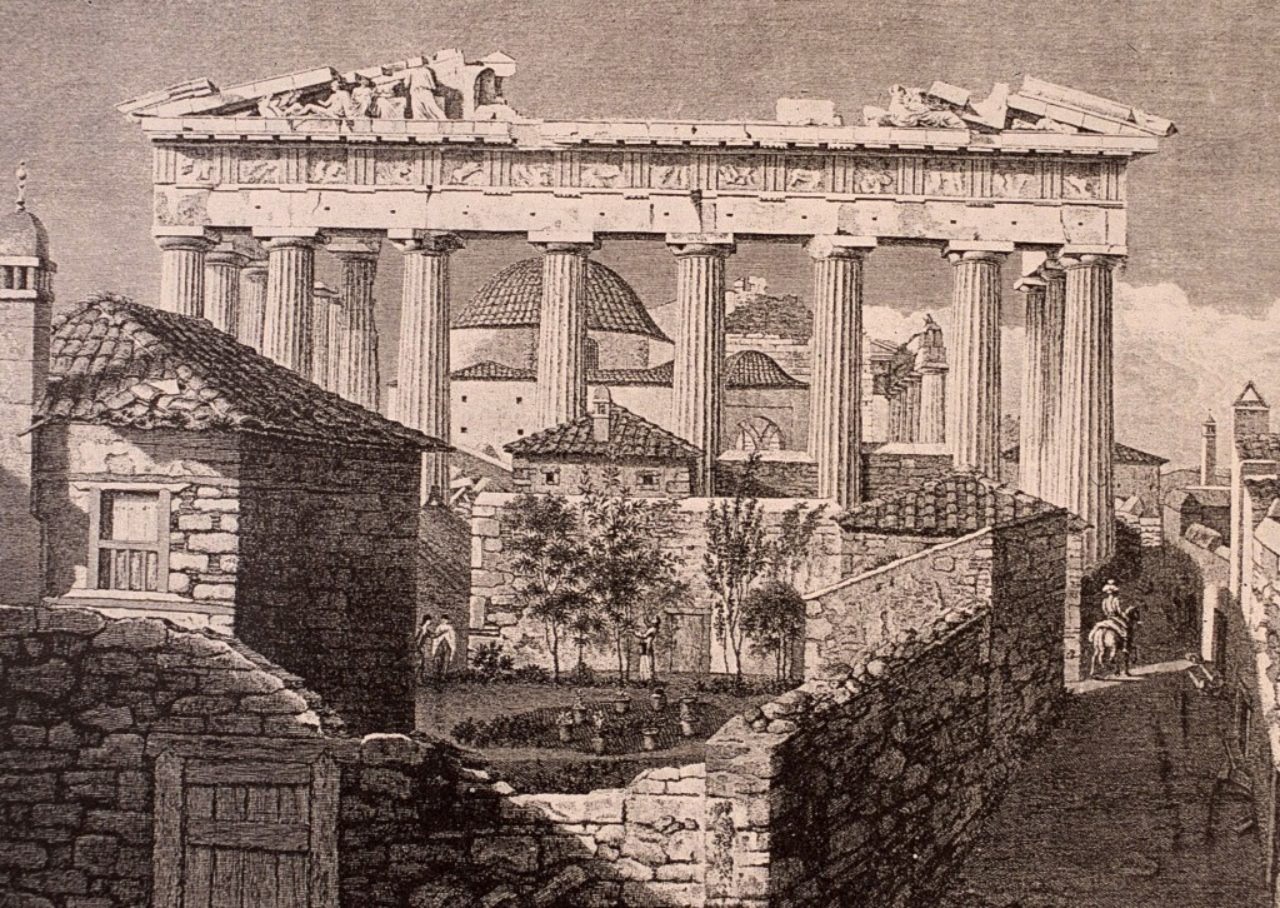 Figure 3. The Parthenon, ‘The Antiquities of Athens’, Vol. II, Chap. I, plate I. 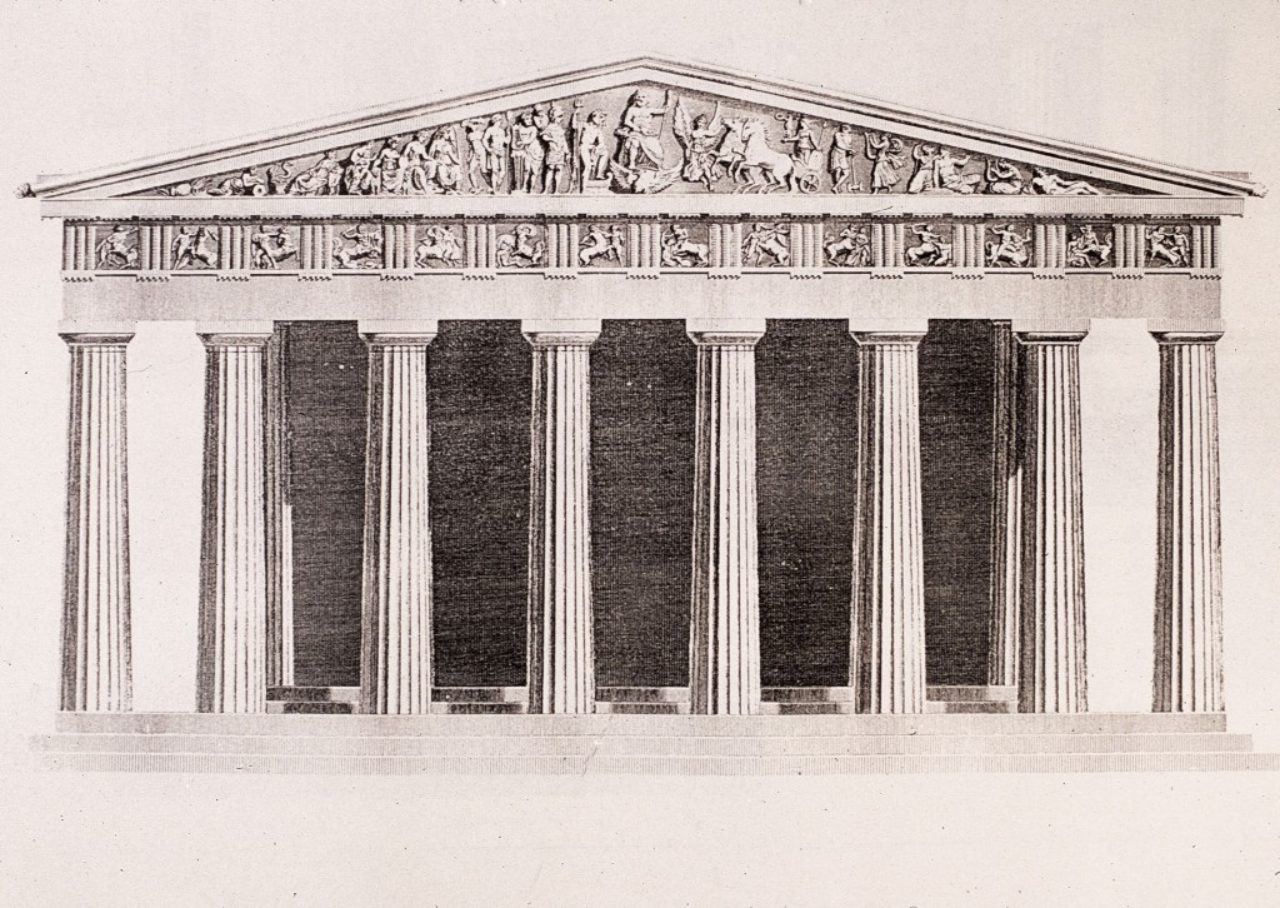 America’s earliest quotation of the Parthenon is Philadelphia’s Second Bank of the United States, completed in 1824. (Figure 5) The 1818 competition for its design was won by William Strickland, a former apprentice of Benjamin Henry Latrobe who also entered the competition. Strickland addressed the bank directors’ call for “a chaste imitation of Grecian Architecture”[i] by submitting a scheme employing identical Parthenon-type Doric porticos on the north and south elevations. Strickland declared: “the student of architecture need go no farther than the Antiquities of Athens as a basis for design.”[ii] Keeping with the charge to be “chaste,” Strickland’s design avoided any sculptural decorations. Although impressive, the marble building shows that Strickland had not quite mastered the style. The columns are somewhat thin and widely spaced, and his metopes are not exactly square as proper metopes should be. Strickland’s architectural skills are more evident in the building’s handsome vaulted banking room. The bank is now a museum administered by the National Park Service. 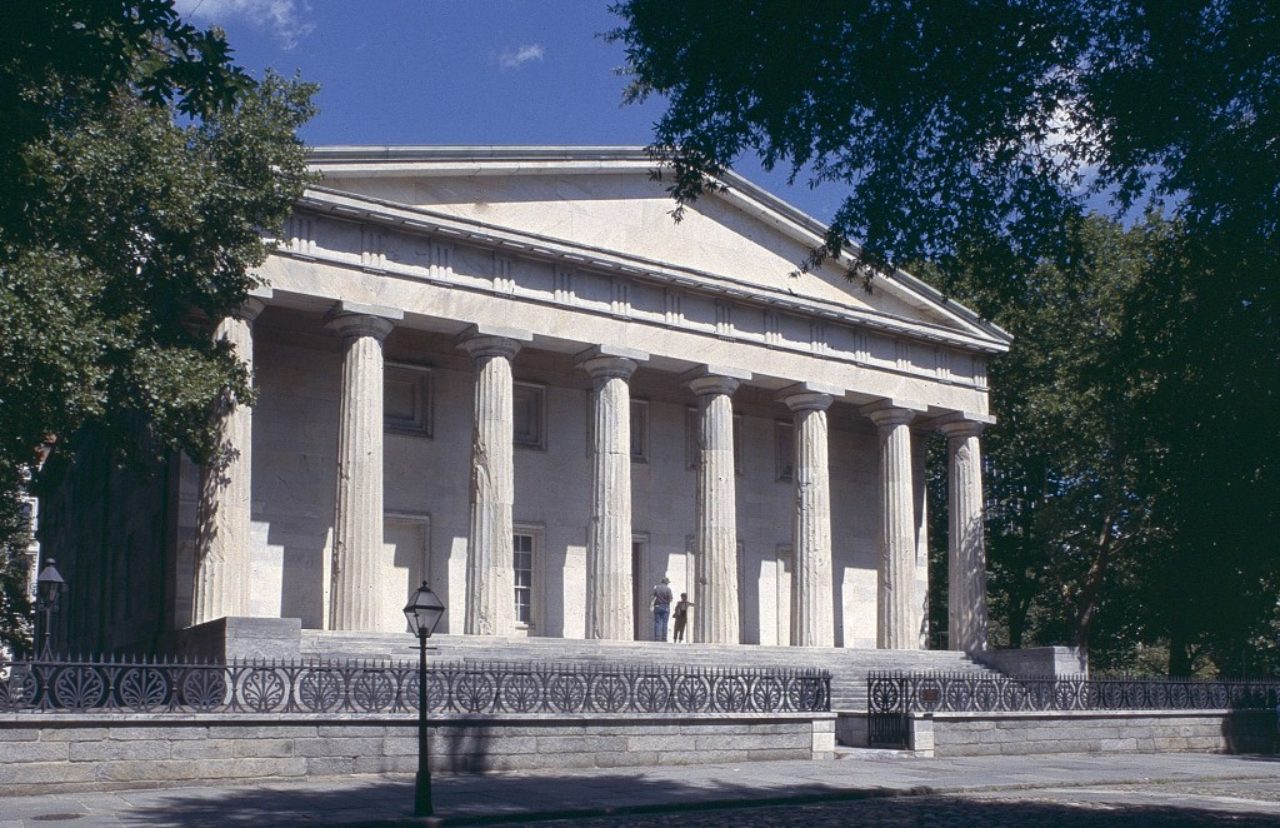 Opened in 1835, the third Indiana Statehouse, designed by the firm of Town and Davis, was Antebellum America’s closest replication of the Parthenon. (Figure 6) Although not peripteral, the temple-form structure followed the Parthenon’s proportions by having a full sixteen bays on its side elevations, but Town and Davis defined the bays between the front and rear porticos with piers rather than freestanding columns.  A more conspicuous departure from strict Greek precedent was the introduction of a tall dome over the center. The limestone constructed statehouse gave the appearance of solidity and permanence, but by the 1860s it had become shabby and its foundations began to fail. The building was finally condemned and demolished in 1877, having served Indiana for only forty-two years, a surprisingly poor record when compared to its ancient Greek precedents. 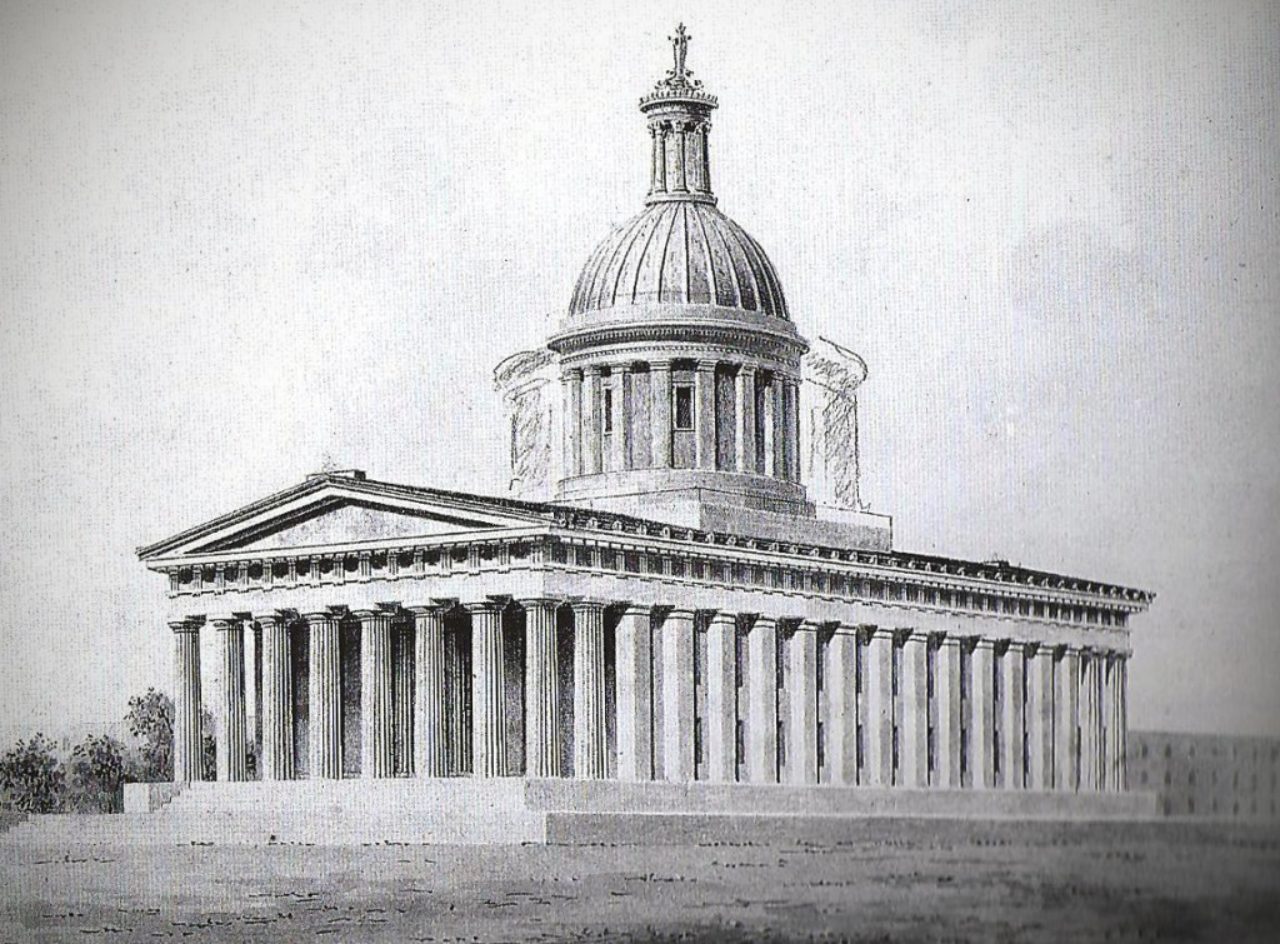 Town and Davis’s more famous and still extant work in the Parthenon idiom is Federal Hall National Memorial on Manhattan’s Wall Street. (Figure 7) Built 1833-42 using marble quarried in Westchester County, the structure replaced the original Federal Hall where George Washington took the oath of office as the first President. The building originally served as the U.S. Customs House but it is now is a museum honoring the first inauguration. Although devoid of sculptural decoration, the massive Doric portico closely follows the Parthenon’s. However, it veers from its model by its placement on a high podium rather than a stereobate. Like the Indiana Statehouse, its side elevations have piers rather than colonnades. Its roof is also straddled by a central dome, but a barely visible saucer dome instead of a dome with a drum as used at Indianapolis. 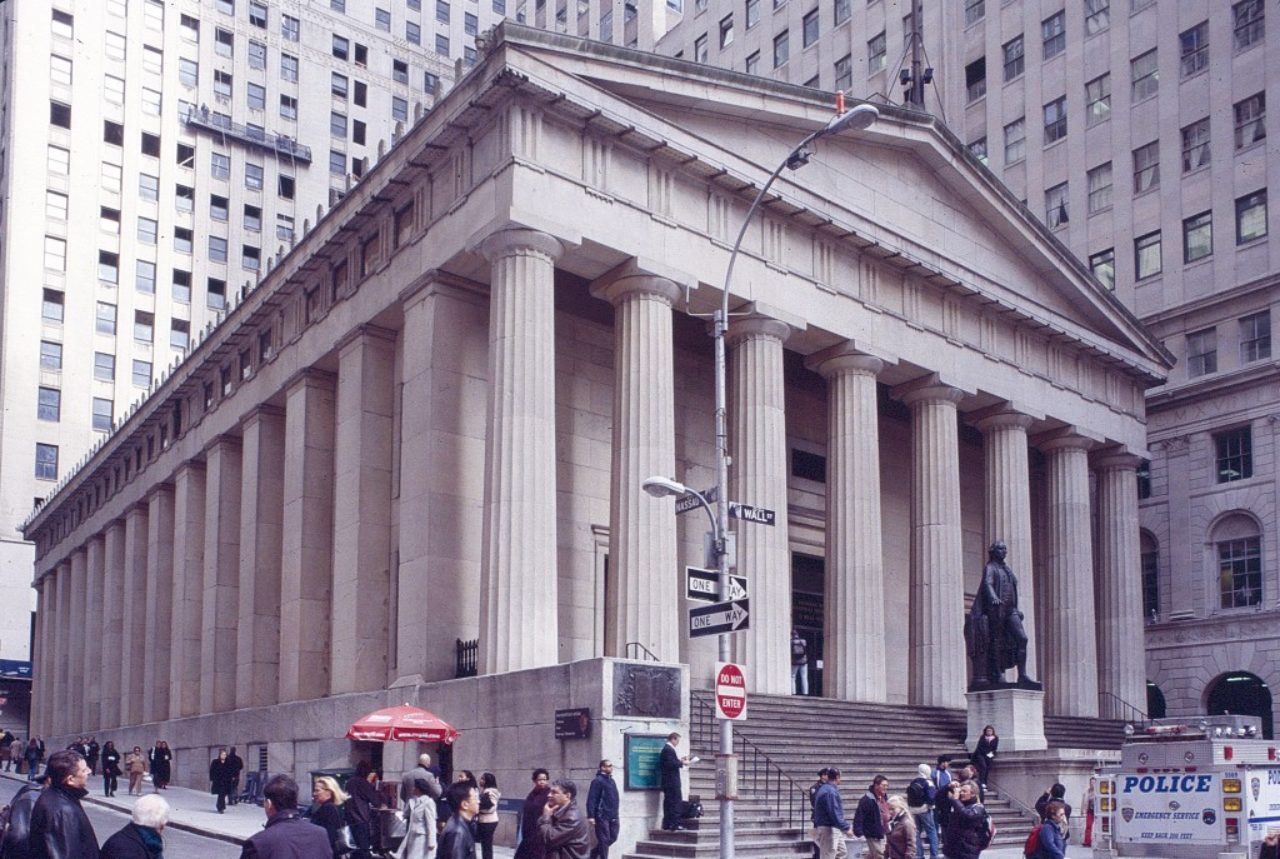 The nation’s capital city received echoes of the Parthenon in the north and south octastyle Doric porticos of the sprawling structure begun in 1836 as the United States Patent Office. (Figure 8) The original design was prepared by Ithiel Town and William P. Elliott, Jr., but it was soon modified by Robert Mills. The central section of the south elevation was the first part to be constructed. It was executed in Aquia Creek sandstone while the rest of the building was faced in marble.  The portico’s canonical correctness demonstrates Mills’s mastery of the Periclean Greek vocabulary. Because of the street lowering and later removal of the front steps, the south portico now stands on a high granite basement. However, the portico’s axial placement on 8th Street maintains it as a dominant element in the district’s cityscape. The building now serves handsomely as the National Portrait Gallery and National Museum of America Art. 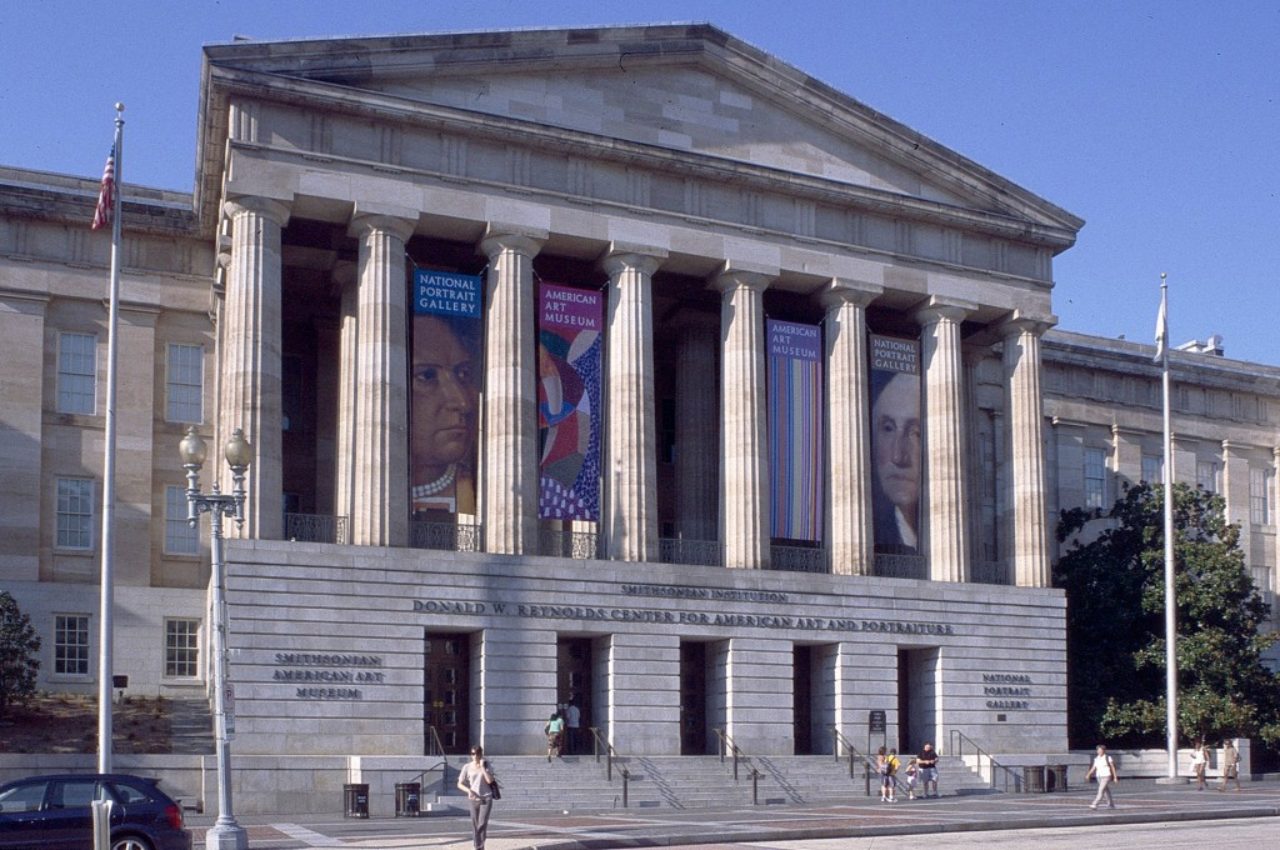 Berry Hill in southern Virginia is America’s premier example of Parthenon-inspired residential architecture. (Figure 9) Completed in 1844 for James Coles Bruce, one of Virginia’s most affluent planters, the National Historic Landmark mansion was designed by John E. Johnson, a West Point graduate and friend of the family. Employing the intimidating image of a temple for gods, Berry Hill signals the extremes to which the Greek Revival style was taken for domestic use. Indeed, Bruce, who owned hundreds of acres tended by scores of slaves, had the status of a local deity. Berry Hill recalls the Parthenon primarily in its imposing Doric portico. The rear elevation is irregular with exposed brickwork. Berry Hill stood unoccupied for some fifty years but is now restored and serves as a country hotel. 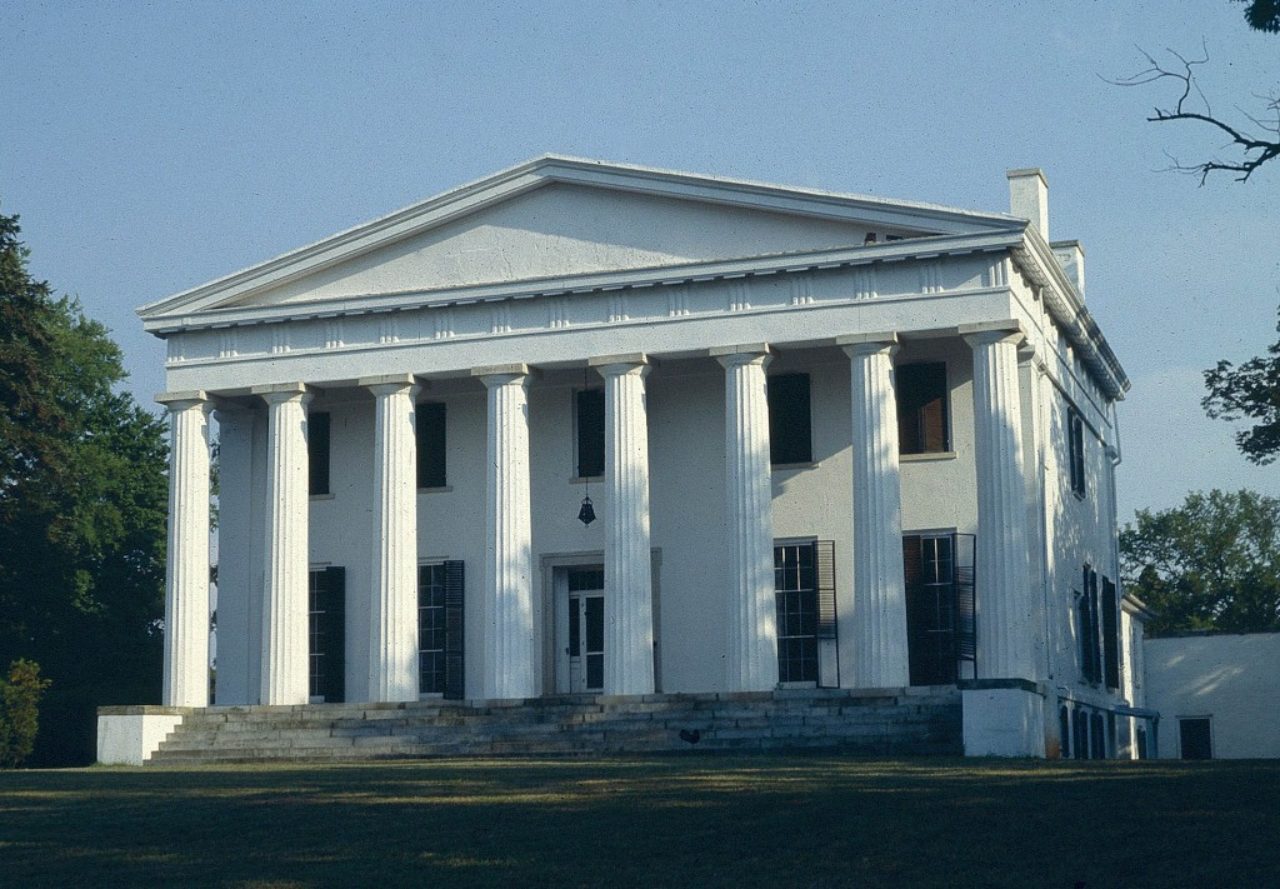 During the 19th and early 20th centuries, many museums and schools made an effort to encourage knowledge and appreciation of architecture and sculpture by assembling plaster casts of important architectural elements and statuary. One of country’s largest and finest collections of casts exists in the Hall of Architecture in Pittsburgh’s Carnegie Museum of Art. Created in 1907, the collection remains unchanged, and is a unique survival in America since other museums have discarded their casts. Most of the museum’s architectural pieces are full scale. An exception is the plaster cast of the Parthenon. (Figure 10) In order to show the building in its entirety, the model is miniature, barely more than two feet high. Though tiny, the temple’s various features are accurately depicted and allow one to grasp the full character of the Parthenon as it appeared in its original condition. 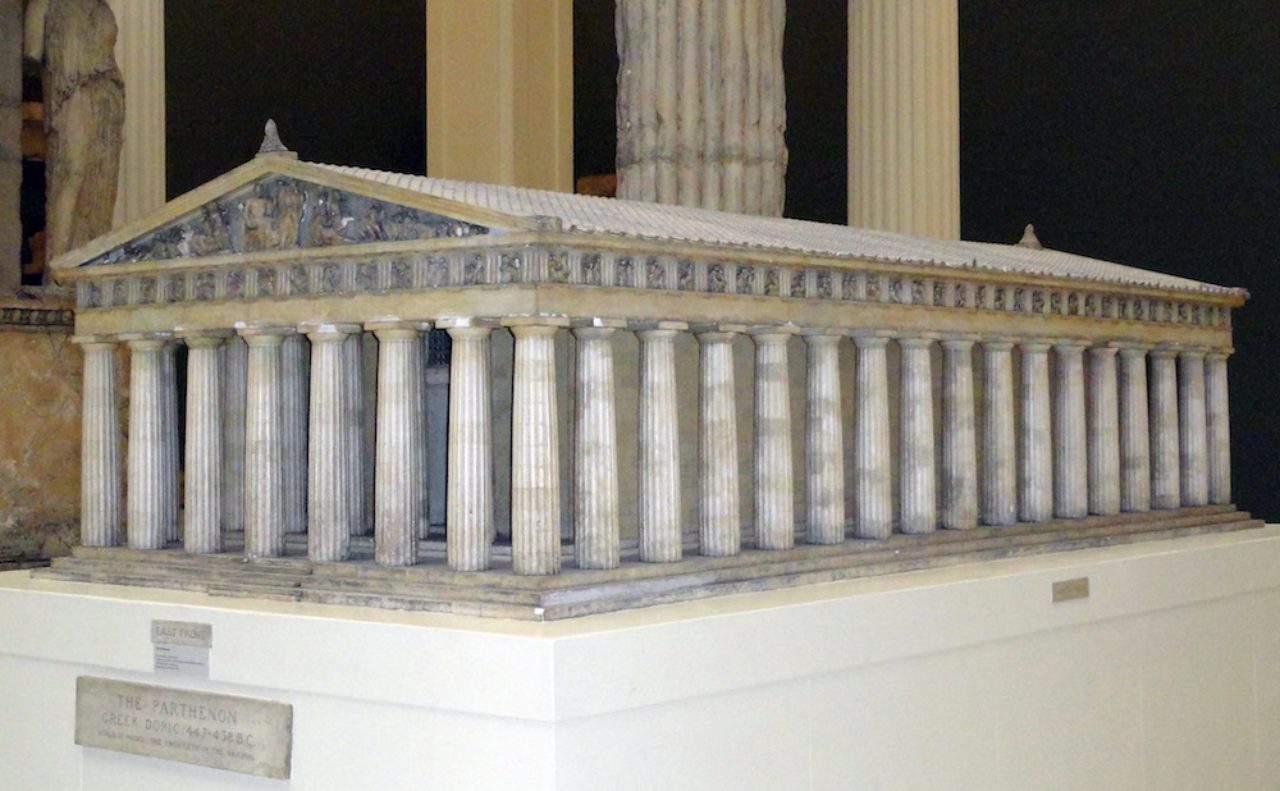 The burning of Moscow during Napoleon’s occupation in 1812 generated an extensive rebuilding of the city, much of which employed the newly fashionable Grecian style. One of the victims of the fire was the main building of Matvei Kazakov’s Moscow University (begun 1784), adjacent to Red Square. In the 1817-19 reconstruction, the Italian-trained Domenico Gilardi replaced Kazakov’s Ionic facade with a heroic Doric portico set on an elevated base. (Figure 11) The octastyle portico draws inspiration from the Parthenon but adds ornaments not found on the original, such as the egg-and-dart molding in the echinus of the capitals. Like most of Moscow’s porticos, Gilardi’s portico does not project, but is set close against the front wall with a frieze of sculpted classical figures immediately behind the columns. Typical of Russian buildings of the period, the stuccoed wall surfaces are painted a pastel color to set off the gleaming white architectural details. 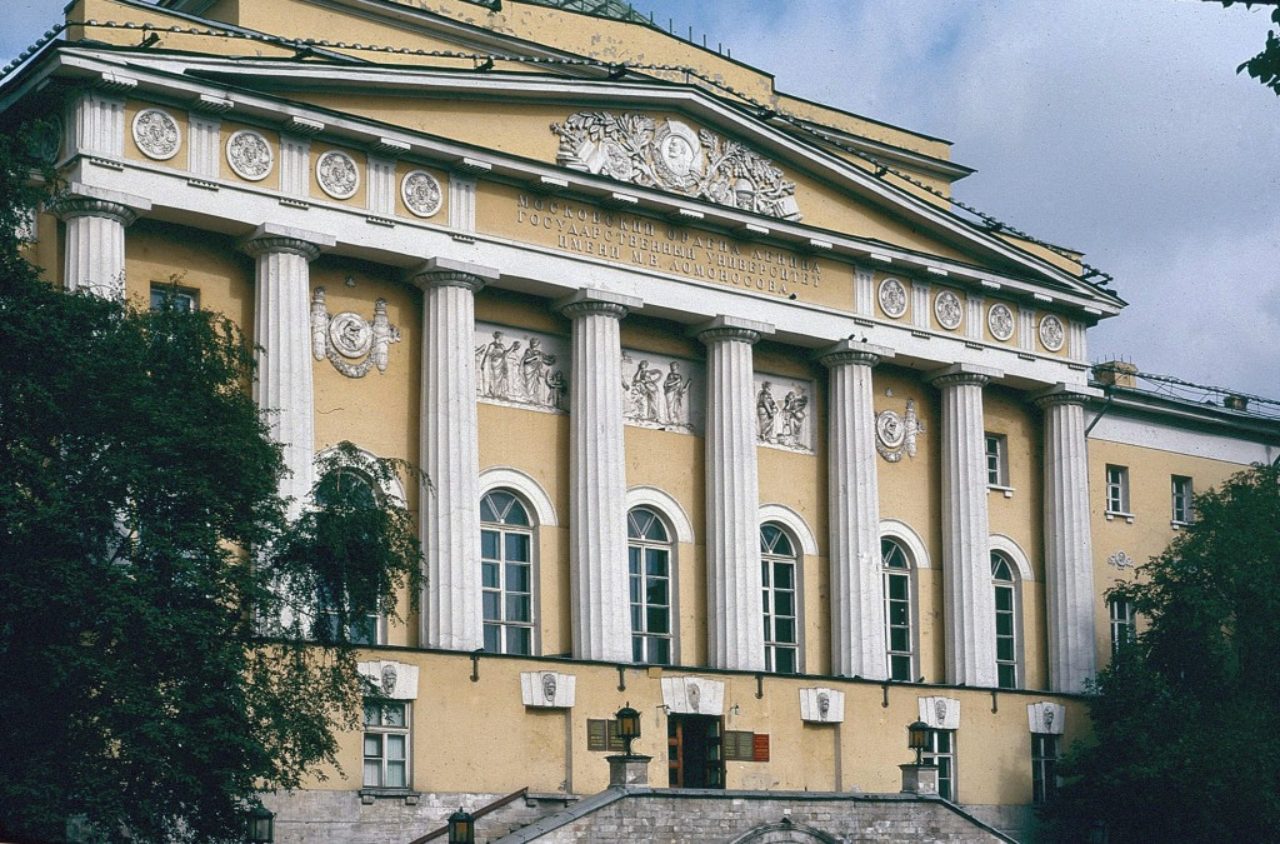 Several blocks north of Gilardi’s Moscow University is another Neoclassical monument employing a Parthenon-type portico. Completed in 1803, the building originally was the private residence of L.K. Razumovskii. Architect Afanasii Grigorev modified the facade in the 1820s by adding the Doric portico. (Figure 12)  Like most of Moscow’s 19th-century porticos, Grigorev’s portico is primarily decorative, and does not shelter a main entrance. It echoes the Moscow University portico with its placement above an arcaded ground floor. The English Club, a social club for Moscow nobility, occupied the building from 1831 until 1917. It now serves as Moscow’s Modern History Museum. 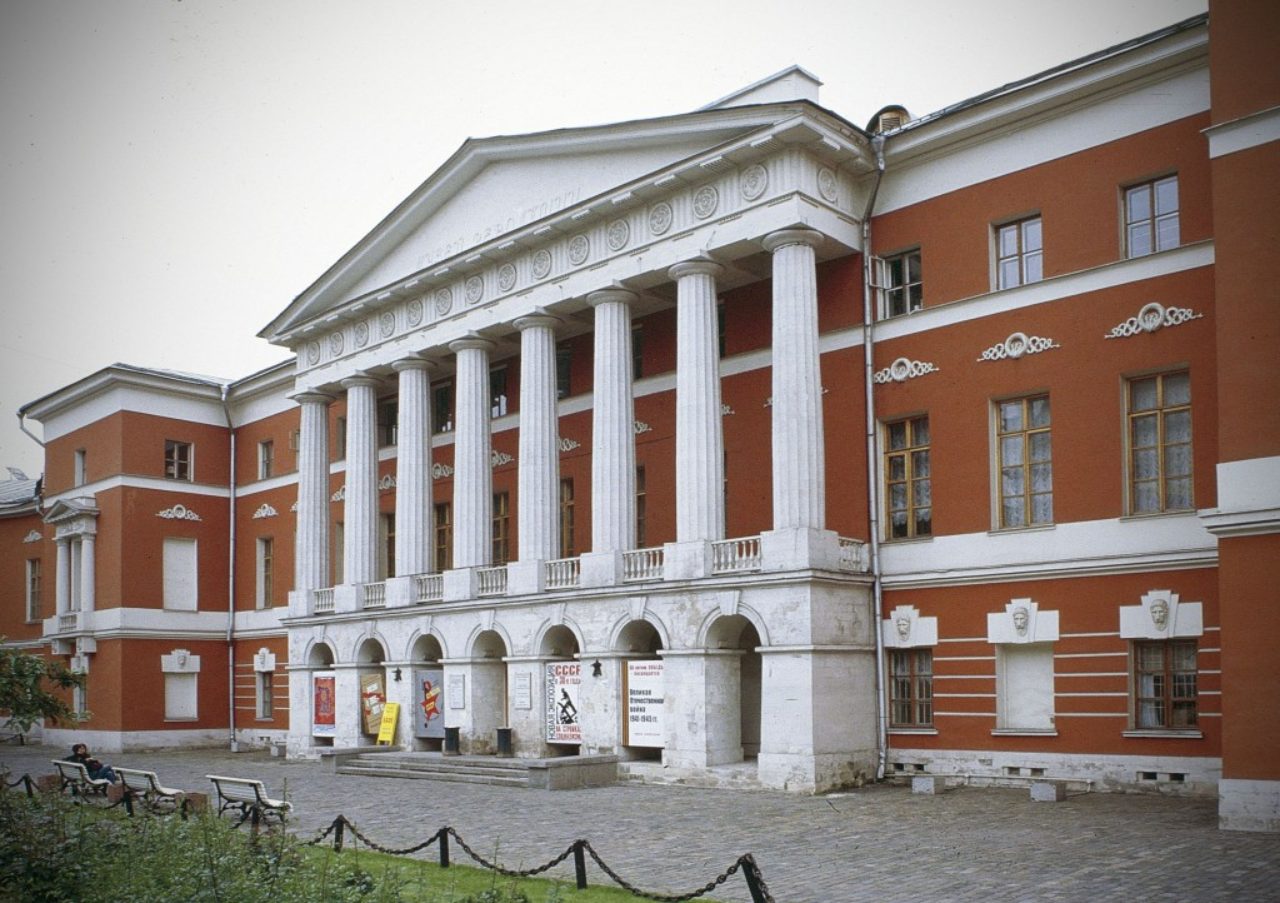 The world’s premier Parthenon-inspired work is undoubtedly Leo von Klenze’s Walhalla, completed in 1842 atop a vast terraced platform on the Danube River near Regensburg. (Figure 13) Commissioned by King Ludwig I of Bavaria as a German hall of fame, the building took its name from the Norse mythological place of the gods. Klenze chose the Parthenon for its design out of his belief that both the Germans and the Greeks shared the same ancestors in the ancient tribes of the Caucasus region. The north bank of the Danube was chosen as it marked the boundary between the Germanic tribes and the Roman Empire. The Walhalla is a faithful replica of the Parthenon but with the pediment sculpture depicting the defeat of the Romans in the 9 A.D. battle of the Teutoburger Forest (Figure 14) The opulent interior displays some 200 busts and plaques honoring figures of German culture, including such recent individuals as Konrad Adenauer and Albert Einstein. 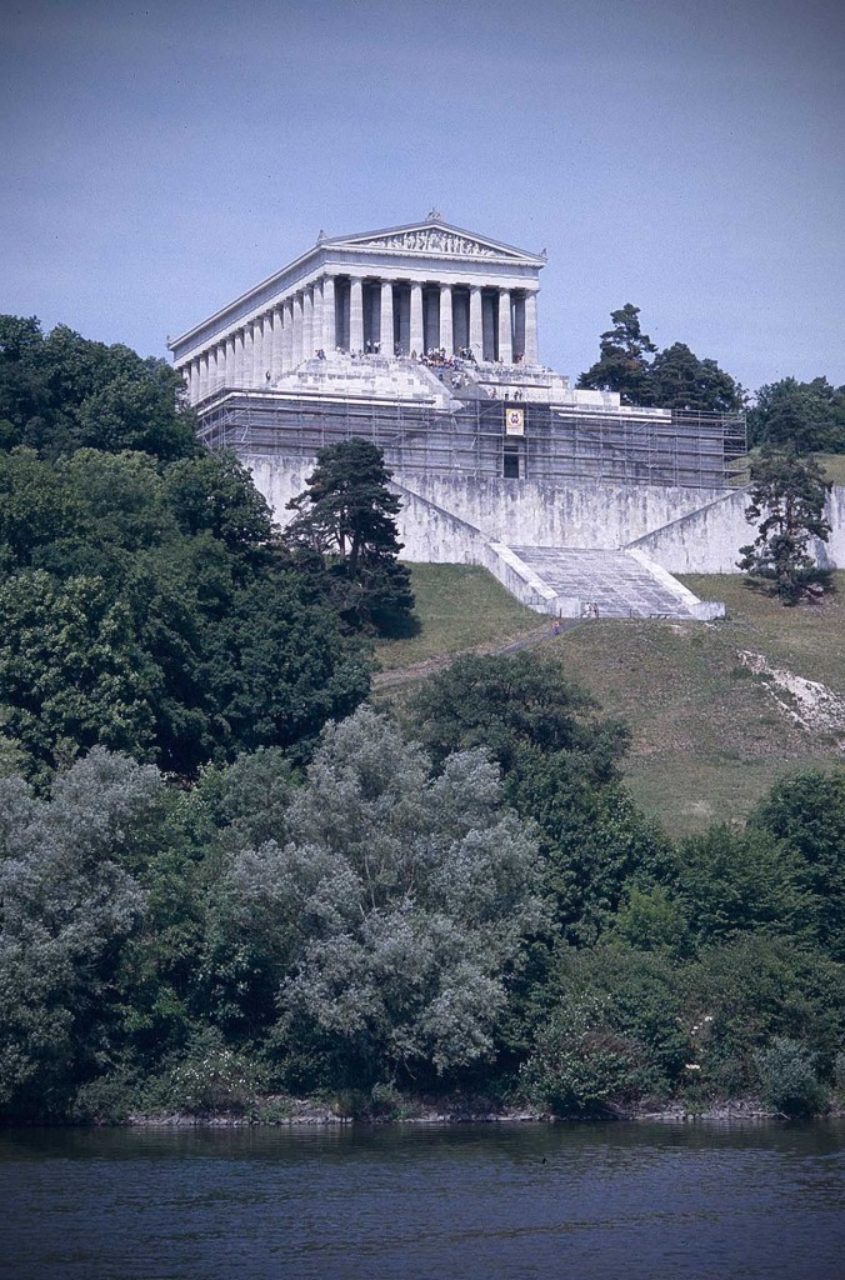 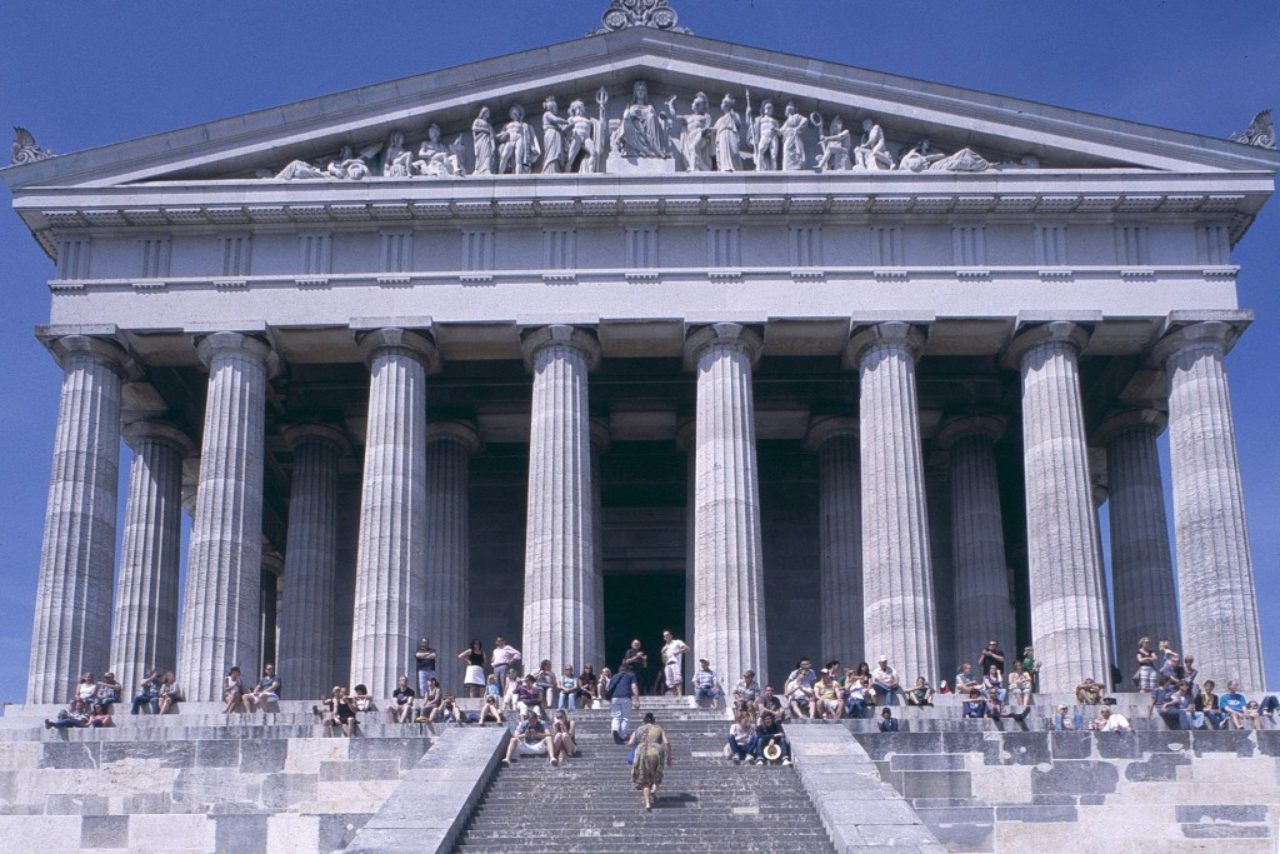 The chaste sublimity of the Parthenon is strongly infused in the Lincoln Memorial, perhaps the nation’s most familiar and admired monument. (Figure 15)  The temple image was regarded as the most fitting form to honor the man who preserved the Union. To make the design work as the west termination of the Mall, architect Henry Bacon ingeniously positioned the building to have its long side serve as the principal elevation and entrance. This orientation necessitated the use of a high attic rather than a gable roof. While the entablature takes its cue from the Choragic Monument of Thrasyllus, as illustrated in The Antiquities of Athens, the columns employ the Doric of the Parthenon. Indeed, the memorial’s end elevations repeat the octastyle configuration of the Parthenon’s porticos. Begun in 1912, the memorial took ten years to complete. Like the Parthenon, it is built of gleaming white marble. 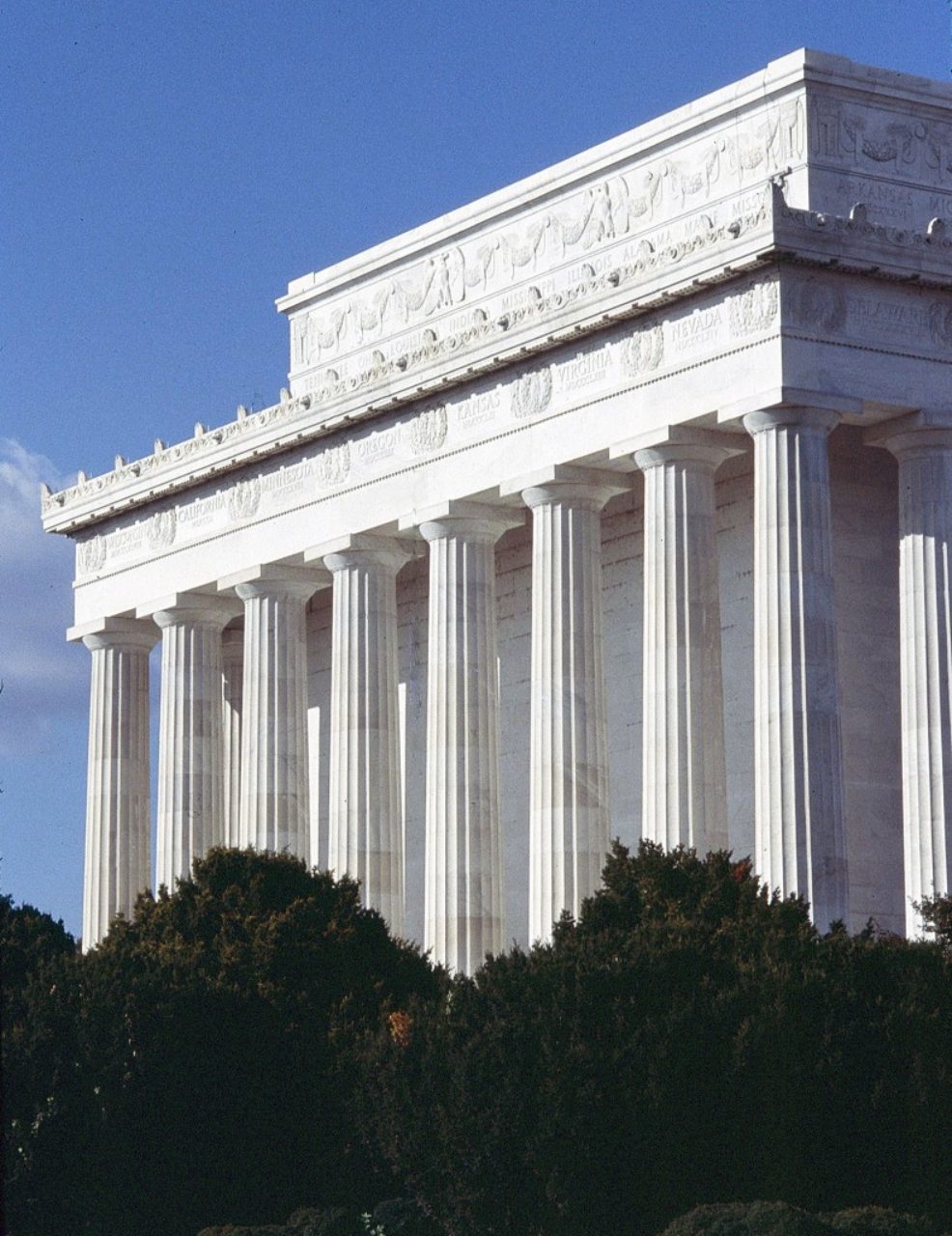 America’s one attempt to create an authentic copy of the Parthenon was realized in 1897 with the full-scale replica erected for Nashville’s Tennessee Centennial and International Exhibition. (Figure 16) The choice of the Parthenon resulted from Nashville’s moniker, The Athens of the South. Originally built as a temporary structure, the Nashville work suffered steady deterioration following the exhibition. Popular sentiment caused its rebuilding as a permanent concrete structure in 1920-25. Unlike other American Parthenon-inspired works, the Nashville edifice was outfitted with sculptural embellishments based on the ancient originals. The building’s relatively level site lacks the drama of the Acropolis, yet the Nashville Parthenon is the one structure in the country where we can appreciate the ancient Parthenon’s unmarred appearance. 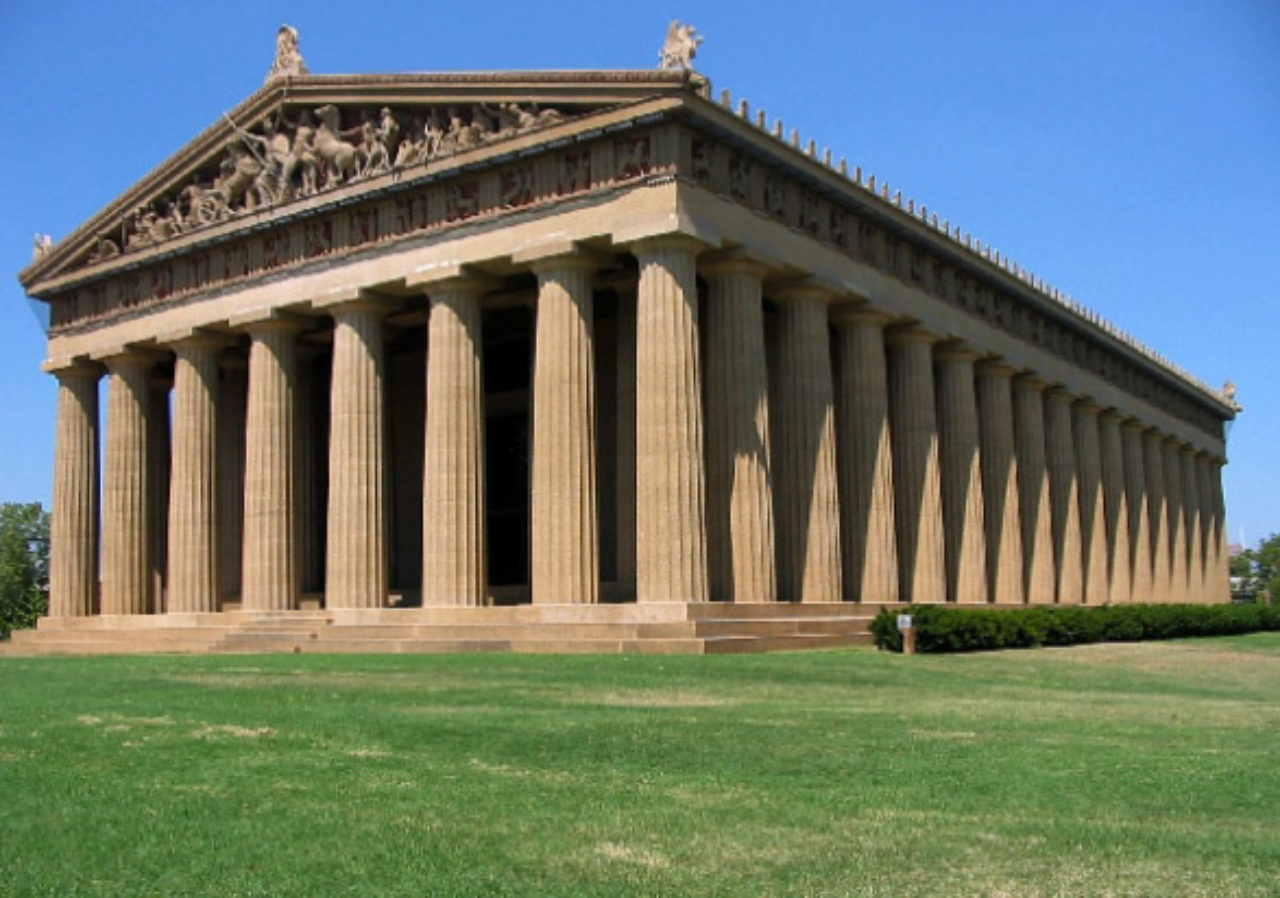 The repair and stabilization of the original Parthenon continues as a long-term project. Some elements will be restored and returned to their former positions, selected others will be reproduced and inserted to ensure structural stability. However, the Parthenon will remain a ruin. The several works presented here celebrate this great monument and help us appreciate its unique character. A question for the 21st century is whether the Parthenon should continue to serve as a model for new classical-style works.