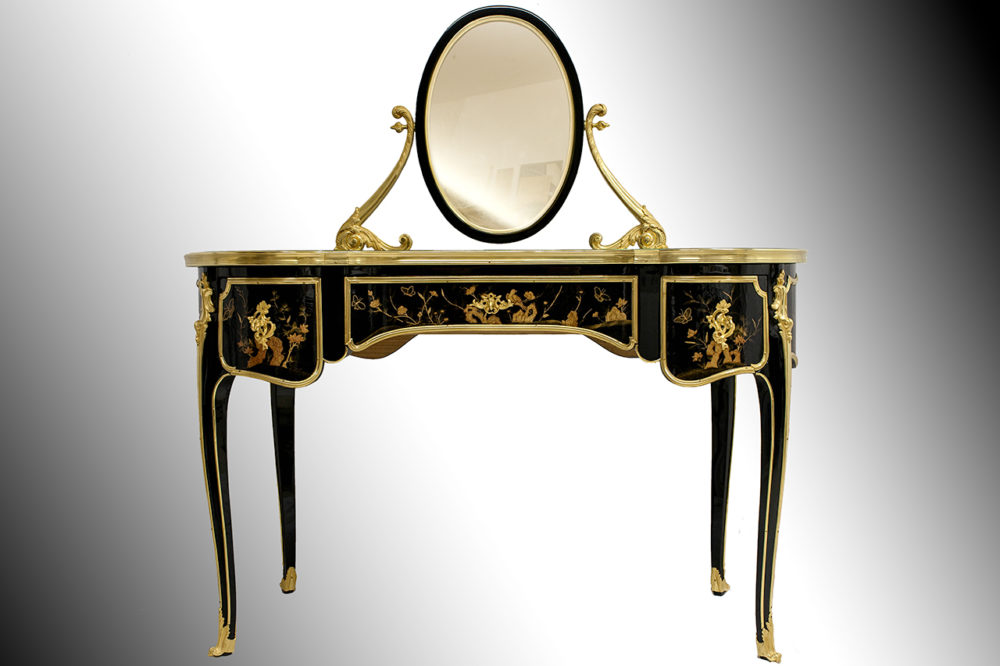 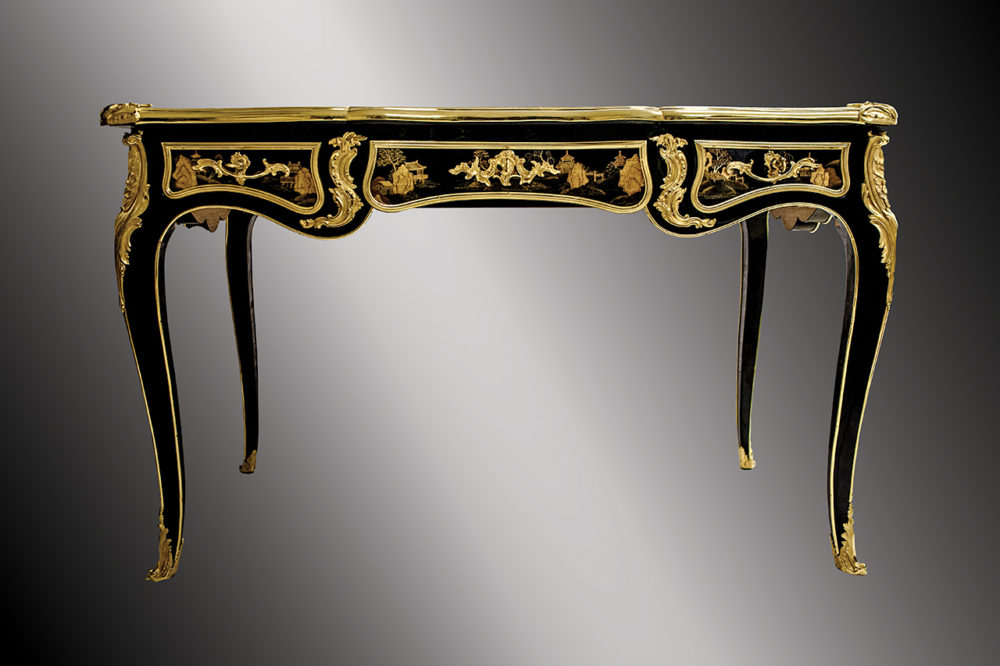 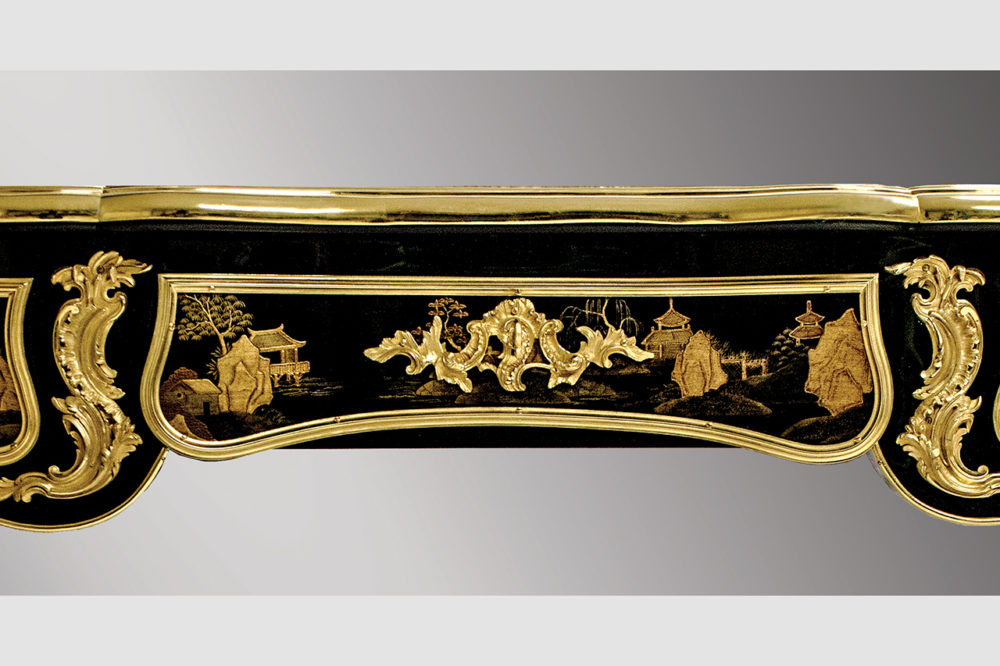 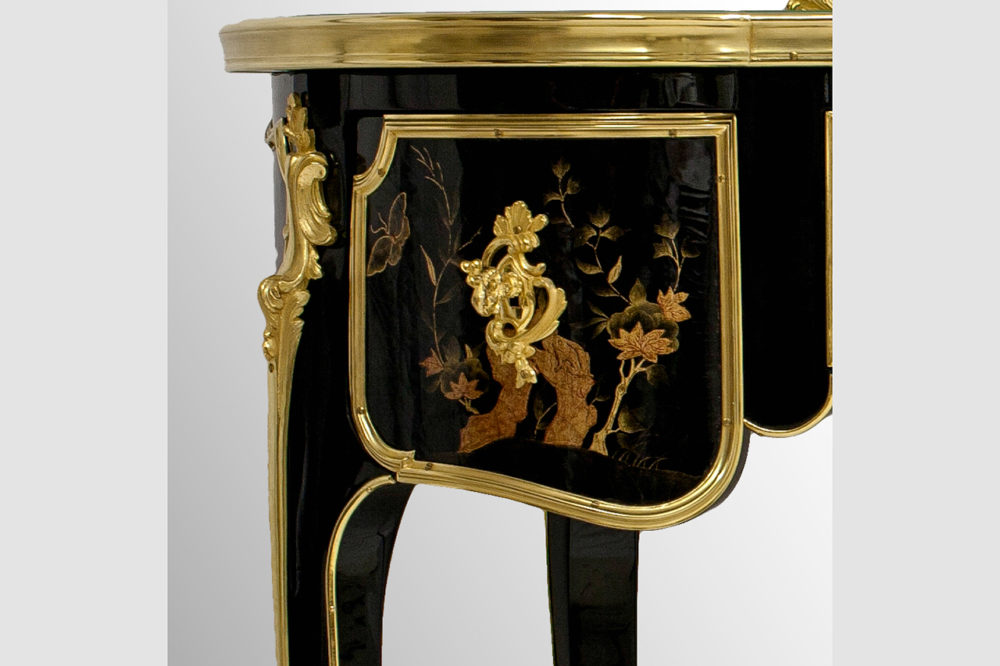 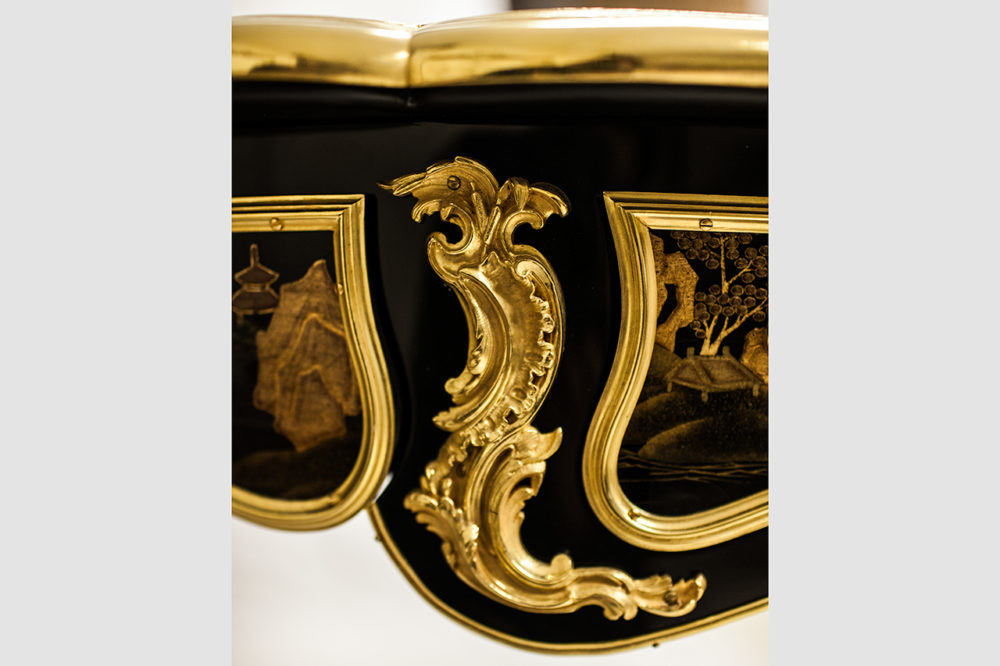 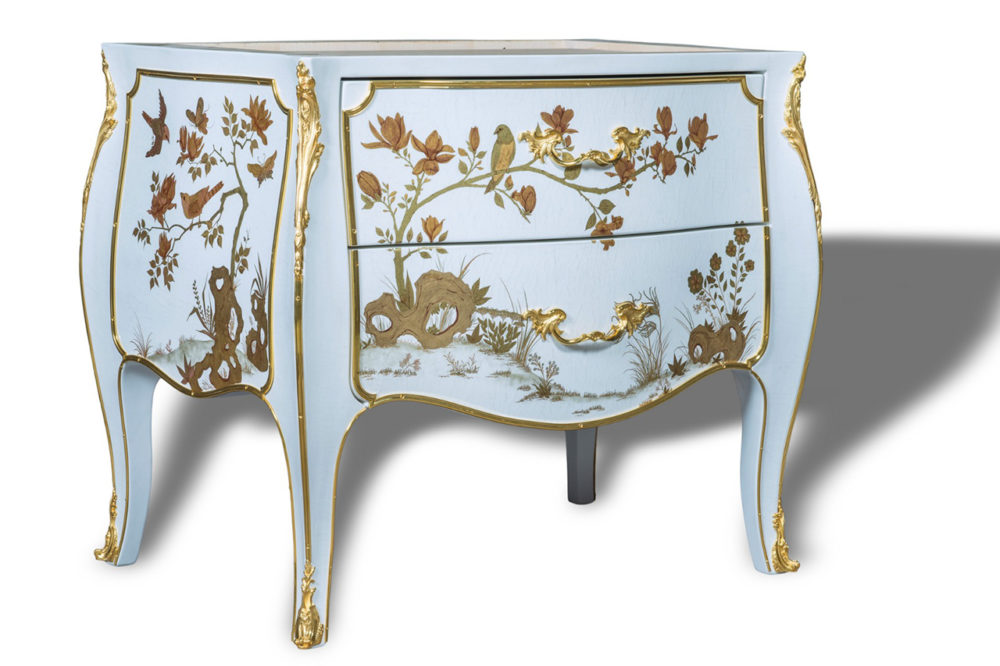 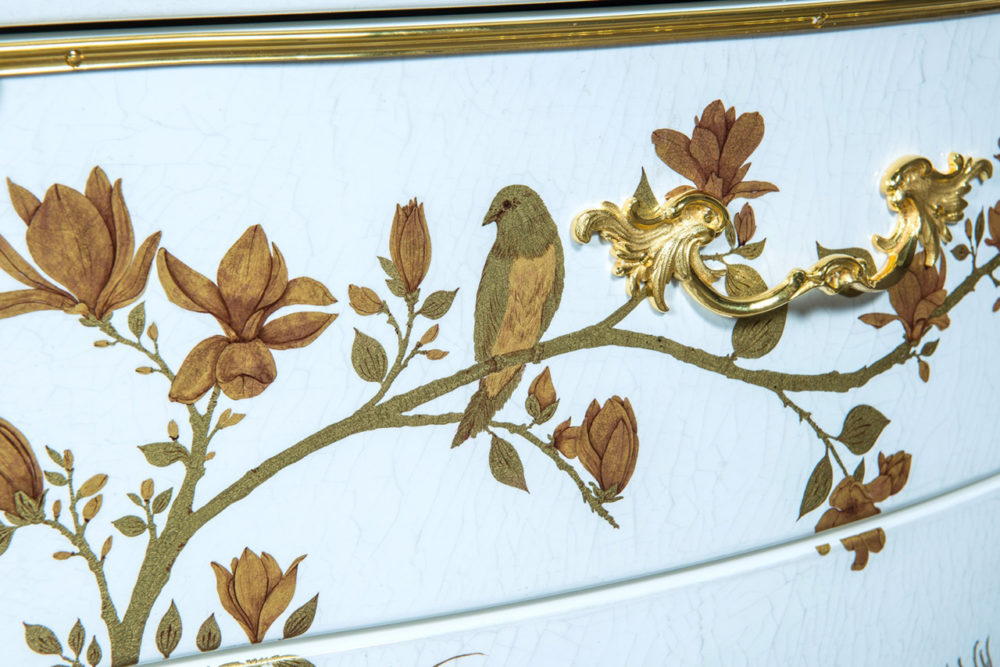 The History of Chinoiseries in France

Editor's note: The ICAA is pleased to showcase projects, artworks, and inspiration submitted by our members. The following was written by Valentin Goux, Vice President at ICAA member firm RINCK.

In 1368, while the Hundred Years’ War was still raging in France, five thousand miles away, China’s new Hongwu Emperor Zhu Yuanzhang had ousted the Mongols from power and established the Ming dynasty. Galvanized by the end of foreign dynastic domination, the Middle Empire closed its borders to the rest of the world, with very few exceptions. Seventy years earlier, in 1298, the story of a Venetian merchant in the court of Kublai Khan had sparked tremendous interest in Europe. Marco Polo’s Il Milione (Le Devisement du Monde or Livres des Merveilles du Monde in French and commonly known in English as The Travels of Marco Polo) cemented the legend of an immensely rich and exotic China, engendering, as its publication broadened, admiration and astonishment across the continent. Such avid interest could only reinforce the new dynasty’s decision to close the country’s borders decades later. Who therefore knew what wonderful treasures were hidden within this immense empire? Ties to the outside world weakened, to be replaced by lore. 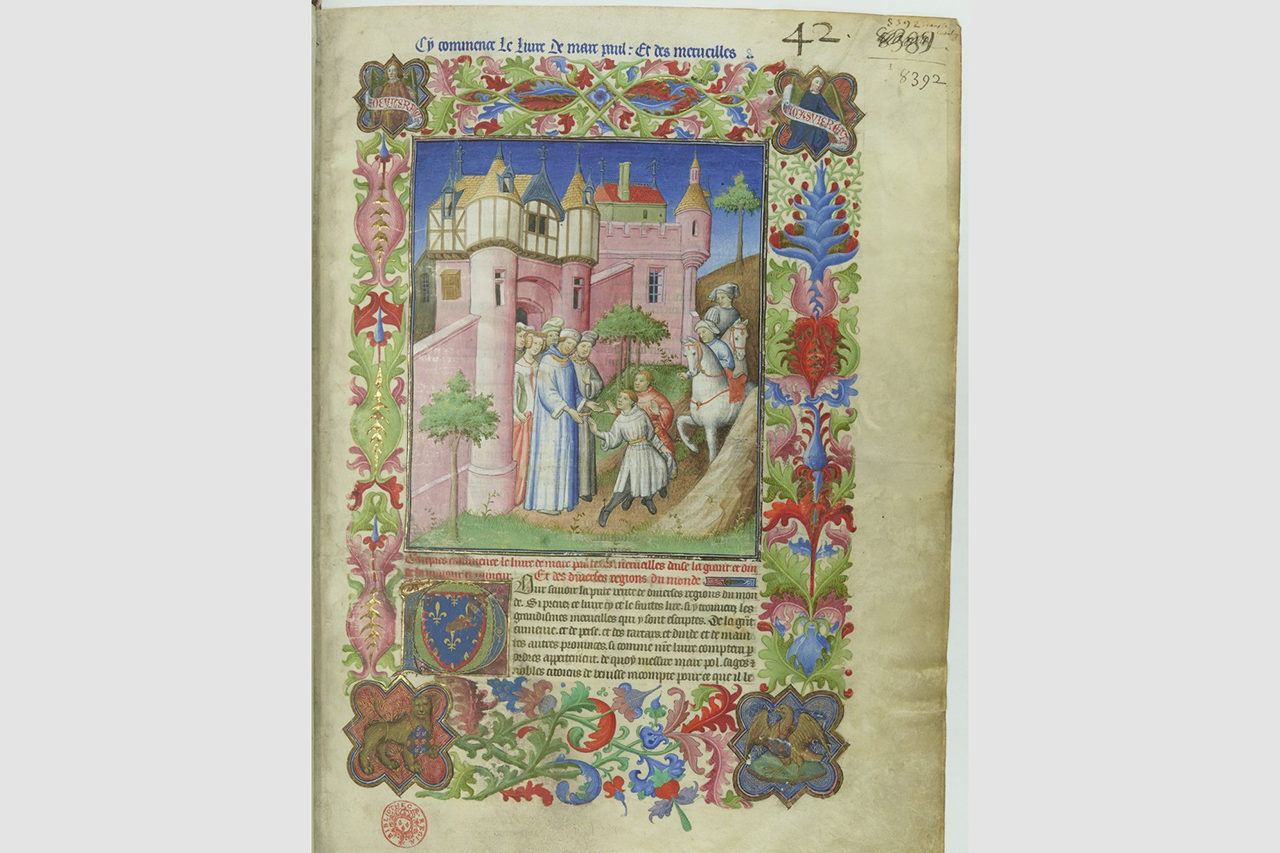 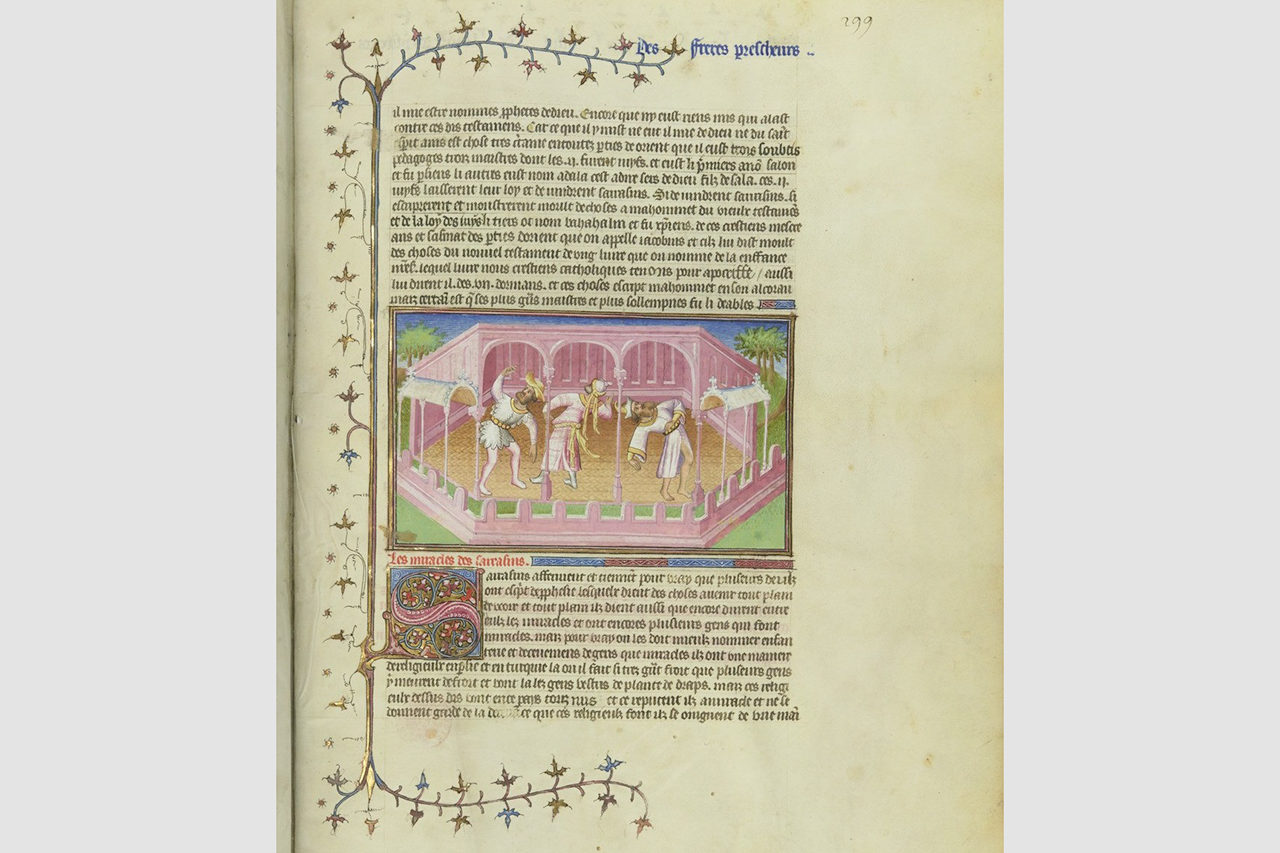 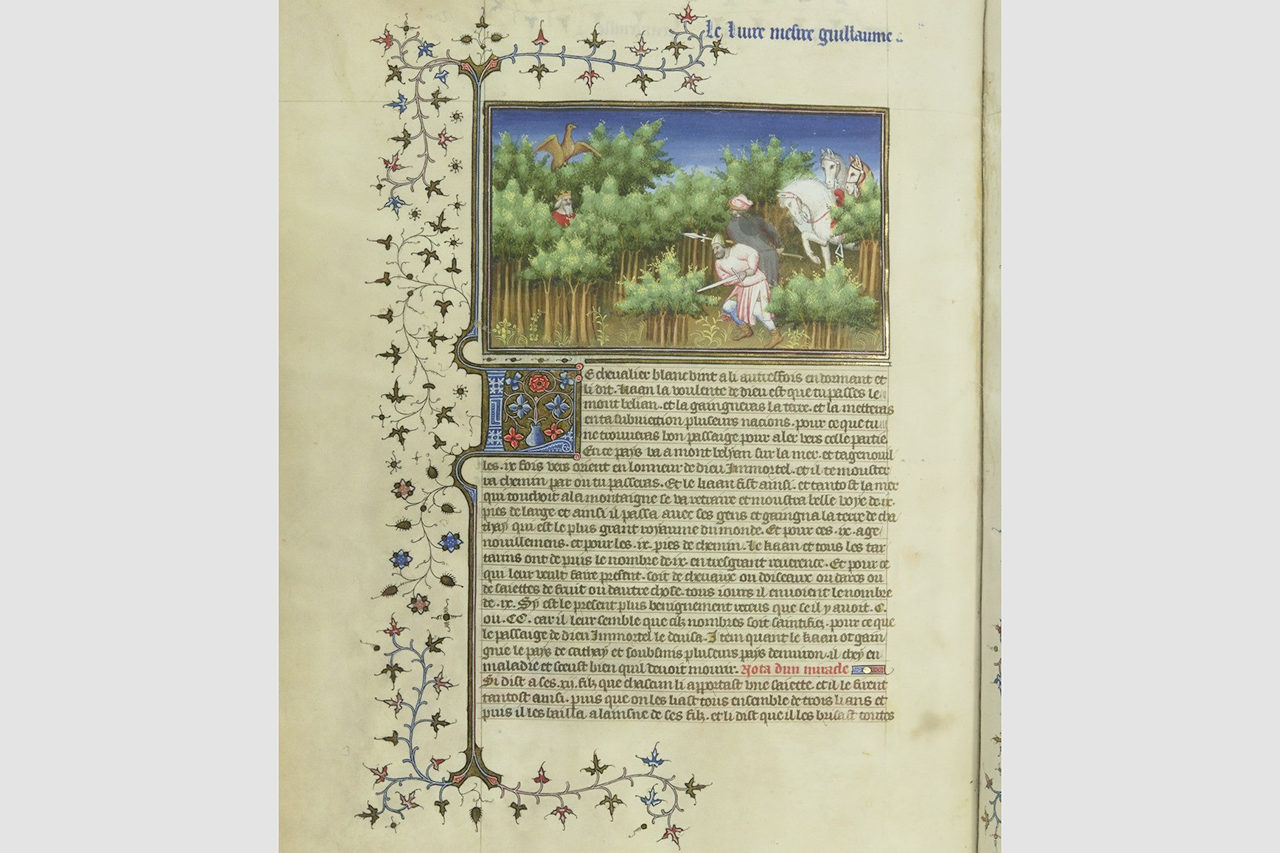 It was not until the early 16th century that Portuguese traders tried, with little success, to settle in China, followed closely by the Jesuits, this time permanently. In 1601, the dawn of the 17th century, missionary Matteo Ricci became the first European to enter the emperor’s court. His stories, and those of his companions, gave new impetus to Europe’s myths about the Middle Kingdom. The East India Company began trading from Canton, exporting tea, silk, and porcelain—the costliest goods—to London. The remaining European nationalities—the Dutch, the Portuguese, and then the French—followed suit. In addition to cargo, the sailors returned with many rarities and curios, thereby introducing Chinese lacquers to the European public.

This is how, early in the century, Chinese objects developed a following of wealthy collectors. Cardinal Mazarin’s furniture inventory, drawn up in 1653, detailed furnishings, brocades, and silks in the Chinese style. Canton began exporting special designs created for the European market, with exaggerated ornamentation that satisfied those with a taste for Baroque style, but which would be viewed as vulgar in China. In 1665, the publication of Mr. John Nieuhoff's remarkable voyages & travells into ye best provinces of ye West and East Indies further reinforced this appetite for the exotic, being filled with extraordinary drawings that influenced several generations of architects and ornamentalists. Soon, Louis XIV began wearing Chinese-style ball attire and even ordered the construction of the Trianon de Porcelaine on the Palace of Versailles grounds. 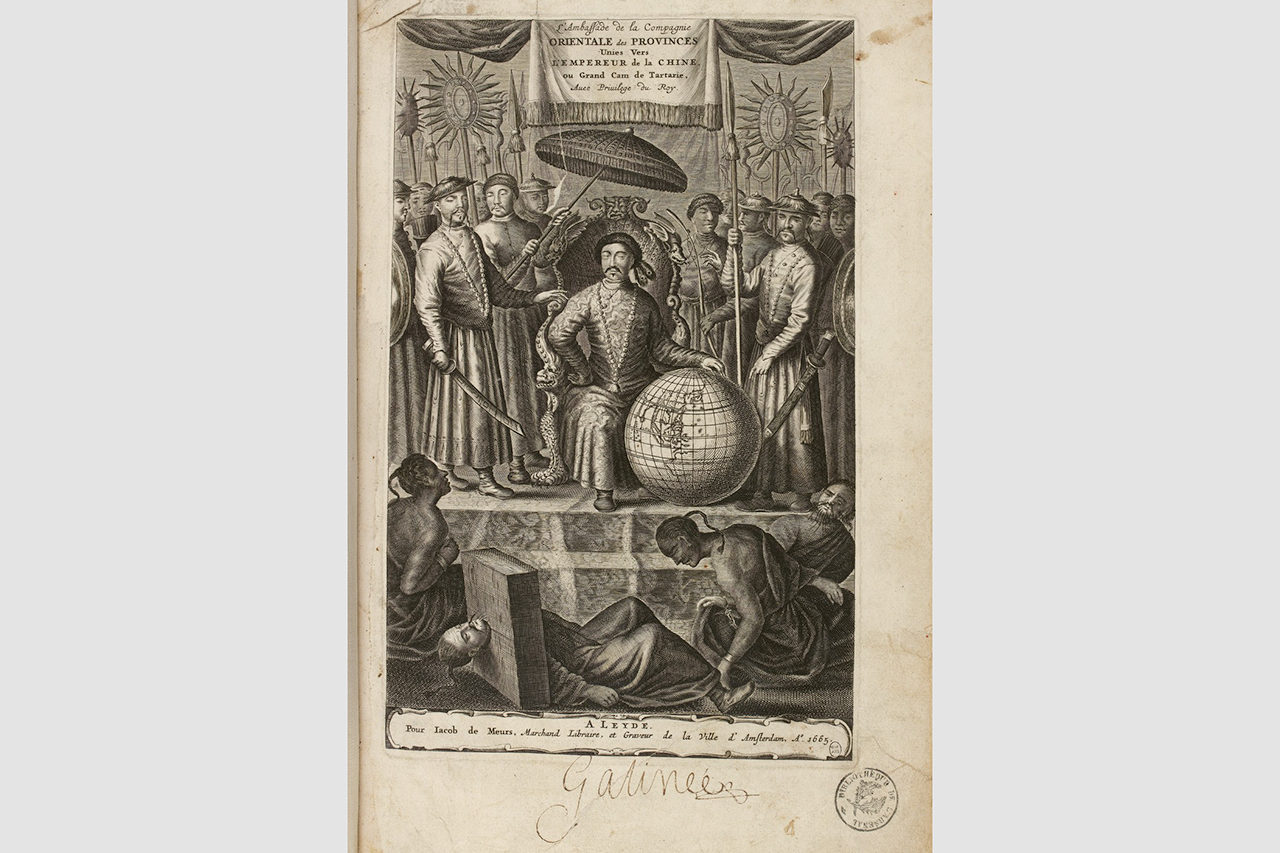 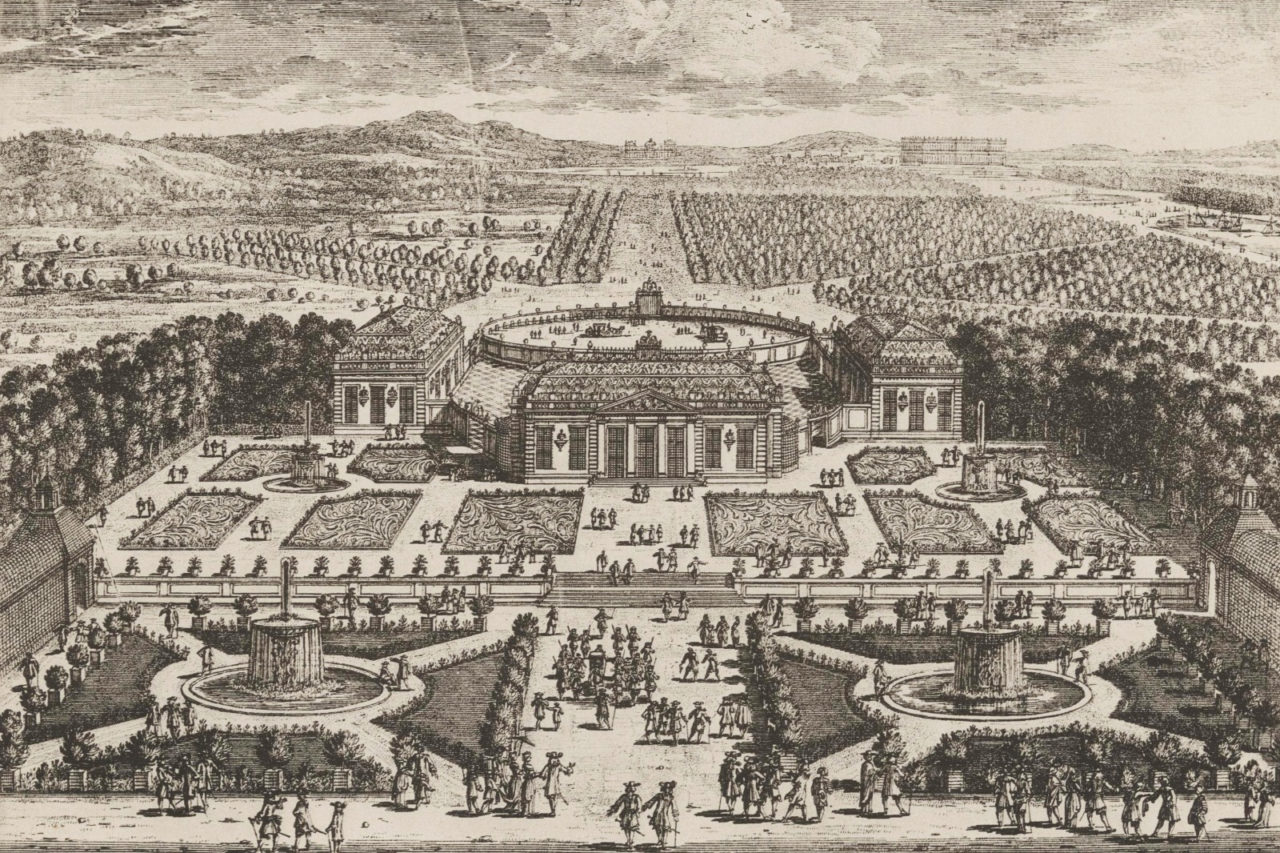 Of course, those caught up in this major orientalist craze had little grasp of what the Far East was truly like, resulting in a hodge-podge of influences, a carefree combination of Chinese, Japanese, even Indian and Persian ornamentation, as well as exotic animals and their ornamental expressions, such as Singeries. One need only hear Rameau’s Baroque opera Les Indes Galantes (The Amorous Indies), presented in 1735, to marvel at the imprecise and perfunctory vision held of the non-European world: In a single work named for the Indies, four acts represented, respectively, the Turks, the Incas, the Persians, and the American Indians.

Among the objects brought back from China, lacquer wares and works were quickly adopted by Europeans and became extremely popular. Cabinetmakers began to experiment with adaptations of the panels, incorporating them into furniture or woodwork. Across Europe, hoping to make the most of the trend, many attempted to reproduce such works, but failed because the sap from Rhus verniciflua (the Chinese lacquer tree, since scientifically renamed Toxicodendron vernicifluum), essential to such Chinese oeuvres, was not available in Europe and dried out during the long return trip from Asia. This sumac variety was the origin of Asian lacquers, with some variations depending on the country, be it China, Japan, or Vietnam. Nevertheless, all made the same basic use of the resin, applied in five to seven layers.

Chinese lacquers were prepared on paper before being glued onto the final support, creating a cracked appearance, while Japanese lacquers were applied directly to the object and were more water-resistant. Those from Vietnam incorporated other materials, such as mother- of-pearl or eggshells. Lastly, a Chinese polychrome technique was improperly given the name of Coromandel lacquer, after an Indian port of call for the vessels carrying the products: The city’s name was marked on the transport crates, leading the people of that day to believe it to be the place of origin.

As demand exceeded supply in Europe, the entire continent continued to attempt reproduction of Asian lacquers, with initially mixed results. The Dutch made greater headway, to a degree, until the Martin brothers of Paris invented a varnish to which they would lend their name: Vernis Martin. First designed as a substance to join various imported lacquer panels without demarcation, Martin varnish would soon facilitate the creation of wholly French imitations. The process, using copal resin, first appeared in the Faubourg Saint Antoine in 1728, barely five years after Louis XV’s personal reign began.

This reign would soon be seen to dovetail with the triumphant rise of chinoiseries. After the sumptuous-yet-stiff style of the century of Louis XIV, and an endless reign marked by the return to the old king’s religion, the aristocracy wanted to let its metaphorical hair down. A bon vivant, libertine spirit became prevalent during the regency of the Duke of Orléans from 1715 to 1723, taking the form of countless festivals, balls, and dinners. This spirit is predictably found in the ornamental language of that time, with the widespread appearance of the Rocaille style – “Rococo” for the rest of Europe –, which would continue into the reign of Louis XV. Rocaille, the first European style to showcase asymmetry, was fertile ground for chinoiseries and would generate an exponential and unprecedented increase in their use. With the help of Vernis Martin, furniture was covered with Chinese-style scenes. There were even Asian-inspired ornaments on the boiseries, whether lacquered or painted, as with the salon chinois in the Château de Champs-sur-Marne, painted by noted French artist Christophe Huet in 1748. This type of décor can also be seen in the Château d’Haroué in Lorraine, the work of Jean Pillement, one of the day’s great ornamentalists, who helped propagate the passion for this Chinese-like style across Europe. The most famous painter of the time, François Boucher, also embraced chinoiseries, gaily depicting them in his compositions.

Bernard II Van Risamburgh, a Dutch-born Parisian master and one of the great ébénistes of the time, notably influenced the Louis XV style, as did a number of his peers. He was a pioneer in curving Chinese lacquers, making it possible for them to be adapted to the rounded, roomy shapes of fashionable furniture. One of his peers, Joseph Baumhauer,

specialized in Japanese lacquers. The entire Faubourg Saint Antoine was caught up in the creation of chinoiseries, as was the rest of Europe, whether in the form of furniture like Thomas Chippendale’s designs in England, or boiseries, like those of the Japanese chamber at the Schloss Hetzendorf.

As the reign of Louis XVI neared, however, the transition style heralded the end of Rocaille. In the collective imagination, there was a return to an ancient purity of line, simplified aesthetics, and lighthearted pastoralism. 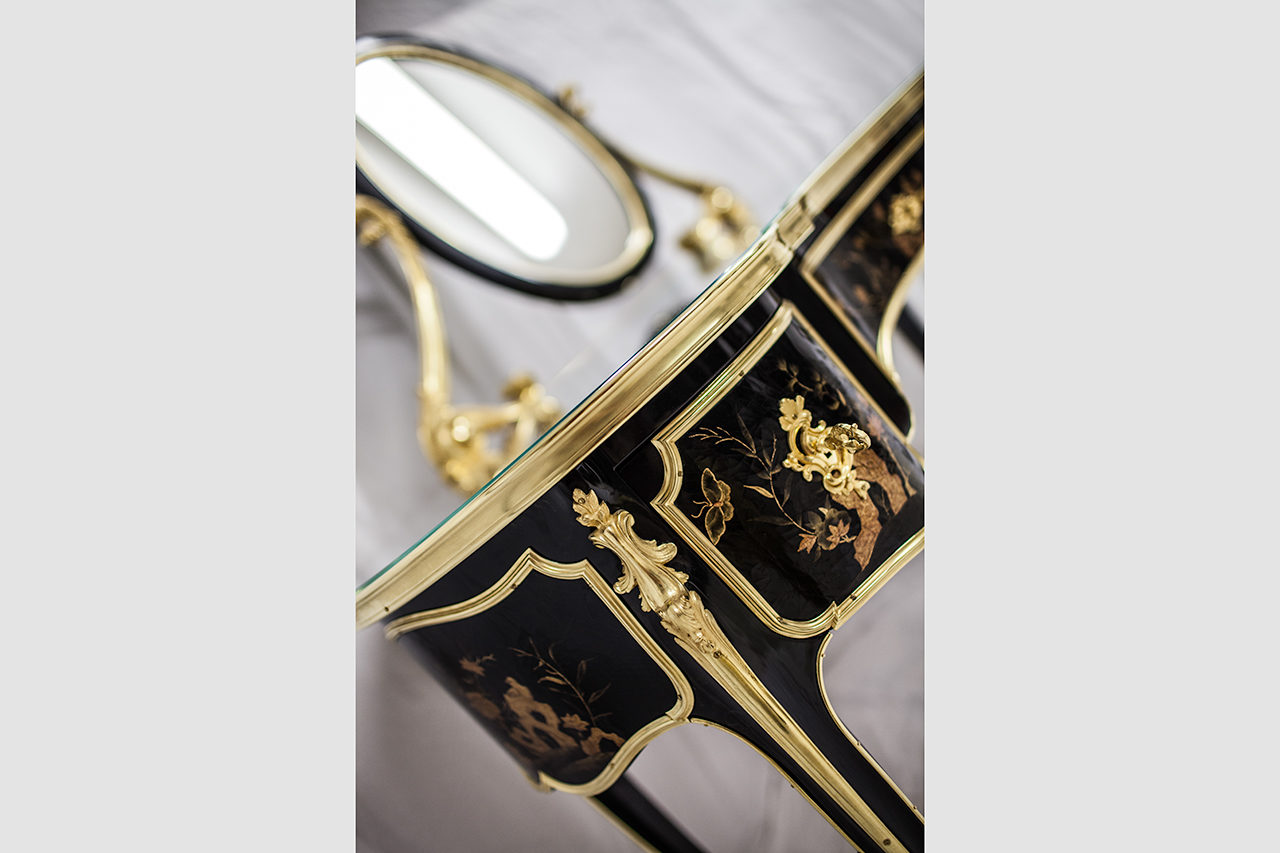 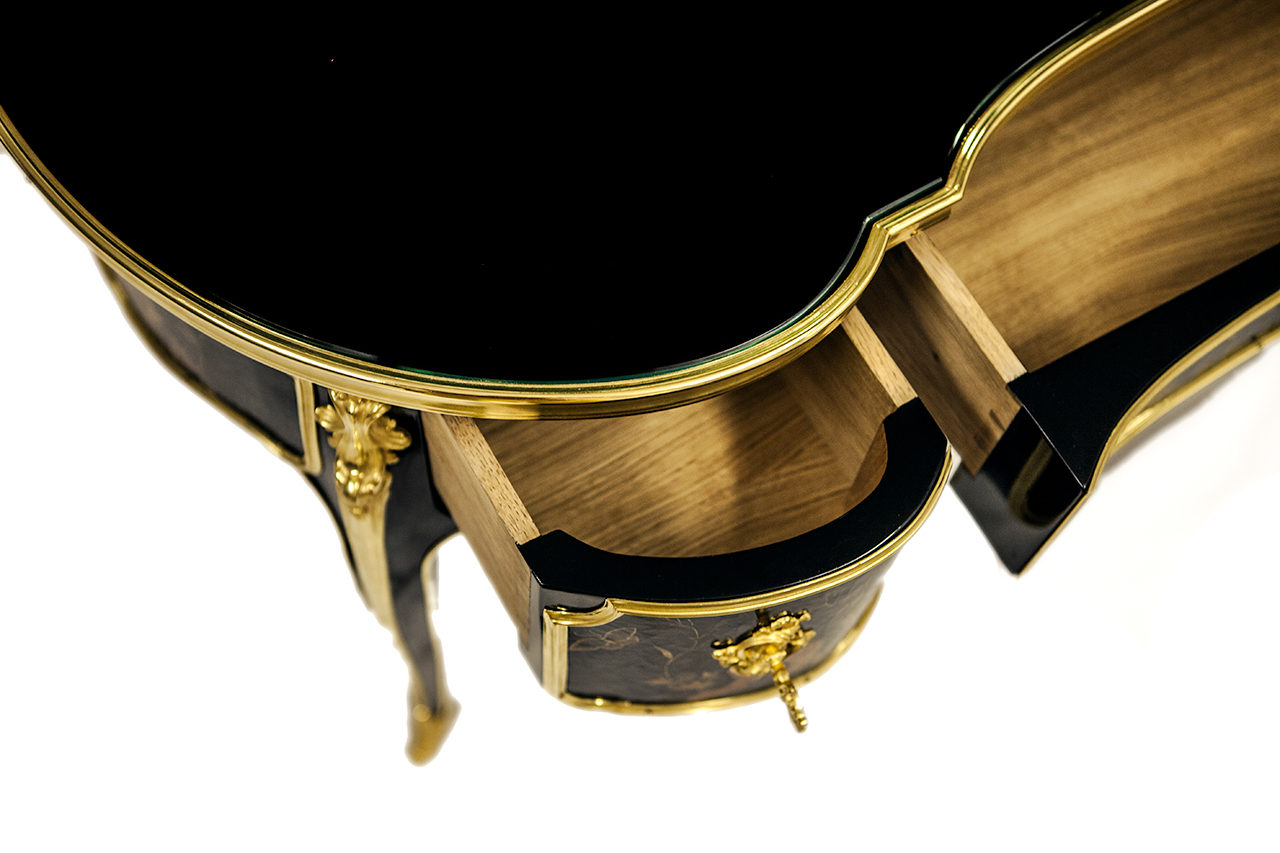 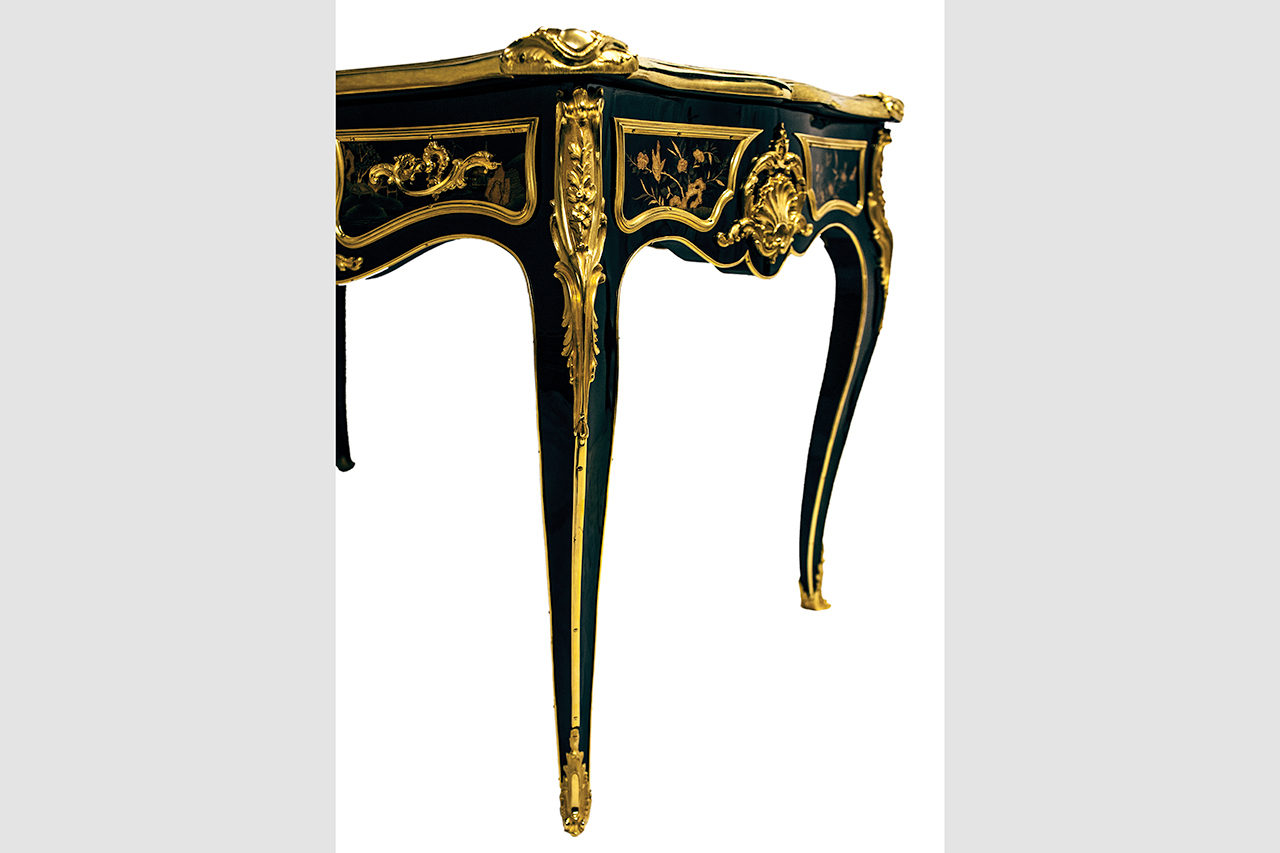 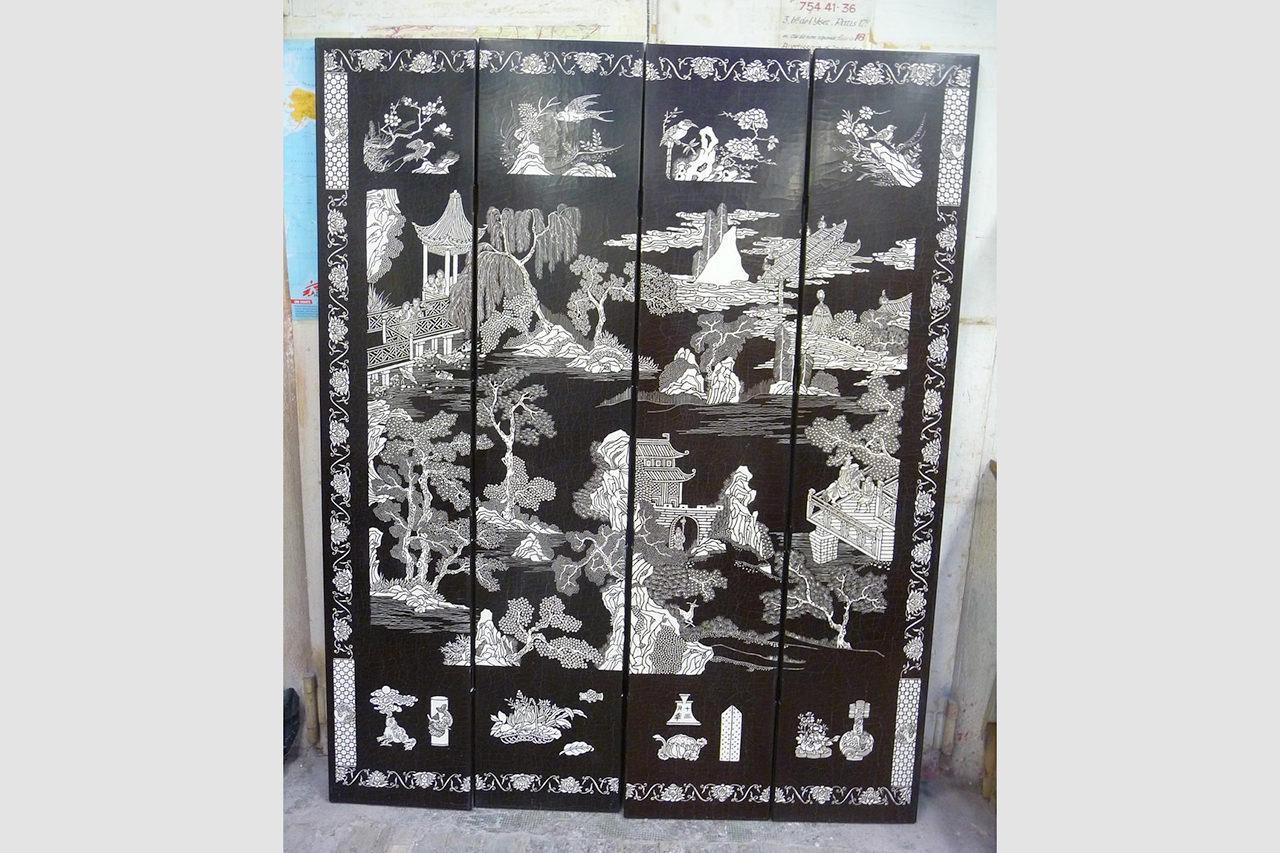 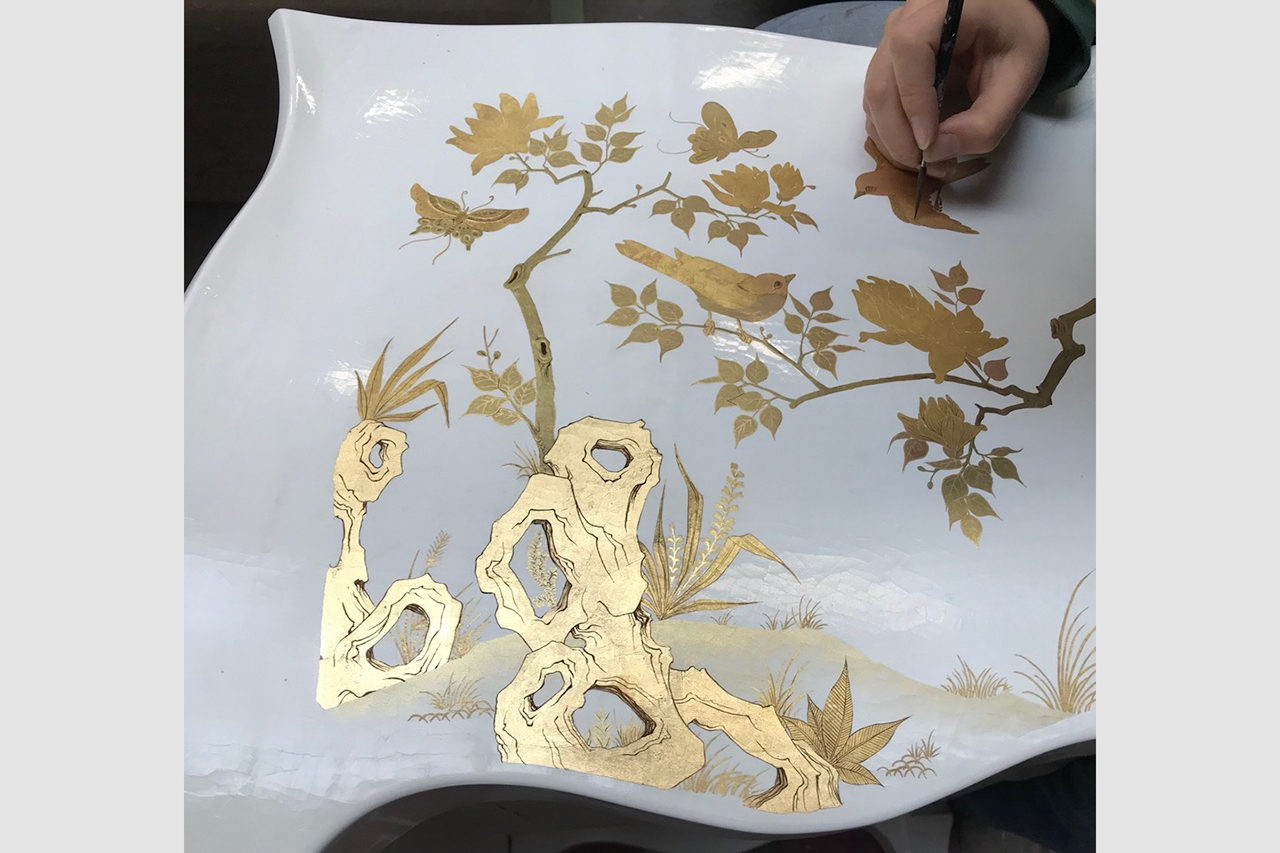 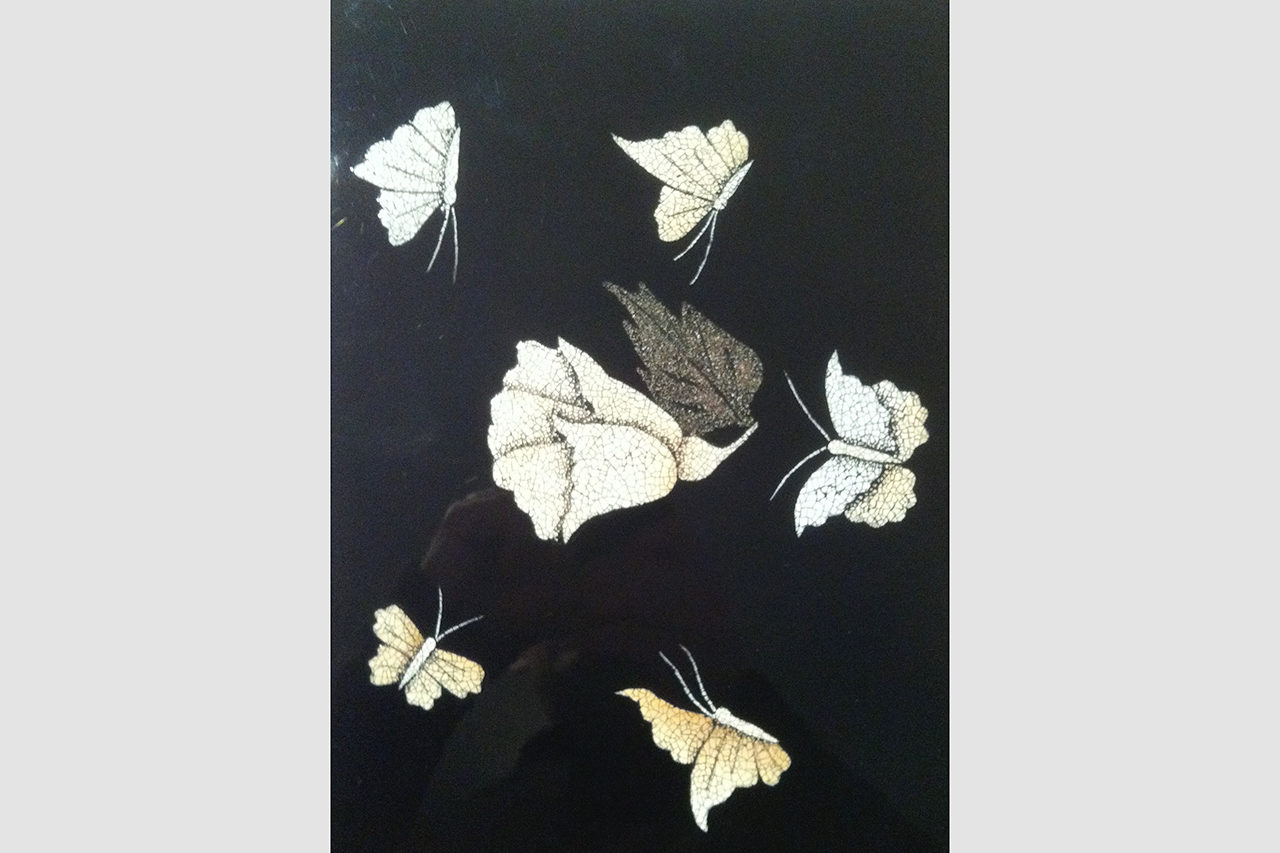 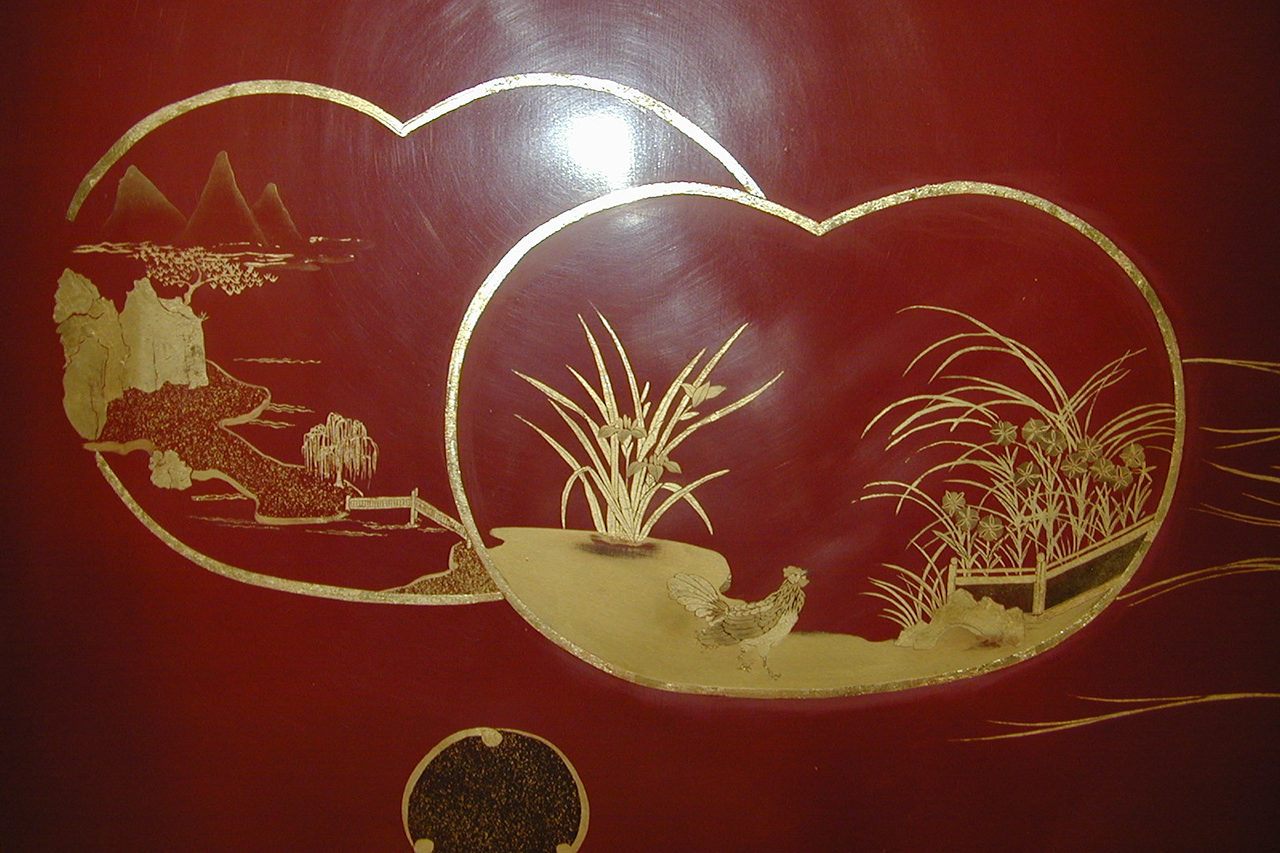 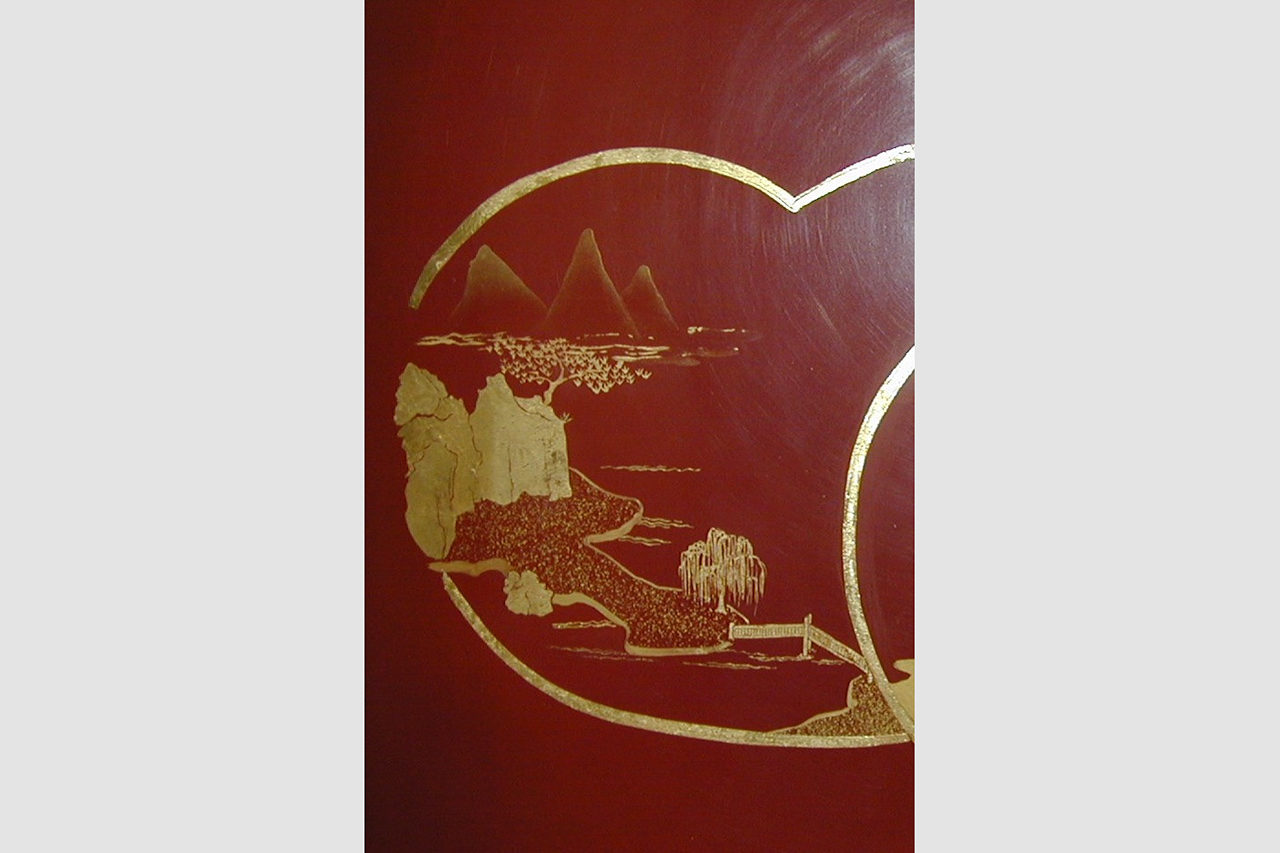