Who among us doesn’t remember the first time our parents or our school took us to the theater? For me it was to see a matinee of Wagner’s The Flying Dutchman at the “old” Metropolitan Opera House on Broadway and West 39th Street. It was a grand spectacle that took place in Carrère and Hastings’ 1903 golden auditorium resplendent in gilded bronze, lustrous marble, and gold damask stage curtains. There was an incredible set of a gigantic sailing ship fighting a stormy sea, an orchestra playing beautiful music, and singers belting out the most incredible German libretto. It was a momentous occasion I will never forget.

Many years later, I attended a play in the antique amphitheater of Epidaurus. Nothing had changed there for 2,300 years, except perhaps that cushions were given out to cover the bare stone of the benches. The acoustics were superb, reaching clearly to my high seat chosen for the view. I felt as if I was participating in the most ancient and classical form of catharsis. The play was Hecuba by Euripides, written in 424 BC. It has been performed all over the Western world ever since and 20 years ago I saw it again at San Francisco’s American Classical Theater with Olympia Dukakis in the title role.

The Ideal City of Baltimore, a 15th century Italian Renaissance painting that is kept at the Walters Art museum, is usually attributed to the architect and artist Fra Carnevale. On both sides of the wonderful perspective are large palaces. In the very center is a Roman triumphal arch reminiscent of the Arch of Constantine in Rome. To its left stands a building modeled after the Roman Colosseum. It is clearly a place for theatrical productions. It stresses the importance of providing entertainment for the well-being of the people in the ideal city.

Our modern theaters derive from the theaters of the Greeks and the Romans. Vitruvius, the 1st Century BC architectural scholar described in his 5th book of De Architectura the construction of theaters in detail. He describes two kinds of theaters: the open air or large amphitheaters used by the Romans to show gladiators or animal fights, and the smaller theatrum tectum (roofed theater) or odeon, the direct ancestor of most of our present day theaters. He explains the layouts and even details for good acoustics.

While the London area theaters offered 5,000 seats in the late 16th century, and 10,000 in 1610, the construction itself was a fairly simple thing, polygonal in plan to give a circular effect, built in timber and plaster, mostly open to the sky in the center. The upper level of the stage was used as a balcony, for instance to play Romeo and Juliet. What else do you need when the playwrights are called Shakespeare, Ben Johnson, or Marlowe? 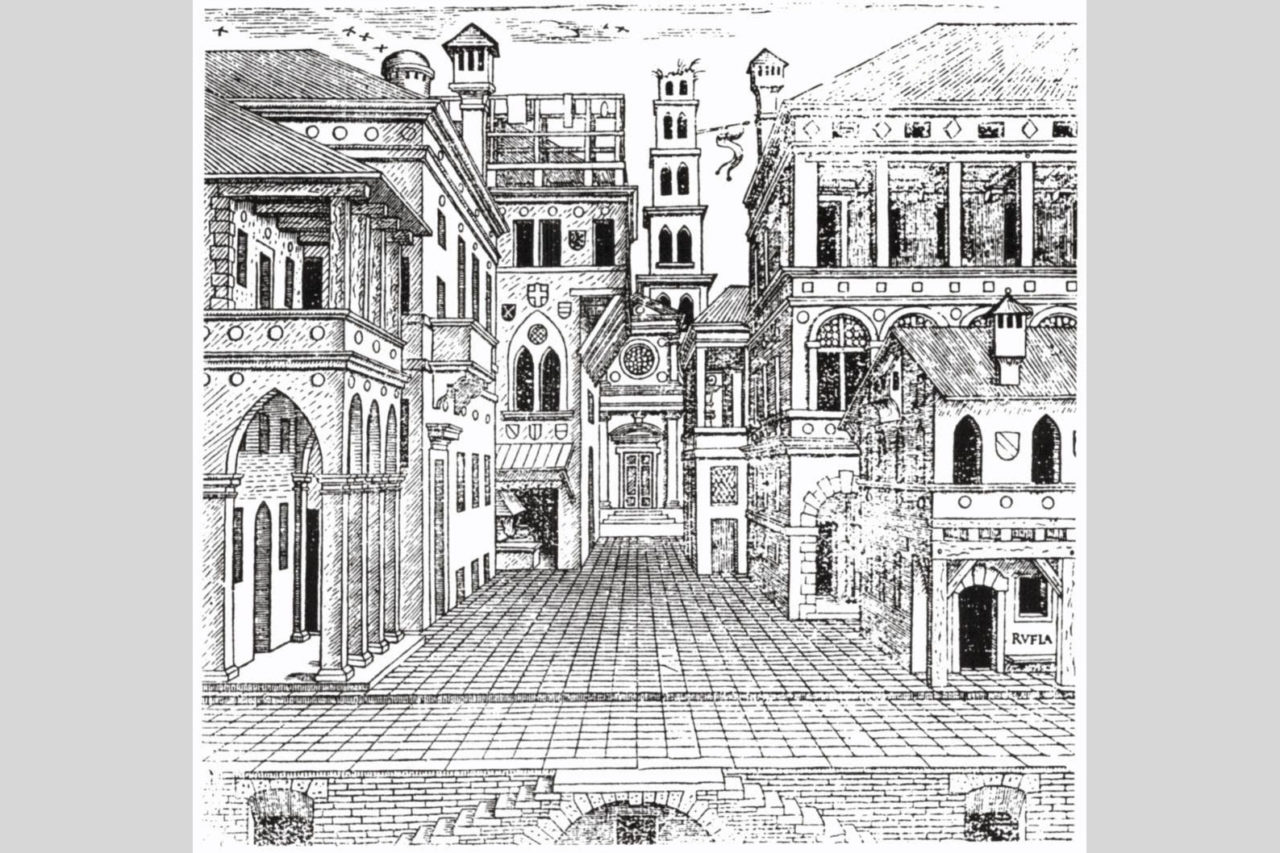 A design for a Comic stage set by Serlio

A design for a Tragic stage set by Serlio

Indeed, for a long time theaters were fairly simple constructions. The Italians developed extraordinary technical skills for theaters, and it was in the Renaissance that they became increasingly complex. Princes and patrons hired the most famous architects to build elaborate theaters with decorations by the best artisans of their time. In 1545 Sebastiano Serlio published his Trattato di Architettura, in which he worked out the stage of the early 16th century. Andrea Palladio’s Teatro Olimpico in Vicenza was finished in 1585 and has remained intact to this day. The reason why Leonardo da Vinci painted so few large canvases is because, having followed Francis 1st to France, he was extremely busy conceiving the decor for the king’s lavish stage sets and parties.

The classical theaters that I admire most are concentrated in the Veneto. There are historical and cultural reasons for which the Venetians conceived the most remarkable theaters before anyone else. 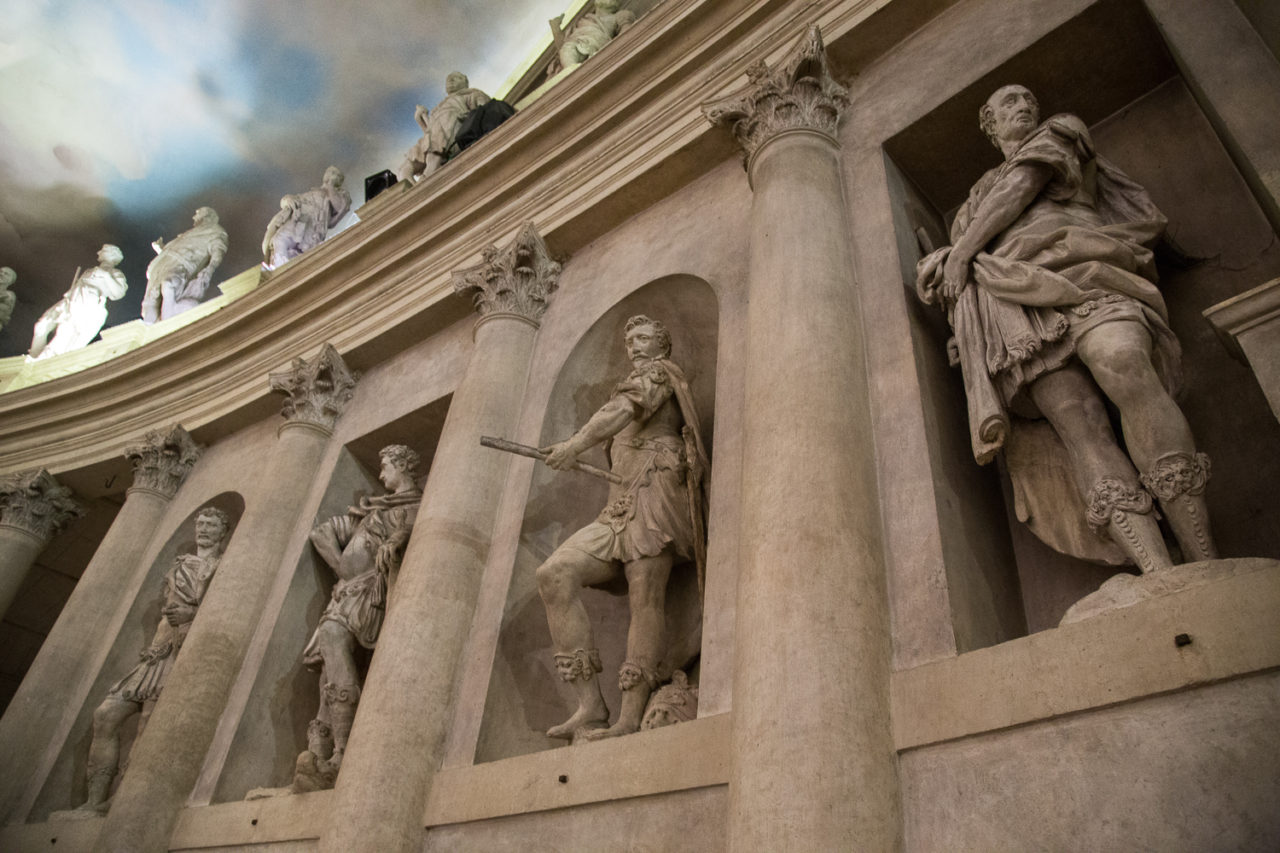 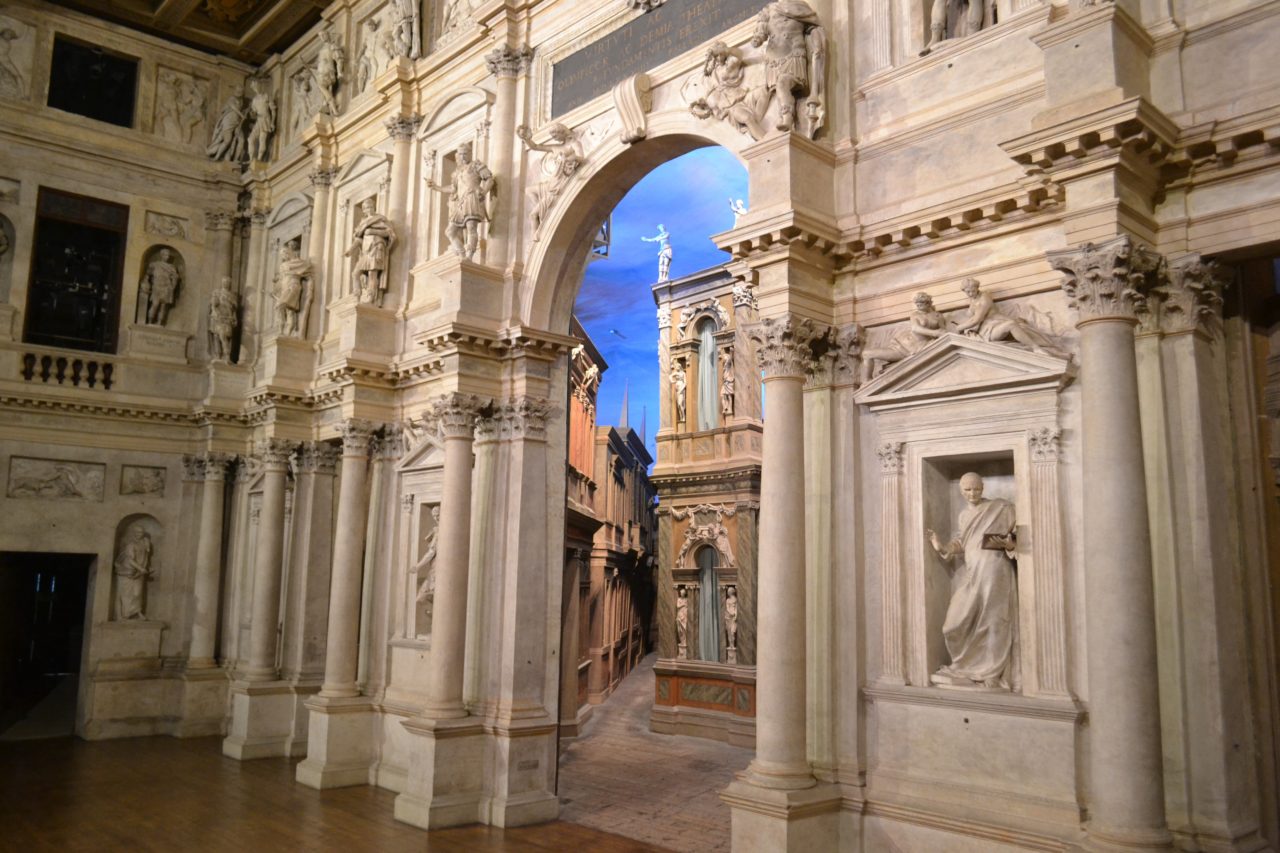 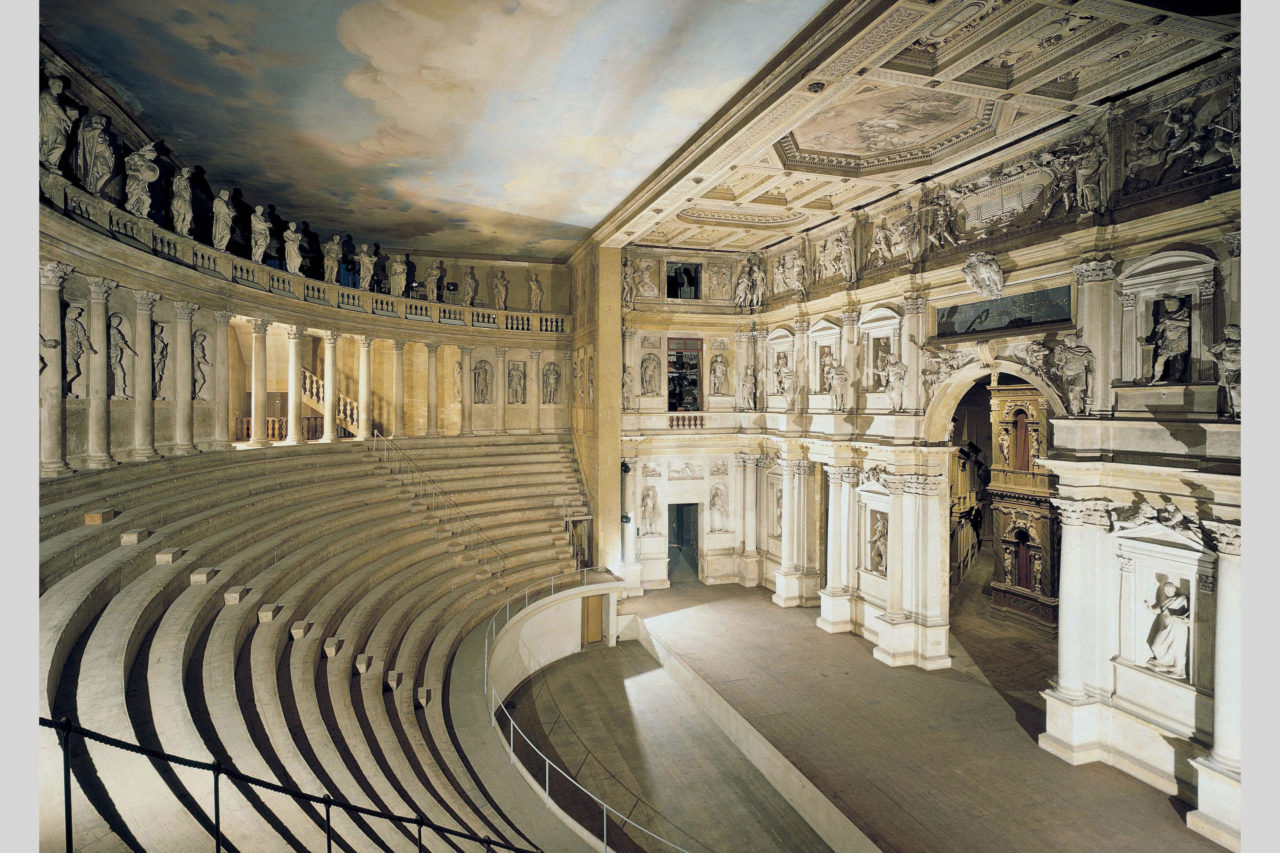 The Republic of Venice had been, until the 15th Century, one of the wealthiest countries in Europe with an income 15 times higher than Paris, Madrid, or Rome. A tiny country on the Adriatic sea with trading posts all over the Mediterranean, it was a dominant political force and one of the most important commercial ports, to which ships from the Orient came loaded with spices and luxury products that Venice resold all over Europe.

In the 16th century Italy became a battlefield where Henri II of France and Charles V of Spain fought ferociously. Venice resisted and did not submit but after fighting seven wars between 1396 and 1718 with the very powerful Ottoman Empire, and with the introduction of vigorous competition from the new sea routes created by Spain, France, and Portugal, her decline was unavoidable. The Mediterranean had became less important than the Atlantic after Christopher Columbus discovered America and Vasco da Gama had travelled around Africa and the Cape of Good Hope. 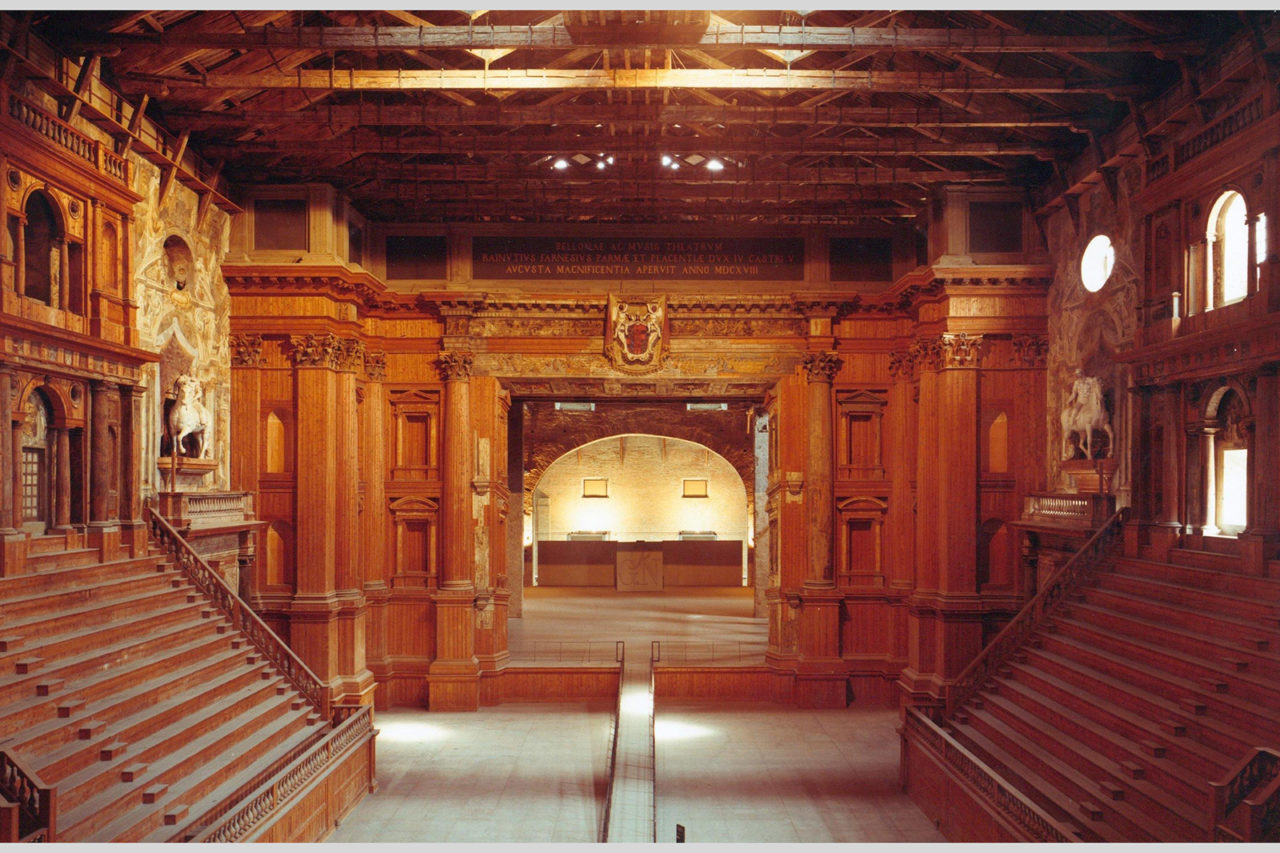 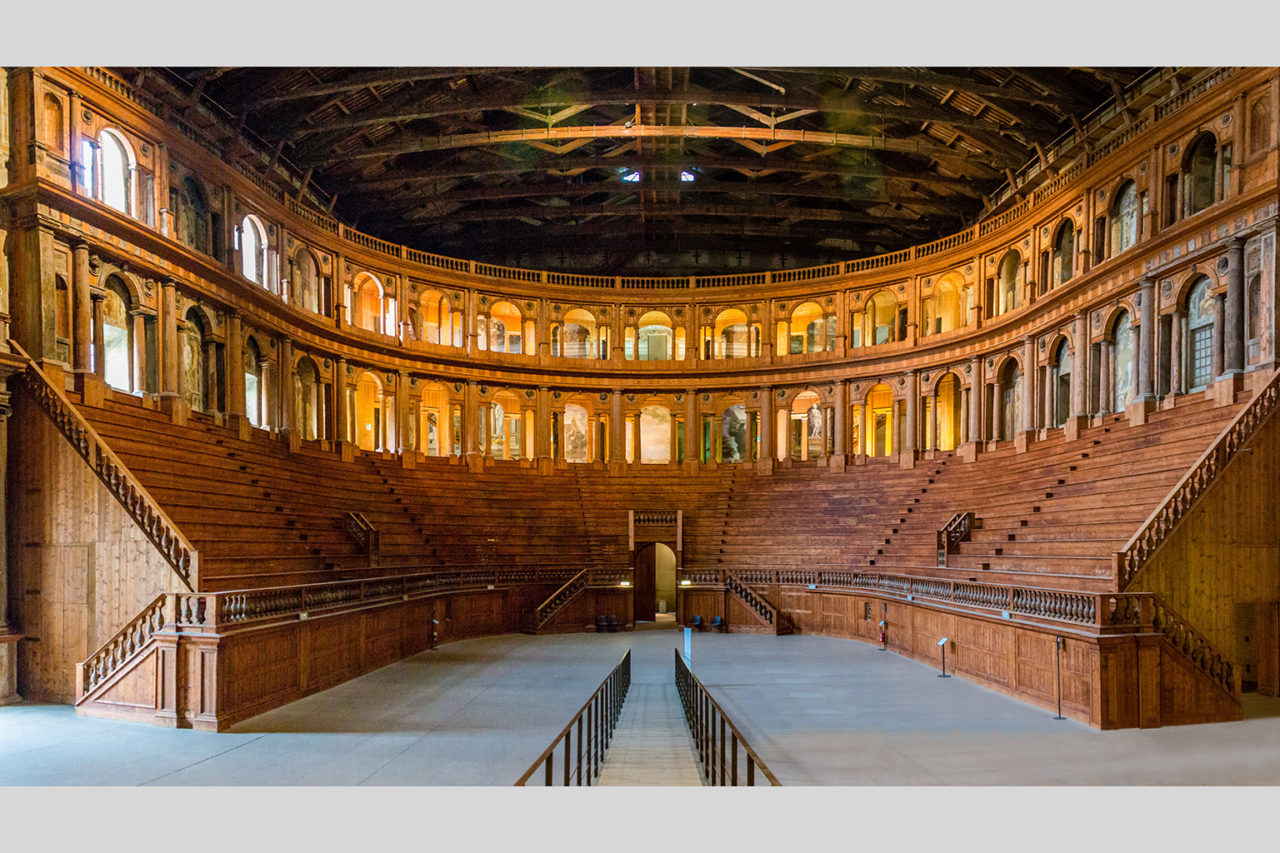 In the meantime, however, Venice offered unique freedoms. The Carnival was a Venetian invention that enabled the rich and the poor to be equals for a few days each year, and allowed some license under the cover of masks. Freedom included—as it always does—the possibility of intellectual curiosity. It was with the addition of great affluence that Venetian merchant princes who wanted to ensure their legacies could commission great artists to celebrate their glories. Increasing global consumption allowed Venice to maintain its substantial income until 1560. Though it would no longer be a dominant political or military power, Venice enjoyed a cultural supremacy in which the arts and—rather importantly—architecture flourished. In 1545 Sebastiano Serlio published his Trattato di architettura, a work that concentrated on the practical stage of the time. 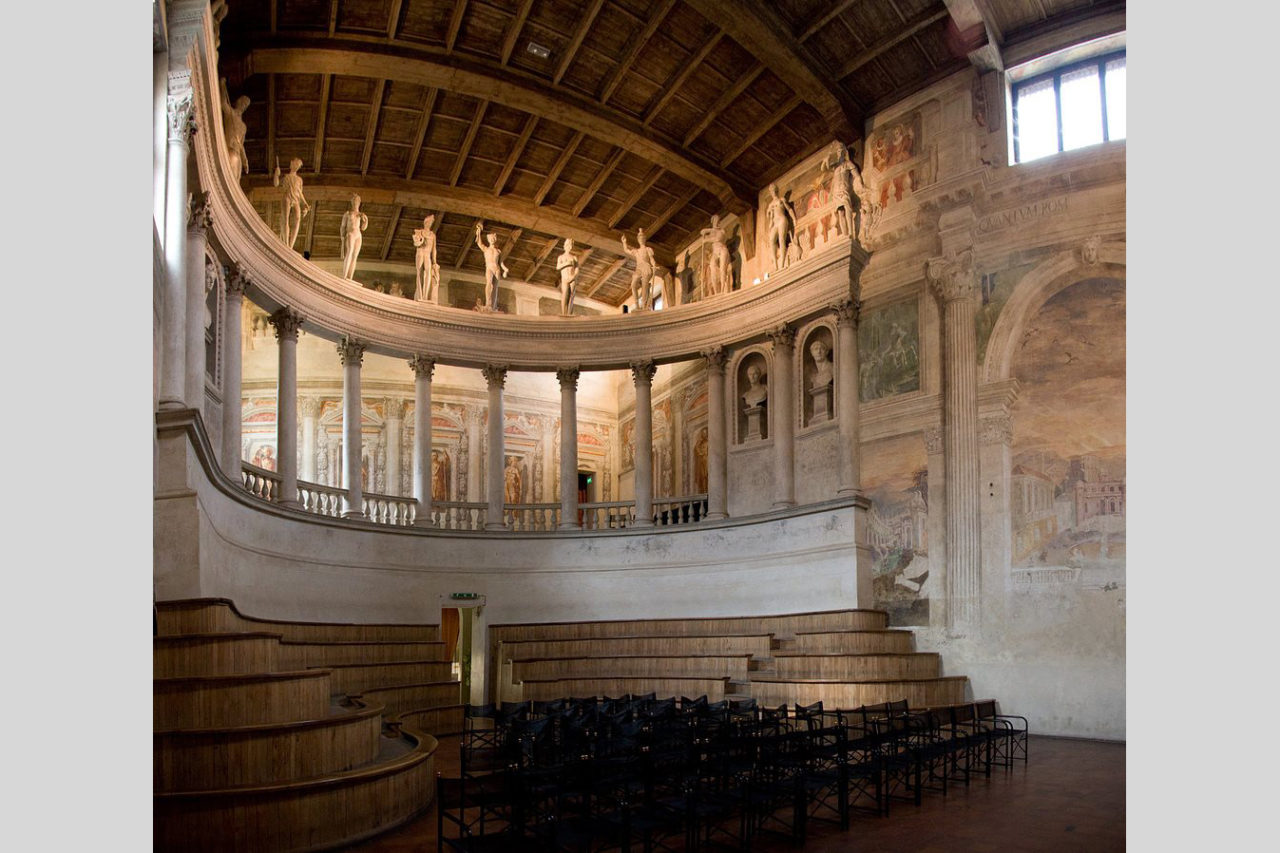 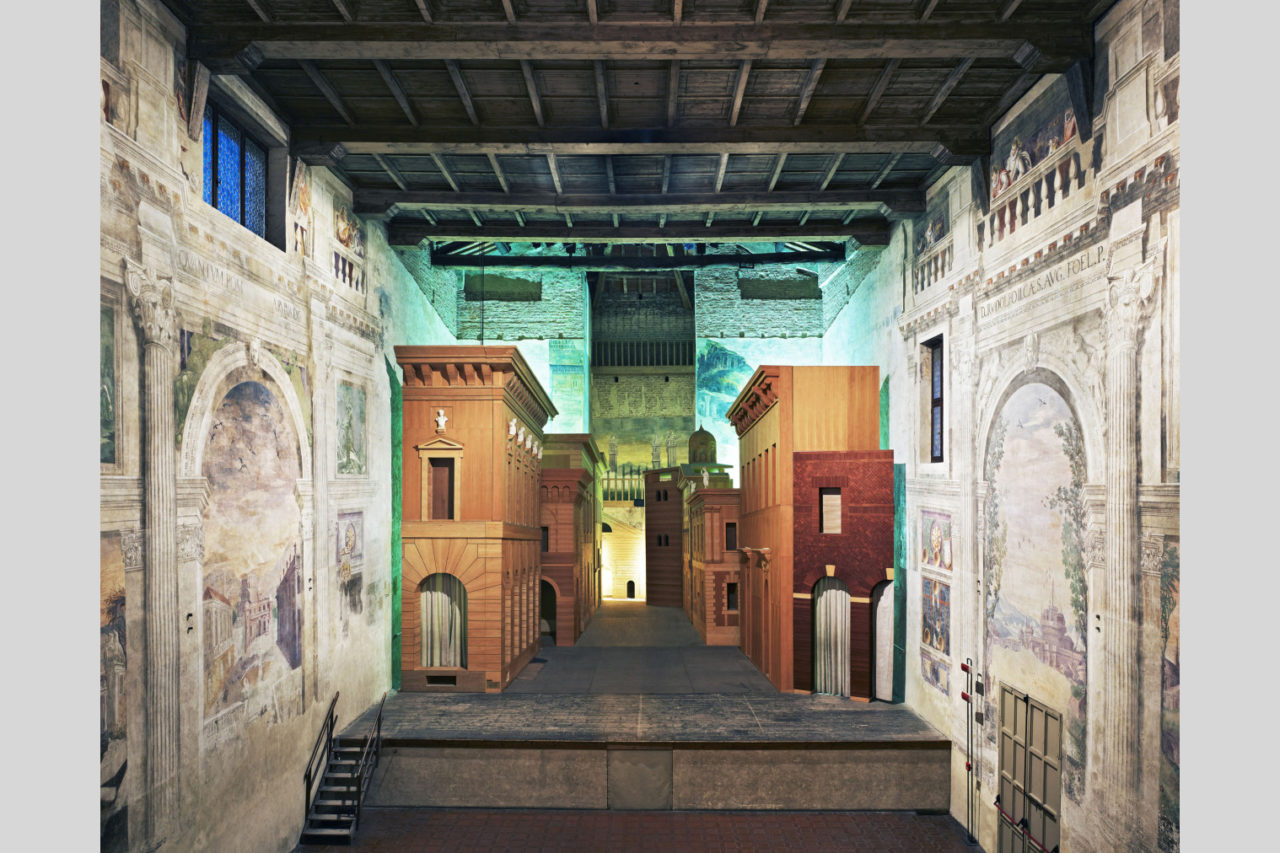 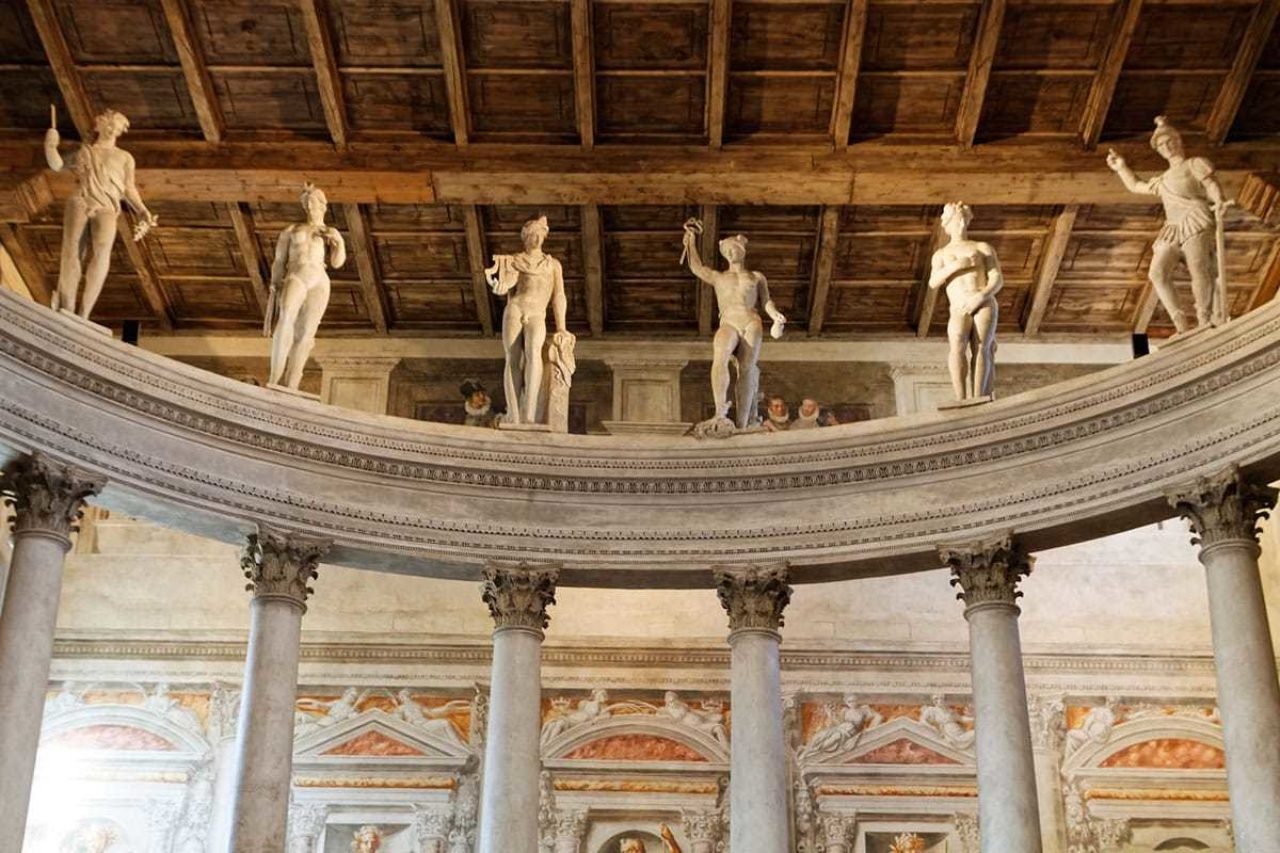 An excerpt from the Encyclopedia Britannica by authors George C. Izenour, Howard Bay, and Clive Barker sums up the principles of this major treatise.

Serlio’s treatise on the theatre had three especially significant items. The first was a plan for an auditorium and stage that assumed a rectangular hall, with spectators arranged in the same pattern as in the Roman cavea (i.e., the tiered semicircular seating area of a Roman theatre), the difference being that the semicircle of the audience was cut short by the sidewalls. Second, his three types of stage designs—tragic, comic, and satiric—were the same as Vitruvius’ classifications. Third, for the stage, he started with a Roman acting platform, but instead of the scaenae frons, he introduced a raked platform, slanted upward toward the rear, on which the perspective setting of a street was made up of painted canvases and three-dimensional houses. Since the perspective required that the houses rapidly diminish in size with distance, the actors were able to use only the front houses. Serlio used three types of scenes, all with the same basic floor plan. Each required four sets of wings (i.e., the pieces of scenery at the side of the stage), the first three angled and the fourth flat, and a perspective backdrop.

The Accademia Olimpica in the little town of Vicenza, near Venice, commissioned a famous late Renaissance architect, Andrea Palladio, to design a theatre. This, the Teatro Olimpico, was the first permanent modern indoor theatre, and it has survived intact. Palladio thoroughly researched his subject (the outdoor classical theatre of Rome) and without knowing it designed something now considered very close to a Roman odeum. It is a scaled-down version of an outdoor Roman theatre, with shallow open stage and a heavily sculptured, pedimented, permanent background. A colonnade of heroic proportions, surmounted by sculptured figures, surrounds a steeply stepped bank of seating. Overhead is a painted sky. To promote an intimate stage–auditorium relationship, he used a flattened ellipse in planning the seating, rather than the classic half circle. The interior was to be lit by tallow candles mounted in wall sconces. Palladio died before the building was finished, and his follower Vincenzo Scamozzi completed the work in 1585. Behind the five stage entrances (attributed to Scamozzi) are static, three-dimensional vistas of streets receding to their separate vanishing points; it is not certain whether this was the intent of the original design. In performance, the theatre is efficient if the auditorium is full, and speech carries quite well because of the small volume, flat ceiling, modulated sidewalls, excellent vertical sight lines, and direct hearing lines from all seats to the stage. The exterior is an ungainly, masonry-walled structure with a wood-trussed, tiled roof.

In 1588–89 Scamozzi designed the Teatro all’Antica, a small court theatre for the Gonzaga family at Sabbioneta. Unlike the Teatro Olimpico the stage here is a single architectural vista behind a shallow-raked open platform, after the manner of the stage illustrated by Sebastiano Serlio. At Sabbioneta a divided horseshoe-shaped bank of seating leaves an empty arena, at floor level, in front of the stage. This space, backed by the permanent bank of seating, can be used for additional seating, but it also accommodates other uses and paves the way for the most famous and influential of all Renaissance theatre buildings, the Teatro Farnese.

The Teatro Farnese lies about 12 miles west of Sabbioneta at Parma, in a palace of the Farnese family. The theatre, designed by Giovanni Battista Aleotti and built in 1618 (but not used until 1628, to celebrate the marriage of a Medici daughter to a Farnese son), was the first proscenium theatre to be designed for movable scenery and is the earliest large-scale indoor theatrical facility to have survived. It was severely damaged by fire bombing in World War II but has since been restored to its former glory. There has also survived an extensive catalog giving details of events held there, including some contemporary comment on performances. The catalog describes the variety of uses to which the theatre was put: drama, opera, and ballet were performed on stage; equestrian acts and sumptuous balls were held in the spacious arena between stage and seating, which could also be flooded to a depth of two feet and used for mock naval battles; and, in addition, the theatre accommodated such court ceremonies as ambassadorial receptions, proclamations of state, and princely extravaganzas. The Teatro Farnese has windows (as did the Teatro Olimpico and the Teatro all’Antica at Sabbioneta before it) behind and above the banked seating, which helped to illuminate the space during daytime use; tallow candles or animal-fat lamps, in wall and overhead fixtures, were the only source of nighttime illumination for this and all interior theatres until the introduction of gas lighting in the 19th century. The Teatro Farnese set the style for stage and auditorium design over the next 250 years, with the exception of the courtyard-patio (corrales) theatre in Spain and the Elizabethan and Jacobean theatre of England.