Balusters and balustrades are such a familiar element of the classical vocabulary that we can easily assume they are an ancient form. It thus may come as a surprise to learn that balusters as we know them are a Renaissance development and were unknown in ancient times. As I noted in my Classicist Blog essay on Roman lattice, the standard railings used by the Romans normally had crisscross panels and sometimes were referred to as transennae or clathri. They developed from wooden construction and were frequently interpreted in bronze and marble. We are unsure exactly when the first Renaissance balusters appeared and by whom they were developed. The idea may have evolved from the simple columnar balusters such as those on the façade of the Pitti Palace in Florence, begun in 1448. However, one of the earliest examples of the use of shaped turned balusters is seen surrounding the drum of the Tempietto, the tiny domed shrine designed by Donato Bramante and built ca. 1502. Located in the courtyard of Rome’s monastery of San Pietro in Montorio, the Tempietto marks the traditional site of St. Peter’s crucifixion.

The Tempietto was so admired by Andrea Palladio that he included his elevation drawing of it in his famous 1570 treatise I Quattro Libri. (Fig. 1) Palladio’s image clearly shows the form of the Tempietto’s balusters, sometimes called a double or symmetrical baluster, which means it has vertical symmetry with its bulbous sections stacked vertically opposite one another. We can only speculate as to Bramante’s source for this form but a likely candidate is the Roman candlestick. A depiction that may have been known to Bramante is seen in the frieze of the Temple of Portunus, across the Tiber from the Tempietto.[i] The frieze of this Republican-era temple was well known during the Renaissance. Among the most accurate interpretations of it is found in Antoine Desgodetz’s 1682 treatise, Les Edifices Antiques de Rome. (Fig. 2) Desgodetz was able to produce his recording drawing while the frieze was more intact. Only a small, badly eroded fragment remains today but it has the Roman candlestick form in place. 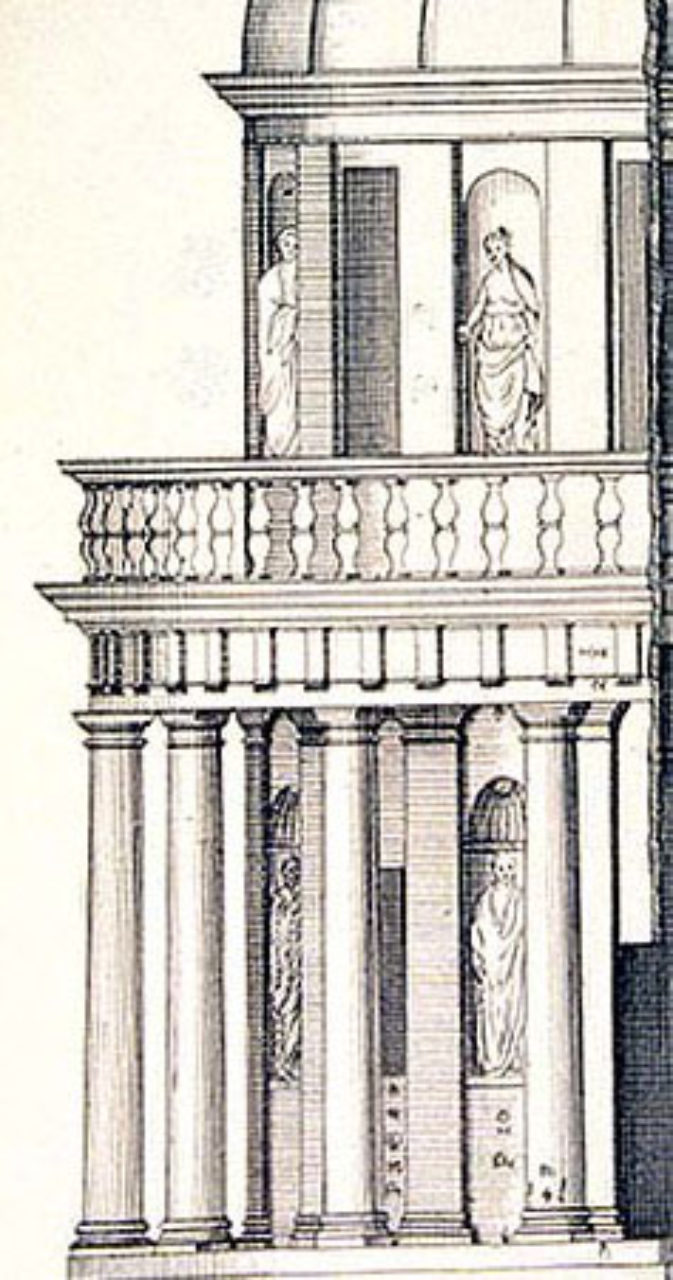 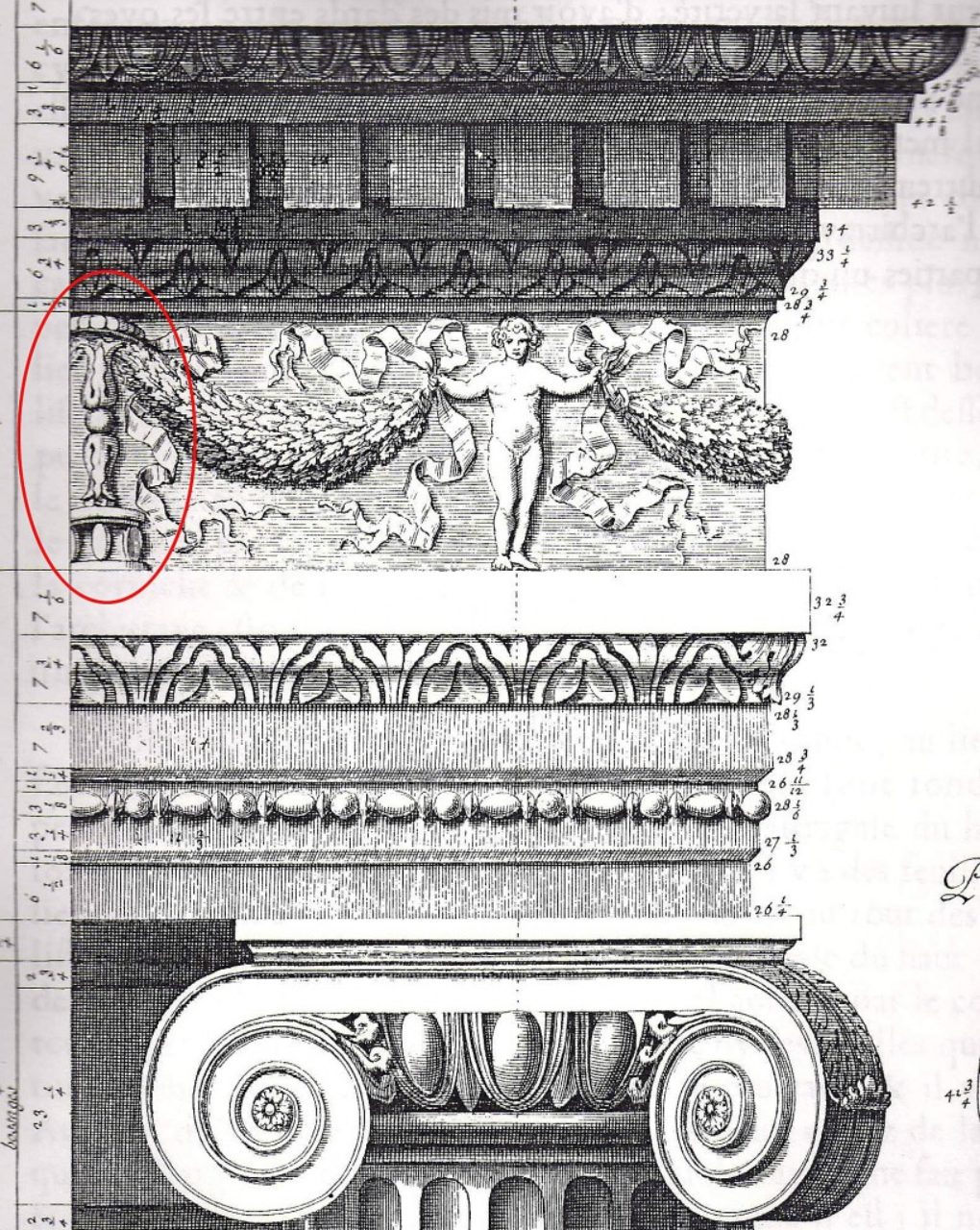 Bramante’s Tempietto balusters provided a prototype for untold numbers of balustrades for the next five hundred years. Not only did it receive widespread notice through Palladio’s image, instructions on its design and illustrations of variations on its turnings appeared in numerous other architectural treatises and pattern books. Among the more influential of the 18th-century treatises was James Gibbs’s Rules for Drawing the Several Parts of Architecture (1732) where he provides detailed drawings of versions of the form. (Fig. 3) Illustrations such as these and earlier ones provided the design source for many types of the double baluster, even in remote areas of the English speaking world. We find a slender depiction of the double baluster in the stair railing of the early 18th-century Lynnhaven house in Virginia Beach, Virginia, a simple vernacular dwelling. (Fig. 4) 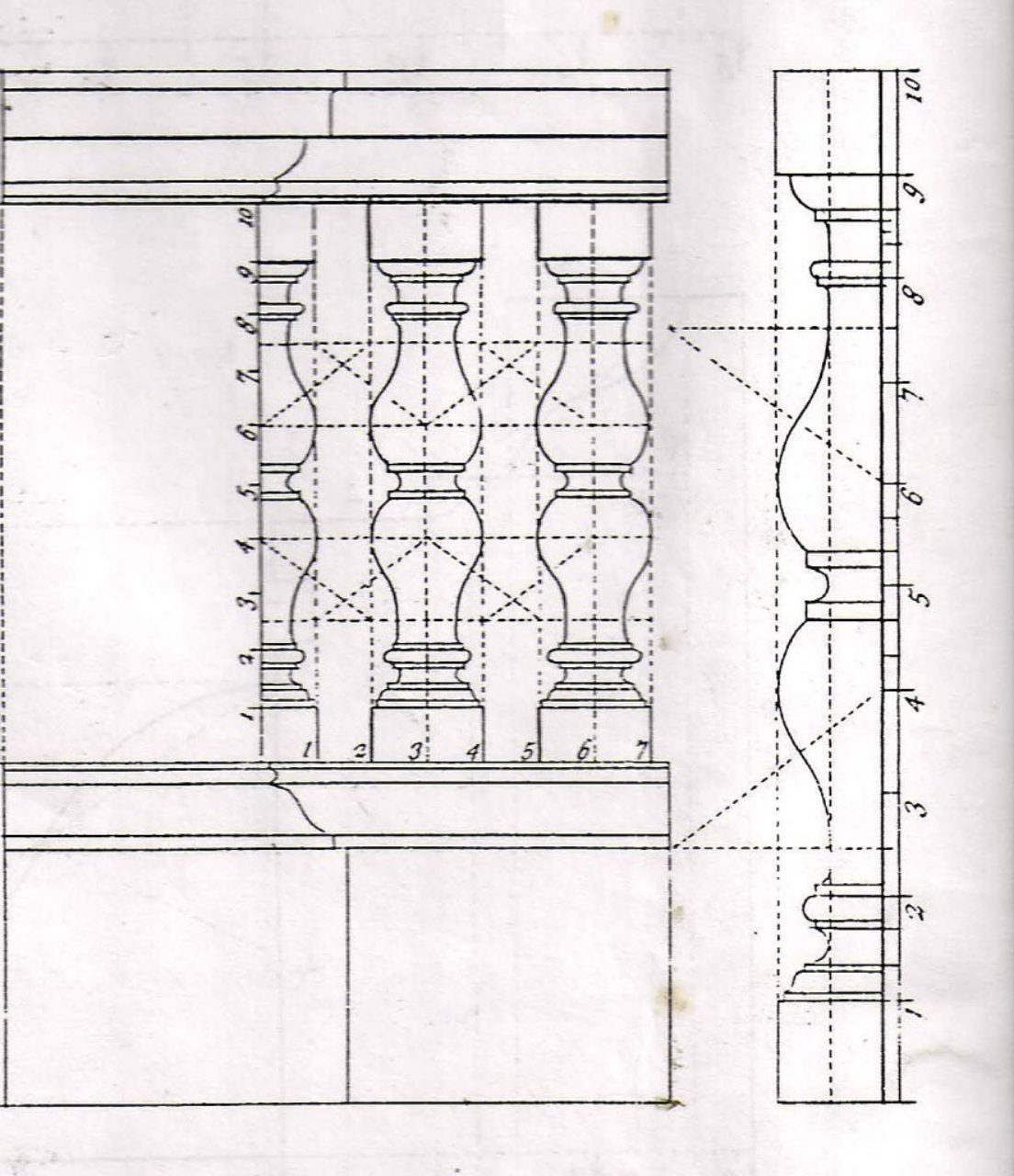 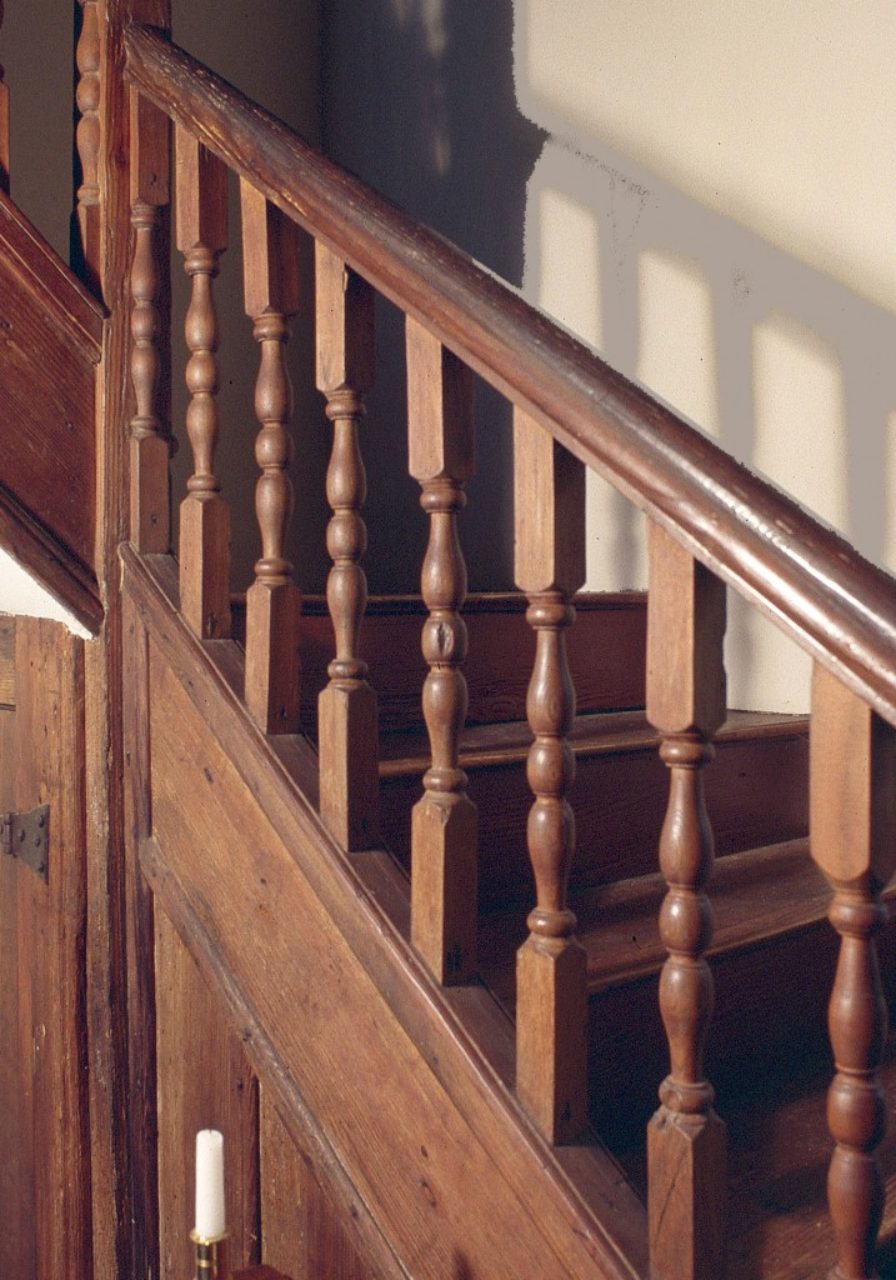 The firm of McKim, Mead, and White gave us examples of the double baluster in two of their more conspicuous works. The firm’s 1906 building for Tiffany & Co. on New York’s Fifth Avenue employs a double baluster railing at its second-floor level. (Fig. 5) The Tiffany building’s design is based on the Palazzo Grimani in Venice, which has a similar (but not identical) railing at its second floor level. One of the firm’s later works, the Arlington Memorial Bridge in Washington, D.C., completed in 1932, has double-baluster balustrades on both the bridge itself as well as on the approach guards. (Fig. 6) The Tiffany building’s balusters are marble whereas the more robust Memorial Bridge balusters are gray granite. 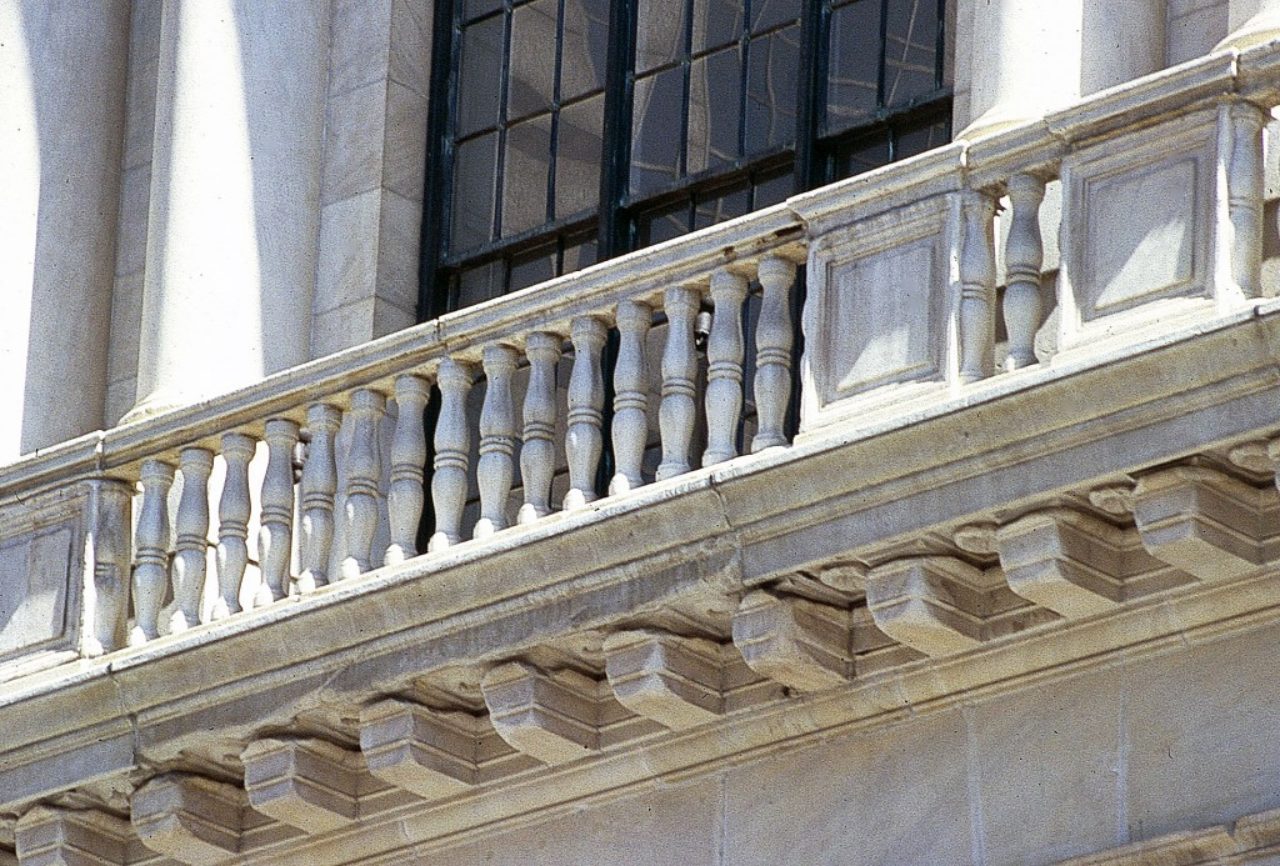 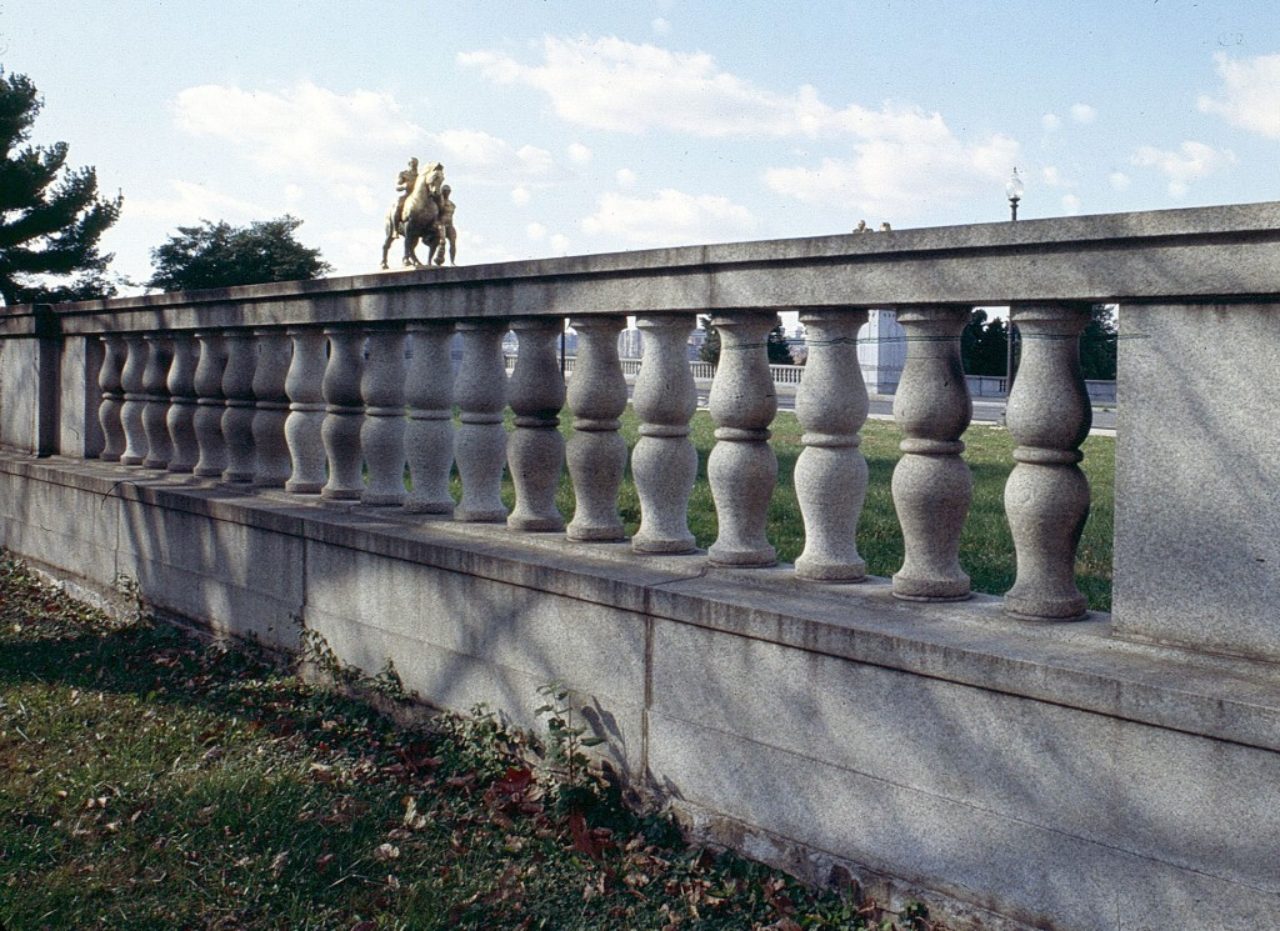 The more familiar Renaissance baluster form is the single baluster or a baluster with only one swollen section or belly, lending it a bulbous vase form. Like the double baluster, scholars generally agree that the single baluster form was inspired by Roman candlesticks such as that included by Giovanni Battista Piranesi in his 18th-century engraving of fragments of a Roman sarcophagus. (Fig. 7) It is this shape that gives us the name for the type. The word baluster is derived from the Italian word balaustro, which is the term for the flower bud of the pomegranate tree. (Fig. 8)[ii] 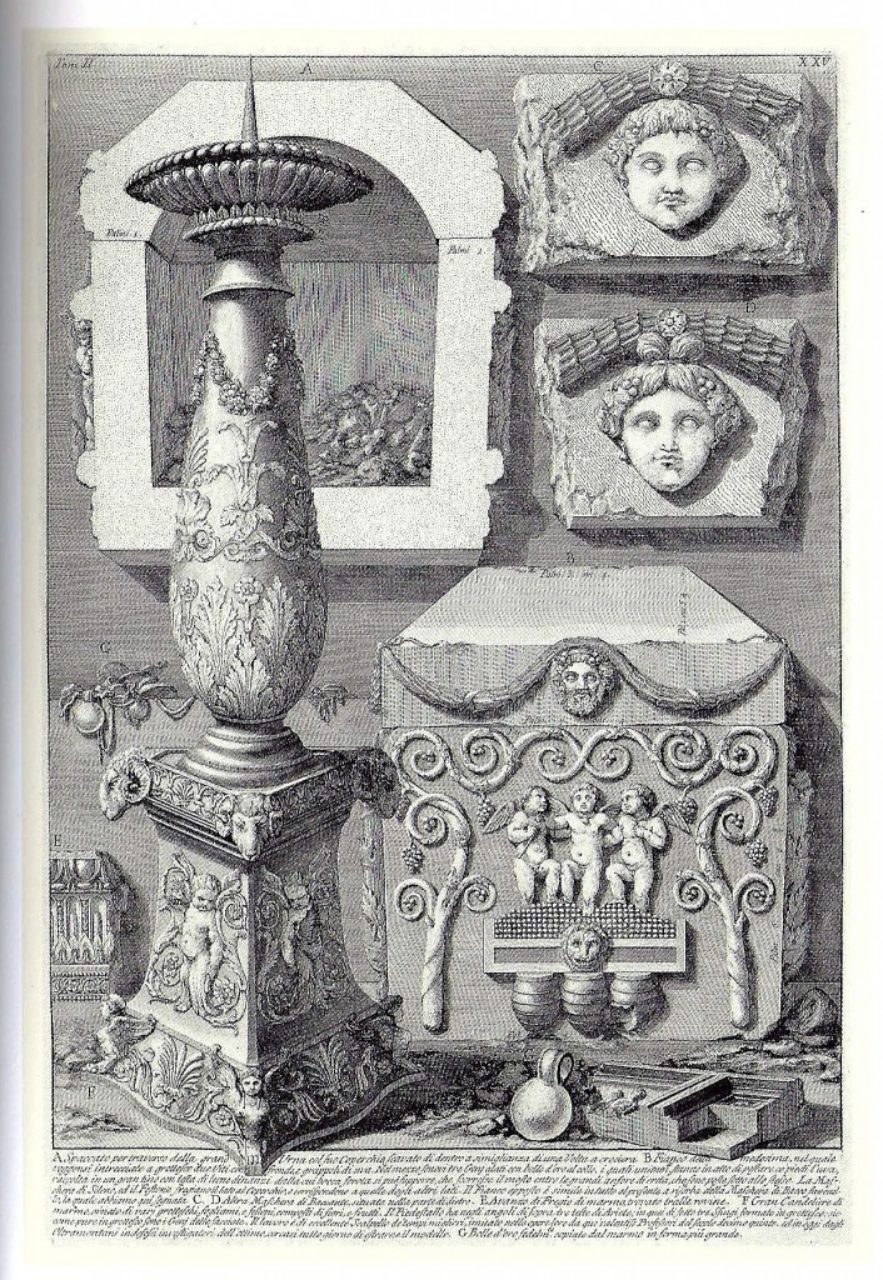 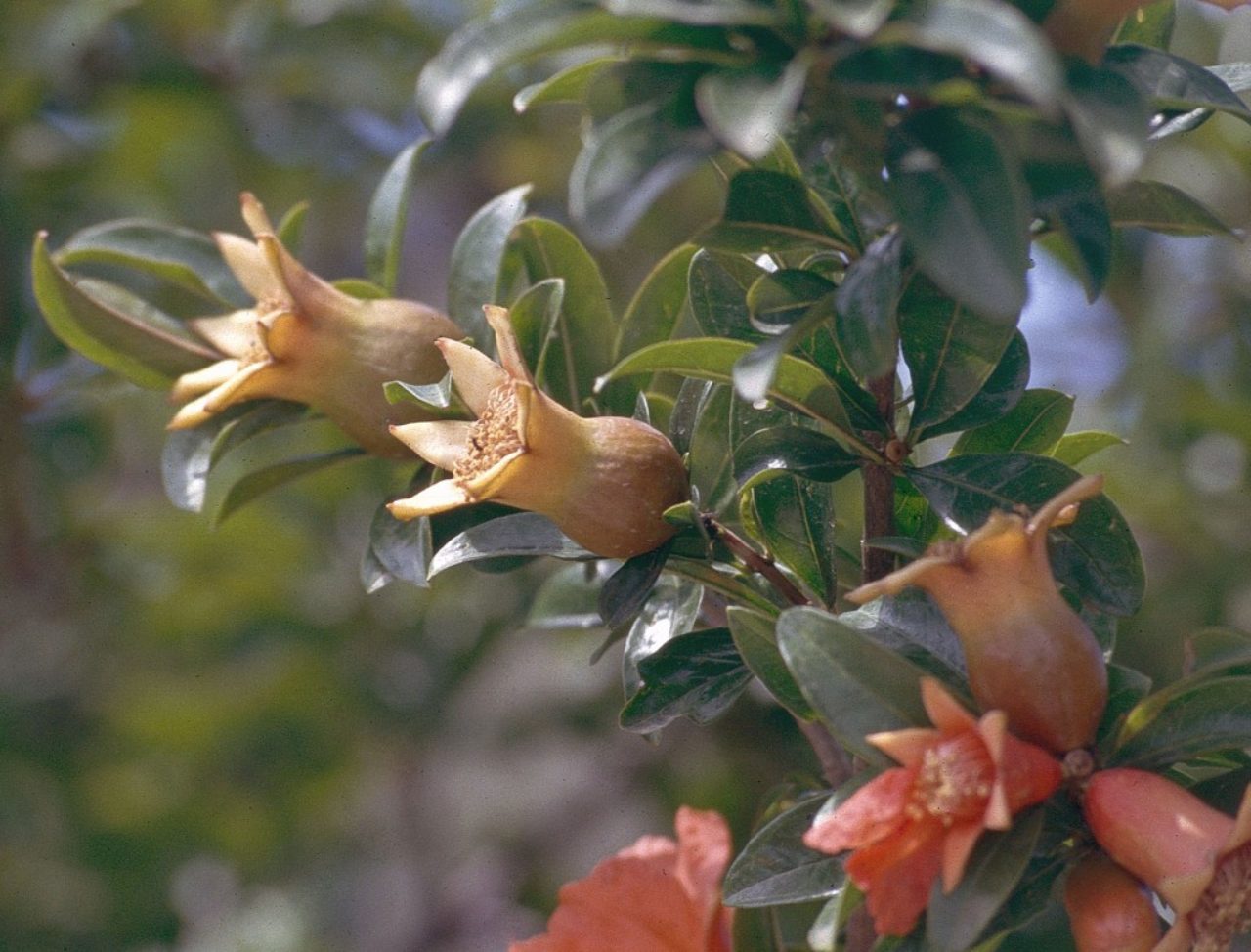 The single baluster became widely popular from the Renaissance to the present and is the dominant baluster form albeit with scores of subtle variations. Interestingly, Palladio incorporated either the double baluster or the single baluster in his works with no particular preference. In his Loggia del Capitaniato he used both; the single baluster embellishes the balconies while the double baluster forms the balustrade above the entablature. (Fig. 9) More full-bodied single balusters are found a short distance away in Vicenza, on the railings of the Ponte San Michele dating from the 1620s. (Fig. 10) Of course, the irrepressible Francesco Borromini could not refrain from putting his own spirited spin on the form: in the cloister of San Carlo alle Quattro Fontane (1646), Borromini alternated upside-down balusters with rightside-up ones, all with chamfered concave bellies. (Fig.11) 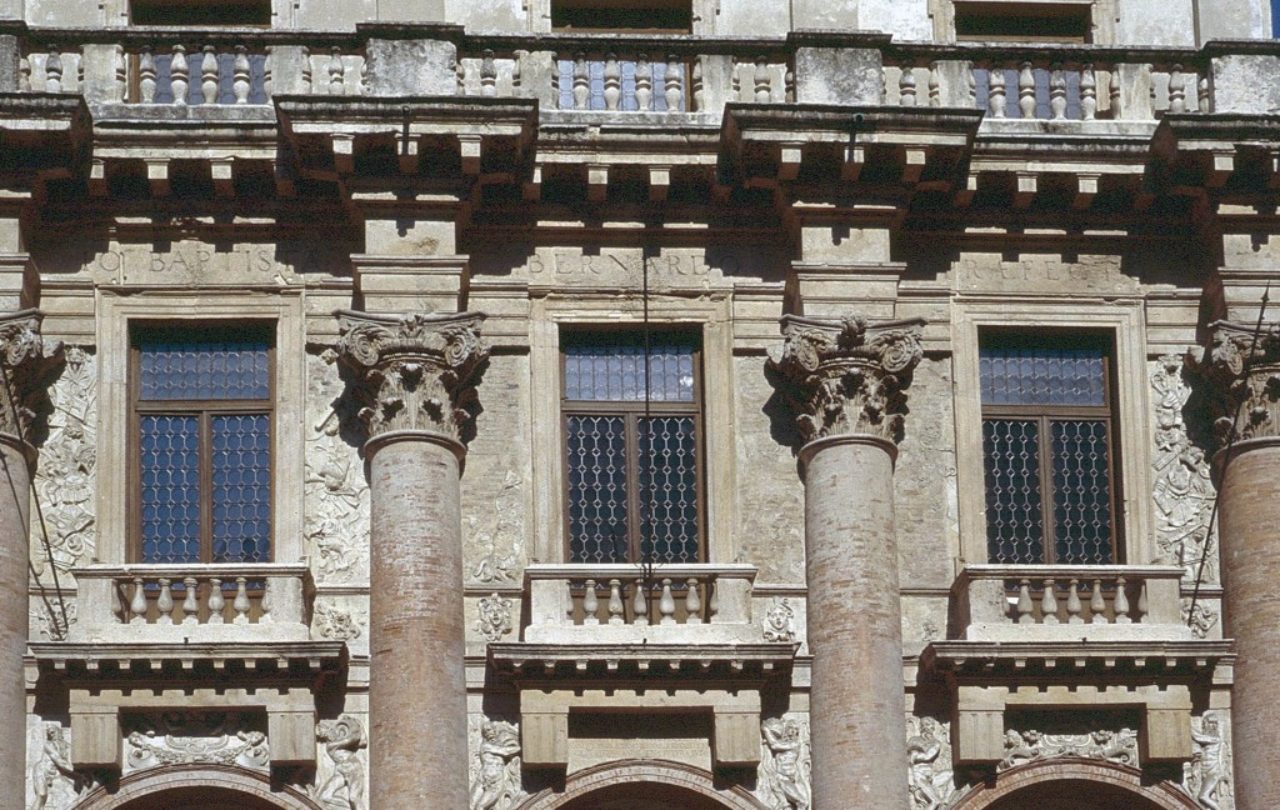 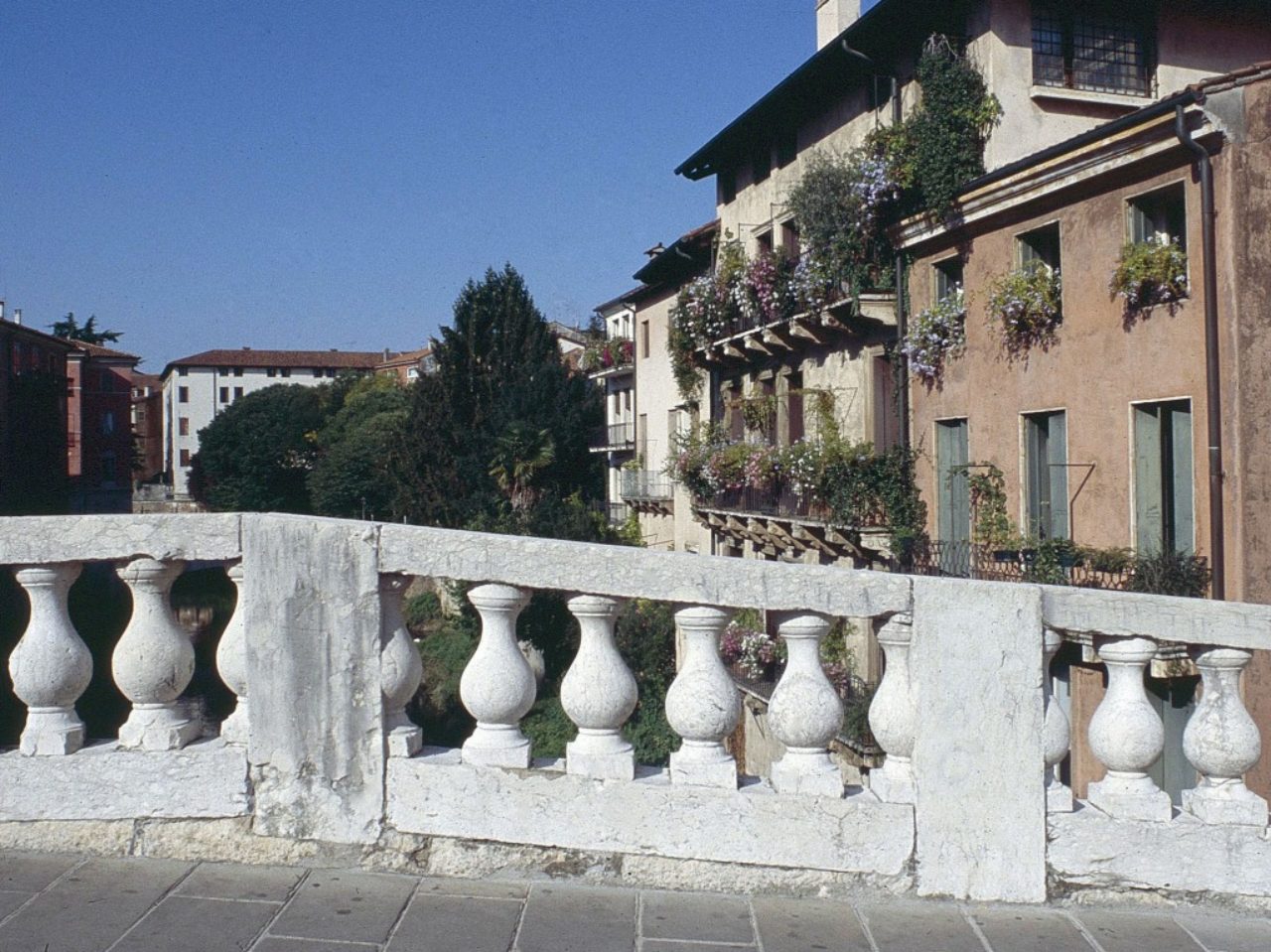 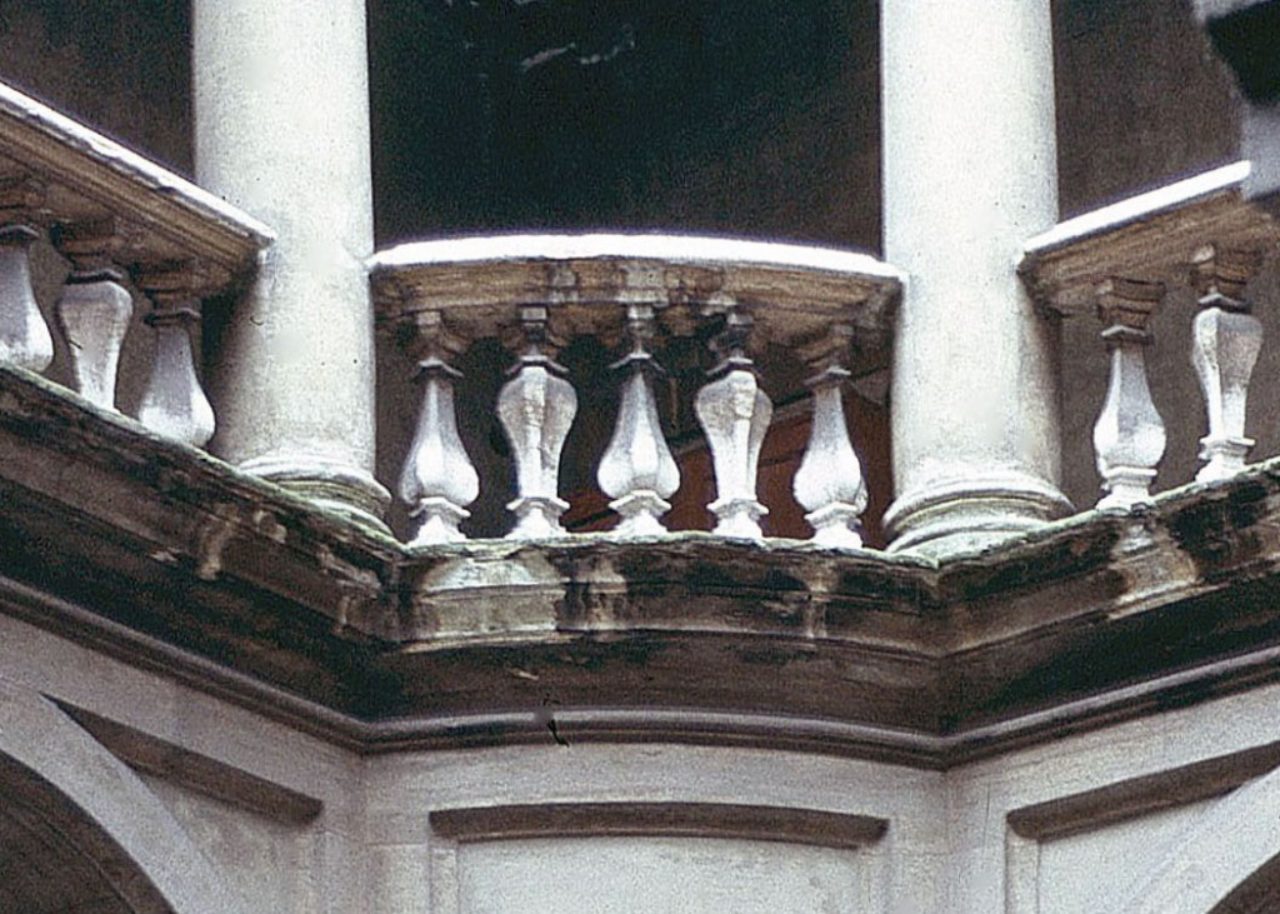 James Gibbs also gave us detailed illustrations for proportioning single balusters of varying complexity. His illustration for the more standard type shows the correct form for ending a row of balusters against a pedestal. (Fig. 12) The row is stopped with a half baluster, a nicety that many modern builders and architects overlook. Thomas Jefferson followed this rule on the balustrade at Monticello, however, Jefferson economized by making flat profiles of the balusters that are set against the dome. (Fig. 13) At Redlands, the 1792 home of Jefferson’s neighbor, John Carter, we find an elegantly carved baluster used for the stair newel. The balusters of the stair railing employ a stretched-out baluster on top of a more normal proportioned baluster, one of the many, many variations of the baluster as adapted for stair railings.[iii] (Fig.14). Oftentimes, however, the longer element in such a railing is expressed not as a skinny baluster but as a thin Tuscan column. 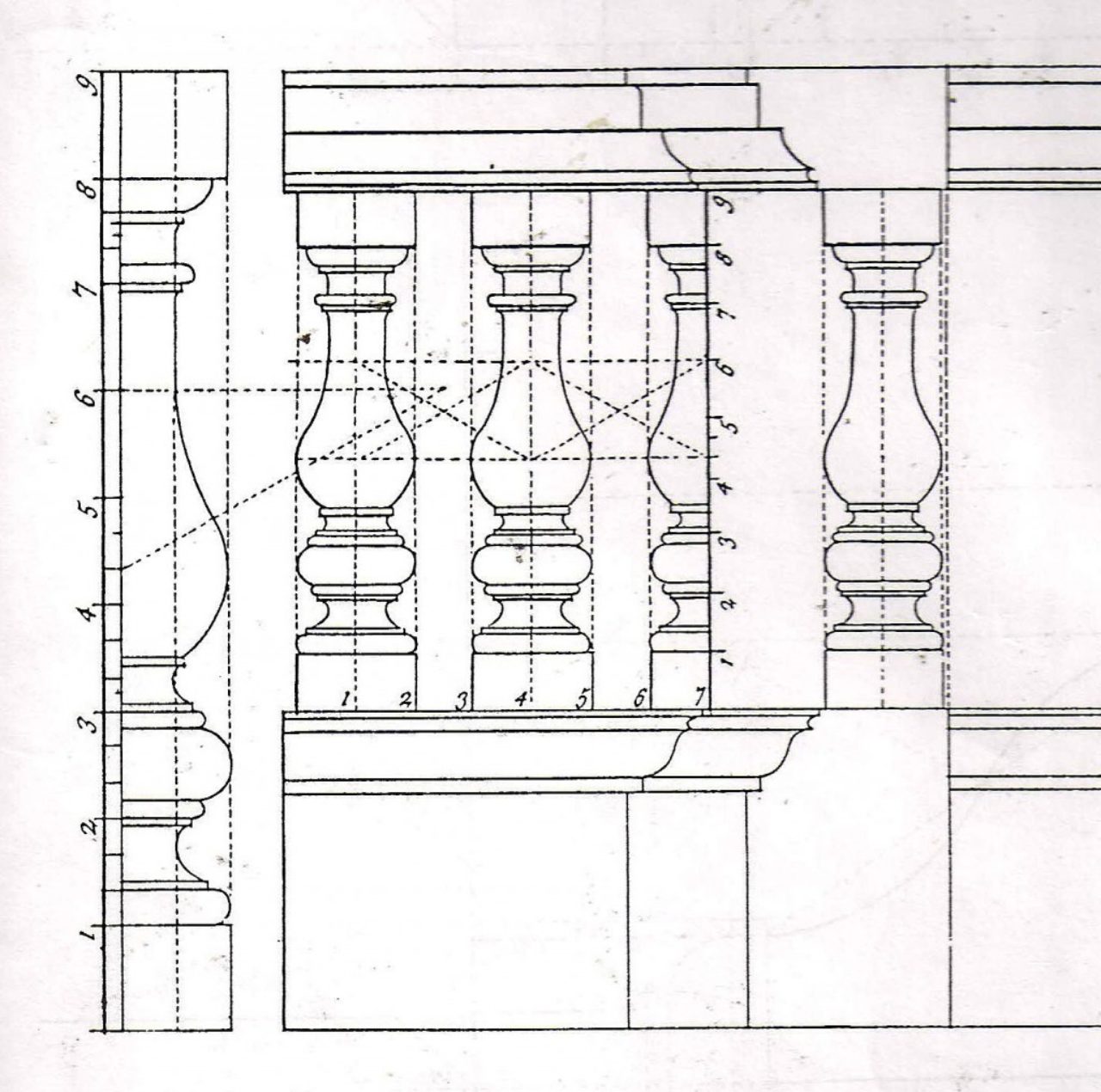 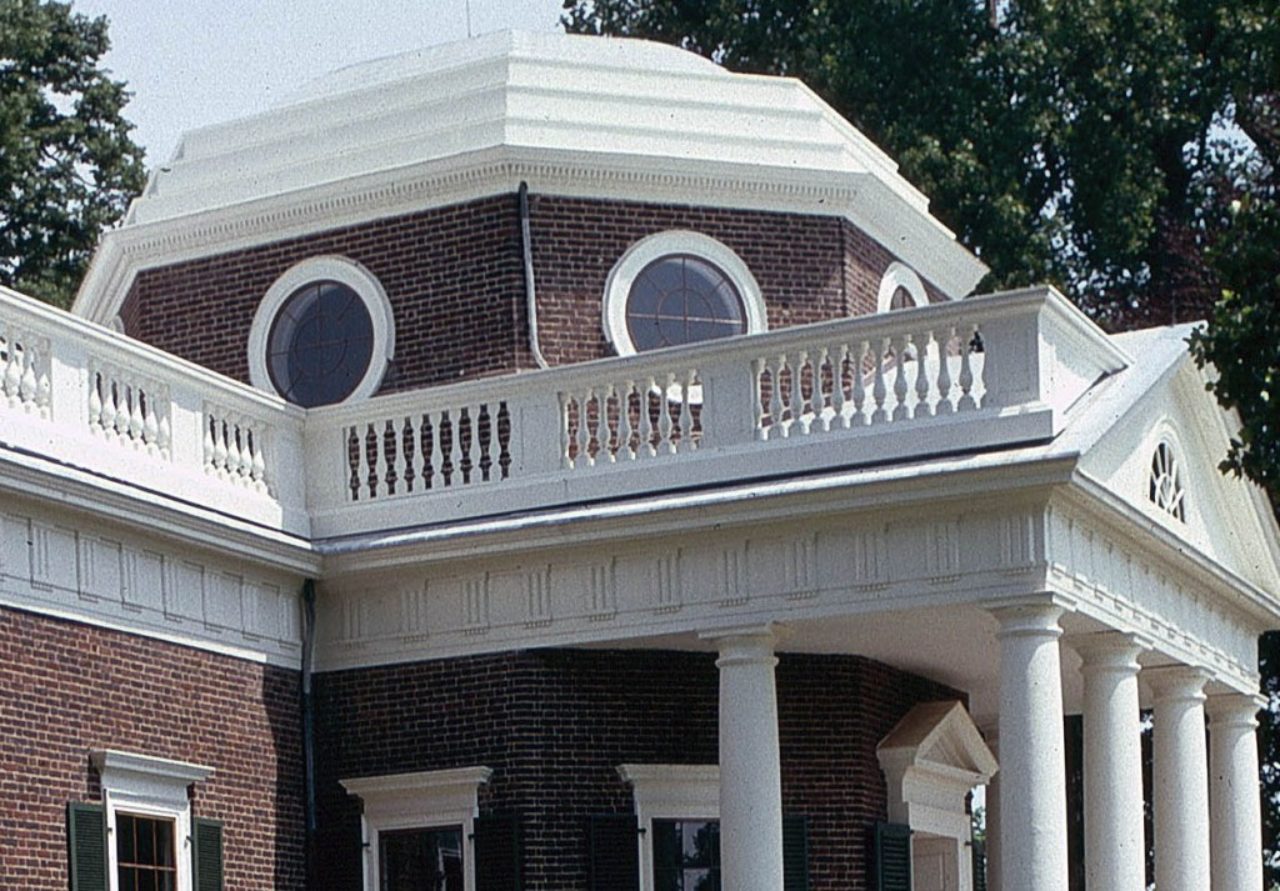 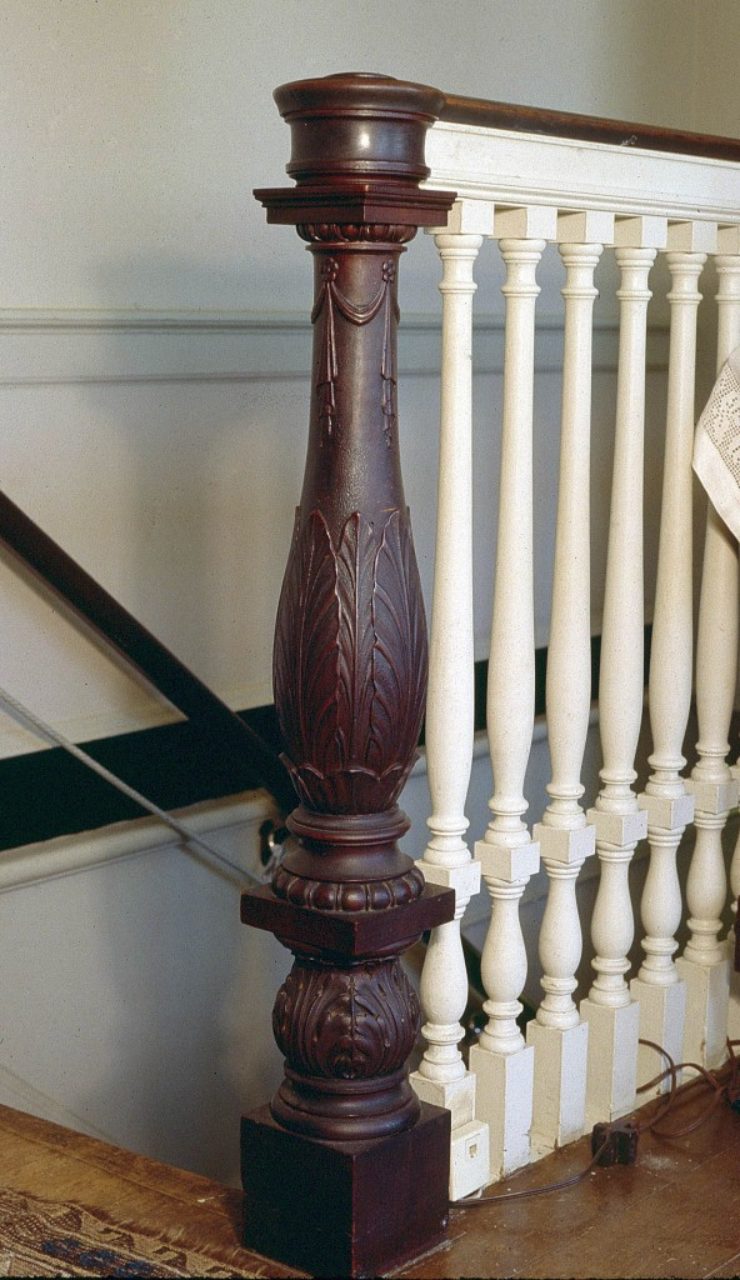 Done correctly, the single baluster can be an elegant accent for a classical-style building. The balustrade on John Russell Pope’s 1935 extension to the Frick Collection complex in New York is a demonstration of how visually satisfying a properly executed balustrade can be. (Fig. 15) Likewise, cheap, off-the-peg metal versions spurted out by builder supply companies trivialize this fine traditional form. (Fig. 16) 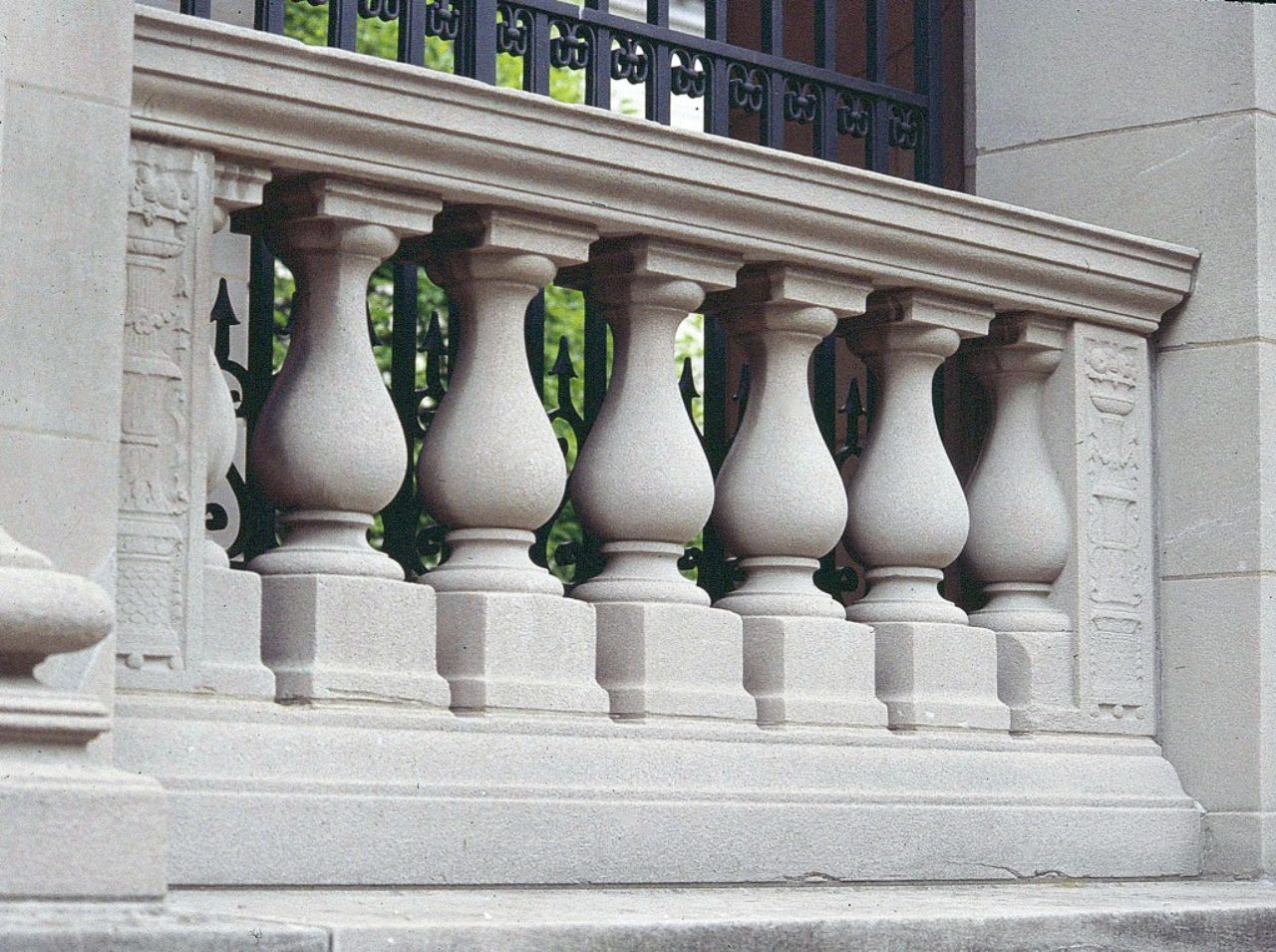 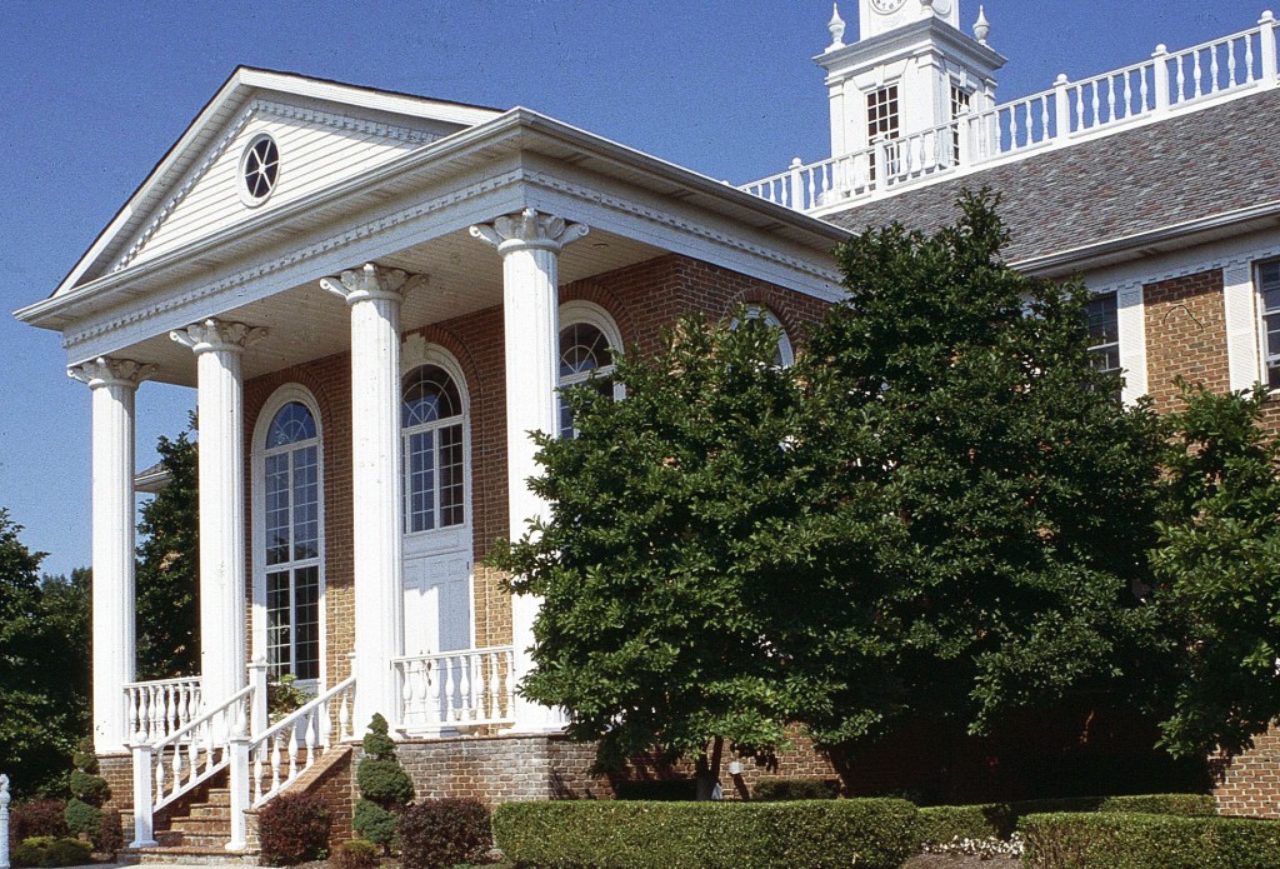 [i] Desgodetz and others, including Palladio, incorrectly referred to the temple as the Temple of Fortuna Virilis. Modern scholars have identified it as the Temple of Portunus. [ii] According to the American Heritage Dictionary of the English Language, the term can be traced back to the Latin balaustium and the Greek balaustion. [iii] Balustraded stair railings are also referred to as banisters. The term is a variant of baluster.